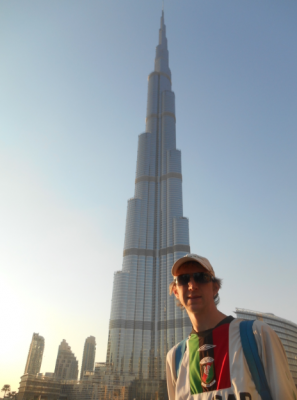 As of today the worlds highest building is the Burj Khalifa in Dubai, United Arab Emirates. As a backpacker in Dubai there was no way I was going to pay the ridiculous price tag of $30 US Dollars to go “to the top”. There’s even an irony there as “the top viewing platform” isn’t even anywhere near the top – it’s on the 124th floor (out of 163) I believe!! I probably shouldn’t give them free publicity on here, so I won’t post it as a link but here’s the site for booking this expensive journey to “At the Top of the Burj Khalifa” if you’re a rich backpacker. http://www.burjkhalifa.ae/en/ObservationDeck/TicketInformation.aspx . 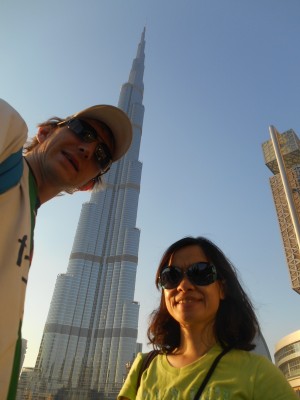 Outside the Burj Khalifa in Dubai, UAE

What’s even worse is that if you don’t book it in advance they charge you even more, rumours that it can cost as much as $100 US for the 60 minute trip to the top which isn’t even the top. $100 US? I could backpack in Iran for 2 weeks easily on that!! 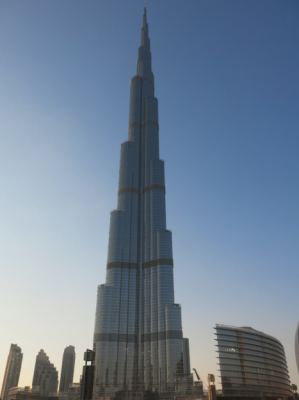 The stunning Burj Khalifa in Dubai – the world’s highest building.

But luckily I’m on hand to do it the FREE way. So unless you blag one of those tickets for free, work there or live there this leaves you with two free backpacking options for the Burj Khalifa in Dubai:

1. Foot of Burj Khalifa by Dubai Mall
Just go to the bottom of the Khalifa. It can be accessed easily from Dubai Mall (itself the world’s biggest shopping mall). You can get awesome views of the Khalifa from here. Here are some of our photos from the foot of the Khalifa, day and night and yes, of course I’ve tried turning them round the right way, but I’ve spent hours on it and they still come up horizontal.

Daytime at the base of the Burj Khalifa: 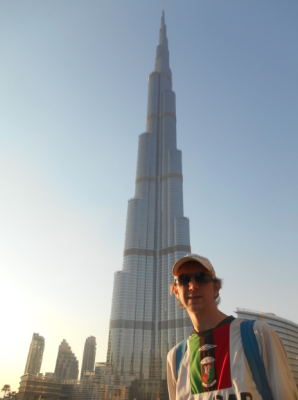 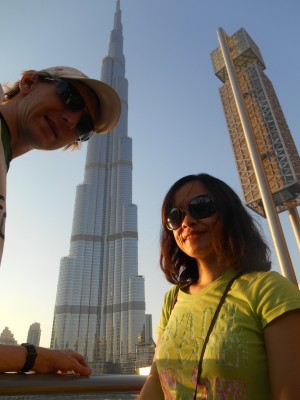 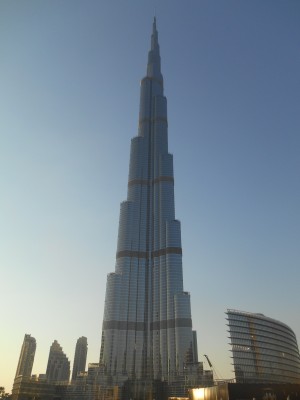 Night time at the base of the Burj Khalifa: 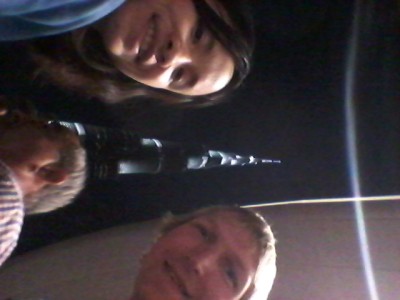 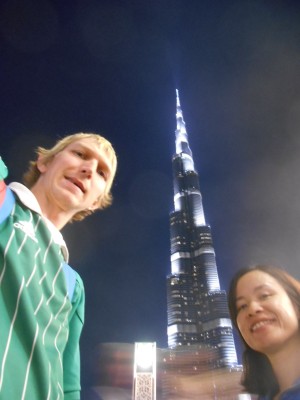 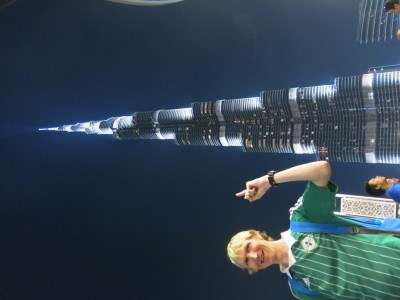 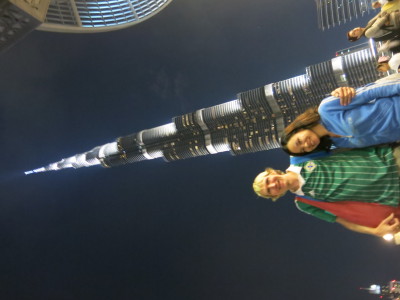 2. Armani Hotel, Floor 9
Go to the Armani Hotel and actually go inside the Khalifa for free. This gets you as far as the 9th floor and you can look out at the world knowing you have been inside the world’s highest building! To get to the Armani Hotel, you have to follow the path away from Dubai Mall and up the slope into the reception, you can then get the lift up to as far as they let you – when we were there – we could get up to the 9th floor. We didn’t stay for a drink though as it was too dear. Here are some photos from the Armani Hotel. I also sneaked in behind the bar for a cheeky shot too. 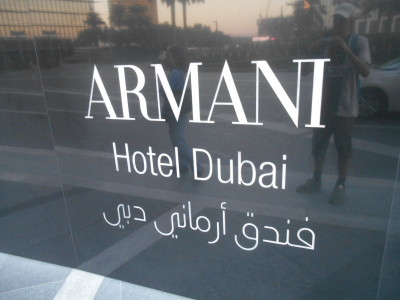 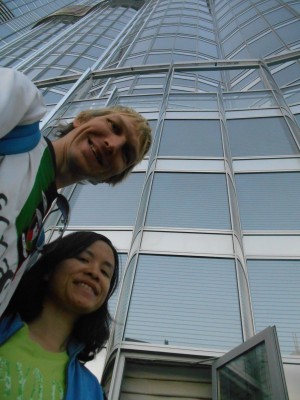 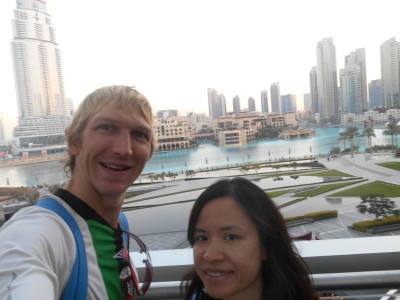 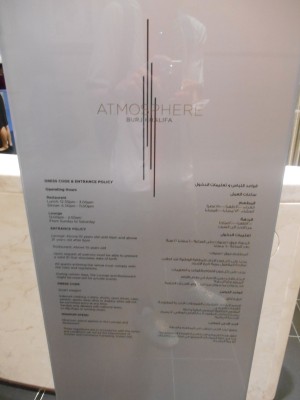 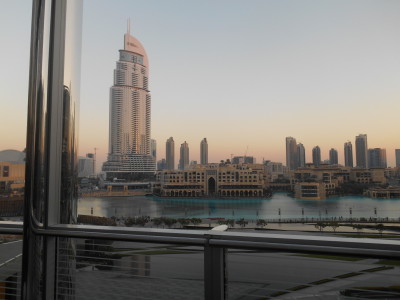 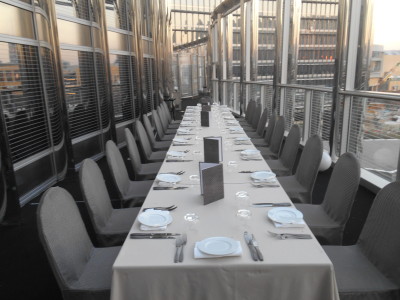 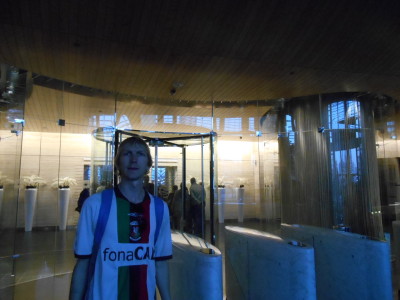 So we obviously went for both options, as they were both free. We also decided to head to the Burj Khalifa both day and night to get different views of it. At night you also get free light shows, water shows/fountains and occasional music shows and that is all free of charge at the foot of the Burj Khalifa. Here are a few more photos from in and around the Burj Khalifa. 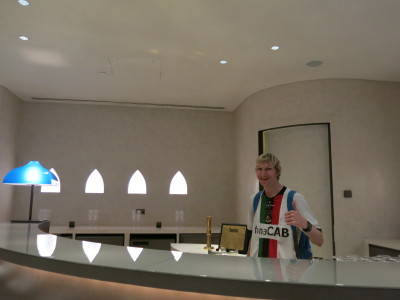 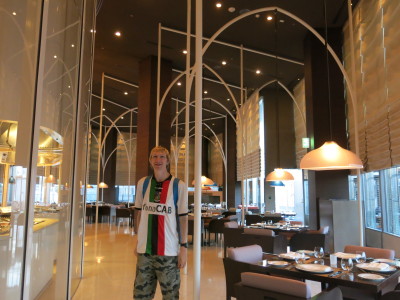 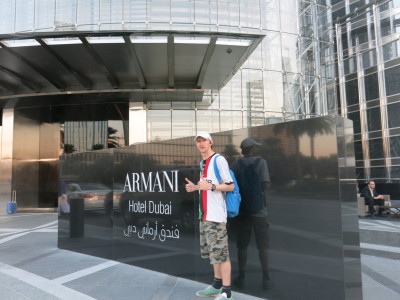 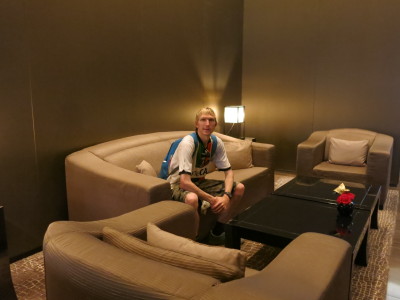 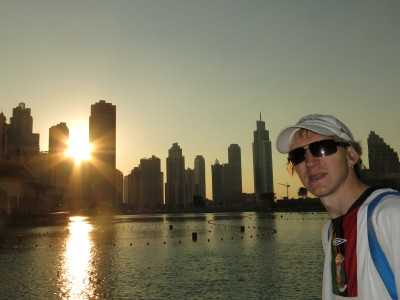 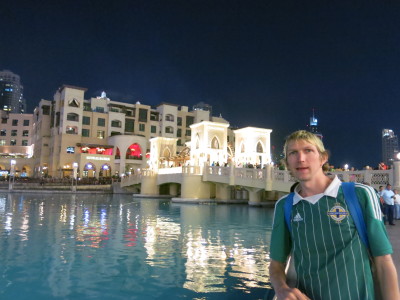 While backpacking in Dubai we stayed in the City Max hotel which is a decent budget option, It has a bar on the ground floor, cable internet in the room and a superb swimming pool on the top floor.

Here are some videos from our time checking out the Khalifa which is the world’s highest building:

6 thoughts on “The Backpacker’s Way to do the Burj Khalifa in Dubai, United Arab Emirates”