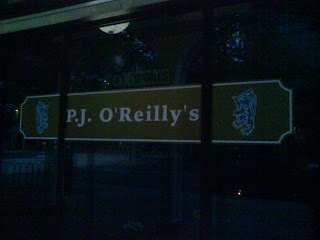 Backpacking in Australia: Three States In One Day

Hardly a big deal doing three states in one day, considering the fact that we were on a bus trip…There was me, Neil and Daniel exiting the Australian capital city of Canberra on a dark lonely Sunday. A few weeks before we already knew we were doing the trip. Three days would be enough in Canberra (though I could easily have spent longer there – I loved it) and next it would be onward to Melbourne. So how does that mean we would do three states on a single 8 and a half hour bus trip?? 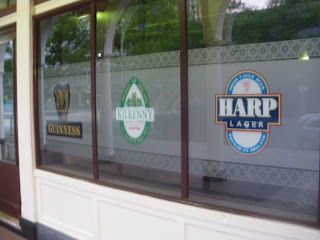 Well basically because the state known here as ACT (Australian Capital Territory) is actually inside the state of New South Wales. In the same sort of way that San Marino and The Vatican State are both countries inside Italy. So we would leave the ACT, go through NSW (New South Wales) and end up in VIC (Victoria). Sunday night in Canberra meant a few relaxing drinks while watching the Melbourne Open Tennis Final on TV. Daniel and I supported British and Scottish player Andrew Murray. Neil for some reason chose to support Roger Federer, of Switzerland. After an extremely enjoyable day out in Canberra, we headed to the famous Wig and Pen pub to try their home brewed beer. 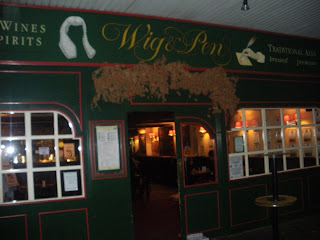 The pub had been recommended by a few people to me before. It was a traditional English style pub famous for a variety of home brewed ales. We were told by a lady at the festival (Canberra Summer Music Festival in Botanical Gardens – more on that elsewhere) that the pub was on Alinga Street near City Hill. While working in PJ Gallagher’s Irish Pub, a customer from Canberrs also once told me “there’s a PJs in Canberra too – another Irish pub – but it’s PJ O’Briens.” By coincidence both pubs were on opposite corners of Alinga Street. When we got there however, about 9 pm ish on a Sunday night – PJ O’Brien’s was totally shut and Canberra was a ghost town. Nobody was about. 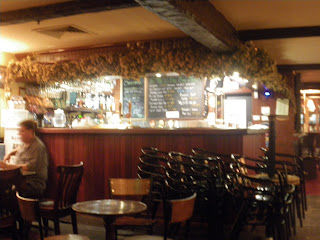 I gazed into PJ O’Brien’s and was delighted to see the ‘Harp’ sign on one of the windows – my old beer of choice whilst living in Northern Ireland. Sadly I couldn’t get one cos it was closed so it was into the Wig and Pen we went – but even it was like a ghost pub and as we ordered our drinks the barman said “If youse want any more let me know – we’re shutting in 30 minutes”, and that was all the time we got in the Wig and Pen. Still I enjoyed the Wig and Pen real ale Schooner that I had. I also bought a bottle of their famous lager – Kembery to drink at a later stage/for the journey. And we left the Wig and Pen to head to the only bar open in the ghost city of a Canberra Sunday – King O’Malley’s pub. 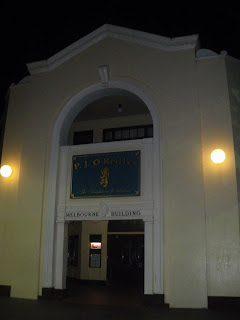 In there I had a Kilkenny and some garlic bread (we had also got some food from the shop in between for the long bus journey ahead) as we sat and watched the tennis at a table behind a group of pretty American travelers. Andrew Murray lost, we got our bags back from the Canberra YHA hostel and just after 11 pm headed to the Canberra Bus station for the night bus to Melbourne. 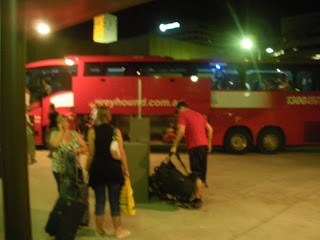 At the Greyhound bus depot we spoke to an English lady – it was Gemma from Norfolk. She was to become a travel mate for the next few days as it happened. And we were onboard, the sky was dark, and within 30 minutes we were already out of the ACT and back into NSW heading south west to Melbourne. 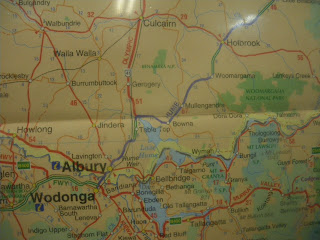 I drank the nice Kembery Ale on board and drifted to sleep. There was nice countryside but it couldn’t be seen well at night anyway. Soon we woke up and were in a very small and remote village called Holbrook, in New South Wales. 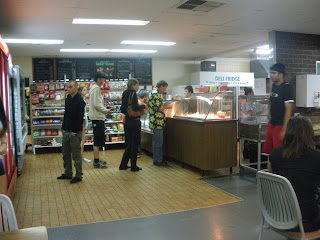 It was a half hour petrol stop and for food and drink. Everyone was half asleep. The prices in there were dear but I was hungry and thirsty so bought a coffee, a chocolate bar, crackers+cheese and a Maxibon ice cream. That was $10.10 for all that. When I got back on the bus, Daniel had managed to spill about a quarter of his packet of Pringles on the bus floor. And the driver also banned me from taking the rest of my coffee on board – no hot drinks!! So I had to chuck most of it away. Great start to the Melbourne dream we thought. 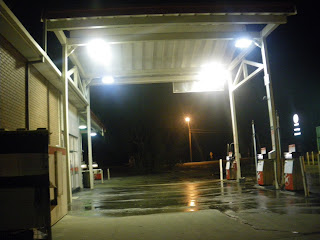 iPod land had been efficient again and I was out for the count listening to Noel Gallagher classics. I awoke in Victoria, the third state of the bus journey. We were on the outskirts of Melbourne. 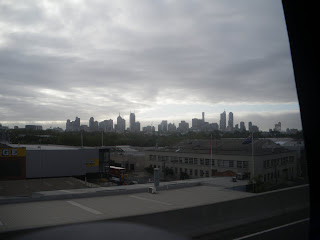 There had also been a very brief stop at Albury/Wodonga where 1 person got off the bus. Now the sun was out and we were in Melbourne. The bus journey took about 8 and a half hours exactly and we got out at Southern Cross station on Spencer Street. Not only had we done 3 states, but it was over 2 months and in just 1 day – for it was now the 1st February. 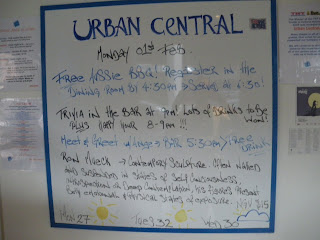 On exiting the bus, we met Gemma again and a new guy, Greg was with her. He was from Canada and both were staying at the same hostel that we had booked into – Urban Central on City Road. We crossed the bridge and Clarendon Street and arrived safe and well at the hostel. The backpacking in Australia adventure continued. It was time to do Melbourne…