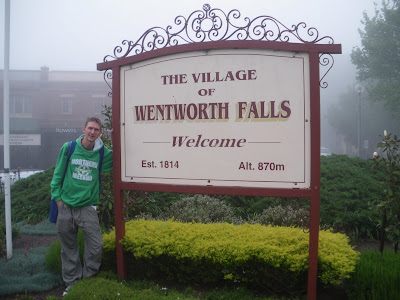 When you spend time in the Blue Mountains in New South Wales there is an endless list of walks, treks, hikes, points, peaks, waterfalls, gorges, valleys, rocks, forests, caves to see. During the week that we spent there we tried to bung as much in as we could. This meant constant hiking through the main mountain areas near to Katoomba. Katoomba was our base, as we stayed there in the Blue Mountains Central Backpacker Hostel at 144 Bathurst Road. However on days out we wanted to see all the local villages and areas, time permitting. One of these days we decided to do Wentworth. 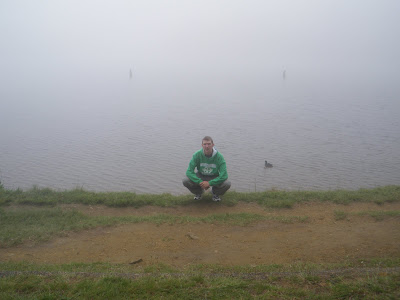 Wentworth itself is a small mountain village, which came into official existence in 1814, and it has an altitude of 870 metres above sea level. A quiet peaceful wee village, it was another excellent choice of day trip in my first 2-3 weeks in Australia. Getting there we could have walked, but given the time it would have took, and the intense hardcore hiking ahead, we opted for a return train from Katoomba train station. The return cost just $4.80, and we alighted in Wentworth Falls, on the other side of Wentworth Lake. It was already late morning, but there was still an awesome looking mist in the Blue Mountains sky. The mist had clouded out any view of Wentworth Lake. But still, Daniel and I set off firstly to see the Lake and enjoy the view of nature from this great height. 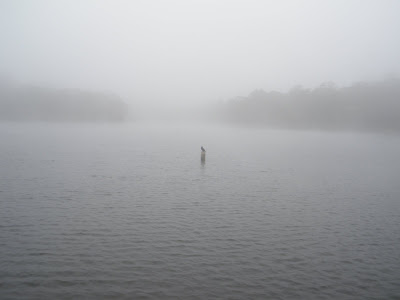 We had a full breakfast that morning (including these very nice sausages from Franklins in Katoomba, sausages that reminded me of Lamb and Rosemary ones we once did in the butchery at Steenson’s, an old job of mine). We also prepared a full lunch, bananas, yoghurt and decent ham and cheese sandwiches would give us the energy for a major day of exploring Wentworth. The mist wasn’t clearing though and the sky looked eerie, peaceful and sleepy. Dan said that the mist and spookiness reminded him of Silent Hill, from a computer game (and filim). There was nobody about as we walked north to Wentworth Lake via Sinclair Crescent. 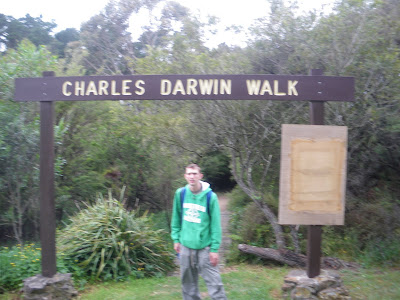 Once at the lake there were birds perched on sticks, almost guarding their territory and yapping at each other. Meanwhile flies and insects attacked our heads and faces. It was time to use my “Boots” (bought in Bournemouth) insect repellant cream for the first time in Australia (It came in useful in Taiwan, though I still got bitten). You could enjoy the peace by Wentworth Lake, which had a dam at the edge. It may even serve as a reservoir for the area. After chilling by the ducks and birds, it was time to walk through the village of Wentworth. 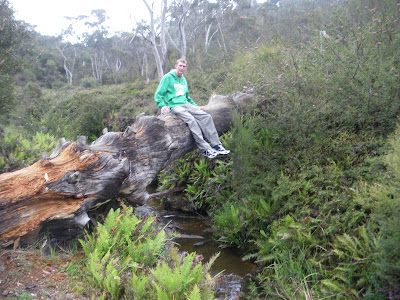 Wentworth looked small and self-proud. The main street featured your obvious shops and essential outlets, without the modern commercialisation of a McDonald’s, a Starbucks or even a Woolworths. We turned off the Western Highway and through Wilson Park, a very small park with a small pond, and where the river, Jamison’s Creek had followed down from Wentworth Lake. 50 metres into Wilson Park and we spotted our first Trek of the day – Charles Darwin Walk. 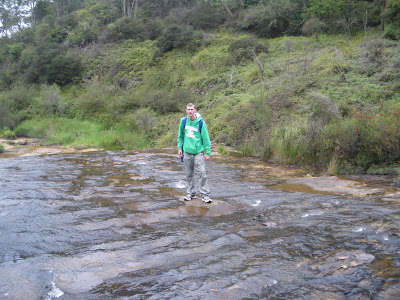 Obviously this held an interest to us two Brits. Charles Darwin, the 19th century British Scientist had once walked this path, having trekked on horseback across the Blue Mountains to Bathurst, back in January 1836. Darwin had been to the Wentworth Falls, and had written about it, a quote of which was placed on the plaque on the entrance. As Darwin looked at the view he described it as a view that “was to me quite novel and extremely magnificent.” The walk was an easy one, but with lots of interesting countryside and forest on either side. There were plenty of photo opportunities there, including standing in the middle of a river on rocks and sitting on a felled tree, acting as a bridge across the river. 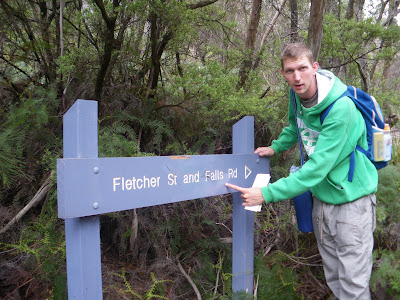 We got a bit ambitious, and at one point, with our bags on our backs went into a slippy part of the river on rocks. This proved a mistake, as Daniel slid on the rocks and went flying down the ridge. Getting totally soaked. It was a comedy moment, or at least would have been if it wasn’t for the tragedy that followed…he noticed his camera had fallen out of his pocket, and into the shallow water. He dived back in, grabbed the camera, which had been soaked in water for some 10 – 20 seconds. Attempts to revive it were in vain, as we tried all sorts of techniques, but it was broken. At least the memory card (and previous photos) would be OK, as we tried them in my camera and they worked. The lesson we learned from this moment on, was to leave our valuables and bags over by the path or with the other person while doing crazy things. I stood there with the river flowing past and I had to walk back through the slippy rocks. From now on, we would still climb up rocks, trees and waterfalls. Just NOT with cameras, passports, mobile phones or wallets in pockets. 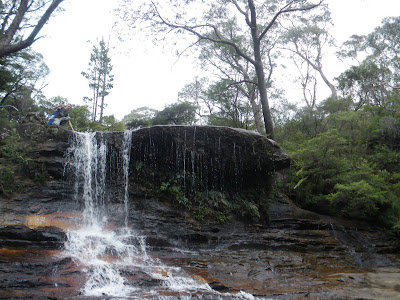 There was no time to dwell though and it was on with the show and down to the bottom of Charles Darwin Walk. We got to a point called “Weeping Rock”, which literally was a rock girning away with the water streaming down. There was also a serious of small waterfalls called “Queens Cascade.” There and then the Charles Darwin walk ended and we had a choice to make. It was either stay on the cliff and head to Princes Rock Lookout, and across the cheating “Shortcut Track”, go on the easy “Overcliff Walk”  or take the much trickier “Wentworth Pass” option. In fact there was even the fourth option of another route called “National Pass”, but for Daniel and I there was only one winner – we would attempt the “Wentworth Pass.” 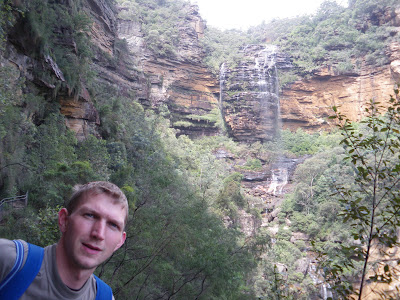 The first section took us down down down steep steps past wonderful varying views of the Wentworth Falls, the main large waterfall in the area. Beyond this a section called “Slacks Stairs” was downwards even more as we found ourselves in deep ridges and valleys. It was hardcore descending. At one point we met a couple from England of all places, even more bizarre from Dartford where I used to live! A photo opportunity was had there before continuing down the slacks stairs, and even a short bit of spontaneous abseiling, and downward rock climbing, until we reached the bottom of Wentworth Falls. There we had lunch with black cockatoos on a small beach between rocks, a waterfall, a river and a forest. The next part of the trek was tricky. 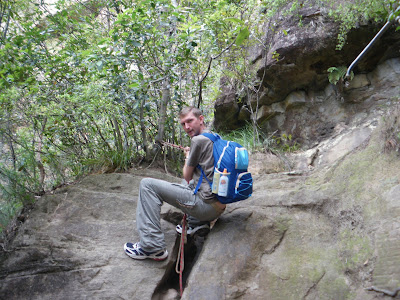 Through forests, uneven tracks, unobvious paths, broken trees, lizards and other wildlife we went, on a track that seemed to take forever. Dan still had his cough and was suffering and for me, it felt there would be no end to this path.  Then we reached the valley of the waters junction, and we knew the end was in sight. Water was essential on this particular day. On the remainder of the Wentworth Pass we didn’t meet a single other soul, it was a lonely endless walk. The valley of waters included 6 waterfalls all together one after another. We saw them all as we started the tough ascent. It kept rising and at points we stopped to enjoy the views and sample the waterfall scenery and calmness. The first waterfall was Red Rock Falls. 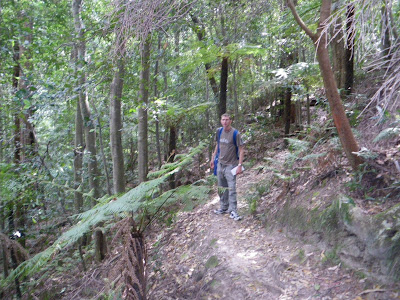 By the time we had reached the top we were fed up singing “Don’t go chasing waterfalls” by TLC and had seen our fill of them. I enjoyed them all but we struggled up the final bit sweating and needing water. The waterfalls we passed, for the sake of this blog were Red Rock Falls, Britannia Falls, Flat Rock Falls, Lodore Falls, Sylvia Falls and Empress Falls. By the time we had reached “Empress Lookout” the photos will show 2 slightly weary individuals. It was still fun and we had another trek ahead, right to the top where the Conservation Hut or Information Centre was, by a car park. 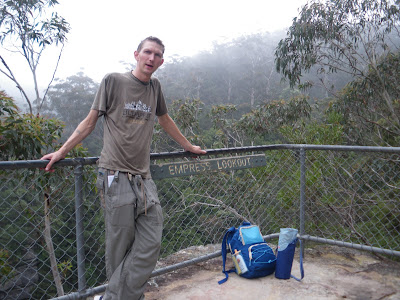 Next stop was check out the village, maybe find a pub for a celebratory and well deserved pint of beer and get the train back to Katoomba. Onto Fletcher Street and that eerie mist was there again, as well as a random local playing basketball in a Leeds United football shirt. “We all hate Leeds scum” I sang as we reached the junction of Falls Road. No significance there for Dan, but for me a photograph opportunity by the sign of Northern Ireland’s notorious Catholic Road, the main Catholic or Nationalist Road in Belfast. I got my “Falls Road” photo (like I had done in Niagara, Canada in 2001) and we headed back down and ended up passing another Presbyterian Church for my list and Wilson Park. 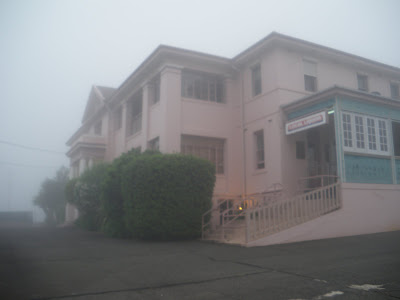 WE wanted a pint and saw no pubs earlier, so we asked a local out walking and he said something like “best pub in town mate – grand view” in a strong Wentworth accent (presumably). We took a right once back  on the main road and there was the pub, shrouded in mist, looking out of place as a large pink hotel on top of a hill. It seemed to be the only pub in town. In we went it was full of locals. I had a VB schooner, Dan a bottle of Strongbow. We savoured the sips and hung there for 30 – 40 minutes. 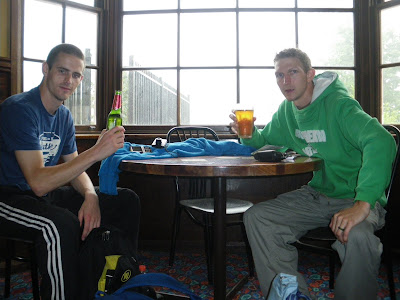 Then we simply walked back through the village, stopping by another British reference point, Coronation Park. In the park a fitting war memorial for those local victims who fought in Vietnam and Korean Wars in days gone by. The mist was still there as we boarded the train out of the misty magic of Wentworth Falls and back to our hostel base at Katoomba. 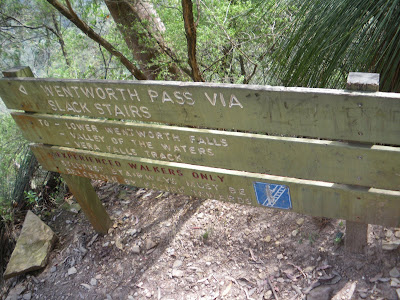 
A VIDEO WAS ALSO TOOK AT WENTWORTH LAKE, BUT I’M JUST TRYING TE FIND IT…
Join 15,017 Monthly Readers! If you enjoyed this article and LOVE travel and SAVING money, get e-mail updates from Don’t Stop Living – a lifestyle of travel! (It’s Free) 😉 Jonny