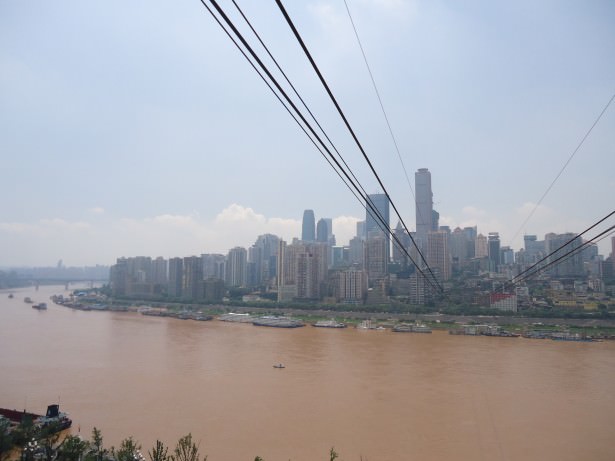 If you read my post about my journey to Chongqing this week, you’ll know how much visiting this colossal city in China was a huge huge childhood dream of mine. When the time finally came round, I was completely inspired by it. I haven’t given a decent breakdown of the sights in and around Chongqing just yet though, so here are 10 things to see and do (these are just what I picked out personally – didn’t include all the obvious tourist attractions by the way!). 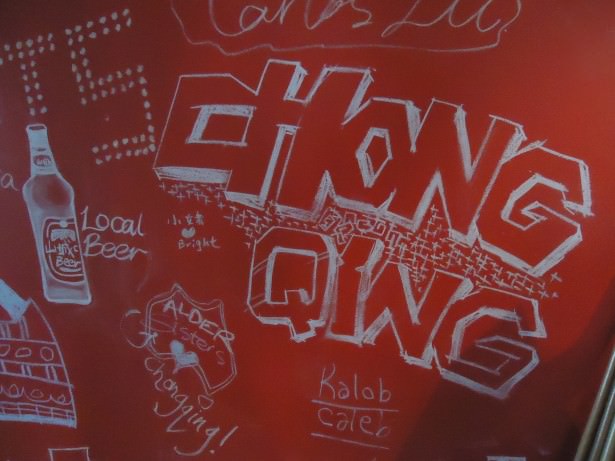 Backpacking in Chongqing: Quirky English sign in the hostel!

Quite frankly, there is a LOT to do in this mega metropolis and I only touched the surface, but these 10 should get you started. By the way let’s not get shy from the truth while backpacking in Chongqing, you are exploring what is probably the biggest city in the world! 32 million people are housed in the Chongqing metropolitan area. 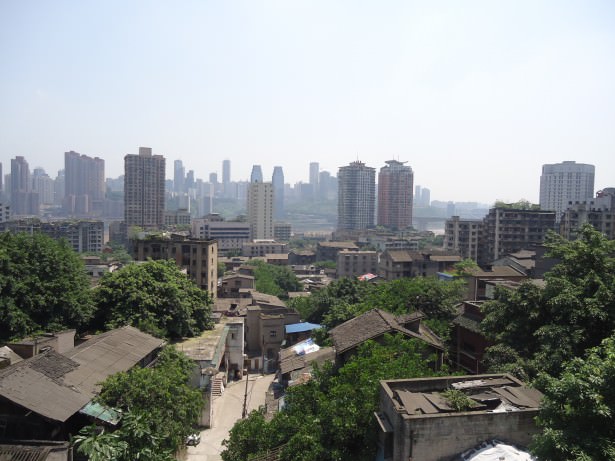 As you know I’m all about hostels, good staff and having a friendly base in new cities. So you can start by booking into the Green Forest Hostel in central Chongqing – great staff, a really cool social atmosphere and a fab location (near a metro station and bus routes). I was able to tour the city easily from my base in the Yuzhong district. 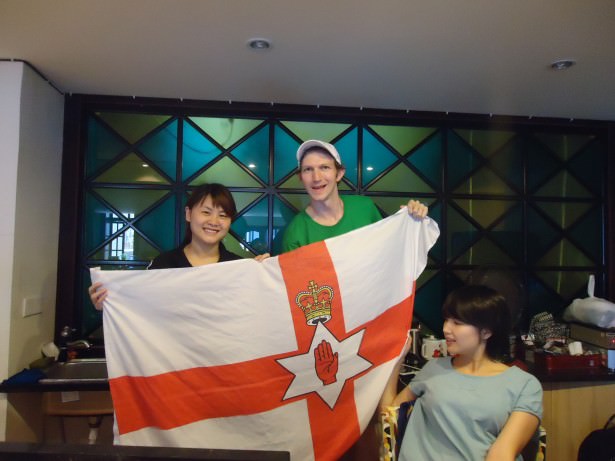 Angelina and I with my travelling Northern Ireland flag in the Green Forest Hostel in Chongqing.

I got a few cool photos of me with the staff of the Green Forest Hostel and we also enjoyed a night of making rice leaf dumplings. 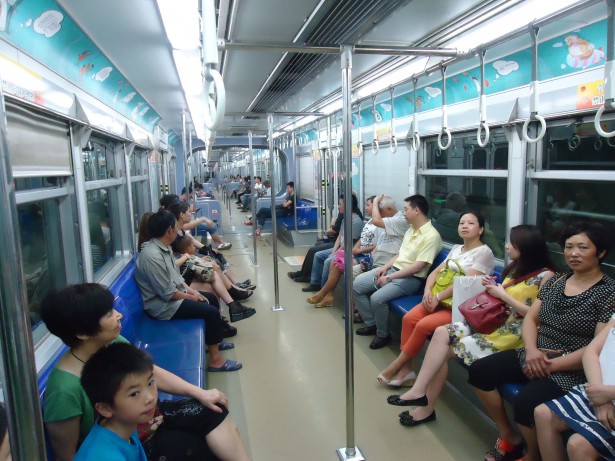 Chongqing Metro system in this monster in China.

I’m not kidding. At some point, you will need a wee wee or a poo poo and what better place to go to the toilet than the world’s BIGGEST toilet complex. Hardly the best claim to fame a city will ever have, but I went to Chongqing and visited the world’s largest toilet, which is situated right on the edge of the city in a theme park called Foreigner Street. Get with the quirkiness of this colossal city. 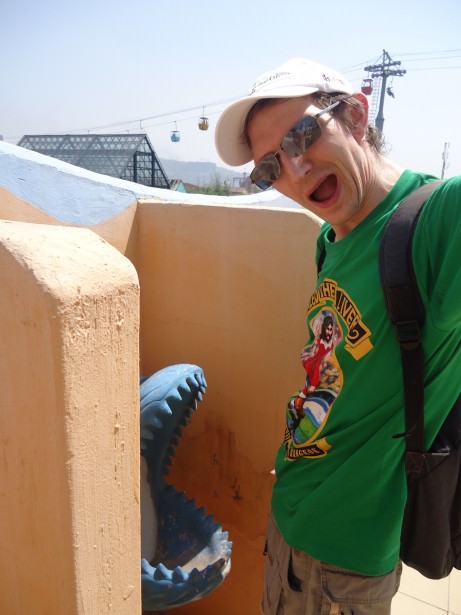 Doing a wee wee in the biggest toilet complex on the planet.

Chongqing has lots of old parts to it and they intertwine pleasantly with the modern. On a street down some steps just off one of the main roads near the CBD, you find this poky enclave known as the 18 Steps! Well worth strolling up and down. If you don’t make it to the 18 Steps, Ciqikou Ancient Town and the houses on stilts are worth checking out too! 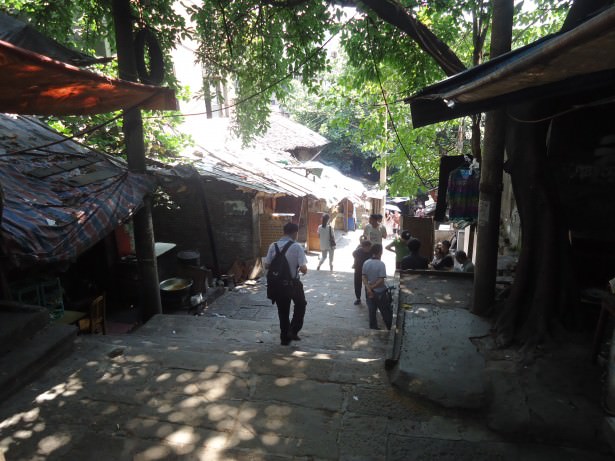 At the top of the 18 Steps there is also a brilliant viewing platform which overlooks the city. As I was alone as a tourist, a few local lads chatted away to me to practice their English. 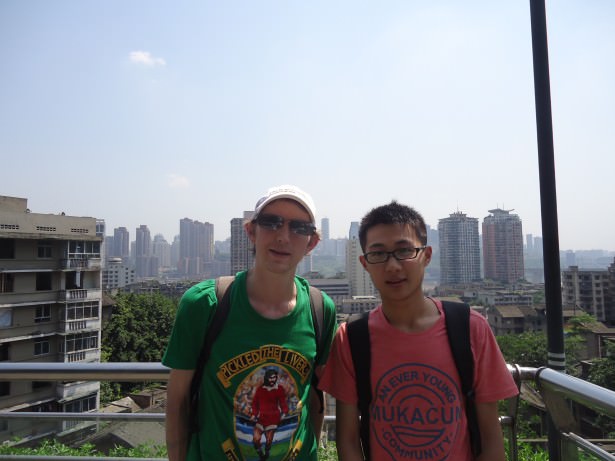 Overlooking Chongqing from the top of the 18 steps.

Despite having been to more Chinese Temples than I can count, I still enjoyed visiting the Arhat Temple. It costs 10 RMB to get inside but you get to see a few different temples and the big highlight is a room full of 500 terracotta Arhats (Buddhas who have achieved enlightenment). 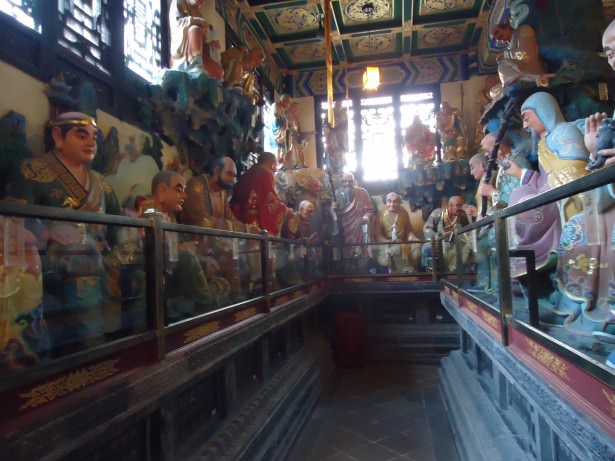 The terracotta Buddhas inside the Arhat Temple in Chongqing.

4. Head out to Foreigner Street 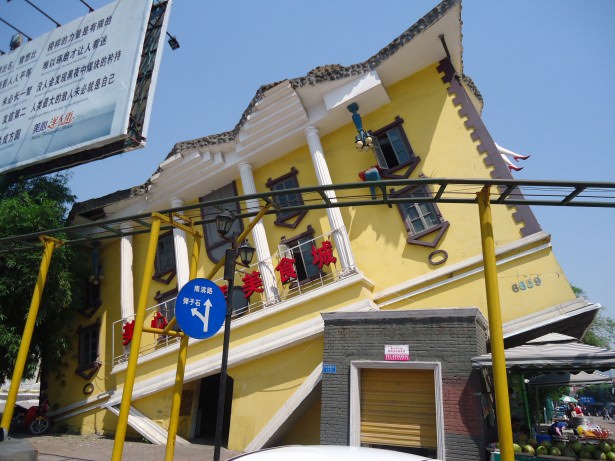 One of many crazy quirky buildings in the Foreigner Street Theme Park in Chongqing, China.

5. Take the Cable Car Across the Yangtze River

Oh yes! For me one of the highlights of this crazy choc a bloc city was the cable car ride across the Yangtze River. For a mere 5 RMB you can cross to the other side, take in some amazing views and stare in awe at this beast. I wrote a detailed piece on taking the Chongqing Cable Car here.

6. Check out the Views at Chaotianmen Square

Down at the river convergence between the Yangtze and the Jialing Rivers is a massive place to watch the world go by.

A panoramic shot of the river convergence in Chongqing.

It has been turned into a park and a square called Chaotianmen Square. The views are amazing and this was a moment of awe for me. 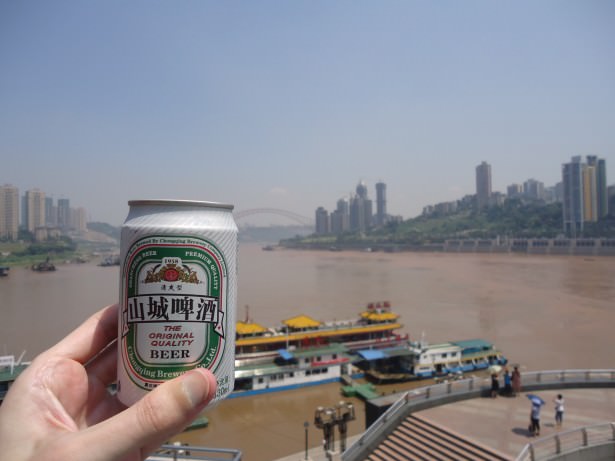 Having a cheap 2RMB beer watching the world go by where the Yangtze River meets the Jialing River in Chongqing.

I chilled out in the heat with an ice cold beer (2 RMB incidentally) and marvelled at the chocolate river which had weaved its way down to Chongqing. 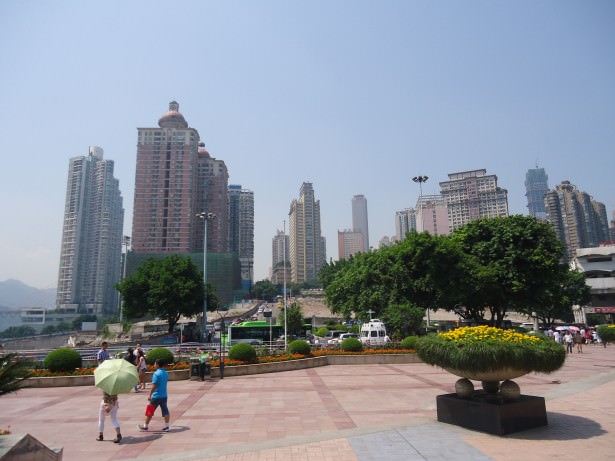 The gardens at Chaotianmen Square in Chongqing.

Chongqing is the same as the rest of China of course – it has a food street, or more accurately many food streets. My local one was in the area near the CBD. A range of local Sichuan and Chinese dishes are served (the Sichuan spicy hot pot being the recommended dish of the region) as well as an influx of up and coming foreign restaurants. A few decent bars around too. 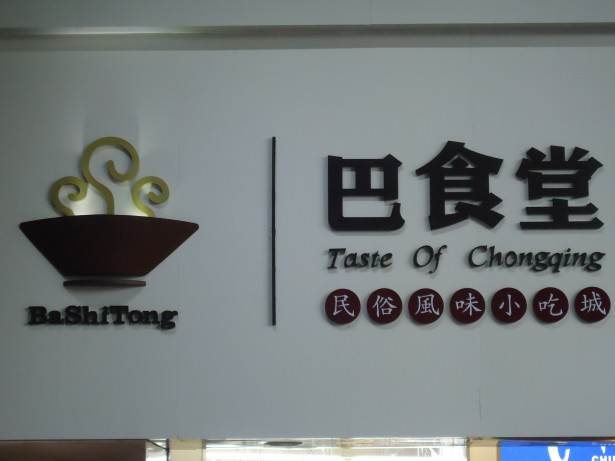 A taste of Chongqing on Food Street 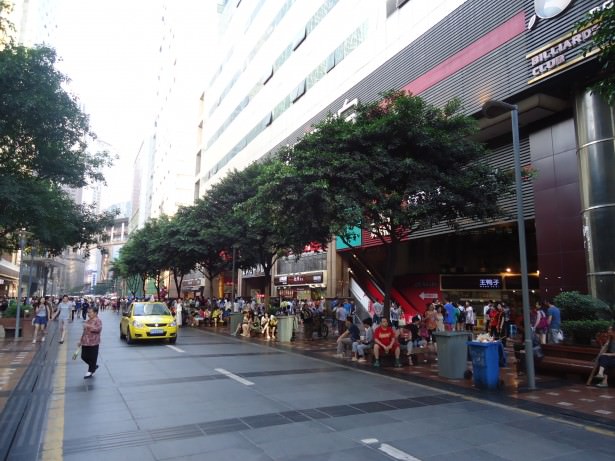 Plenty of food options in Chongqing.

Chongqing could really rival Sao Paulo, Hong Kong and Shanghai on skyscrapers. Believe me, they are everywhere. The main CBD is seen as being the one at Minzu Lu and I wandered round at leisure. There are just not many foreigners about but oddly there are a load of these “glamour” and “posh” type shops (e.g. Giorgio Armani etc.) with nobody around rich enough to shop in them. 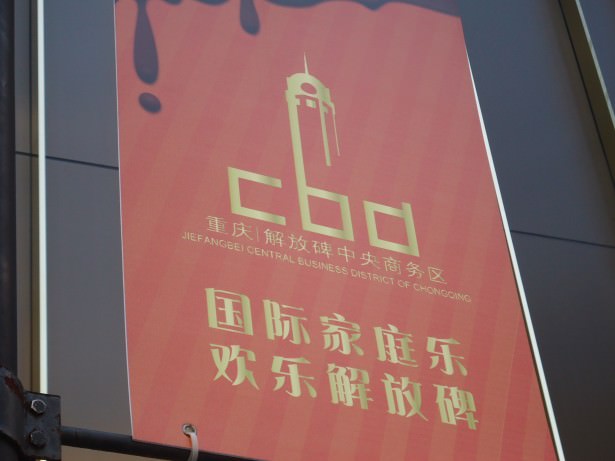 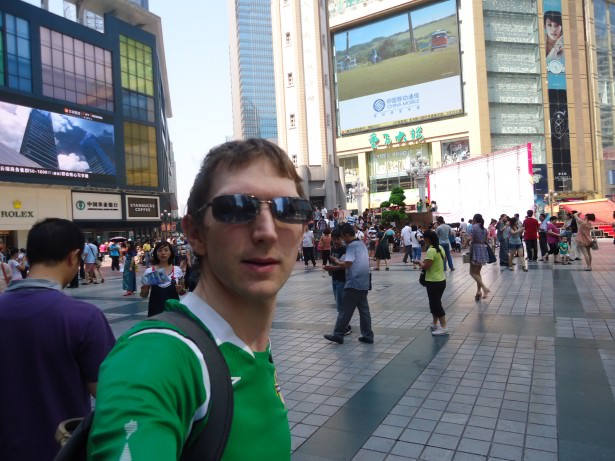 Spot the foreigner – wandering all around Chongqing CBD on my own.

9. Become a Tourist at Liberation Monument

And inside the CBD is the Liberation Monument. I checked out the central based Liberation monument by day and night – the locals all flock here to snap selfies!! 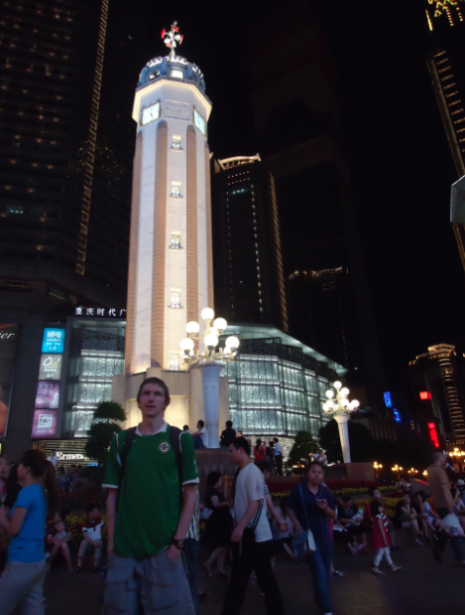 I loved the fact you could just walk around Chongqing without EVER seeing another tourist with a camera. It’s that sort of city and that was the charm of it for me. Even a walk up the old city walls, I’m on my own, locals must think “wow a tourist”. 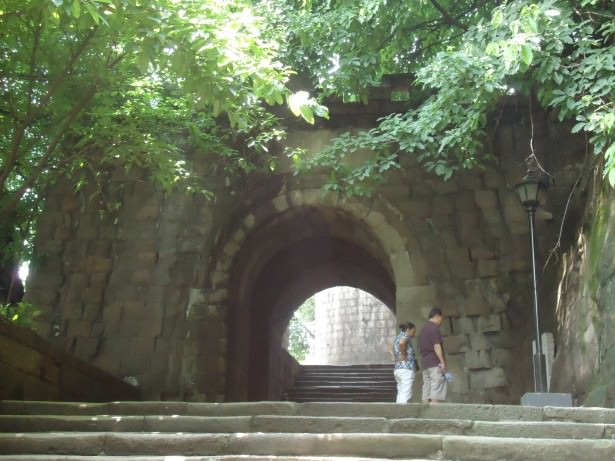 On the old city walls of Chongqing. 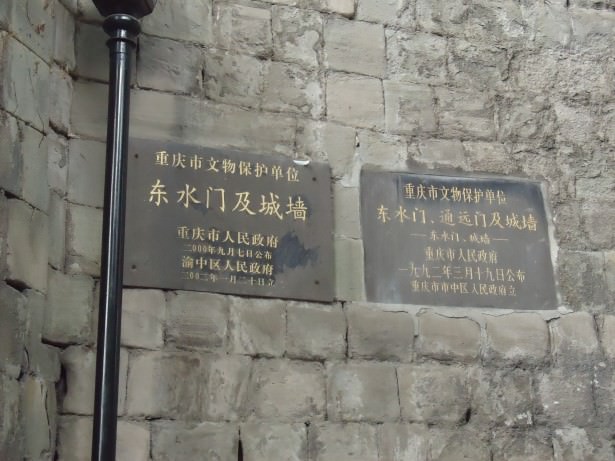 Plaques on the walls of Chongqing.

As you can tell I was totally inspired by Chongqing. Places like Chongqing mean more to me than Beijing and Shanghai ever will. Chongqing is a hidden gem, a sprawling unknown metropolis and you know what I believe it – I believe that this is the biggest city in the world, population wise. It’s an amazing city and I urge you all to take the plunge and head out there! Inspired by Michael Palin’s journey on Full Circle, I finally lived my childhood dream of visiting Chongqing. Inspiring.

Here are some videos from backpacking in Chongqing:

8 thoughts on “Backpacking in Chongqing, China: 10 Things to See and Do in the World’s Biggest City”