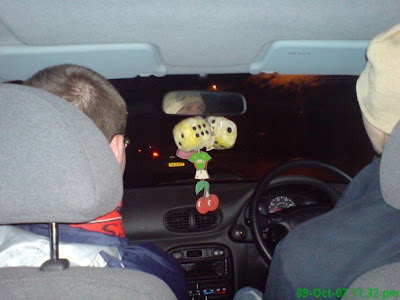 So we were heading to Bristol to play Bristol Rovers, the Pirates away. On an October Tuesday night in the LDV Vans Trophy Cup. The 9th October 2007 to be exact. It was a significant away match for me in many ways… 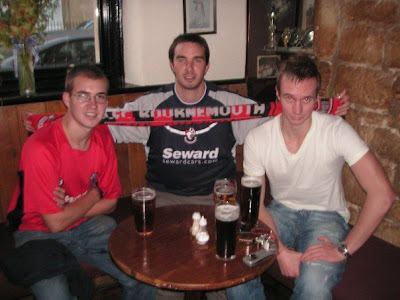 1. It was my first ever LDV Vans away match.

2.      It completed the double for me of watching a match at both Bristol league stadiums (having seen Bristol City draw 1-1 with Nottingham Forest in March 2006 on a SOE NISC trip).
3.      It was the first of what was to become many away memories to be cherished in the company of Dan Darch. If he wasn’t taking the limelight off my quiet, loyal away day comrade Austin Sheppard, he was expanding the brightness of that very limelight against a sky which even Austin would call “red and black sky at night – Sheppard’s delight”.


Oh, Patrick was also there, adding less than impressive jokes, odd conversations and blue jumpers. Patrick, too would become a good away day mate, even if his personality had Dan, Austin and I in stitches at time due to his oddness. A good lad, all the same! Perhaps not as odd as myself or Dan in principle. But come on, who sellotapes their mouth, drinks fabric conditioner and turns up to an important relegation battling away match in the opponents colours. Patrick may never outlive the “blue jumper incident” from a barmy trip to Carlisle later on in the season. 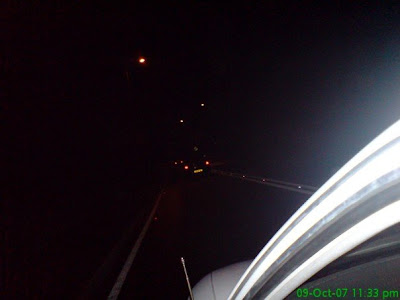 My white Hyundai Accent was ready for the drive north. It was hardly the first away trip that I drove to. I had driven first of all to Eastleigh in a pre-season friendly in July 2004 (with Jody and Neil). In December 2005, I drove myself and co-worker Christian Matt up to Huish Park in Yeovil for an inspired 1-1 draw the night before Christmas Eve. The furthest away trip in my car however was the drive up to Nottingham in April 2006 where Steve Fletcher scored to earn us a 1-1 draw with Forest at The City Ground. In those three matches, as a driver in my Hyundai Accent, I was unbeaten. Two 1-1 draws and a 1-0 win. The omens were good. 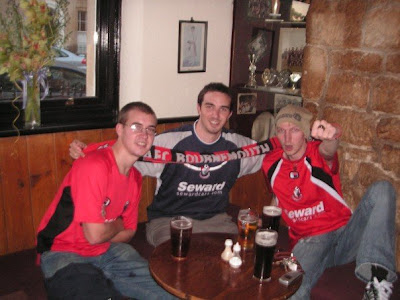 I picked up Dan, Neil, Austin and Patrick, in which order I’ll never remember and we got some good music on the stereo as it got dark and cold on the Wessex drive to Bristol. 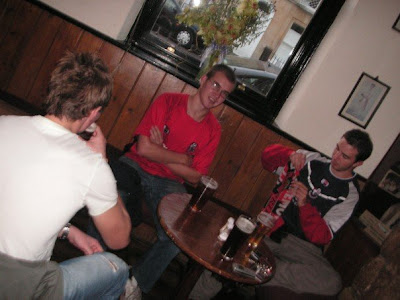 We stopped off in Bath for a tea time pint and bite. Not just to avoid rush hour, but to break up the banal ness of driving for me and to add in a compulsory pub stop on our away day. All previous away days had needed a pub stop. This one was no different. 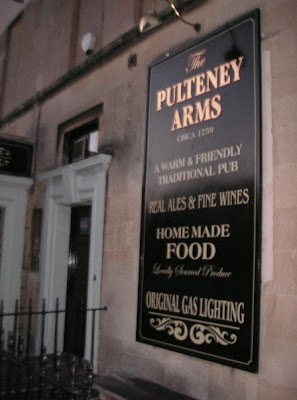 In the pub of choice, The Pulteney Arms, we sat beside a fire place and ordered some bitters.
Then we drove past Twerton Park, home of Bath City FC and ironically also home of Bristol Rovers at one point when they had ground problems in their native Bristol. 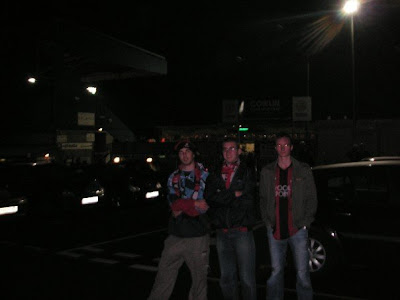 We arrived at the stadium early, I grabbed a match programme and a pre-match burger or pie (the quality of which none of us will ever remember). 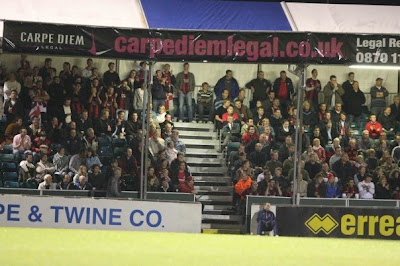 The match kicked off and we were stood behind the goals in a very temporary stand. Indeed one wondered about the health and safety of it all, as the stand was in danger of collapsing. We made it into the Bournemouth photos on the website from the match. 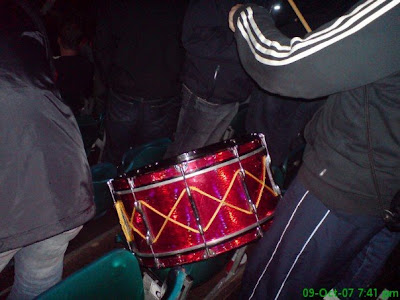 I stood at the back next to Chris the drummer and we got into the singing amongst the Cherry hardcore. For a Tuesday night LDV Vans match the away attendance was larger than I thought and the optimism from the bizarre 4-1 win at Crewe had transferred to The Memorial Ground in Bristol, where more than a fair few Cherries chants silenced the home crowd. 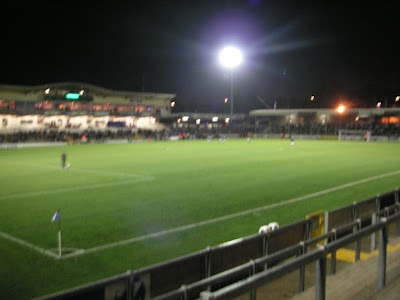 On the field we didn’t concede a goal. All we needed was to nick one and we’d be through. 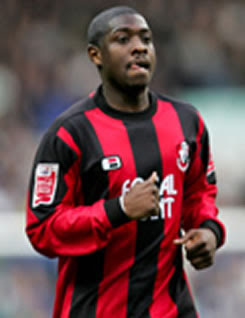 The ball fell kindly to Jo Kuffour who turned and shot into the bottom corner in front of us at the start of the second half. It was the first away goal I had to cheer in almost a year, the first away goal shared in the company of Dan and Patrick and as Austin did his usual “clapping”, we sealed the tie! There wasn’t even a nervous “can we hang on?” We all knew we were winning that one! 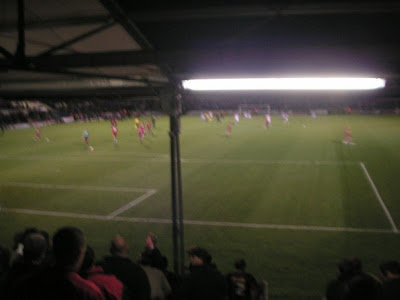 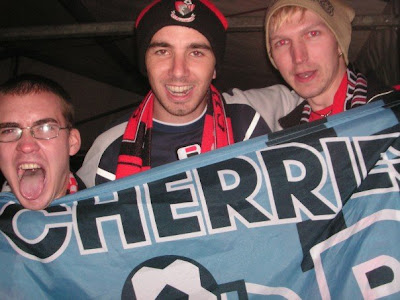 Celebrations galore in the away end! 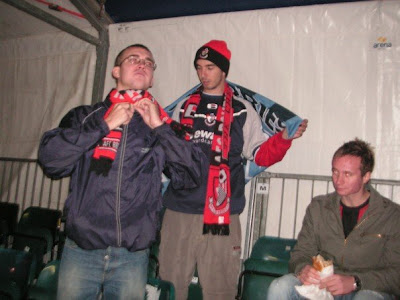 That was two away wins on the bounce. A rarity for Cherries fans, even more rare given we still hadn’t won a home match or looked any good. 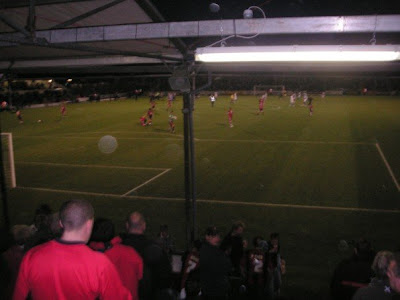 After the match ended and we walked past back streets, tight, compact, barely lit and typical of an English city suburbs. Directions to and from the ground, I don’t recall. I have a feeling Dan plotted our route successfully and the final task was to drive home, safely into the next round. 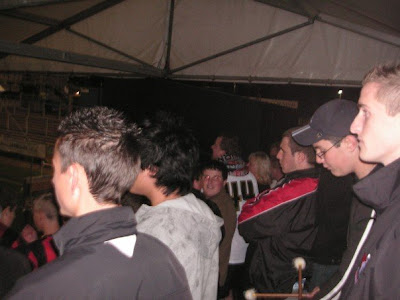 However a few of my mates lived in Bristol, including Alan Scott who invited us down to his local pub for a quick pint on the way home. It was called The (Alan will update this!!!), they asked me for ID (aged 27 at the time which everyone found funny) and it was quiet in there, but we clinked our glasses and enjoyed the victory. 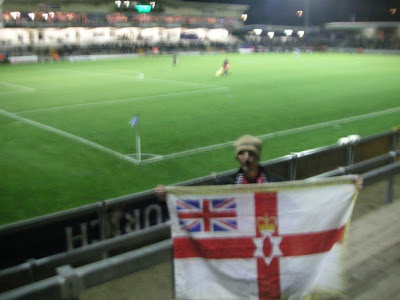 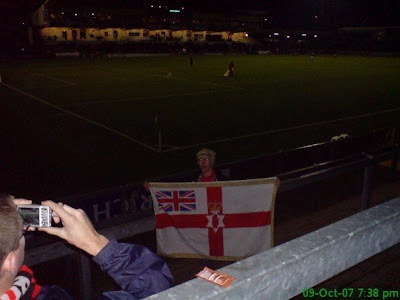 Northern Ireland flag got its usual airing, though Dan Darch took these photos and at the time was probably wondering what the fuck that was all about. Well, he knows now, it’s just my way of trying to stay loyal to my home country whilst living in another. It’s just me being me. I’ve tried to change but that flag always comes out somehow… 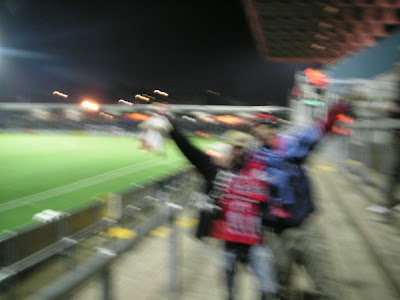 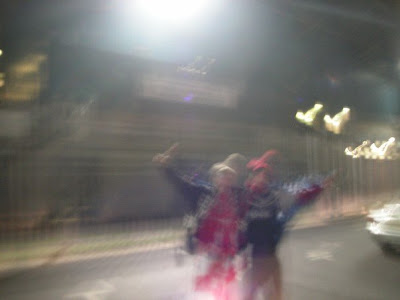 And so we were through to the next round. There was no Wembley dream for us however, as MK Dons thrashed us at home in the next round live on SKY TV, which kind of suited us as the bigger problem that reared its head was : points deduction and relegation. 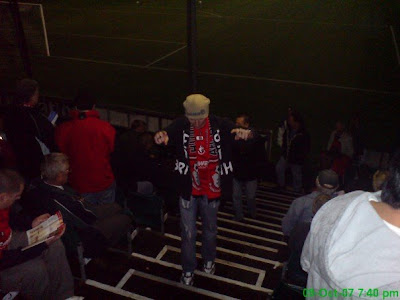 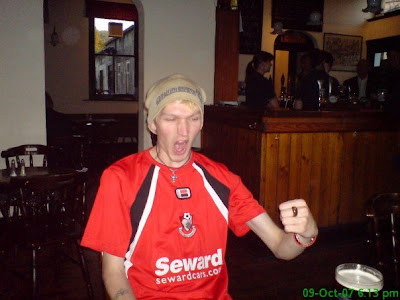 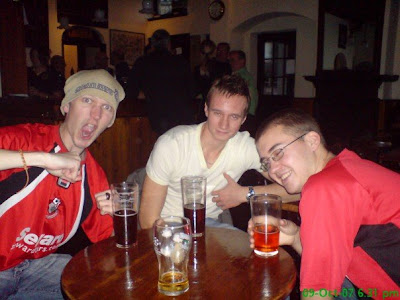 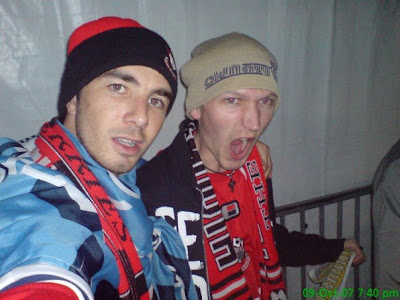 The positives were car was now unbeaten in 4 away matches and we had a solid gang of good lads up for many and various random away trips. 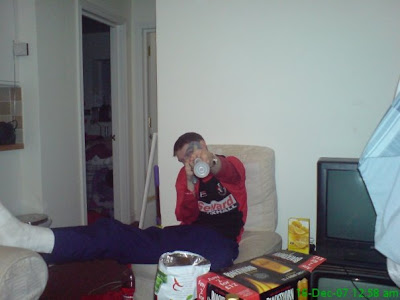 I didn’t know it then, but due to a broken foot, going AWOL and the desire to drink rather than drive, there would be only one further away match attended in that car (Hereford, which can be read here: Hereford Away (9 Parts) ). Thanks Bristol. How sweet to have stolen victory from the Pirates!


Who We Also Met – Alan Scott
From – Bournemouth
To – Bristol
Via – Bath
Miles Covered – 192 Miles
Where – The Memorial Stadium, Bristol
Pubs Visited – The Pulteney Arms, Bath/Alan Scott’s local, Bristol
Result – 1-0 to the Cherries (Kuffour)
All photos copyright Dan Darch and Jonny Blair, 2007
Key Song –
ABBA – THE WINNER TAKES IT ALL (the loser is standing small):

THE BEE GEES – YOU WIN AGAIN:


Couldn’t find the actual match so this one will suffice, it was 10 years earlier in 1997: