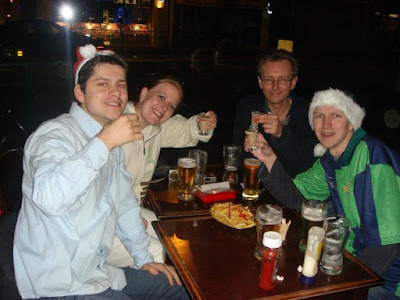 Christmas 2008 in Bournemouth, England: My Last Christmas in Europe

The fact it’s taken me a hat trick of years to finally talk about my last Christmas in Europe serves to presume that it wasn’t very memorable. Well actually it was, but for many different reasons I haven’t reflected on it until now. One is that my old hard drive was broken in 2009 by an ex-girlfriend and that contained all my memories from living in England – 6 years of them. Very rude of her to break it, deny it and not even offer to try to fix it or buy me a new one. That memory will forever linger, and in fact 7 or 8 months of photos and videos from my often full lifestyle remain missing. So that included the time over Christmas. I’m a man for photos and videos and without them, the depths of my writings seem, well, not deep or pictorial. 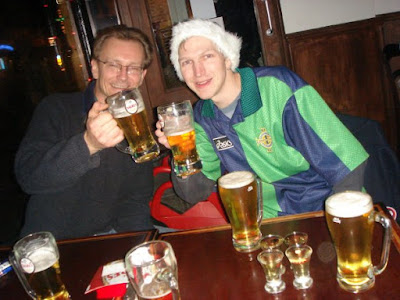 Lucky enough my mate Oggy from Bulgaria had captured some photos from our amazing Christmas Night out in Bournemouth. And I saved some of them . Not many bars were open in and around Bournemouth (which had been my home for over 5 years) so we had to make do with drinking and eating in a Portuguese Restaurant in Boscombe. I lived in the next suburb along, Southbourne at the time. 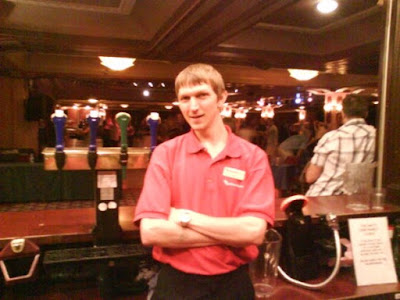 I had worked almost every day in December up until then. Work was easy and I basically ran the show, it’s not even an exaggeration or arogance to unearth that fact. I was the main barman in Bournemouth Pavilion theatre, by far their most loyal member of staff, always doing overtime, training others and working well beyond my rate of about 6 pounds an hour (or whatever it was at the time). I had been lucky to get that job back in 2007 on my return from a 3 month travel trip round the world, in that the UK was in decline and even theatres and bars experienced falling numbers. The job allowed me the luxury of time off when I wanted to jot back to Northern Ireland for the football and also I was able to make it to most AFC Bournemouth home matches. Plus I ran 2 other jobs at different times alongside it. 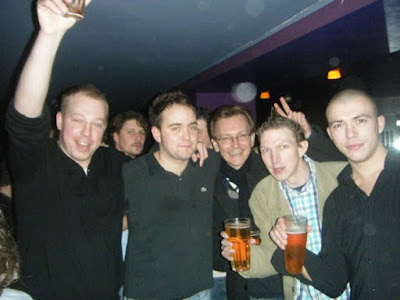 However the managers in that job were a total joke, most of them utter wankers curled up in their own fake English conservative nutshell. If it wasn’t for me, the Pavilion Sales would have suffered something shocking that Christmas as one other manager turned off freezers at night, a stupid mistake which meant the loss of hundreds of ice creams. Pantomime Shows in this busy Bournemouth Theatre relied on ice cream sales, not just for profit, but for tradition. Thanks to me, I kept noticing the turned off freezers and lack of proper stock or deliveries. I could have lept quiet but I told one of the senior managers about it and because of me we never once ran out of ice cream that year. Incidentally the Pantomime was Peter Pan, and of course I had free tickets and could watch as much or as little of it as I wanted. 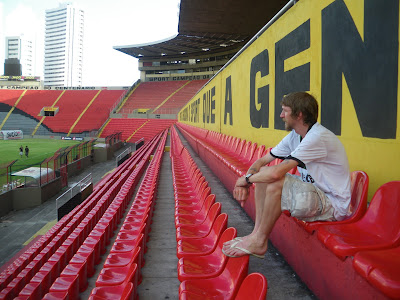 Other things were brewing. I had got a flavour for travel the previous year by trotting a full circle round the globe and planned South America next. BUT I hadn’t enough cash so I had looked at volunteer opportunities. I was destined to travel again in 2009. And I knew I would. That was at the back of my mind more than idiotic managers in Bournemouth Pavilion Theatre. 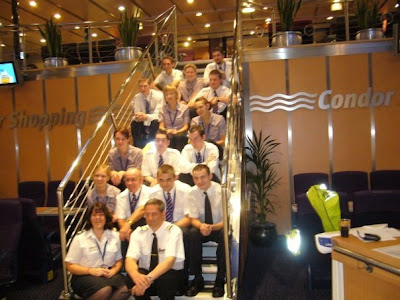 I had also spent almost six months of 2008 working on the Isle of Wight Ferries and had got a flavour for that type of work. I ended up working on Brittany and Condor Ferries serving the France, Guernsey and Jersey route in 2009 before I left the UK. In essence it was my dream job. Good pay, get to talk to people and travel with work. But my mind wasn’t right.

The job in Bournemouth Pavilion Theatre became somewhat of a filler for me. Ironic given that it filled almost my entire December 2008. I worked a long shift on Christmas Eve, getting no thanks for it. The shelves were empty from the night before as the managers were useless and we had 2 big concerts on that night – one in the Bournemouth International Centre and one in the Bournemouth Pavilion Theatre. Most of the part time service staff were fairly stupid, I remember one dude asking me what Gin was and another putting red wine on the fridge, plus a lot of them were drunk students, who “went home for Christmas” meaning they merely used Bournemouth as a party town and were really too young to ever live away from their families. I certainly didn’t want to keep friends with too many of them, I maintain a slightly different work ethic to them. Especially when it became obvious how lazy they were and I was picking up the pieces by working 17 hours on Christmas Eve. That said, I relished it, worked my ass off, enjoyed the banter in the bar that night and made it through the shift to celebrate Christmas! 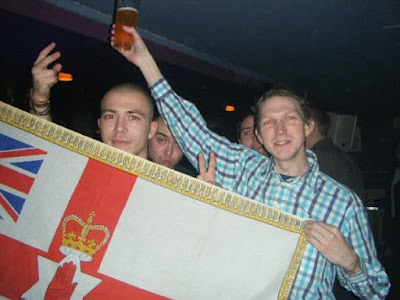 Luckily one of the managers was decent enough to provide the 3 or 4 of us who did work the chance of free pizza and drinks that night. I finished work around 1 am Christmas Day and we went straight to the town’s Klute Club to party. No photos of that night remain, but luckily I have a video of Oggy (Bulgarian), Rhianna (From Chichester or Brighton in England) and I working on the Ballroom Bar that Christmas Eve: 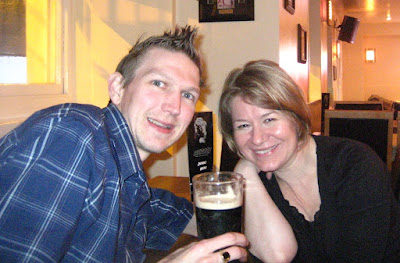 I had also been dating with a Blackpool FC fan for a few months, Helen, and we bought each other a few Christmas presents. The only time I had off to see her was New Year’s Day (though I had to work late on New Year’s Eve such was the party life of the Pavilion Theatre). So that made things quite odd for me. We lived a secret enough lifestyle as it was, she even went to watch Bournemouth with me. 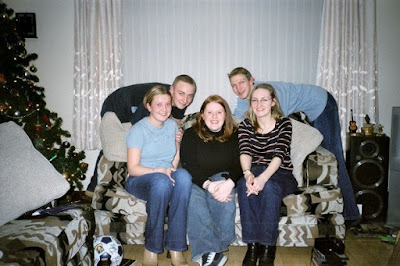 Plus it was my first proper Christmas not seeing my family, oddly I had lived away from Northern Ireland for more than 5 years, but had always had the time off to visit them at Christmas. It was kind of a family tradition to eat Turkey together. 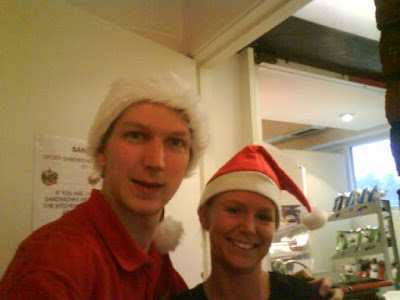 Also, something was stirring up in my mind and I didn’t quite know it yet – it’s possible I was already in love and didn’t know where life was taking me. At the end of November, the Costa Coffee Shop (or it may have been called Piacetto I cannot remember) had a brand new sexy young Hungarian lady working there. That was Noemi, from Debrecen. And since our meeting (incidentally a week after I had watched Hungary beat Northern Ireland 2-0 at Windsor Park), life would never be the same again. I was in love with her and that was the end of my normal life in Bournemouth…(a picture of the two of us there on Christmas Eve working together taken on my phone and the photo survives because I sent her it by text – I helped stock up the coffee shop that day amongst other things). 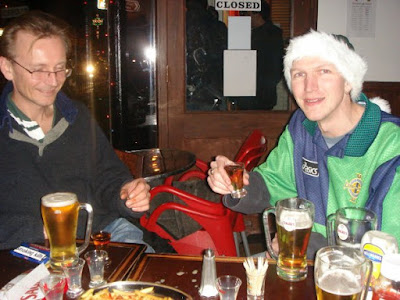 As I took many sips of beer that Christmas night with our international quarter – Gareth Kalejs (of Latvia and Australia equally), Oggy Oktay Ozlem (of Turkish and Bulgarian ascent) and Sam Keddle (a South African friend), I pondered on whether it truly was my last Christmas living in England and wondered where the hell I would be the following Christmas (It turned out to be Parramatta in Australia in 2009, then Machu Picchu in Peru in 2010, and Seoul more recently in 2011). I got wasted that night in what seemed to be a cold night in Boscombe, Bournemouth. Gareth, Oggy and I all made it safe and well for a long Boxing Day shift (it was busy in the Pavilion). 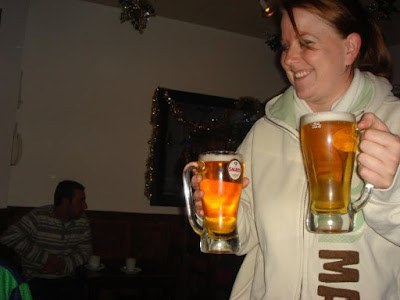 Christmas Night in Bournemouth was excellent. Though within a few days I would not see Oggy again, as he returned to Bulgaria. Within a few weeks I would not see Gareth again as he was basically an alcoholic and we stopped working together.  Within a few months I would also bid farewell to Sam, or Sexy Sam as I once called her. 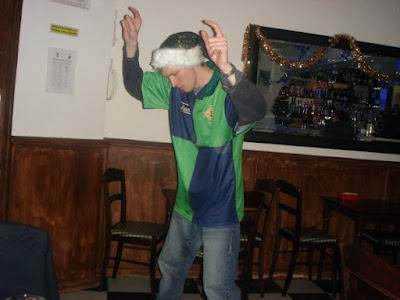 Thats me drunk in the Portuguese Bar in Bournemouth. 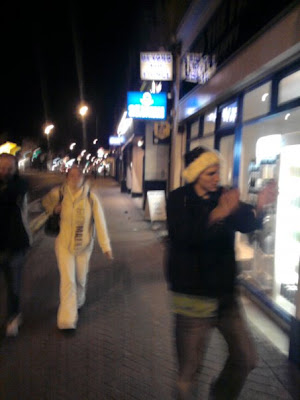 Thats me walking home to Sam’s place where Oggy and I stayed the night. Apparently I blacked out and fell asleep in the toilet while totally naked. I laughed at that as I served up the beers all day in the Boxing Day performances of Peter Pan. Christmas had passed me by quietly and a new era of madness was sure to arrive shortly after…I’m glad I’ve finally buried the hatchet with this one and written about it. The book is now closed.