Back in 1998 in those glory days when simply watching Northern Ireland playing football or getting pished down the Wins (Bangor) or the Monico (Belfast) I happenned to help with an election campaign. It wasn’t by chance and it wasn’t because I wanted to. It was just because I had just turned 18 and life in a politically divided Northern Ireland was important to me. In September 1997, I met Jack Beattie, who was a Castlereagh based Ulster Unionist who accepted me onto a course of Radio Production, Media Competences and so forth. Jack had me attending regular events in Belfast to watch Castlereagh Borough Council make announcements. I was there for the Dundonald Ice Bowl one, the opening of many shops and offices and more importantly I got heavily into my politics. Easter 1998 chimed into view and Tony Blair, Ian Paisley, David Trimble, John Hume and Gerry Adams somehow concocted “The Good Friday Agreement.” At the time I was a very proud British, Ulster Protestant Unionist, a Church go-er, a national fanzine editor and a Corporal in 10th Bangor Boys Brigade. In fact looking back almost 10 years on makes me jealous of what I had then. You know life drags you in funny directions. I think I was a crazier man back then. 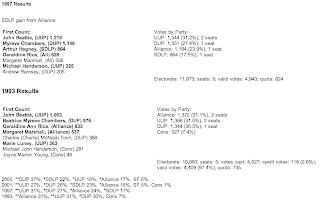 Anyhows, the Good Friday Disagreement as I liked to call it didn’t offer me a lot. I really wasn’t sure how giving nationalists so much power and a local assembly in Belfast would benefit me as a person. Nor did I really want EVERY political terrorist back on the streets!!! Surely the UDA, UFF, UVF and IRA would enter a war, of which I’d be part of. I didn’t want war, and this ‘agreement’ offered ‘peace’. Somehow it didn’t add up and I was strongly against the agreement. I sided with Jeffrey Donaldson, Robert McCartney and Ian Paisley. Jack Beattie also did, as did many of my Protestant friends. I voted against it. Suddenly I was dreading life again, when the vote past Stormont, or Westminster. I’m not sure if it went through the House of Lords, but then it must have done as it became law! In those days I was much more politically eager, but just a little less aware. Spending time in Belfast’s Belvoir estate, drinking in the city’s bars and viewing Northern Ireland as my endeared little world, I got involved with the election campaign of Jack Beattie. Jack had decided to stand as a Dissident Ulster Unionist (which was permitted, and many did it) in the Ards Borough Council area. That’s the constituency I was born in, but not where I lived, in the outskirts of Bangor. Therefore I couldn’t vote for Jack (I went for Bob McCartney of the UKUP and the other DUP standers in North Down). If I couldn’t vote for him, I wanted to make sure everybody else did. It couldn’t have been a nicer man taking that seat in the new assembly. And of course in a democracy all the people should be represented, even those Dissident Unionists! 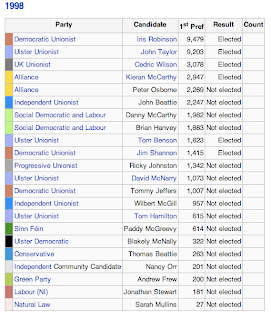 Being a Dissident Unionist to start with meant that Jack was up against some strong candidates and FOUR official Ulster Unionists. I’m sure John Taylor and Tom Benson were two of them. Either way, Jack had to get a seat for Strangford. There were 6 up for grabs, and the nationalist vote in that area is very low, so we expected an all Unionist turnout for the six seats. We kind of relied on working class anti-agreement voters. Of which there were many, but largely to side with Ian Paisley’s DUP. At the time that was a big contradiction, as they were neither Democratic or United (though really we all know Unionist is what it stands for, but we tried to add that in as a shit joke, I recall). I use the term ‘we’ very loosely. Jack will never deny my help in the campaign or my dedication. Instead of watching the World Cup, studying or doing shit radio shows at Belvoir Tech, I was helping with the campaign. We glued some amazing ORANGE posters onto many and various bits of wood, cardboard and billboards. I still have one somewhere in my possession. We handed out Union Fleg bearing leaflets. I basically glued some posters on, got some leaflets out and put them up (and took them down after the vote). It was great fun, and really moments to savour, which at the time I thought nothing of! How many people can say they helped with an election campaign when they were 18? Not many, and not only that I was doing it in Northern Ireland, not an easy place to discuss politics I’ll have ye know if ye don’t already. 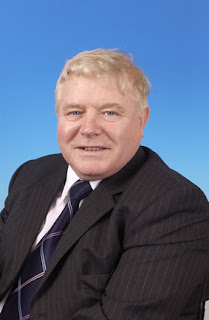 Iris Robinson and John Taylor were very likely to get elected. No surprises at the election count in Bangor when they both won on the first count. This was a Proportional Representation campaign, which we thought would help, but it screwed us over in the end. Jack Beattie (standing as John Beattie) got the SIXTH highest amount of votes! He pulled in 2, 247! In a First Past The Post System, he’d have taken the seat straight away. Sadly the transfer of votes within the Ulster Unionists went to Tom Benson and David McNarry, who pulled up after a few counts. Jack Beattie had then hoped to get some of Cedric Wilson’s transfer of votes as he was also anti-agreement. The day the votes were counted was a long one, having to wait until the ninth or tenth count (I will check this in my records and re-post) but Jack was eventually eliminated leaving Tom Benson and Jim Shannon with the final two seats, even though Jack had got almost 1,000 more first count votes. We also reckoned that having Thomas Beattie of the Conservative party standing didn’t help us. Some people might have voted for him instead, not realising. Sadly Jack lost out in a cruel way. He would have stood in the first Northern Ireland Assembly since the ceasefire, but missed out. The record books show he had the most first time votes than two who got elected. The election campaign had been good, we didn’t expect that many, but we were so close to taking that final seat and we bloody deserved it. Consolation came in the fact that Peter Osborne of Alliance got more votes and didn’t get in either, and the fact that three of the vote winners were from anti-agreement men. Even Jack’s mate Jim Shannon must have enjoyed his moment of glory. It wasn’t to be, but I was there when it wasn’t to be. It’s better to know you’ve lost than not to know you’ve won, eh?

Somebody has to lose sometime. Today was just Jack Beattie’s turn. My thanks to Jack for letting me be a part of it. God bless. Perhaps we’ll meet again some sunny Ulster day…