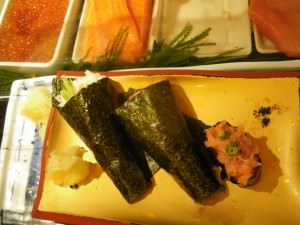 Yes it’s Friday and it’s time for Friday’s Featured Food once again. This time I recall my trip to Tokyo last year when I tried sushi in Japan for the first time. First of all I must confess I am NOT a food lover when I travel. I don’t have any must dos when it comes to food, I tend to go with the flow, these food stories are a lot more random and spontaneous that you would think. Sushi, is in fact one of my least favourite types of food. But on this trip I decided “well, I’m in Japan so I’ll try it”. Was it worth it? Definitely not!! Read on… 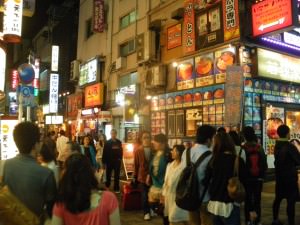 Downtown Shinjuku at night – lively, vibrant, a bit of sushi and exactly what you’d expect in Tokyo!

You’re going to tell me I can’t judge my entire Japanese sushi experience on one restaurant in Tokyo, aren’t you? But I can, this is my journey remember and I’m sharing my real honest travel opinions and stories with you. I headed to a district called Shinjuku which is lively and vibrant and has a few sushi and sashimi restaurants. I was travelling with my mate Neil and we wanted to try some decent local sushi. We asked one of the many PR dudes in the street to recommend one. It was a guy called Yoshi, who became our buddy for an hour or so and he directed us to this restaurant in Shinjuku called Kizuna Sushi. It was busy and on a prominent street (I waited until a quiet moment before taking the below photo): 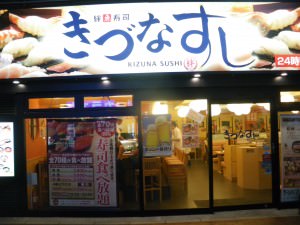 Kizuna Sushi – the restaurant where I first tried sushi in Japan. It’s in Shinjuku, Tokyo.

We sat at the bar and decided on a pick and mix from the menu. OK this option might be more expensive, but I was happy to try a range of sushi and sashimi that I knew I would like (at least to some extent) and pay a bit more for it. I expected to love it – as the Japanese are meant to be good at it. And even the fact that I’m not a food lover or a sushi lover probably didn’t matter as this was Tokyo – so it was bound to be good! 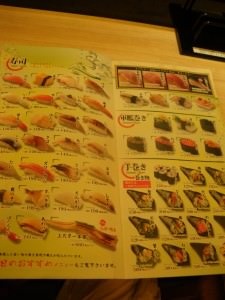 The menu at Kazuni Sushi Restaurant in Shinjuku, Tokyo, JAPAN.

I settled for trying about 7 or 8 types of sushi and sashimi, including eel, crab and salmon. I know I have written A LOT of detailed posts on food and travel before, but on this one, I don’t see the need to elaborate. It was a bit of salmon attached to a bit of rice, mixed with some green wasabi and brown sauce. The crab was the same. The eel was the same. Some of the fish was merely sliced bits of fish. It was all typical Japanese style sushi, but it did nothing for my taste buds. In fact it was merely the experience of trying it in a busy restaurant in Tokyo that remains my most pleasing aspect of it. 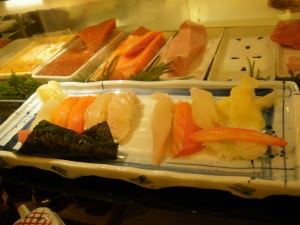 Amazing Japanese sushi and sashimi in Tokyo – actually it was bland and uninspiring!

I had tried sushi in a host of places before including England, Argentina, Australia, Hong Kong and Italy. The only difference with the sushi I had in Tokyo that night was that it was in Japan. Apart from that I wasn’t bothered. I did it almost ironically “just to say I tried sushi and sashimi in Japan”, of which I’m glad I tried but I wasn’t fond of. 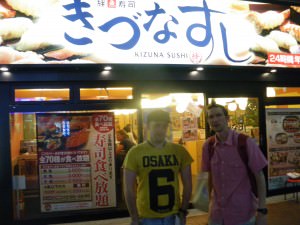 Neil and I at Kizuna Sushi restaurant in Tokyo, JAPAN where I tried and was unimpressed by the sushi. Thanks to Yoshi for taking the photo!

We left the sushi restaurant and headed back to Shibuya for an Irish Coffee. Would you believe that the Irish Coffee was better? Well it was. However this is my opinion remember and most people love Japan for sushi. I’m a cynic and to me sushi in Tokyo, Japan is just very over-rated!

A video of me feeling uninspired by the sushi!:

Friday’s Featured Food is a regular feature on Don’t Stop Living – a lifestyle of travel from a wandering Northern Irishman!