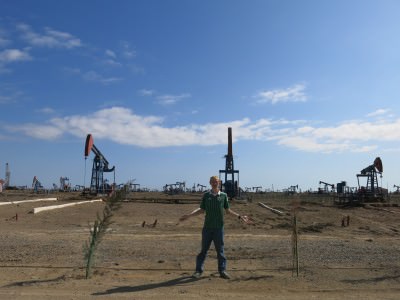 In the last month or so I’ve managed to visit two locations that were used in top films, without really intending to. I toured Petra in Jordan, which was used to film “Indiana Jones and the Last Crusade”. Then recently in Baku in Azerbaijan I went to the Oil Fields near Baku which were used to film the 1999 James Bond film “The World Is Not Enough”. While I’m not really a fan of films or movies, I do love a good James Bond film. I watched them all as a kid and teenager, and even kept up to date with the latest few Daniel Craig Bond Films. 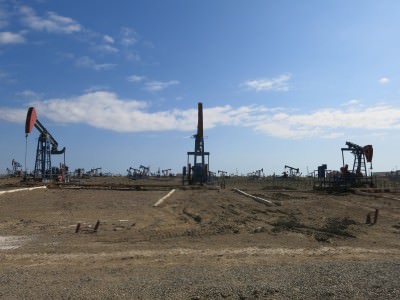 Where are the James Bond Oil Fields near Baku?

They are on the south west side of Baku, on the very edge of the city and the fields sit opposite the Caspian Sea.

How do you get to the James Bond Oil Fields near Baku?

Public transport doesn’t really go here (though bus 20 will take you nearby) and you might not find it easily by walking, so take the hint and hire a driver to take you there. We were staying in the awesome Caspian Hostel in the Old Town of Baku and our hostel owners can arrange a day trip for you which also incorporates a few other sites (Qobustan and Mud Volcanoes – which I’ll write more about separtely). 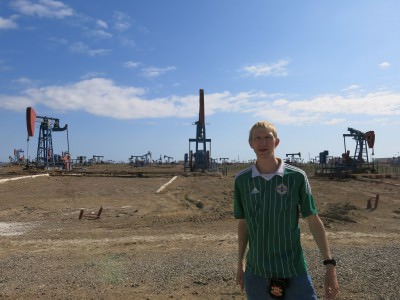 The World Is Not Enough was filmed partly here in Azerbaijan.

So ask your hostel workers to add in a visit to the “James Bond Oil Fields” and you should get to see it no problem. In a country where English is not widely spoken, mention the words “James Bond” to a local and they will know what you mean.

What is there to do at the James Bond Oil Field near Baku?

To be honest – it’s hop out of the car, admire the background that was used in the film, take a few photos and hop back in the car. Honestly that’s it! In fact it’s taking me longer to write this blog post than the amount of time we actually spent at the James Bond Oil Fields!! There is no information board, no posters of Pierce Brosnan, no entrance fee, no souvenir shop or anything. It’s just a load of orange, red and blue oil pumps working away. 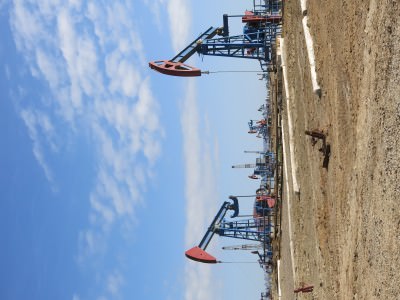 So I’d recommend it as a cool travel gimmick to add to your stories when you’re staying in Baku. Pierce Brosnan was once here. Here’s a video I took at the time of my visit (when I didn’t remember what Bond Movie was filmed here!! Yes, I had thought of Goldeneye and Tomorrow Never Dies but I was wrong!):

The Opening Titles and Song from The World Is Not Enough: