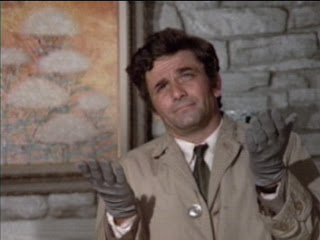 Seriously right, if you’ve never watched Columbo before, get into it. I must say I do not watch a lot of television, and when I do its normally older or vintage stuff (Only Fools and Horses, The Likely Lads etc..) and hence my fascination and addictation to the legend of the Los Angeles Police Department, the fictional “Columbo”, my favourite detective (leaping miles above Jonithin Creek, Pernald and Miss Marple, in my mad world of loving crime thrillers and detective shows). Basically Columbo started way back in 1960 in a murder mystery called “Old Rope,” with legend Peter Falk first starring as Columbo in 1968 (this is widely regarded as the start of “Columbo” as we know it). So what is Columbo? Its the capital city of Sri Lanka, off the Indian coast. BUT it is also the name of a very clever, witty, persistent and comical homicide (murder?) detective, based in Los Angeles, California, USA. He stars in long episodes, almost filims and there were a total of 11 series and various other carnations and special filimed over the years. The total episode count I got was 70, from 1968 right up until 2003. In all of these, the character of detective Lieutenant Columbo is played by US actor Peter Falk. 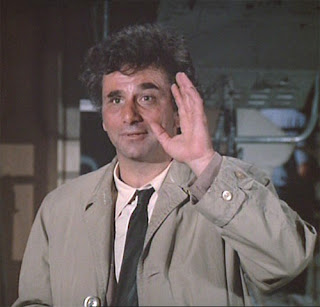 Each episode is so different, with different actors and actresses, completely different crimes to solve, completely different circumstances, alibis etc. The plots are amazingly well written and the addictability is high. If I had a day to kill, I could easily watch 20 odd back to back Columbo episodes! Each episode normally starts with a brief introduction to the main characters of that episode and then a murder, which we all see, and we all know who has committed it and how it was done. Then about 10 minutes in, after the Police have been called, in walks Columbo wearing a raincoat, smoking a cigar and looking like he has just got out of bed! He arrives in the least likely police vehicle ever, a 1959 Peugeot 403 Cabriolet convertible, which Peter Falk apparently selected personally, after seeing it in a parking lot at Universal Studios. This image looks to show a detective who is disorganised and clueless, however image is nothing as Columbo is the LA PD’s king of homicide. From the moment he meets the killer (or potential killers, or suspects), he notes every last detail, scrutinises things that most of us wouldn’t care about, such as finding incomplete key sets on floors, fake phone calls, phones off the hook, alibis that are so good there must be a hitch somewhere, and an endless amount of little details in a murder case he must solve. Basically if you’ve done a murder and the investigating detective is Columbo, you’re fucked, or should I say “Falked!” 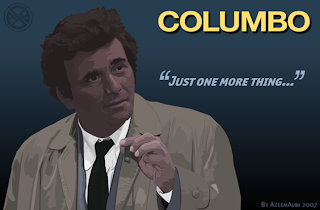 Guest stars such as Martin Sheen, Martin McGoohan and even Johnny Cash (who played a rock star who killed his sister and wife in the 1974 episode “Swan Song”) play murderers themselves, as Columbo questions and questions them time and time again getting to the root of the crime and solving it right at the end of every episode. The only predictable things about Columbo episodes are that:
1. Someone will die (usually a murder)
2. Columbo will solve the murder and find the murderer.
The rest of the episode is as unpredictable as you like, with Columbo even arresting the wrong person to start with and then his persistence will pay off in the end. 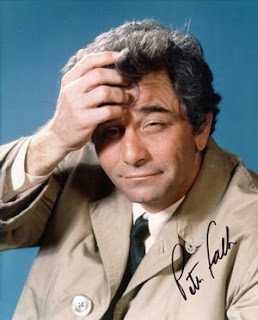 The acting abilities of Peter Falk are amazing, he plays the part as if its his real job, there’s really been a murder and he really does scratch his head thinking “how the fuck can I prove this guy did it?” Peter Falk adds a touch of class and many lines throughout the episodes are as comical as they are serious. At one point he asks a murderer “what did you pay for those shoes?” chatting away about normal things to as killer, also telling a murderer “my wife’s a big fan of your books, she’s read them all.” Indeed some of the crimes Columbo solves are local celebrities, from American football players to media tycoons to musicians to actors to authors and poets. The range of crimes goes from murder by strangulation, death by drowning, simple bullet killing, organised murders and murders made to look like suicides. Columbo is the man for all murders of all types in all places, well…in and around Los Angeles is his forte. Catchphrases are evident during Columbo’s long long reign on our TV screens. These include the obvious “Just one more thing…” whereby after asking the murderer about 10 questions, and making them think they are off the hook and Columbo is finished with his questioning, only for Columbo to mention one last question, which has telling implications, or just hints at the fact that he’s close to solving it. In fact, Columbo is almost like a friend of the murderer right up until they are proved guilty. Columbo sneaks into people’s houses, puts his cigar butts out in their lounges, appears on a TV show based on Home Cooking and even manages to disrupt the building of a new structure at a very high cost, just to prove there was a dead body buried there (the dead body wasn’t there, but he still caught the killer driving to the scene with the body in his car boot…). There is no end to the limits he will go to in order to solve a crime.

I still haven’t managed to watch every single Columbo episode, but am pretty close. In this modern age, it is easy to collect them on DVD, so I have been looking out for them on offer in HMV quite a lot and have managed to get 6 of the serieses on DVD for my constant amusement. I want to own the entire set, and like everything I am addicted to, I will NEVER tire of watching the same episode, even though I know how he solves the crime. I will endeavour to get as many more people into Columbo as possible. The guy is a genius, a comedy king, and in all seriousness Peter Falk’s playing of Columbo is one of the best acting performances of all time. Just as well we have all those back catalogues to keep us watching, just in case there is never another Columbo released. And what about meeting Peter Falk? 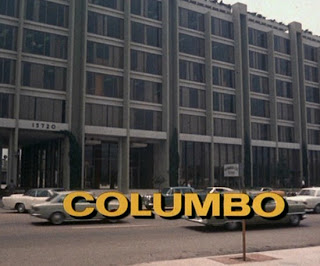 In 2007 when working in London for Bite PR, I read that Peter Falk (Columbo) was due to do a book signing at Waterstones Book Store in Oxford Street. Eagerly awaiting one of my favourite characters and actors, I happened to have that afternoon off work, however on phoning Waterstones, I was to learn that Peter Falk had cancelled the signing at the last minute. I’m not sure why he did, but I missed my chance to meet him! Maybe I will one day. While travelling round planet earth in July 2007, I also stopped by in Los Angeles, and though I did not see Columbo, I felt the need to get my photo taken next to an LA PD station, the home of the legend of Columbo. Right that’s enough of that, I’m off to watch 8 back to back episodes. Bring your Earl Grey and Cherry Bakewells…

8.1 Columbo Goes To The Guillotine
8.2 Murder, Smoke, And Shadows
8.3 Sex And The Married Detective
8.4 Grand Deceptions

10.1 Columbo Goes To College
10.2 Caution: Murder Can Be Hazardous To Your Health
10.3 Columbo And The Murder Of A Rock Star

S.1 Death Hits The Jackpot
S.2 No Time To Die
S.3 A Bird In The Hand …
S.4 Strange Bedfellows
S.5 A Trace of Murder – 25th Anniversary
S.6 Ashes to Ashes
S.7 Murder With Too Many Notes
S.8 Columbo Likes the Nightlife