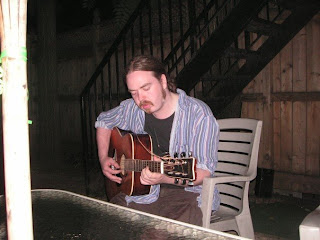 It is amazing and incredible how little things influence your day and your life, and how the people you meet have a particular bearing on something that happens to you. On my 2007 World Tour, the first night I turned up at the Planet Traveler Hostel on my own, in search of wisdom, people and culture. On entering my first room in that hostel on my trip, I met two amazing people, Tash and Mike Tivey. Both were English and in a band called “Milestone Method” (which I may have mentioned before). However it was only when we went to a free rock festival at Toronto Pier that I was to learn of this. Over a beer, Mike said “I’m in a band, proper guitar music.” I was intrigued, and over the next few days and nights in Toronto on spare moments, there would be me, Tash and Mike round the table joined by Mike Burkimsher, himself as fellow Brit and travelling back to the UK “the long way home.” Mike Tivey would pull out the acoustic guitar and serenade us with his obvious talent for a tune. Quite how moving and emotional the songs were was hard to fathom. Mike of Milestone Method casually played a wee song called “Maybe I’m On My Own Still (But At Least I’m Happy)”. Now I tell you this for nothing – that title itself is amazing, but having cheap red wine and even dodgier Canadian beer against a dark dark unwanted Canada sky while Tivey strummed this tune is as paradisical as your musical ears will allow. Let me big this song up, and not because I know Mike or enjoyed a beer with him in his un-noticed genius little world. Because the song deserves it. 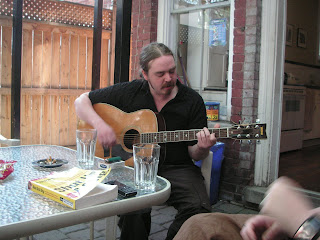 Sometimes in life we dwell on relationships and what might have been. If we end up alone, out of love, without that relationship, we can still be happy, we can feel relief that we’re not in one. I’m not professing I’ve been in enough relationships to understand this effect totally. But try listening to the tune below. The video there on my You Tube link is as it was, untouched from the recording that night in Toronto. Its a classic love song. The love has been lost, but the smile has not. Why would you want it to? The lyrics are simple and to the point as we hear that the persona suggests that if the after relationship is so good, then why doesn’t the girl who the (male) persona has broken up with call him and “tell me all about your new boyfriend.” There is no jealousy here in this ballad which I would argue sides with the male. But its music, and after all I’ve mentioned before music can be what you want it to. The song itself offers us an insight into the beauty of love “you’ve left my life for me now…” muses an undaunted Tivey in an almost “this is fucking great, but isnt it obvious” way that suggests Tivey’s own genius goes un-noticed. Life could last forever on a night in Toronto listening to Tivey strumming this one out. I remember it so vividly, great times, and someday you know I will meet Mike Tivey again and relive that dream. Except it wasn’t a dream; and it cannot be relived. Let the music take us higher… 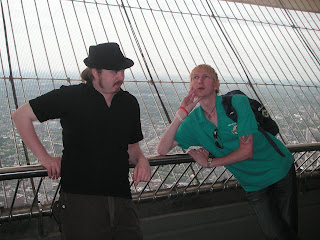 There is also a VERY RARE Mike Tivey live acoustic tune called “The Planet Traveler Song” which has only been played once, and that was in July 2007 in the back garden on the Planet Traveler Hostel in the Kensington Market area of Toronto Canada. The privileged few to hear the song that night included me, Tash and Mike Burkimsher (who geniusly filimed it). The song which again oozed reality from Tivey’s acoustic aimed a wandering hand across a foreign sky, questioning why we are far from home, but stating that we are still gloriously happy. The song, which was another poignant ballad in the same sort of mindset as “Maybe I’m On My Own Still” is only available by adding me on Facebook.com and then viewing the video which Mike took that night. 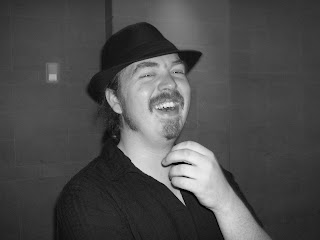 So add Milestone Method as a band on Myspace, download their songs, listen to the below acoustic version of “Maybe I’m On My Own Still” from You Tube and check this talent out. Good bands aren’t just the ones who sell a load of records and you hear their songs on radio. Good bands are just bands who are good. Simple as. Even if nobody has ever heard any of their songs. This song is now one of my all time favourites, and in a strangely personal way it also appeals to me. Definitely I am on my own still, but hey at least I’m happy!! Meet me and you’ll get a slice of this…

Band – Milestone Method
Based – Burton, England
Song – Maybe I’m On My Own Still (But At Least I’m Happy)
Available – from myspace, and a live acosutic video on You Tube 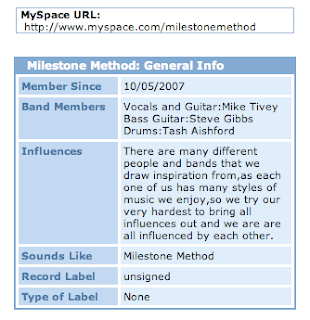