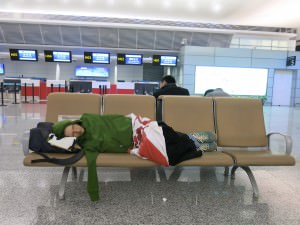 Don’t avoid the obvious when it comes to saving money on accommodation. You’ve already paid a lot for your flight so try to incorporate a free night’s accommodation into that, either before or after your flight. Today’s Monday’s Money Saving Tips is all about sleeping in airports.

If you’re flying early morning, why not get to the airport the night before, this has a few benefits:

1. You won’t miss your flight

3. You save money on a night’s accommodation

4. You save money on transport (some airports won’t have early morning buses or trains, meaning you save money by not getting the dreaded taxi)

5. It is an ideal place to update your travel blog

6. Airports become ghost towns at night and are a great quiet place to catch up on some sleep 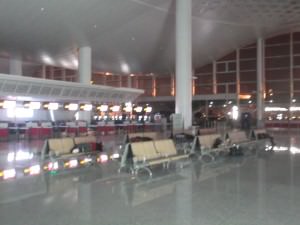 Airports are ghost towns and become an easy place to sleep at night!

If you’re flying into an airport late at night, why not stay there once you arrive to save money. I did this most recently in Hangzhou in China, arriving late at night. We landed just after midnight. No point in heading to the city so late so sleep at the airport, here are the benefits:

1. You won’t spend time looking for accommodation (which let’s be honest is a lot easier in daylight)

2. You won’t waste money on a night’s accommodation when you would only have been using it for a few hours anyway

3. You can take advantage of free settees and seats at the airport

4. It is an ideal place to update your travel blog

5. It’s safer to stay at the airport than head late into a new city at night 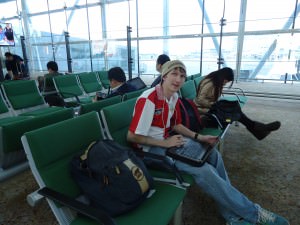 Getting a moment to update my travel blog on yet another airport stop over. Remember sleeping and spending time in airports isn’t restricted to only night time!

So that’s my take on sleeping in airports – I do it, my girlfriend does it and you will be surprised how many other travellers do it. It’s a great money saving tip. However there is one thing to note and that is that NOT every airport stays open at night so the negative aspect could mean you’re stuck at the airport’s front door, as has happened to me on a few occasions. Please note the below short list of airports I’ve slept at and airports I’ve been locked out at. These are the ones I remembered from my travels but there are lots more, I’ve merely listed the ones that stuck in my memory… 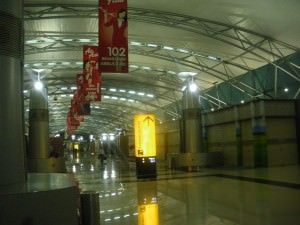 View from my bed in Jakarta Airport in 2012. Loving the free bed 😉

Some of the Airports I’ve slept at: 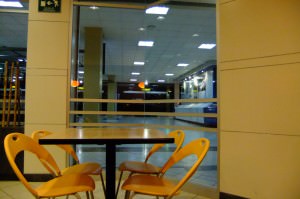 My view from a coffee and a laptop at Aeropuerto Mariscal Sucre in Quito, ECUADOR in 2010.

Airports that DON’T open at night:

– Sydney International Airport, Australia (yes, I was locked out and surprised they close at night) 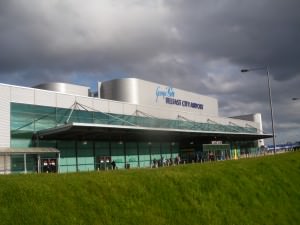 When sleeping in airports here are a few pointers:

– Bring warm clothes (it can get cold)

– Bring soft clothes or something to use as a pillow

– Safeguard your belongings at all times

There is absolutely no irony whatsoever in the fact that I am writing this live from an airport having just spent the night sleeping on the seats here, but it’s not a Monday so I’ve scheduled the post in advance 😉 Oh the life of a travel blogger…

Monday’s Money Saving Tips is a regular feature on Don’t Stop Living, if you have a product, brand or idea that you would like to feature on here, then please get in touch using my Contacts or Advertising page.

Here are a few of my hundreds of airport videos from YouTube:

Link to all my airport videos!