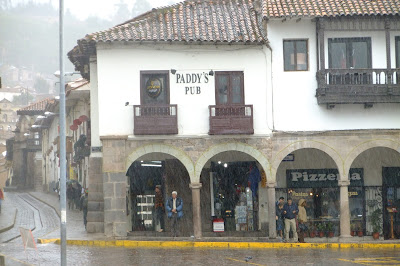 I make a habit of ending up in Irish Pubs around the Globe, they will start appearing on separate posts on here now too. Some people hate them, some people love them. But from having travelled to over 60 countries, I can safely say they are always the most welcoming, best decorated, most enjoyable and best experience of any type of pub in the world. I would say English pubs come a close second, but being a Northern Irishman, I can never resist popping in for a Guinness when I see an Irish Pub. This one, Paddy Flaherty’s (often just called ‘Paddy’s’) claims to be the highest Irish owned pub on the planet. It may well be, but about a week or so earlier, I was in the Wild Rover in Bolivia’s La Paz, which is clearly situated at a much loftier altitude. None the less, Paddy’s in Cuzco, Peru want to claim something, so let them have their moment. 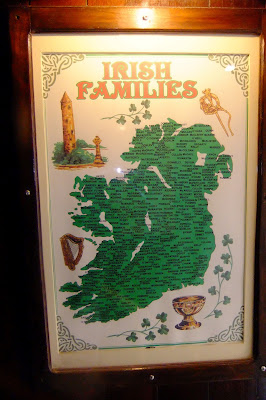 Irish Families north and south mentioned on here. These sort of random items are a part of every Irish Pub in the world. Some people cringe at the sight of them and call them “fake Irish pubs” or “wannabe Irish pubs”. On the contrary to that I enjoy these wee Irish items/gimmicks. 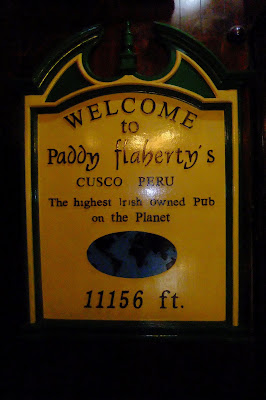 An elaborate boast on the welcome door. From the main street you dander up a flight of stairs to find Paddy’s. 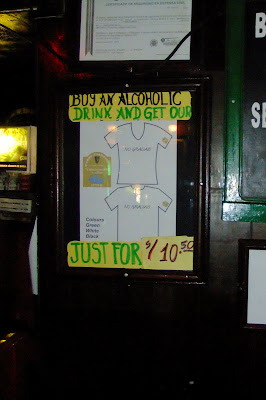 I couldn’t resist buying the t-shirt as a souvenir. It was only 10.50 soles. The only thing was, the T-shirt is black and says “No gracias” on the front. I have worn it a few times, but would have preferred a mention of the pub on the front (on the back a small font says the name of the pub and the fact it’s the highest Irish owned pub on the planet). 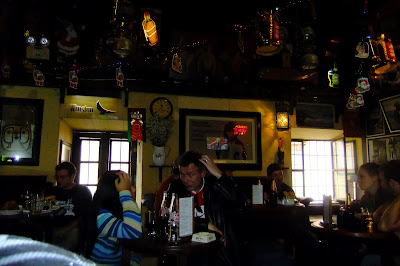 The customers were a mix of foreigners and ex-Pats – not many local Peruvians in there mind you. I didn’t visit at night time so not sure of the late night vibe. 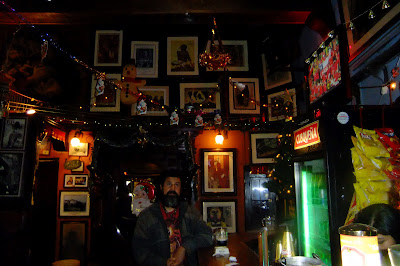 In Irish pubs the world over, there’s always some interesting character. At Paddy’s this weird guy with a big bushy black beard was their token “sit at the bar and drink all day” alcoholic. 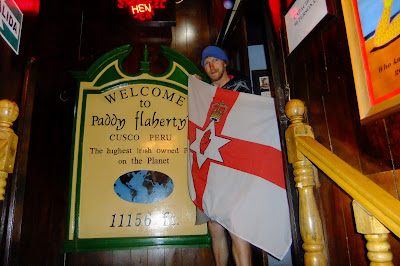 It would have been scandalous not to have whipped out the Northern Ireland flag at Paddy’s. I enjoy these moments of silliness. These photos were taken by the bar manager, a Peruvian. He did alert me though that the owner is Irish. 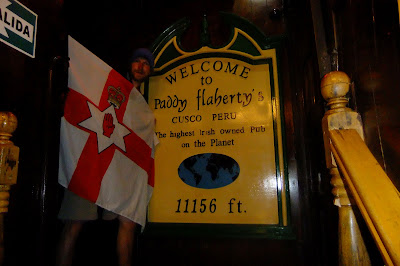 From low lying Bangor in Northern Ireland to an altitude of 11,156 feet above sea level here in Cuzco, Peru. 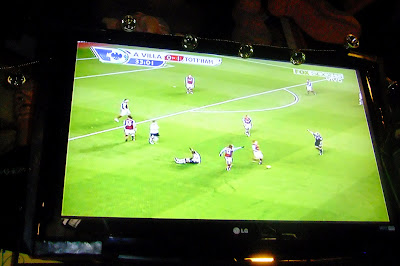 My visit there had the added bonus of live football – it wouldn’t be an Irish Pub without a wee bit of banter and sport on the TV. I lost enthusiasm for the English Premiership years ago, but watched the Aston Villa v. Tottenham match. It was Boxing Day. I didn’t carry a phone or have any internet but it was odd watching live in the southern hemisphere knowing my Dad would probably be watching the same match live in the northern hemisphere. It was late morning in Peru, this match was early evening or late afternoon in Birmingham, England. You know what I did watch the whole match, but can’t even remember the final score. I looked it up there now and Spurs won 2-1. As a Bournemouth fan, these teams can be hard to watch, knowing all their stars were bought for millions of pounds. 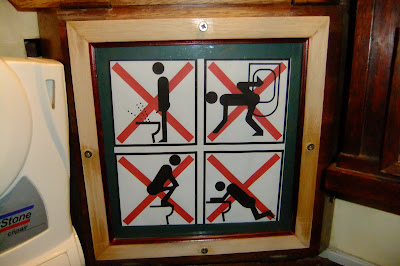 Irish people do humour, even in Peru. A comical “ways not to piss sign”. 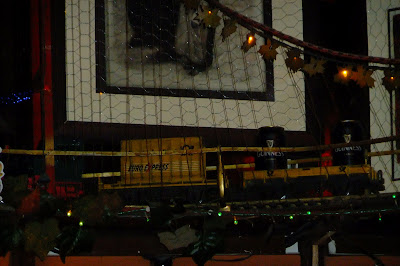 The pub had a random Guinness train constantly moving around above the bar. I loved that. Again, each Irish pub has a unique experience. 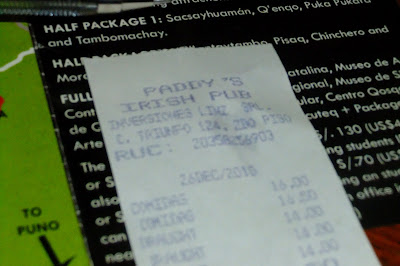 A receipt for my beer and t-shirt. It said RUC on it which made me laugh! That day I had left the hostel with just 15 Soles on me. That turned out to be about 3 Soles less than a beer and a T-shirt but I used my Northern Irish charm on the barmaid and she let me off with it. I even offered to “pop in later on” with the 3 Soles and she said “don’t worry about it – you’ve got your flag with you!” Result. 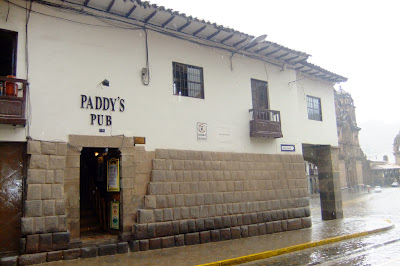 A Peruvian style entrance to an interior decorated Irish Pub. In true Irish style it rained and my reason for going in was also to remind me of home. I was travelling alone. Sometimes an Irish Pub with a bit of craic on the other side of the globe can be a Godsend. I spent 3 nights in Cuzco but never went in at night. I left it at just my lunchtime visit. I enjoyed it. Thanks, Paddy’s!


Location – Plaza De Armas, Cuzco, Peru
(In Layman’s Terms – basically on a corner by the biggest square in Cuzco)


Drink I had – Cusquena (Cuzco’s own beer – they did have Guinness in cans or bottles, but I stuck to the local stuff!)


ME AT THE BAR IN PADDY’S IRISH PUB IN CUZCO: