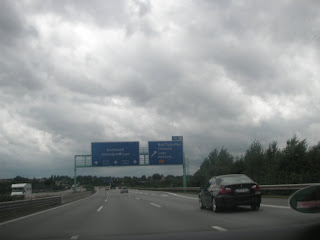 We left Hannover mid afternoon for a road trip through the rest of the Western Side of Germany, the short mid-trip through ‘The Kingdom of Belgium’ and a wee trip to Campeigne, north of Paris in France. It all began with a Pint of Harke Pils at Block House Pub in Hannover for a 10 am pint, after a brief breakfast and a Rumkugeln (Rum Truffle). I enjoyed my last walk round the city, photographing the parks, museums and university as well as the highly artistic tube stations.

Rene finished work around 12.37 pm, after that we headed straight onto the Autobahn. One thing I forgot to mention about Germany was the border between East and West. I passed this on a few occassions (not just in Berlin), and the most notable was the evidence still remaining close to Magdeberg at the border on the Autobahn, where a new road has been built to the side of the old border, where derelict towers give the traveller an insight into the past. No people man these extinct border controls, obviously, but it was interesting to see. One can only imagine a post Berlin Wall Communist East. Or not as the case for the want of nobody ever wanting it to happen may be. 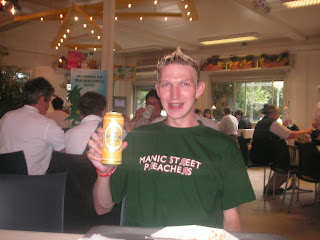 Anyhow the Autobahn has varying speed limits and at points, no speed limit, meaning Rene could cruise the freeways in his company car. Class. We also hit a few traffic marmalades (or jams), on the way between Hannover and Aachen. We passed through the most densely populated area of Germany, which includes Dusseldorf, Essen, Koln and Bonn (former capital of West Germany and a custom-built capital city). I caught a snippet of Bayer Leverkusen’s Bay Arena, but before I knew it, we had passed through Aachen and the signposts were now in French. I had crossed into Belgium. 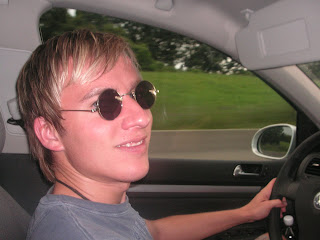 The first things we did in Belgium were to stop for food, drink, rest and petrol. This was somewhere north east of Liege. We ended up at a very small service station, which was extremely overpriced. I paid about £10 for a beer, spaghetti bolognese small portion, a Mars bar and a packet of sweeties. Ouch! The people are noticeably different as well. I cant really describe how or why, but you just notice! We found most people to speak Dutch or French, but surprisingly a lot of English speakers. It certainly did appear to me, that the Belgians can speak English, Dutch (Flemish version), French and German to a high degree. The only beer I’ve ever had in Belgium then is Kuppers Kolsch (which is German), so I’ll be sure to go back some day and visit the home of Stella Artois and the famous Belgian beers. We took a further stop in Belgium due to traffic marmalades. This was again for food at the most randomly located McDonalds of all-time. It was in the middle of a farm. The only thing that guts me is I took a photo of it, and it didnt come out, otherwise you would be able to see this random McDonalds. We also got lost in there and three Belgian dudes helped us get back on the main road to France again. As brief as my stay in Belgium was, I was there, I saw some awesome scenery (including little villages with Castles eclipsing a church in their skylines. 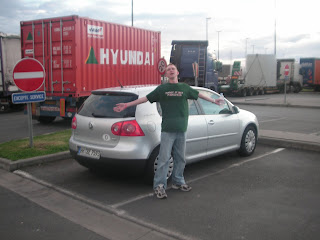 Then we got hit by a Toll Charge and by now we were in France. It was getting dark and Rene had done a hell of a lot of driving, so we headed to Campeigne where Rene was booked into a hotel (paid for by his firm). I hadnt booked anywhere as a skint traveller obviously, so snuck into Rene’s room anyway and slept on the other bed. A nice sleep and a beer in Campeigne (Hotel Mercure ****) and soon I was off on a quest for croissants and discovering France. Which part and where, I did not know!

Random Towns and Villages in Belgium we Stopped at – Eupen, Kettenis, Saint Ghislain

Strange Currencies – Germany, Belgium and France all now use Euros and Euro Cents.

Where I Stayed – Hotel Mercure, Campeigne (which was free as Rene’s company had booked it)

Average Price of a Pint of Beer – Not sure, say 5 Euros…though the beer in Hotel Mercure was 8 Euros a pint!

Moving Moment – Passing by the Belgium- France border and noticing the difference instantly.

Key Song – Robbie Williams – Advertising Space (dont know why, but it sticks in the head as one of the songs on the radio on route)

FACT – The official language of Belgium is French, Dutch or German. There is no such language as Belgian!