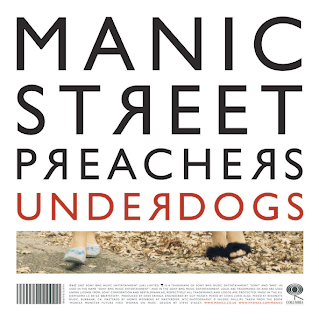 I’m surprised its taken me this long to actually do a full post on the Manic Street Preachers, probably my second favourite band of all time (behind Oasis). I’ve been lucky enough to see them 5 times (in 4 different countries) and own all their albums and most of their singles. Unlike Oasis, they take us to the other extreme emotion in life – the melancholy, the sadness, the sorry and the depression. If Oasis are my band for the good, vibrant, happy times, Manic Street Preachers are my band for “when times get tough.” I’ve had a lot of those times in life where I wanted to die, or lock myself away from the world and the horrors of life. Depression is a hard thing to deal with, and from rich to poor we all can experience this negative emotion. The Manic Street Preachers (even the band name has a certain sadness to it…). The band escaped the depression of working class Wales to slowly pave their way to success in the music industry. It was a long, hard road for them, but they did it, and their album archive and history serves as a true anthology to a band who mix intelligence, poetry, beauty, sadness and rock’n’roll all in one.

I first heard them on a chance radio listen back in 1993, when they hit a chart position of number 7 with a cover version of J,o,h,n,n,y Mandel’s “Suicide Is Painless.” In those days seriously, I was listening to the usual pop mix of Simply Red, 4 Non Blondes, REM and Crowded House. A real rock band with intelligence didn’t strike me. And so fast forward a few years to TV show “Game On”, when the character Matt sang depressingly to “From Despair To Where” live in the living room using a lamp. That song stuck, as did the memory that this was the same band who sang so bitterly about Suicide. It wasn’t until 1996 when a school mate, Colin Palmer bought “A Design For Life” that I properly got into the band and slowly but surely I collected all their back catalogue of albums and became obsessed. The filled the void when Oasis were gone and they helped me through tough periods in life. I guess being a member of the church (Presbyterian in Bangor, Northern Ireland) helped me too, but on hearing other people’s open-ness and singing about depression to the rest of the world, it opened my eyes up. I wasn’t the only one. We all get depressed. The Manic Street Preachers openly admit it and write about it. The first 3 albums are by far the best. Its likely I’ll give a review of them all properly at some point, but basically the first album, Generation Terrorists was an epic 18 track-er and was meant to be the band’s one and only album before they split up and died in a rock’n’roll cliche. It didn’t sell the millions they expected, but the album stands tall as a classic. Songs such as “Motorcycle Emptiness”, “Methadone Pretty” and “Repeat” are true classics. Guitar riffs, inspired lyrics and the need for belonging all touch your tender bones whilst listening.

Generation Terrorists was soon followed with the even more depressing “Gold Against The Soul”, an album which spawned 4 incredible singles, from the “kill yourself” obviousness of “From Despair To Where” through to the sorry soul in a hospital ward (“Roses In The Hospital”) we find ourselves gripped by the sorrow which touches on the realities of life. Its not all a beautiful world out there. I’ve been sad and down on many occassions, and suicidal. I’ve hurt myself before and songs give us inspiration. Think REM’s “Everybody Hurts” and tell me you’ve never shed a tear in life. You’d be a liar, in most cases. The second album also contains the rocky “Sleepflower”, an eloquent ballad which pumps a beat through your soul leaving you empty. You cannot always wear a smile in life. Some of our smiles are false, and as the Manics once said “in the beginning, when we were winning, when the smiles were genuine.” The next album in their cannon was 1994’s “The Holy Bible”, the darkest album of all time. The bleakness touches on lack of food, suicide, prostitution, US gun law, the horrors of the Holocaust and Stalin’s regime. Using backward ‘r’s and their knowledge of world history, the Manics delivered this truly dark album to leave us all worried about the state of guitarist Richey James Edwards. Richey suffered from depression and wrote openly about it, his lyrics were bleak, obscure and bizarre and he was seeing doctors about his health and alcoholism. It came as no big surprise in 1995, when he disappeared completely on the eve of the USA tour. He hasn’t been seen since and has been declared officially dead.

The story of the disappearance of Richey James Edwards is an intriguing one and a real rock’n’roll mystery. Nobody has seen or heard from him since 1st February 1995, when he left his car by a bridge in south Wales and disappeared. He may have done the ultimate disappearing act, or he may have committed suicide. Nobody really knows, and the band were obviously deeply distraught by the news and the lack of news or police investigation into their friend’s disappearance. But they came back with a bang, and that is when I got properly into this band. Aged 15, I sat in my bedroom as the Manics hit the number 2 chart position with “A Design For Life” and their album to cover up the past “Everything Must Go” went platinum. Suddenly they were a massive band. Over the next 2 years I picked up all their albums, a host of their singles, some videos and tapes (pre- DVD era you young ones!). I also got put on their mailing list, went to two gigs (one at Slane Castle, Dublin and one in the Ulster Hall, Belfast) and wrote some articles for the many Manic Street Preachers fanzines around at the time. I even had some English and Welsh pen pals through my love of their music. The next album had mega hit single, “If You Tolerate This Your Children Will Be Next” on it, and they finally had a number one hit, a BBC documentary and were a mainstream rock band. Albeit without the genius of Richey James Edwards. The fateful ex-lyricist and guitarist.

Since 1998, it hasn’t been quite as good for the Manic Street Preachers, they really did hit a peak around that time, however May 2009 promises a new album. Since then three proper albums, “Know Your Enemy”, “Lifeblood” and “Send Away The Tigers” have built up their song archive with some good songs (but many average ones) and two compilations, “Forever Delayed (the greatest hits)” and “Lipstick Traces” (B-sides and rarities) have continued to inspire me. There have also been some DVDs, one off singles (Christmas Ghost and Umbrella being two I recall) and solo albums from Nicky Wire and James Dean Bradfield. I’d like to thank Manic Street Preachers for their songs and inspiration during tough times. Times are very tough for me at the moment, I’m in depression again, feeling at a low ebb, needing inspiration and the Manic Street Preachers will not get me through it, but at least I can still crank on a song like “From Despair To Where” and feel bizzarelly uplifted.
They are the ultimate depressive rock band. Here’s some stuff on them. Go buy them records!

1. Motorcycle Emptiness
2. Yes
3. This Is Yesterday
4. A Design For Life
5. So Why So Sad
6. From Despair To Where
7. Suicide Is Painless
8. Your Love Alone Is Not Enough
9. Condemned To Rock ‘n’ Roll
10. Of Walking Abortion

Motorcycle Emptiness (Live on Top of The Pops, 1992)

KEY MANIC STREET PREACHERS LYRICS (I could go on and on…)

“life lies a slow suicide”
“in the beginning when we were winning, when the smiles were genuine”
“under neon loneliness, motorcycle emptiness”
“pretend there’s something worth waiting for”
“my idea of loves comes from a childhood glimpse of pornography”
“i am an architect, they call me a butcher”
“spirit so low that i no longer pretend”
“on the streets tonight an old man prays with newspaper cuttings of his glory days”
“ive poisoned every room in the house”
“mussolini hangs from a butcher’s hook”
“i stare at the sky and it leaves me blind”
“this happiness corrupt political shit”
“everlasting nothingness”
“suicide is painless”