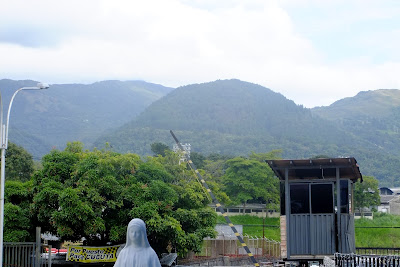 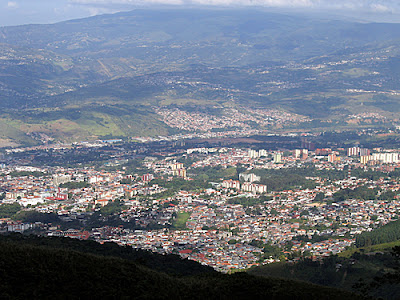 On the way into San Cristobal I got some cracking views of the city following outrageous border control checks and searches. 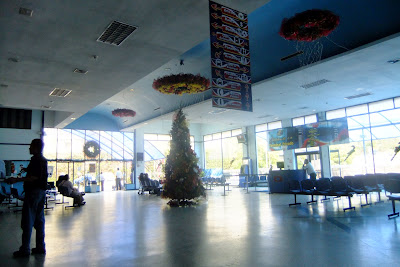 And so on arrival I was at one of the city’s two bus stations. This one was mostly for buses from a company called Expresos Occidente. It was thanks to Angel that I had ended up here. I told him it was my desire to get to Caracas, and he was headed to Maracay and would also get a bus from here. 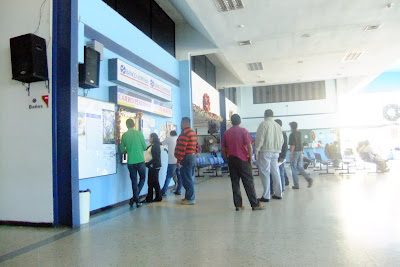 I had to trust him, as he was my only hope basically. I had NO Venezuelan money at all, which was definitely a mistake from myself, and one I don’t normally make, but it had all been a big rush. So my first task was to find money – a cash point or an exchange place. This bus station had two cashpoints. One was broken. The other one didn’t accept ANY of my cards (neither my Australian, British or Northern Irish cards – neither Maestro, Visa, Cirrus or Mastercard). I was fretting as I needed a bus desperately. I had US dollars on me – $35 worth of them. But Venezuela has a dodgy black market so I didn’t tell Angel I had this money at the start as I assumed I could withdraw money on my foreign card. The bank cash point was called Banco Sofitasa. 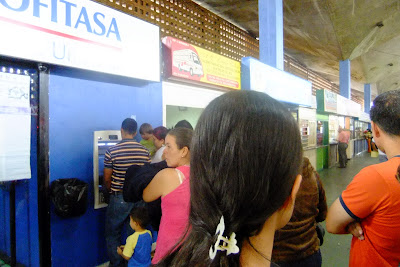 So Angel (which by the way should be pronounced Ann Hell in English) took me outside on a 10 minute walk to another bus station and shopping mall that he knew of. I was able to leave my big rucksack in the first bus station in San Cristobal while we went for the walk,but I carried my ripped backpack on my back with all my valuables in it. We got to the cash point in the other bus station and it was packed. It was also Banco Sofitasa. The queue was so long. I lined up, tried ALL of my cards to no avail. I simply couldn’t get any money out at all. And it was quite intimidating too as people behind me in the queue were getting angry with me trying multiple cards. 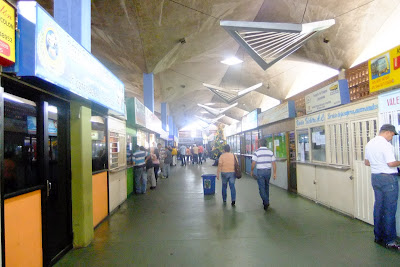 This was the shopping mall within the bus station where I was unable to get any money out. 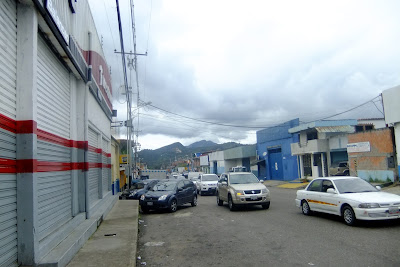 So Angel then walked me out past a market and onto this street to a bank that was open. The hope was that I could withdraw money over the counter, especially on Visa or Mastercard I had hoped. But all my cards were overseas of course. And this was VENEZUELA. A country with enough troubles in the finance industry. Once that option was declined, Angel was probably at breaking point with me – he had gone out of his way just to help me – a blatant foreigner. I felt safe with him, but without him would have struggled. 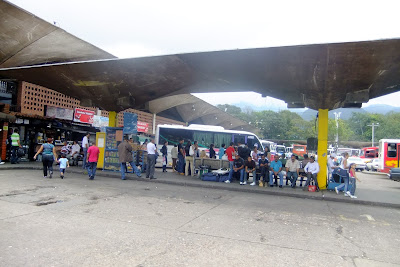 So then I told him I had 30 dollars worth of US Dollars (in 3 x 10 Dollar notes). Of course everyone that travels round South America will carry US dollars. And straight away he knew an option. Round the corner from the other bus station (pictured above) he walks into a warehouse with my US Dollars. Now seriously I put my trust in Angel, and I’m not normally like that and sure enough he got a deal for me and suddenly I had some local money!! In the end he got me 240 Bolivares. I’m pretty sure it wasn’t a great deal but it was my only chance! I could now get my bus to Caracas!! 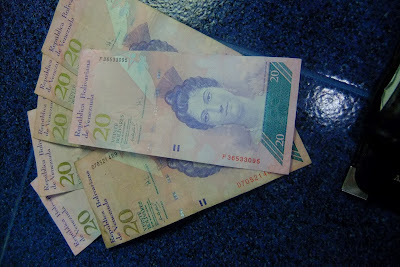 The Bolivares I had left after paying for my bus ticket to Caracas. I also had to give Angel some of the money as he had been to kind to me and I bought him an orange juice and myself a coffee before we said our goodbyes. He almost forced me to give it to him, but I would have done anyway as I had invited him for a beer. He ended up using a different company to get a bus to Maracay, so we said our goodbyes at San Cristobal bus station (the first bus station we had visited). I thanked him and I was alone again. I actually was also relieved to get rid of him in a way. He had served his purpose for the day and I just wanted to get to Caracas now. 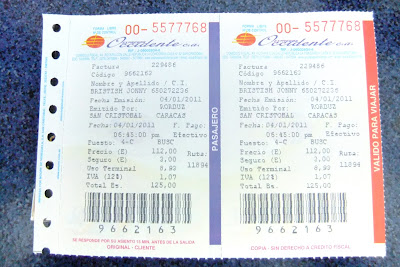 But I was so happy that I had my ticket for Caracas. Similarly to my last bus ticket in Colombia, this had a funny name on it, I was now known as BRISTISH JONNY (yes, not BRITISH JONNY, but BRISTISH!). The bus ticket cost me 125 Bolivares. However the earliest bus with a seat to Caracas was now at 6.45 pm and it had just gone noon. I had a lot of time to kill but was really unenthusiastic about seeing the city of San Cristobal. 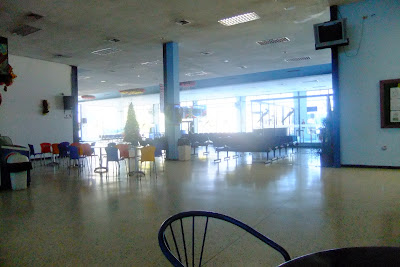 First up was time for a beer. And I needed one. At least I assumed a country this shite and this corrupt would at least have a licensed bar at the bus station. But alas, they didn’t so I had a non alcoholic Malt Beer. 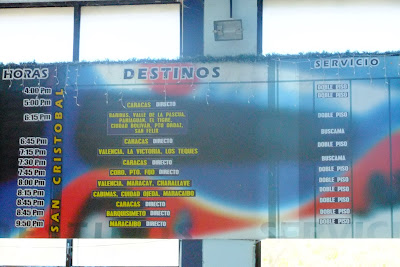 The destinations coming up. Mine was the 6.45 pm Directo service to Caracas. The 5pm bus was full. 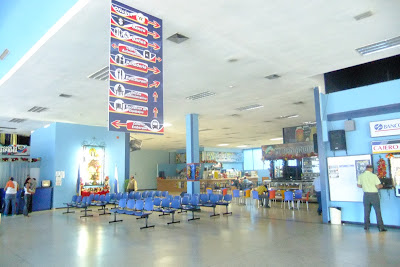 The restaurant, waiting lounge and cash point at San Cristobal bus station. This was the quieter bus station of the city’s two that I visited. Which was probably better for me as I just wanted to relax. 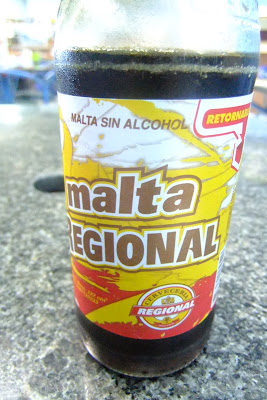 My Malt beer without alcohol! Gotta enjoy it for what it’s worth. Apart from my bus ticket, this was the first thing I bought in Venezuela. I wasn’t actually that hungry just yet anyway. 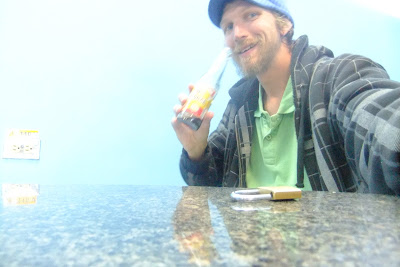 The first photo of me in San Cristobal, and the first photo of me in Venezuela except for the border  photo at San Antonio del Tachira. Taken by myself of course as I was travelling alone. In the rush of things, I didn’t even have a photo of or with Angel my friend from earlier. That was kind of a regret, but at least I was safe! You can see my smiling in relief that I was Caracas bound after the border checks and money problems. Phew! If only it was a real beer… 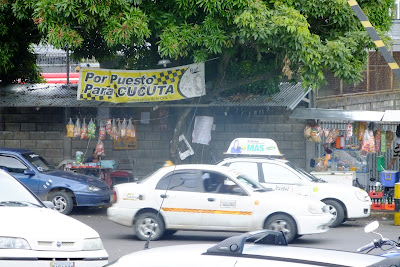 After that “beer” I had a wee walk around the streets with my ripped bag. Because of the size of the rip I couldn’t afford to walk around a lot. The size of the tear increased even during my short walk and I certainly didn’t trust leaving it with the guys at the bus station – if they nicked anything from my other bag it was only clothes, but this one had all my valuables in it including my hard drive which had EVERY photo from my last 3 months of travel on it, and I hadn’t put them anywhere else. That’s the main reason I didn’t want to venture out much and there was no point booking a hostel for 6 hours. The highlight of my short walk round San Cristobal was seeing border taxis for Cucuta (I was now an expert at that route!) and the view up into the mountains where I had come from. (that photo I took is the first photo on this report). 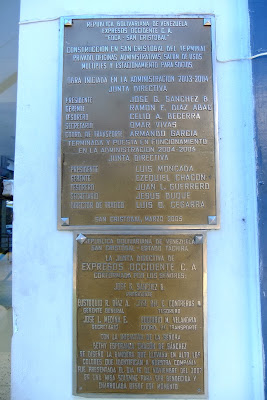 This plaque marked the bus depot itself. And apart from that I just read my book, updated my notes and listened to my iPod relaxing inside the air conditioned bus station. The time passed by relatively quickly anyway. 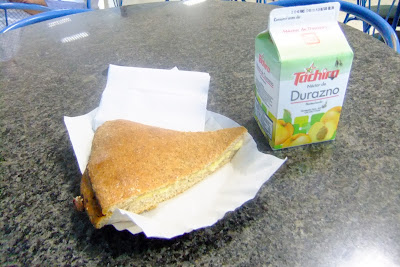 Late afternoon I got hungry and went for a peach juice and an odd cheesy roll. Venezuelan style. It did the job to be honest and I was able to order it in Spanish from reading the menu. 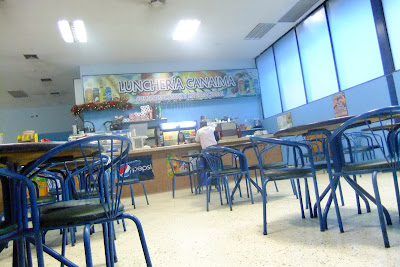 The wee restaurant was called Luncheria Canaima (also the name of the national park which boasts Salt Angel) and it also had a plug socket so instead of wasting time I could charge all my things. I didn’t talk to anyone while relaxing there – odd for me. But I was content and I knew what my next steps were – head to Caracas. Then get a Visa for Suriname and do all the sight seeing I wanted in Caracas before heading to Port of Spain and Paramaribo in the tropics! 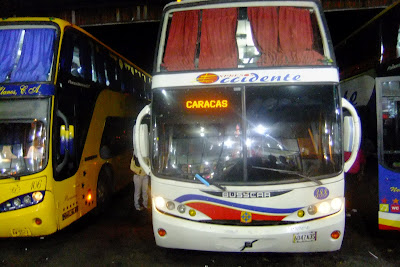 Time passes by and my flashy double decker bus arrives only a wee bit late. To be honest I was shocked by its quality. It looked like a decent bus. I was expecting a wreck. 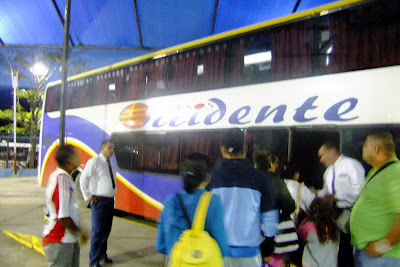 It’s obviously full and my seat is 4A. My seat doesn’t actually exist, adding to the frustration of the entire day. The bottom floor has seats 1 – 20 but no 4A as that’s where the staircase is. Upstairs then has a gap with no seat number next to 3B. So I simply sit down on the seat with no name, assuming it has to be 4A. I hear nothing more of a complaint from anyone and I’m in my seat. Darkness has fallen on San Cristobal and I sense an air of wonder and freedom. Oh the joys of random travelling. I was happy with my seat on the double decker. Comfy, reclining and I’m sat beside a Venezuelan youth. I don’t talk to him or trust him but he reads as well and gets on with his business. We leave just after 7pm and San Cristobal has become a distant memory. Like the angelic spirit of Angel, San Cristobal had served its’ purpose. 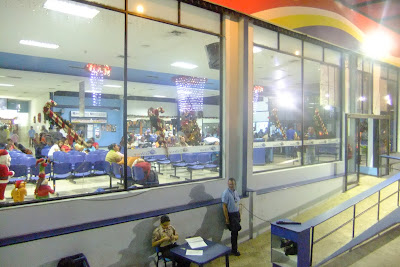 View looking back into San Cristobal bus station from my seat 4A on the Espresos Occidente bus service to Caracas. 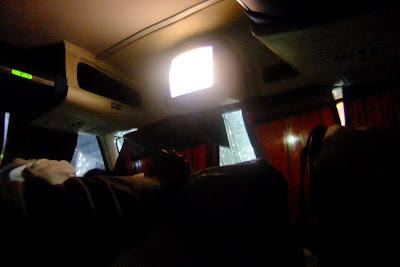 View of the TV and inside of the bus from my seat 4A on the Expresos Occidente bus service to Caracas from San Cristobal. 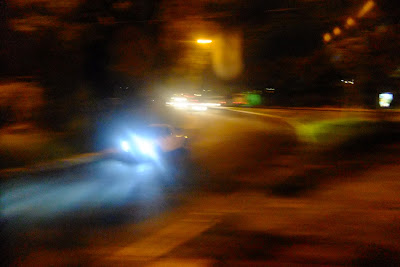 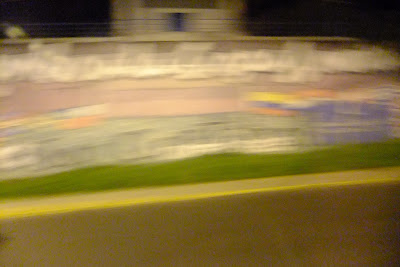