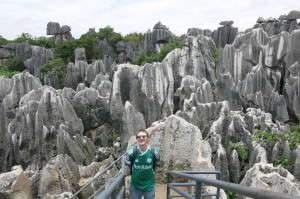 A visit to Shiling Stone Forest in China’s Yunnan Province is well worth a trip. This place became a UNESCO World Heritage Site in 2007 and has a thriving tourist economy. The downside is the cost of getting there, the up side is you get to see a forest comprised of fantastic rock formations. Go with your nomadic heart and make the trip out to it, like I did just 2 days ago! 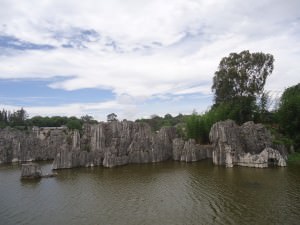 The lake at the entrance point to the Stone Forest in Shilin, China.

How to get to Shilin Stone Forest

It’s a really decent day trip to do from Kunming, so I’d have to recommend staying in Kunming and doing it in a day. Yes, you can stay at Shilin but it’s more pricey and the Stone Forest will occupy a day of your time at most. You can get it over and done with in a matter of hours, however the buses to and from Kunming take between 1 and a half and 2 hours each way. So factor that into your journey. 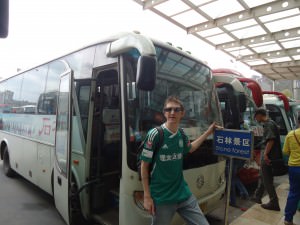 Boarding my bus in Kunming for the Stone Forest at Shilin, China.

From Kunming East bus station get yourself on a bus to the Stone Forest. It will not be written in English anywhere until you reach the sign in front of the bus.

Buying a ticket in Kunming is hardly straight forward but you’ll get there…make sure you have Stone Forest Shilin written down in Chinese.

So to get there you need to have the writing in Chinese for it and show that when buying your bus ticket, or else speak decent Mandarin Chinese. As with most of my China trips, I was with my Chinese girlfriend, so it was easy for me. 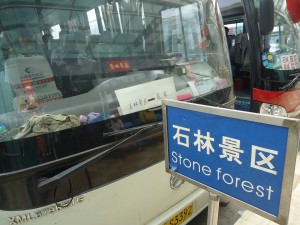 The only sign you will see in English is the one in front of the bus – well at least you know you’re on the right bus.

The bus journey costs 27 RMB, but they try to add on an extra 1 RMB for insurance. Do your best to avoid paying the insurance. Just buy single tickets there and back – they depart pretty regularly and go straight from Kunming East to the Stone Forest entrance.

What is Shilin Stone Forest?

It’s a countryside location full of karst geological rocks. To be honest, it’s not something I have seen anywhere else on the planet. That reason alone will be enough to take your wandering soul there. I’d recommend it, despite the hefty price tag… 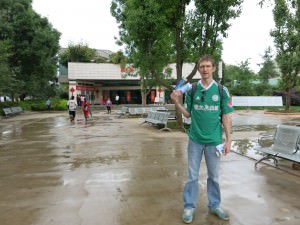 With my tickets at the entrance to the Stone Forest in Shilin, China.

How much does it cost to visit Shilin Stone Forest?

OK once you’ve arrived by bus from Kunming (or elsewhere), you’ll be shocked to hear of the price to entrance the site at Shilin. It’s 175 RMB (Chinese Yuan). That’s just for the ticket and you can buy that and walk on down to the entrance no problem. However if you want to get the motorised cart to the entrance and back it’s an extra 25 RMB. And yes they do check the tickets. 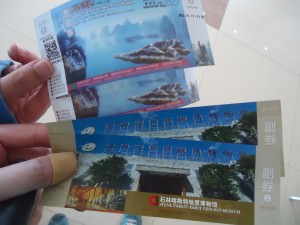 Our double tickets for visiting the Stone Forest in Shilin, one for the entrance itself, the other for the motorised cart. Total of 200 RMB per person. Ouch!

We were in a rush the day we went so had no option but to get the motorised cart, which is an extra 25 RMB. While it pained me to pay it, at the end of the day it’s only £2.50 sterling, and I’ve paid more for a beer in a pub over years…if you walk it, I’d say it won’t take longer than 20 – 25 minutes to the win entrance. The motorised cart also takes you around the site quicker, if you want to relax with the wind in your face for 20 minutes as well you can.

What are the main sights at Shilin Stone Forest?

If you’re big into rock formations, then you’ll marvel at the different shapes of the rocks – there are some special ones to check out including an “elephant”. Ridiculously every rock has a name.

Backpacking up to the top of the viewing platform for a view over the “Stone Forest”.

For me the best part was walking up the steps to the viewing platform near the centre of the Stone Forest. This offers a great view of the “forest”. On route we also passed by the “heart” or the centre point of the stone forest. You’re supposed to touch it for luck, according to the Chinese, so I did. 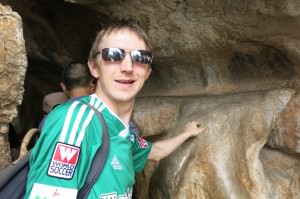 Touching the “heart” of the Stone Forest – a sacred stone in the middle of the forest.

The Lotus Pond, the mini Forest and the circle tour (on motorised cart) were the other things we did. I did really enjoy it, but unless you’re massively into rocks, I wouldn’t recommend spending longer than 6 hours here in total, just my opinion. 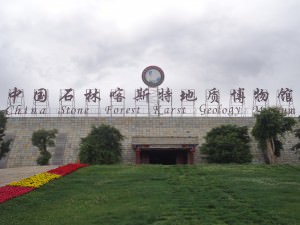 There is also a museum you can visit inside the grounds.

There is also a museum, which we didn’t actually go into – yes I know we paid and shoulg have done, but these days I don’t go to places just for the sake of it. Neither myself or my girlfriend were particularly interested in the museum part. 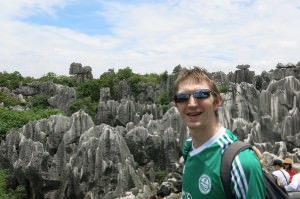 Loving the view of the Stone Forest from the viewing platform.

How long should you spend at Shilin Stone Forest?

If you’re a rock freak, then probably all day. We found that 3 – 4 hours was sufficient time to climb through the rocks, check out the views and tick off all the major attractions. Like I said 6 hours is probably too long… 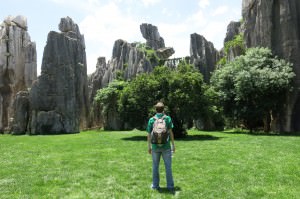 Backpacking to the Stone Forest in Shilin, Yunnan Province, China.

What else can you do at Shilin Stone Forest?

Eat. There are a few restaurants and the only other real option is eating. It will cost more than in Kunming. China’s tourism agencies seem to have gotten wise to the fact that these are popular tourist sites and as a result, the prices have gone up. 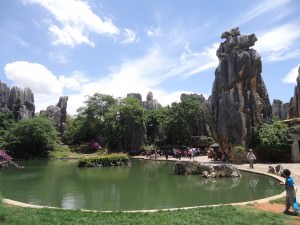 This photo is a pond at the “Minor Stone Forest” which is on the edge of the main Stone Forest.

Birdwatching. Apparently there are a load of cool birds to be seen.

You can also go bird watching in and around the Stone Forest.

You can also buy all sorts of souvenirs including stones and gems. 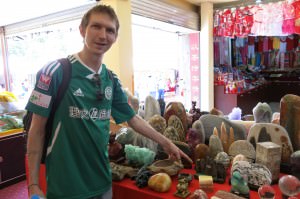 I didn’t buy any souvenirs but I did have a look at the gems and stones available.

Don’t buy Coke, water or souvenirs inside the park itself. Just outside things are half price. A Coke was 10RMB inside, so we avoided it and bought a bottle outside for 5RMB. Take suncream and rain protection in your backpack as this area is exposed – there are no mountains in or around the stone forest at Shilin.

My Videos from Shilin Stone Forest:

Arrival at the Shilin Stone Forest: