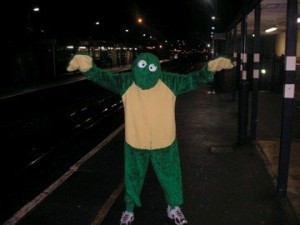 Next train to Charing Cross please!! The Day I…Dressed as a frog on the London Underground System.

I spent a year living and working in London, and a fair bit longer travelling there to and fro over the years. It’s a city oozing in passion, but it’s all a bit too “business like” for me. Full of people in suits and briefcases, people with phones that do stuff only computers used to be able to and it’s also full of “wannabes”, but I still love London. For the pubs, the underground system and the mates I made there. 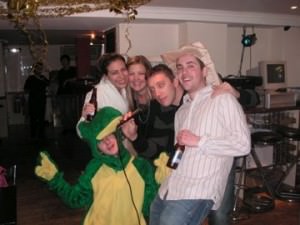 Having a laugh with my work mates in 2006 for a fancy dress party.

When 2006 reached an end it was time for a work fancy dress party so I was in Weymouth a few weeks earlier and saw a discounted frog fancy dress suit for £15 so I bought it. On the last day of work before Christmas I left my house at 7 am dressed as a frog. When I caught the 7.07 am Slade Green to Charing Cross train I certainly raised a few eyebrows. People on the London underground are often way too sensible. Breakfast at Benjy’s in Embankment attracted odd looks then I boarded my District Line train to Ravi C P – Ravenscourt Park. I worked in Public Relations for a cool company (highly recommend them, both client wise and to work for) called Bite Communications. Ben White at work agreed it would be a fancy dress day at work. 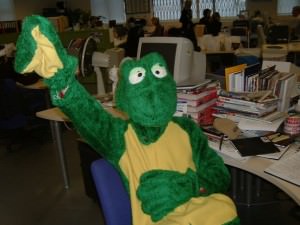 I got into work before 9am and worked the entire day at my office desk dressed as a frog. Nothing spectacular there. After work drinks in the Raven pub at Stamford Brook and again more attention just because I was dressed as a frog. All day I was proof that image and perception is a load of balls – you phoned me and spoke to me that day at work and there was me, sat sipping an Earl Grey tea while dressed as a frog. After the Raven it was Chinese karaoke, then time for my double train trip home. 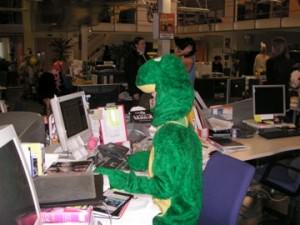 Normal day in the office: Jonny Blair working in PR in London dressed as a frog

I actually lived in Kent at the time (Dartford) and had a bit of a commute to work and back. I had a quick beer at Embankment while dressed as a frog. People didn’t even find it that funny. Believe me it was. A frog walking into a pub and ordering a beer while wearing a frog head on his head will ALWAYS be funny. 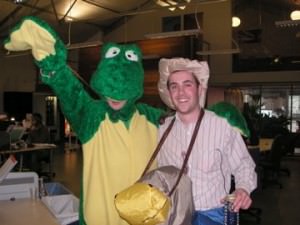 With Ben White on his last day in Bite UK in the office in Ravenscourt Park, London.

On the way home on the Charing Cross to Slade Green train, I started talking and having a really sensible conversation with an Indian guy in a suit. He was wearing a suit. I was dressed as a frog. We got on quite well. When the train stopped at Slade Green station, I got off, walked home dressed as a frog and that was that. 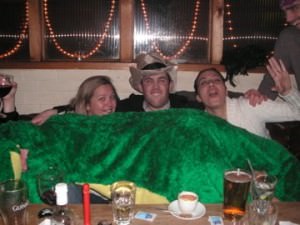 You might not find it funny at all. That doesn’t bother me. Some people found it hilarious. I LOVE it when people break out of the norm. I’d encourage you all to do the same. Apart from going naked in Antarctica and dressing as a pint of Guinness, I haven’t quite reached those heights since. “You’ll never change what’s been and gone”.

I found this link funny, which came up first on a search for office people dressed as a frog. I hasten to add that even Super Mario had a bit of sense…

And by the way if you have followed my blog Don’t Stop Living since day 1 (in August 2007), yes this story is a bit of a repeat, as it first appeared here: Jonny Blair as a frog.

But for my new readers and for my latest series of The Day I… it just had to be re-written about. Even the Beatles remastered their old songs 😉