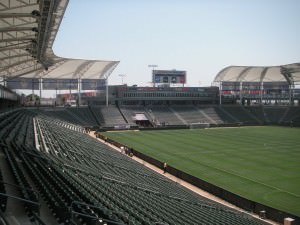 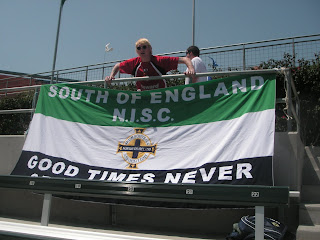 When I booked my world tour, I knew I would not be missing much of the UK football season, as I would be away for July, August and September. However as part of the tour, I found myself in Los Angeles. I had always been a fan of David Beckham – footballer, gentleman, celebrity. He applauded the Northern Ireland fans after we bate England 1-0 in 2005. In 2007, he left Real Madrid to join Los Angeles Galaxy. I wondered would I happen to catch a match during my time in LA. I did no research into this sort of thing, until I arrived in LA and bought a copy of the LA Times. There was a short piece on LA Galaxy and I asked at the hostel for directions to the stadium. Nobody I spoke to had a clue David Beckham was even in town, or where the stadium was. The stadium is the Home Depot Center, on the very edge of Los Angeles in the Carson area. My quest to get there as a sun bate down on me was a long and scary one…but a David Beckham training session was on the agenda. 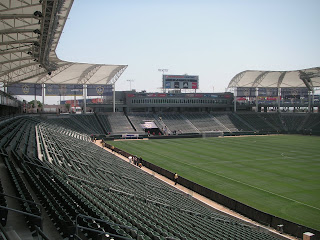 I left the hostel around 10 am, catching a bus from Venice Beach (I bought an all day ticket for about 6 dollars). I was supposed to get off at 4th Street junction and change there. However I was on my own and was actually quite unsure of where I was heading. LA wasn’t exactly heaven and the shanty towns would make Northern Ireland a country of mansions. Firstly I asked every person I could where the stadium was. Nobody had even heard of David Beckham never mind the LA Galaxy Stadium. Some guy told me to go to The Rosebowl (American Football venue) and another to the Baseball Stadium. I knew they were both wrong. As was I, when I stupidly exited the bus at 4th Avenue, instead of 4th Street. There I grabbed some lunch in a dodgy black ghetto and had to wait almost an hour for another bus which would hopefully head downtown. This was to be the weirdest and scariest bus journey of my life. As I waited for the second bus, I was getting strange looks from very poor black kids, probably because I looked as if I had money, even though I didn’t. I didn’t dare take any photos or videos on the journeys that day, as I was worried that I could have been mugged. In fact this is the only time in my life where I’ve felt like that. And I didn’t enjoy it, I kept looking out the window at the sights and hoping the bus would find the Home Depot Center very soon. 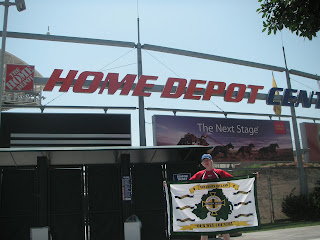 We stopped in downtown LA, where I departed the bus (which was all black people, driver included, except me!). I then waited for another bus, which went to Carson (the last stop on the edge of town). I’d have to endure a 80 minute bus journey which stopped at every stop, and only went about 18 miles!! It also drove us right through the Compton Estate, which was much scarier looking than Belfast’s Shankill or Bangor’s Kilcooley. You wouldn’t have felt at home there. I was the only white person I saw for the duration of the journey and nobody seemed to be going to Carson. At one point I wondered would I even make it there, or did the third bus of the day even go there! I was wearing an AFC Bournemouth shirt that day. It was an extremely hot day (as LA is) and I did actually enjoy seeing the ghettos of Compton, as hoardes of black kids dressed like Tupac Shakur crowded onto the bus (where I finally managed to get a seat) refusing to pay, and banging Gangsta Rap music through ghetto blasters (no pun intended). Still it came to the last stop announced the black female driver and I had to get off. Luckily it was the edge of the Compton Estate by that point and I was in Carson now. I dandered down the road to Dominica Hills posh-er area and the superb Home Depot Arena, appeared out of nowhere and with not a soul in sight. I had only travelled all this way to the stadium just to see it, to blag my way inside for some photos and to buy a souvenir in the shop.

At the front entrance I met a young lady (absolutely gorgeous she was – with that LA charm and accent) and her boyfriend. They told me David Beckham was arriving soon to do his first ever LA Galaxy training session. I couldn’t believe it! Really? The one day I decide to travel there, with no directions, no media hype or nothing, and suddenly I find out that the entire LA Galaxy and Chelsea teams (they were on a pre-season tour) would be there that day! Excellent. It was by now after 1 pm, and I took time to eat some lunch and grab a beautiful Budweiser. I got into the stadium no problem and for free! Then I met some UK journalists from the Sun and the Mail. They asked what the hell I was doing there in a Cherries shirt and a Belfast accent. I explained the whole story, and so did they. I explained to them about my world tour and that this stop was a mere coincidence. I then asked a steward if I could put up the South of England Northern Ireland Supporters Club fleg, which I had brought (and Beckham noticed….later). They were taking photos and doing interviews at David Beckham’s first ever training session for LA Galaxy. They spoke to me and took some photos of me and the fleg. I’m not sure if they ever made it onto TV, internet or newspapers. Perhaps I’ll search one day. My fleg was the only fleg in the stadium at David Beckham’s first ever US training session! I got some looks and some people came up and spoke to me, using the word ‘soccer’ instead of football. I love the way Americans say “wow, Northern Ireland.” If a female says that to me its often orgasmic… 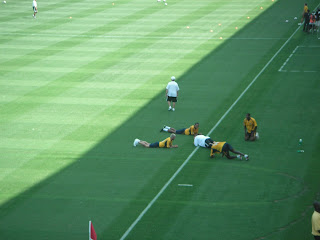 Then the LA Galaxy team came out to mass applause. I was 20 yards from David Beckham at one point and I also recognised Landon Donovan and Cobi Jones (ex of Coventry). They trained for about an hour and it was a great, relaxed way to enjoy a Monday afternoon, on the other side of the world. I couls have sank 10 pints of Budweiser as I wilted in the American heat. I resisted due to the price of the beer and drank my water. Chelsea then came out to train and I recognised most of them. There were a lot of Americans wearing Man United, Chelsea tops etc. Keen to see their heroes from the TV. I didn’t actually have any ambition to hang around for autographs or photos with the players. There’s a photo with me and David Beckham in the background and some close ups of the Chelsea players. I also shouted David Healy to David Beckham at one point as he jogged round. He acknowledged me and had noticed the fleg. That was a nice gesture and that was good enough for me. I also picked up 3 programmes (one for my kid brother and 2 to keep – a rare souvenir I had reckoned). It was then that I met a guy called Steve, who was sat on his own reading the paper and admiring the free soccer. When I told him I supported Bournemouth and came from Northern Ireland, he was very intrigued. “Let me tell you of the time when I met Bestie….” he continued, and hit me there and then with a sensational story about George Best. Steve had met George Best once in a bar in downtown LA, enjoyed drinks and chat with him. “A gentleman” said Steve. It’s funny to me how life and fate take your life on funny twists. Its almost meant to happen. Basically, these are the ifs that would have meant I would never have met Steve:
– If I hadn’t gone on a world tour
– If I hadn’t decided to go to LA
– I David Beckham hadn’t joined LA Galaxy
– If I had went to the stadium on a different day
– If I had sat in a completely different location in the stadium 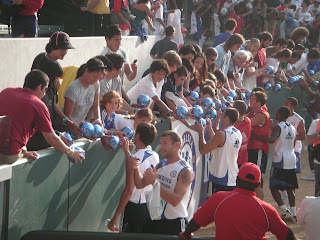 Meeting Steve gave me one of those memories that will stick forever. Steve had noticed an article on Sports friendly bars in LA in the LA Times (I got to keep a copy of his paper – still have it). He said to me “That’s The Underground Bar there, that used to be Besties, thats where I met George Best.” Other people’s wisdom and stories never ceases to amaze me. We then watched the final part of Chelsea training, Steve introduced me to a guy in a green jacket, who is very famous as the USA’s leading sports commentator. For the life of me I cannot remember his name! Like a local Jackie Fullerton or even Ray Stubbs. I told Steve how I had gone through the dodgy black estates to get there to the stadium. He said he would never get those buses and that it was a brave move! Steve then said “I’ll give you a lift back to the hostel, and we’ll do a detour via George Best’s old bar.” Absolutely fantastic. We left the Home Depot Center in Dominguez Hills or Carson headed onto the freeways and there we were…off to see Bestie’s Bar! In reality life doesn’t get more random, fun or spontaneous. Talking to people is easy. There’ll be another blog post on my visit to Bestie’s at some point soon.