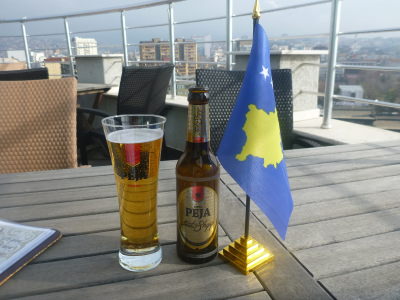 Kosovo is one of the world’s newest countries. Born back in 2008 when they were granted their long desired freedom from Serbia after some horrendous acts of ethnic cleansing. It’s a country that is essentially part of Albania, though for political reasons and to appease the Serbs, the name of the country is the Republic of Kosovo. They have their own borders, flags and passports. Currency wise they use the Euro. Serbia, Russia and China don’t recognise the country’s existence while USA, Taiwan and Northern Ireland do. After my stay in Skopje, Macedonia I crossed into Pristina and booked into my dorm at the Buffalo Backpackers ready to explore Pristina. 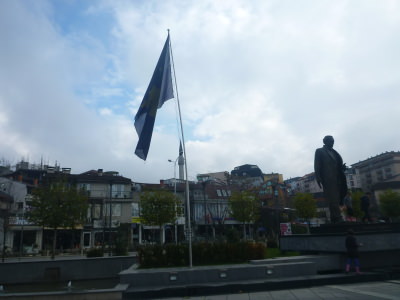 It was a Saturday night so my first question in the country of Kosovo to the hostel owner was “where’s a good bar to watch the football?” And off I went. During my short couple of days in Pristina, I visited 5 cool bars so rather than make it a top 5 (as I wasn’t in Pristina long enough to become an expert), here are the 5 I visited and loved. It’s a thriving city worth at least a night of your backpack! 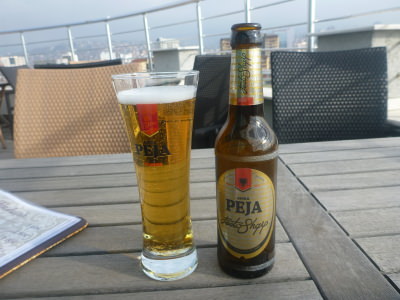 1. The Back Garden
OK so the Back Garden was my favourite bar in the city. It is partly owned by an Irishman John and a Scotsman Ian and has an international happy vibe to it. 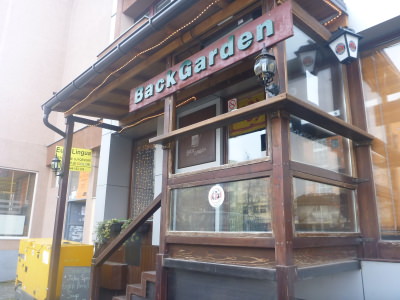 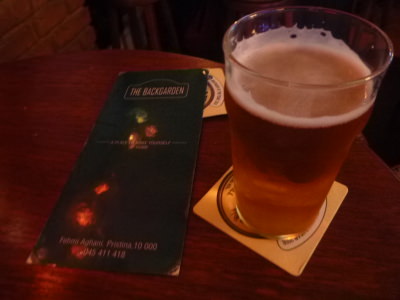 Pint of Peja for 2 Euros

I pop inside, the bar staff are all from Kosovo and really welcoming and friendly and I order a pint of Peja lager, at €2 Euros. Pretty good. Manchester City v. Everton is on TV (Man City won 1-0) and the other two screens show rugby and the Bayern Munich match. 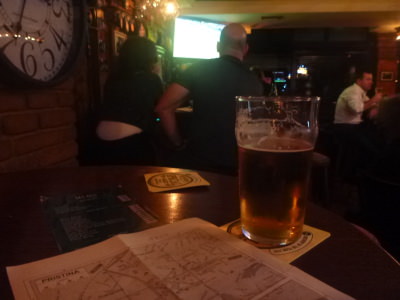 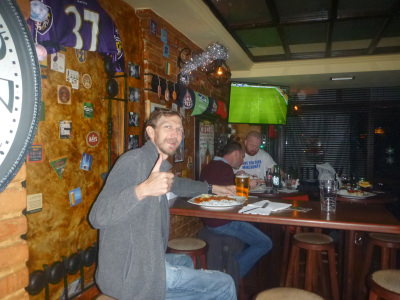 Watching the football with beer and curry in Pristina.

There’s a birthday on for one of the regulars so the chef cooks everyone in the pub a curry!! It’s complimentary, as is a shot of Scotch whiskey which follows. 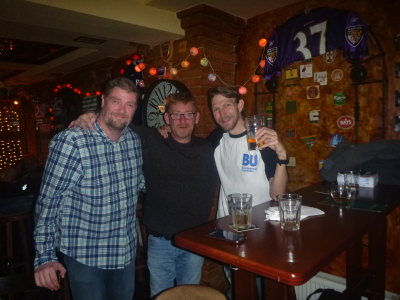 With Ian and John – the owners of Back Garden.

2. Half and Half Bar
Another football sounding pub, this cool relaxing lounge is the work of a local entrepreneur who saw the gap in the market for a half cafe/half pub style place. It’s pretty chilled out here and they have local Kosovan beer as well as great coffee. 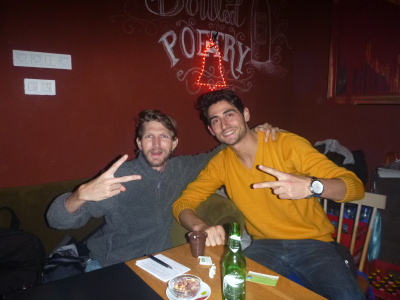 Half and Half bar in Pristina. 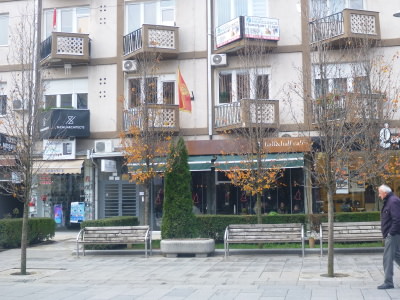 Half and Half Bar

3. Moving Restaurant
This Bar on the top floor is easily the best view in the city to enjoy a beer. I came up around lunchtime and had my lunch here on a hot December day admiring the views. 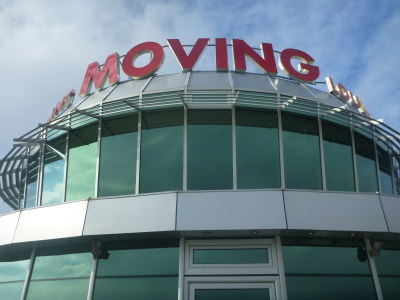 Pristina has a population of a few hundred thousand and on a clear day, the city sprawl up into the mountains can be seen clearly. 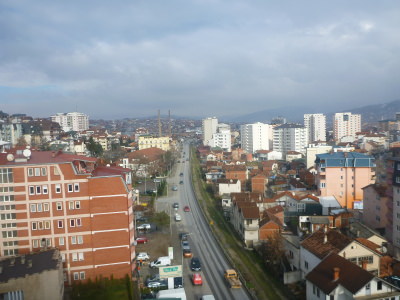 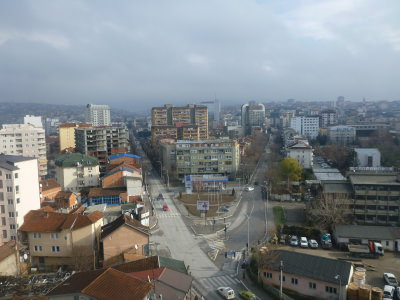 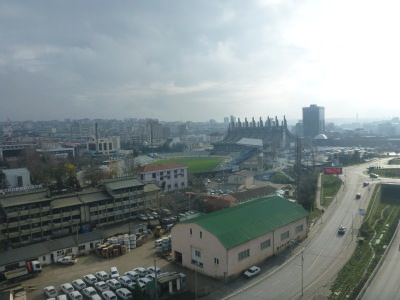 I got chatting to the chef and waiter and had some Albanian bread called Pogaqe and sour cream with a Peja beer. Beers are €1.50 and food is from €1.50 and up. 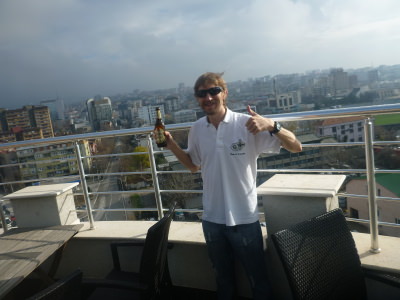 4. German Christmas Market
OK so you’ll have to be in Pristina in December time to catch this one and be as lucky as me but a cool Christmas Market of wooden huts was there in the square by the Grand Hotel. 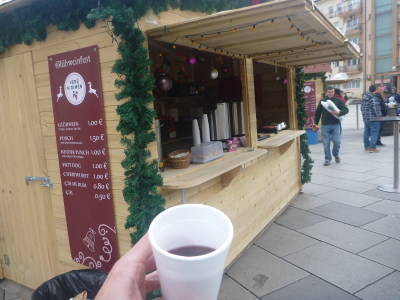 At €1 Euro for a glass of beer of a Gluwein, I couldn’t turn it down after a day of busy backpacking through the city! 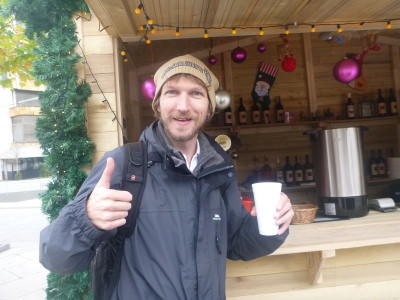 Gluwein in the German Xmas Market in Pristina, Kosovo.

5. Prn Arena – Stadium Bar and Cafe
I always try to visit a football stadium in a capital city I travel to. While I was there I met a cool guy from Austria, Paul and we decided to head into the bar for a drink. It was morning though so we opted for coffee but a full alcoholic beer range in offer here in this cafe which would do well on matchdays. 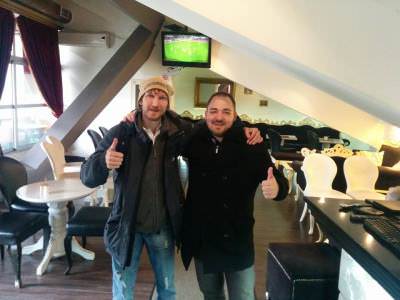 With Paul from Austria in the cafe by the football stadium. 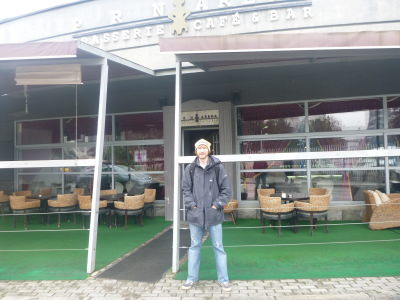 Places like Kosovo, Iraq and Transnistria should no longer be seen as “danger zones” for travel. And for a night out, Pristina definitely hits the spot – it will surprise you, just as my nights out in Pyongyang and Iraqi bar crawls did.