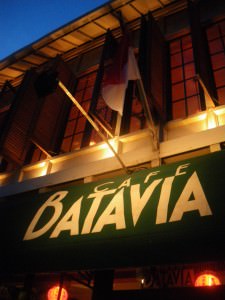 Cafe Batavia in Jakarta – great to relax away from the pure madness outside!

Jakarta in Indonesia is just colossal! My visit there last year was a good one. We got around the city a fair bit and were amazed that it has both posh shopping malls and dingy slum markets with huge contrasts between rich and poor. It was undoubtedly our trip to the harbourside slums that stands out as our lasting impression of Jakarta. Just after that it was happy hour and time for a beer. We all know Indonesia is cheap for boozing, but we really wanted to see the famous Cafe Batavia. What is it? 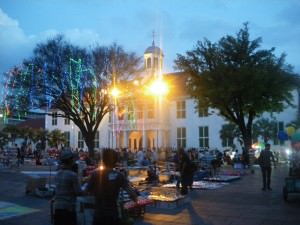 An elegant bar overlooking the Taman Fatahillah in Jakarta. The Dutch colonised this country and in the Old Town Square (Taman Fatahillah) remnants of that colonialism still remain in the form of Dutch style buildings. The area is known by Kota and is easy to reach by bus from anywhere in the city. We stayed at Hunny Hostel in Harmoni. 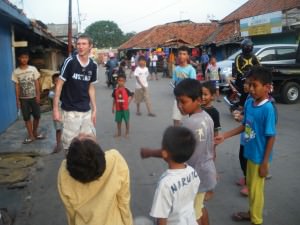 Playing football with the kids in the slums by Jakarta Harbour.

So after playing football with kids in the slums and generally breathing in the city’s varying odours, we arrived at Cafe Batavia. 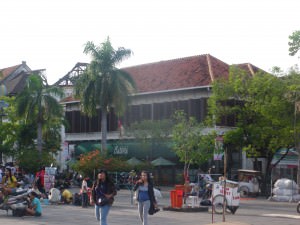 Cafe Batavia looks as posh as can be. It’s what I would class as a “white elephant” actually. It’s a massive two storey bar and restaurant yet it looked empty and we even questioned whether or not it was open. However, it was happy hour and I was with two of my great travel buddies, Martin from Ireland and Rodrigo from Brazil. If the Irish and the Brazilians can’t enjoy a happy hour drink, then who can? 😉 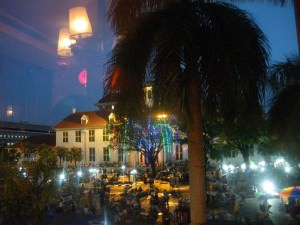 The view over the Old Town Square in Jakarta from the first floor of Cafe Batavia in Jakarta, INDONESIA.

Once inside we decided on a view overlooking the square. The sun was just setting on this mega metropolis and as a traveller I love a beer for sunset relaxing. Once we got upstairs however the place  was rather quiet and the view over the square was decent for a photo opportunity only. We decided quickly to sit at the Old Style Bar and get the Happy Hour beers in. Then I spotted the promotion! 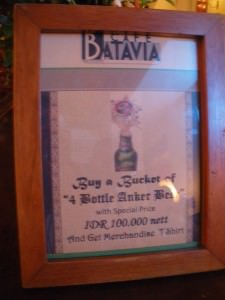 We had been used to drinking Bintangs in Indonesia, however the promotion was on Anker Beer, another local brew which we had yet to try. It was buy 4 get a free t-shirt. It looked like we’d be each having a few beers then! I’m a sucker for bargains and for happy hours. In the end it wasn’t much dearer than in the local bars on Jalan Jaksa where we drank the night before! It was 100,000 Indonesian Rupiah for 4beers so we were in like Flynn. 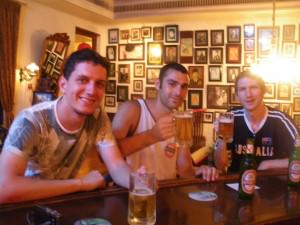 The three of us chatted away over a couple of hours. This is a very quiet bar it must be said and perhaps that is a good thing. The madness of the streets of Jakarta are left behind as you drink away inside. 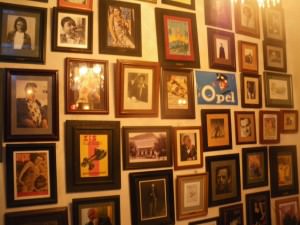 Cafe Batavia appears to be timewarped. You can relax here away from the madness of busy Jakarta outside.

Cafe Batavia is famous and elegant. It also appears to be time warped, perhaps to the 60s or 70s. The decor is of mostly photo frames, many of which are signed. Some of these photo frames are even from famous people who have had a drink in Cafe Batavia. 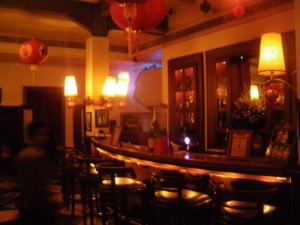 The funky decor bar that we sat at in Cafe Batavia Jakarta, INDONESIA

The decor is wooden, worn, timelocked and interesting. Indeed time stops here in Cafe Batavia, at least that’s how it felt. If time stopped, we had no time to – we got our free t-shirts said our farewells and headed off for a spot of Indianesian Food (yes, really) before a night out. 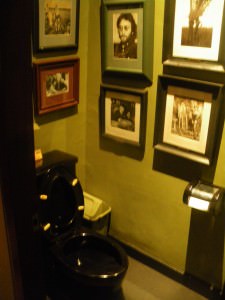 Even the toilets in Cafe Batavia are worth a look!!

Even the toilets were worth a look – photos everywhere – probably the best toilet I’ve ever pissed in!

I liked Cafe Batavia Jakarta and I was pleasantly surprised by the appeal of Jakarta. Recommended but don’t expect it to be busy!

When to go? – Happy Hour for sunset

Price – Not cheap by any means especially compared to some local bars in Indonesia, but worth a beer at least

When did it open? – 1993 (as a bar – the building itself has been around considerably longer of course!)

Relaxing with the lads in Cafe Batavia:

The toilets in Cafe Batavia (I should mention I don’t make a habit of filming toilets!!):

My thanks to Martin Gaynor and Rodrigo Coelho for joining me on this adventure!

Cafe Batavia Jakarta is one of my regular features called Thirsty Thursdays, brought to you by Don’t Stop Living – a lifestyle of travel.