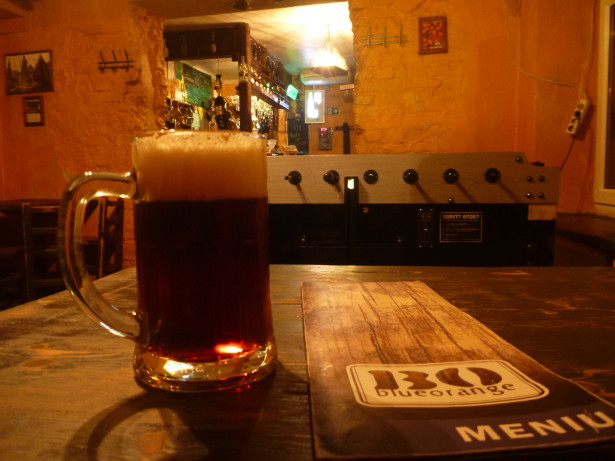 Do you know what? I’m simply going to bars now so that I can write about them. It used to be I’d go because I wanted a beer. Instead what I am doing in new cities and towns is I look up a minimum of 5 bars I want to visit during my few days in each place and then I have a beer in each one (normally just one beer, but who knows…). Lithuania was a real surprise for me. I had some nights out in Minsk and Moscow in days gone by and those cities were of a vodka drinking culture. I hated it. I used to detest drinking vodka. One shot of it and I would be sick instantly. I have changed a bit over the years of course and living in Poland now means I drink Vodka more often – it doesn’t mean I like it. Russians love Vodka though and they drink gallons of it. Thankfully their influence in Soviet times didn’t merge with the Lithuanians. Here in Lithuania there is a completely respectable and awesome beer drinking culture, Vodka is less prominent! Not binge drinking, not big partying but people chilling out having a few beers, which they enjoy because of the flavours. 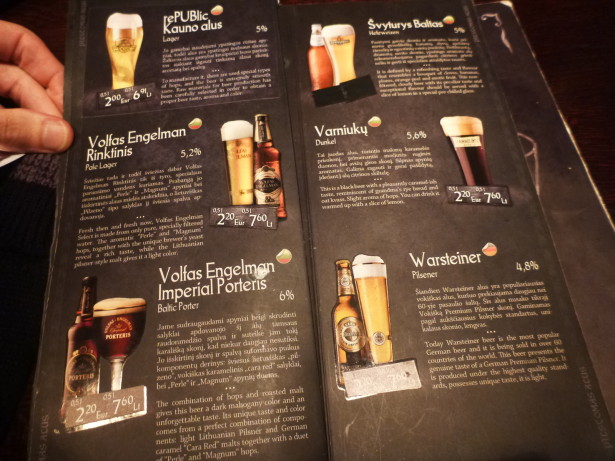 Kaunas is a brilliant city for a backpacker. I based myself in the cosy Monk’s Bunk Hostel right on Laisves Aleja, the second longest pedestrian avenue in Europe. From here I headed out to explore the city’s bars and beers. I met a lot of cool people and enjoyed the local beer. Here are my favourite 5 bars in Kaunas. 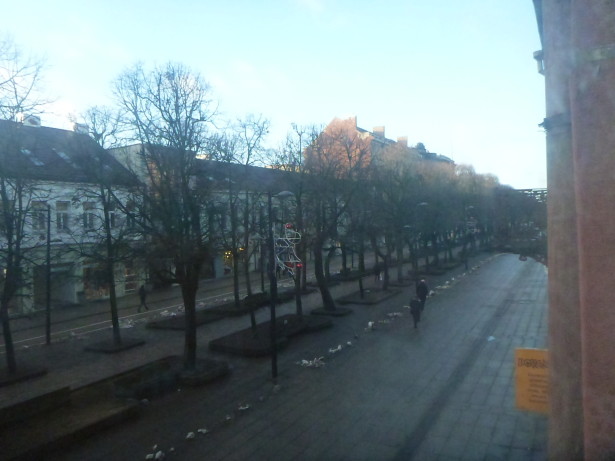 View from my room over Laisves Aleja in Kaunas.

1. RePUBlic
RePUBlic became my local for a couple of nights as it was about a two minute walk from the hostel. They have a great beer selection and football on TV. 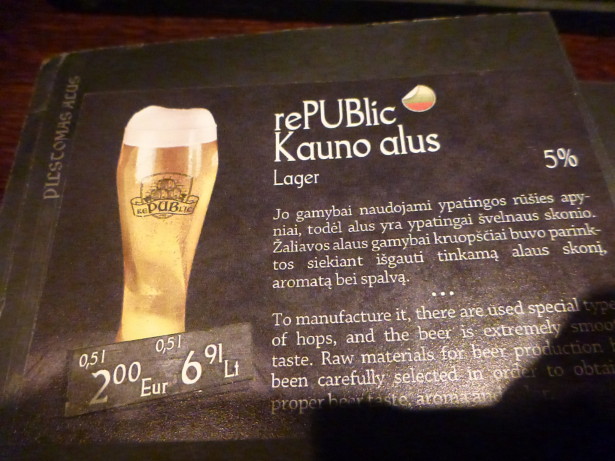 I tried Kauno Alus which is a lager (5% and 2 Euros) and also Volfas Engelman Imperial Porteris which is a Baltic Porter (6% and 2.20 Euros). Both beers are Lithuanian. 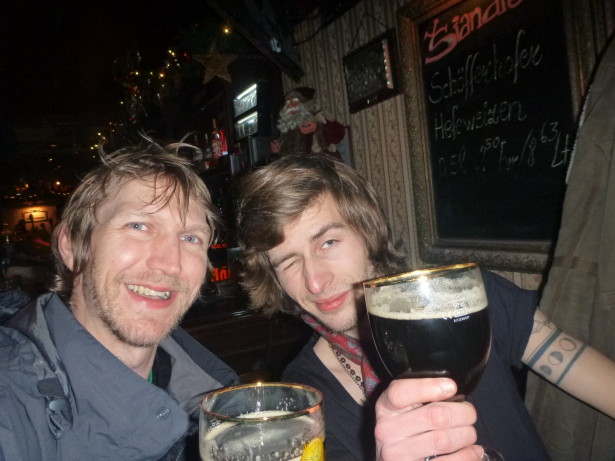 Enjoying beers with the locals in RePUBlic.

There are actually three RePUBlic bars in Kaunas so it’s a bit of a local chain. The one I went to was on Laisves Aleja.

2. Cerca del Castillo
I had a very lonely and enjoyable walk by Kaunas Castle and after that I felt I wanted a beer before heading out to the Pazailis Monastery. I met the owner Nijole and enjoyed chatting to her, it’s a quirky bar with a mix of local and Basque/Spanish food and beers. 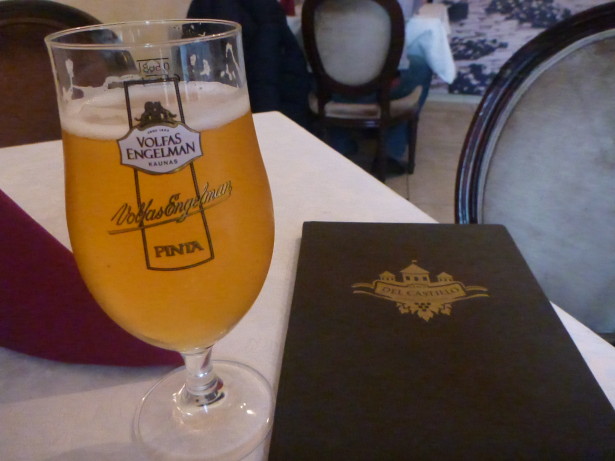 In here I had a Volfas Engelman which is a local lager which was 7 Litas/2.05 Euros. 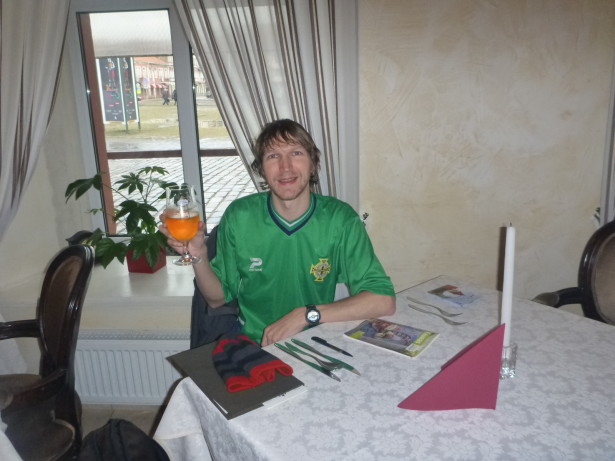 3. Blue Orange
This is the famous one in town, supposedly taking its name from the poem The World is Blue as an Orange. I headed in and decided to have pizza and a pint. I was lucky to catch it on a Happy Hour/special offer where 2 beers cost 2.6 Euros. I drank Kauno Gyvas dark beer. The pizza was only 2 Euros and was “beer flavour”. 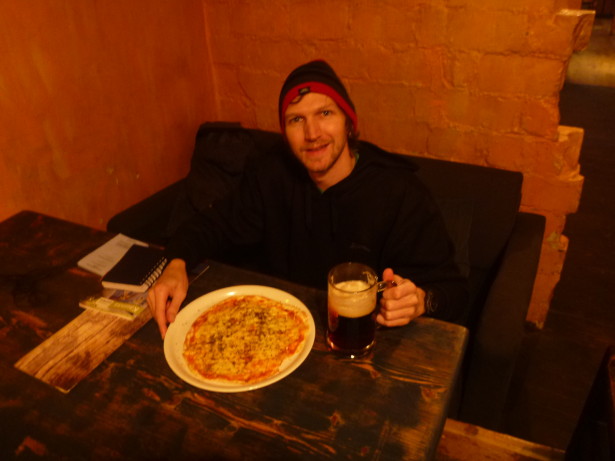 Beer and pizza in Blue Orange.

A great funky bar with atmosphere and I enjoyed talking to Odeta and Silvija who work there. 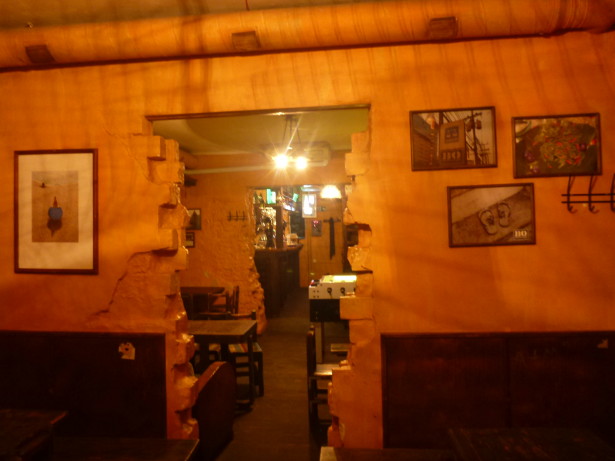 4. Avilys
Avilys is a class underground microbrewery pub which I loved. The two bar tenders and waiters were Dalias and Andrius. They have a few quirky things here – the world’s smallest ever beer glass is here (and approved by the Guinness book of records), they have the brewing equipment on view for photos and the highlight is the honey flavoured beer. It’s bliss. 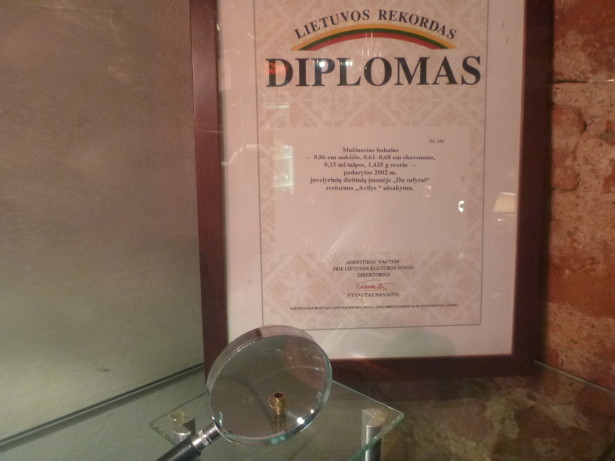 Smallest beer glass in the world in Avilys.

They brew two types of beer here and this is the only pub in the city to brew its own beer. I tried the Medilo and Medaus. 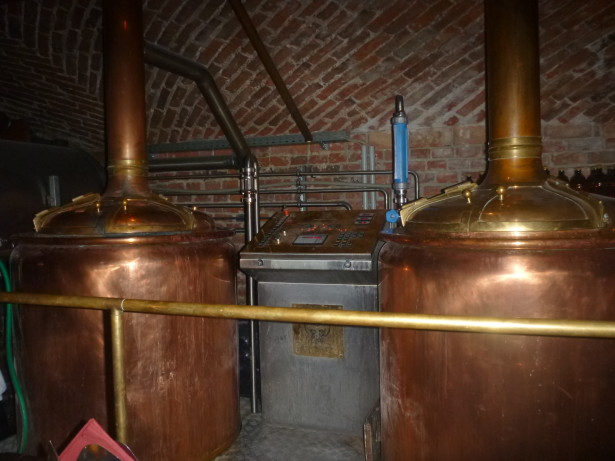 As it’s the best beer in town, pints are 2.90 Euros, so it’s also the most expensive. But believe me the honey beer is worth it. A great pub. 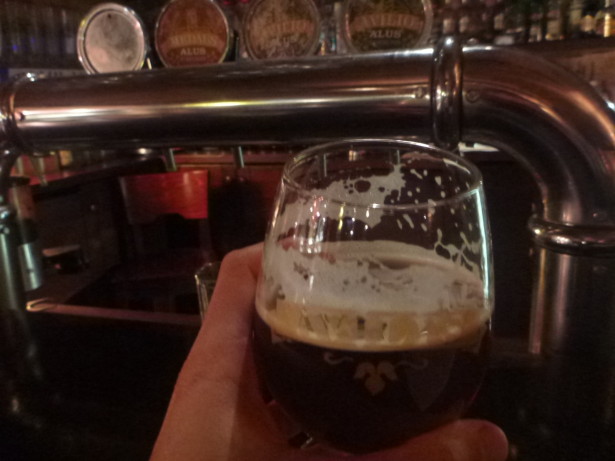 5. Gyvas
Gyvas is a very small bar with heaps of atmosphere. I sat right at the bar and chatted to Indre about Lithuania and the beer. They offered more than 20 types of Lithuanian beer all from microbreweries around the country. 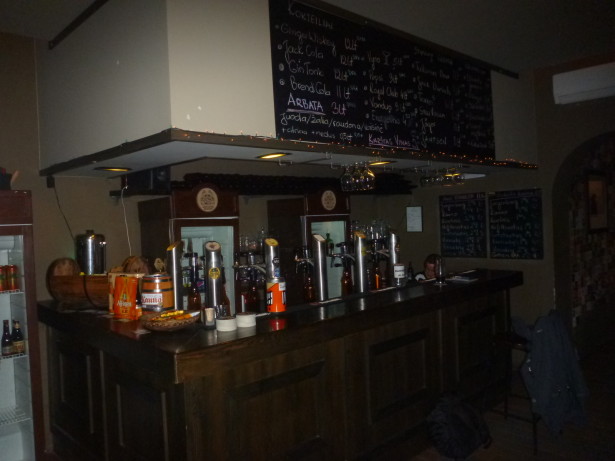 I opted for a Vasaknu Dvaro but Indre let me try sample sips of the others. When I was there a few local lads came in and asked for takeaway bottles as some of these beers can only be bought here. Beers here are cheaper than the rest – I paid 1.70 Euros for a pint. 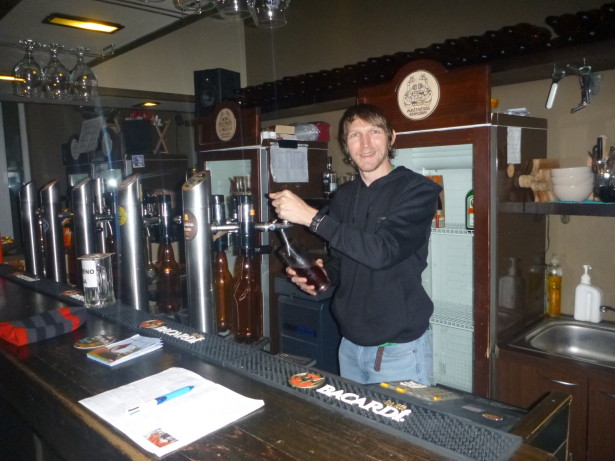 Behind the taps at Gyvas pub.

Bonus Point Pub – if you fancy having a beer in a monastery, then here in Kaunas you can! The incredible Pazaislis Monastery Complex is a bit of a mission to get to, you’ll need to get a trolleybus number 5, 9 or 12 and get off at the last stop, then it’s a 15 minute walk, mostly downhill. You veer off to the left to find the monastery. Inside is the Monte Pacis bar and restaurant. It’s a bit higher end and not really for the budget backpacker but how many places in the world is there a bar inside a monastery? Can’t be many. 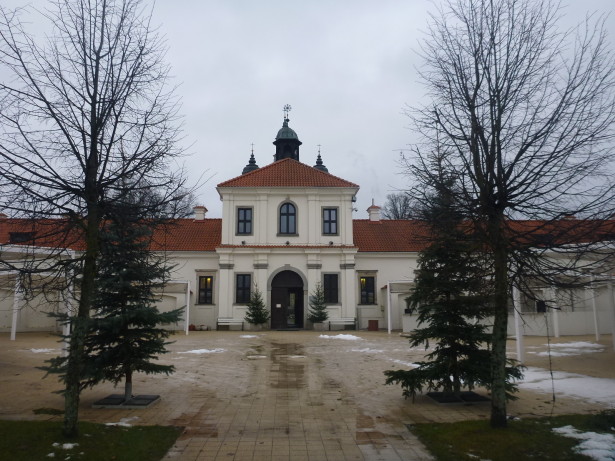 Monte Pacis has a bar inside the monastery complex.

Here are my videos from the best bars in Kaunas, Lithuania: