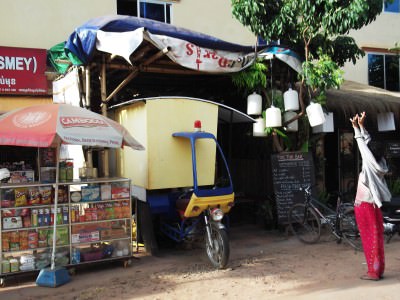 A lot of backpackers will have been to Siem Reap in Cambodia for sure – it’s even on a popular “backpacker’s trail” due to its proximity to Angkor Wat, but it’s nice to go against the flow in Siem Reap and head away from the main bar strip, known as Pub Street. I may have written about a wild and fun night in the Angkor What? Bar before, but the off the beaten path “Tuk tuk bar” was another highlight. It’s a tuk tuk that acts as a bar. All the drinks are served from the tuk tuk – there’s a sit down area in the bar area itself. 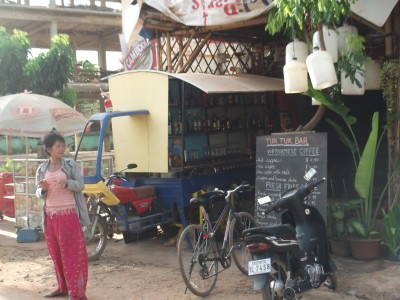 You can find it off one of the side streets near the Lady Bug Guesthouse where I stayed. It’s about a 10 minute walk from Pub Street. The tuk tuk is a very familiar and frequently used method of transport in places like Thailand, Cambodia, Ethiopia, Sri Lanka and so on, so to have a bar in one is a great quirky addition to Siem Reap’s already bustling night scene. 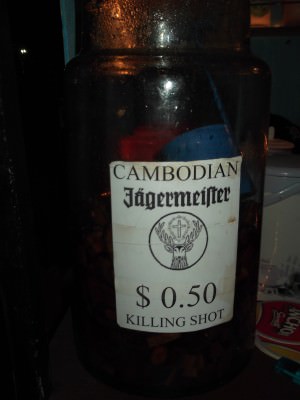 I like Siem Reap, and that might surprise a few of you as I am often a travel cynic to such places given it’s “too backpackery” but hell I passed through the city in just 4 days too (I took the three day Angkor Temples option) and loved the nightlife after a day of temples, it’s what you need. 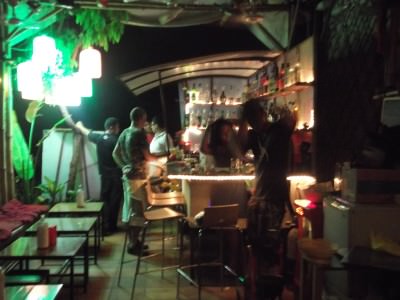 Inside the Tuk Tuk Bar in Siem Reap

We met an English girl in one of the bars on Pub Street and I was travelling with Helen and Anthony – a really nice couple from Cork in Ireland. We got on so well and Antony and I became drinking buddies for a week or so! It was like a return to my lifestyle in my early days in Australia. The English girl we met had just come from the tuk tuk bar and so we headed over to it. A few surprises were in store.

Where is the Tuk Tuk Bar in Siem Reap, Cambodia?

When did the Tuk Tuk Bar in Siem Reap, Cambodia open?

I was there in its opening year believe it or not, as it only opened last year – February 2012. As it’s new this is also great as it’s a decent new up and coming venue away from Pub Street. 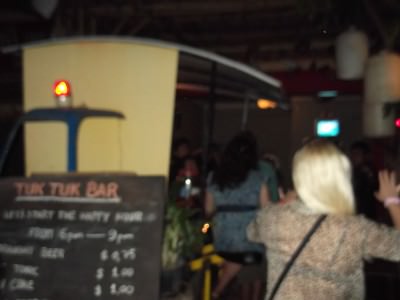 Thirsty Thursdays – a bar in a Tuk Tuk!

When is the Tuk Tuk Bar open?

It’s open 24 hours, however just make sure you ask the bar owner and staff when you’re there just in case. As these things always change, and may be affected by staff and holidays etc. Anthony were always in really late and it shows no signs of closing! 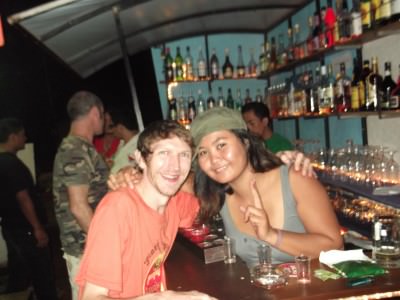 Me and one of the bar girls in the Tuk Tuk Bar in Siem Reap.

Drinking in the Tuk Tuk Bar in Siem Reap, Cambodia

The Tuk Tuk bar becomes lively at night and offers a range of drinks including cocktails and a few of their own specialities…One of the special shots was a lethal 50 cent shot of Cambodian Jagermeister. This has wood in it to add to the flavour so we were on those. It was known as a killing shot. Cocktails and shots were plentiful and this is a bar to party in. Places like Magaluf and Ayia Napa back in the day would have loved an alternative chill out, listen to music and drink too much type of bar like this. 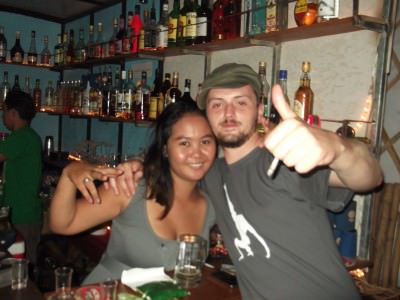 My mate Anthony and the bar girl in the Tuk Tuk Bar, Siem Reap, Cambodia

So if you end up in Siem Reap, drop by for a drink. It’s cheap – you’re in Cambodia!

Here’s a few videos of me in the Tuk Tuk Bar in Siem Reap, Cambodia: