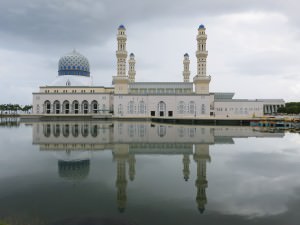 Top 5 Things to Do in Kota Kinabalu! The City Mosque is worth a trip!

Kota Kinabalu is a city housed on an island of jungles! It’s part of Malaysia and sits in the province of Sabah, on the island of Borneo. While most people head there for the jungle trips, it’s also nice to spend a few days in the city of Kota Kinabalu itself. I loved the relaxation of this city and have compiled a top 5 things to do in Kota Kinabalu… 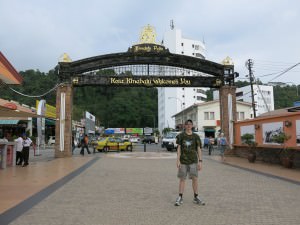 Arrival at the welcome sign to Kota Kinabalu – great city for a bit of sightseeing while the monkeys roam the jungles in behind!

If you’ve ever read my stuff on Taiwan, you will know that I LOVE night food markets. I’m all about the culture that goes with them. Sitting outside relaxing without a care in the world – just a great part of the travel lifestyle! Here at the seafront in Kota Kinabalu is a fantastic night market. Freshly cooked barbecued meat and a great range of food, added to cold drinks. Soft drinks, coconut juice and tea are all available and best of all it’s cheap! Chicken wings and coconut juice was my preference. It even made my recent Friday’s Featured Food. There are a few other night markets in the city too – have a wander round at night and you’ll be surprised. This is Malaysia too – so cheap food is always readily available! 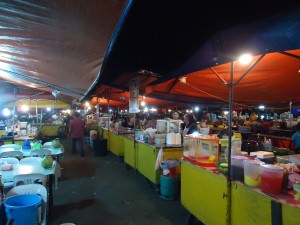 Top 5 things to do in Kota Kinabalu – night markets are excellent!

Again if you’re after bargain souvenirs, clothes or just general shopping, Kota Kinabalu caters for all types. An endless array of night markets line the streets (mostly around the seafront area). Kota Kinabalu boasts at least 5 large shopping malls. Our favourites were the Central Market and Centre Point, but there is also a posh shopping centre called Suria Sabah. 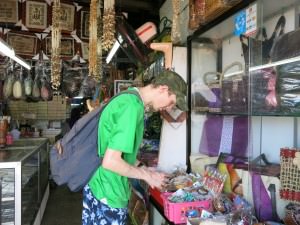 Top 5 things to do in Kota Kinabalu – scouring the cheap local markets for cheap souvenirs!

The sun beats down on this busy city, but a few kilometres out to sea lie a load of small tranquil islands. We visited two of them, one of which was Sapi Island – will cover it in detail on separate posts as well. On the islands you can laze on the beaches, go snorkelling or deep sea diving plus a range of watersports are available. You have two main options for getting out to the islands – 1. Book the boat yourself at Jesselton Point ferry terminal (cheaper) 2. Go as part of a tour (will cost more money, but ultimately will include island hopping, snorkelling, lunch and hostel pick up) 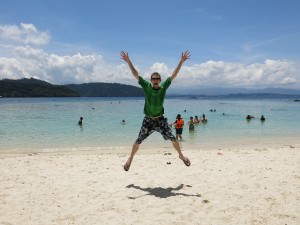 Top 5 things to do in Kota Kinabalu – Jumping for joy on the paradise island of Sapi.

While the island of Borneo is predominantly Muslim religion wise, Kota Kinabalu doesn’t disappoint for the avid drinker. There are a load of options and even a specially created “Beach Street”. Drinking in the local restaurants is very cheap but if you want to meet fellow drinkers, travellers and party go-fers you’ll need to pay a bit more and head to the expensive bars. 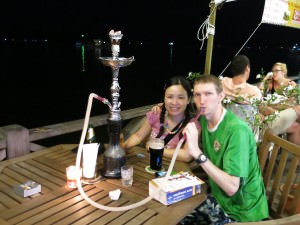 Top 5 things to do in Kota Kinabalu – smoking some shisha down by the seafront in one of many bars!

Along the seafront, the Irish Pub Shamrock is a good spot for live music, good beer and sports. Bartzar, also on the seafront has lots of flavours of Shisha (priced at 25 Ringitts each) which is a great way to smoke and relax the night away as if you are in the Middle East! There is no strict time embargo for drinking in Kota Kinabalu, but generally if you head to bars around 9 or 10 pm they will be more lively and busy. Happy Hour is also the perfect time to go for a cheap drink 😉 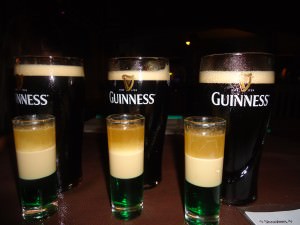 You can get Guinness and Republic of Ireland flag shots in the Shamrock Irish Bar, though it’s more pricey than the local Malay bars!

To contrast the price difference however – it’s staggering. In a local Malaysian bar I paid 5 Ringitts for a Tiger Beer. While a pint of Guinness in the Shamrock Irish Pub cost me 26 Ringitts! If you’re a budget backpacker you’ll work out where to head!

Whether you understand the Muslim religion or not, you must accept the fact that Borneo is littered with Mosques and is the religion of the island. Kota Kinabalu has a spectacular Mosque which is really worth checking out! 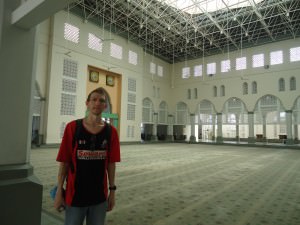 Top 5 things to do in Kota Kinabalu – that’s me inside the City Mosque/ Masjid Bandaraya.

You will need to get a bus out of the city to it (for a very cheap 1 Ringitt!), as it’s on the main road towards the airport but it’s really worth checking out – and don’t forget to cover up – no shorts, bikinis etc.!! The Mosque sits in front of a basin of water and you can marvel at the reflections. 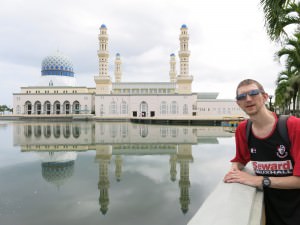 Checking out the City Mosque in Kota Kinabalu, Malaysia.

This Mosque is called the City Mosque or in local language Masjid Bandaraya. By the way in the actual city itself there is also the State Mosque just so you don’t get confused – you might as well visit both in fact. 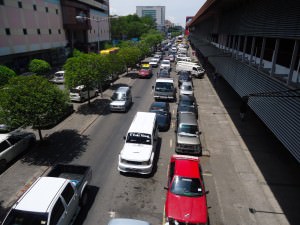 Busy traffic in Kota Kinabalu – it is a city don’t forget!

Here are a few of my videos showing some of the top 5 things to do in Kota Kinabalu:

The City Mosque in Kota Kinabalu:

4 thoughts on “Top 5 Things To Do in Kota Kinabalu, Malaysia, Borneo”