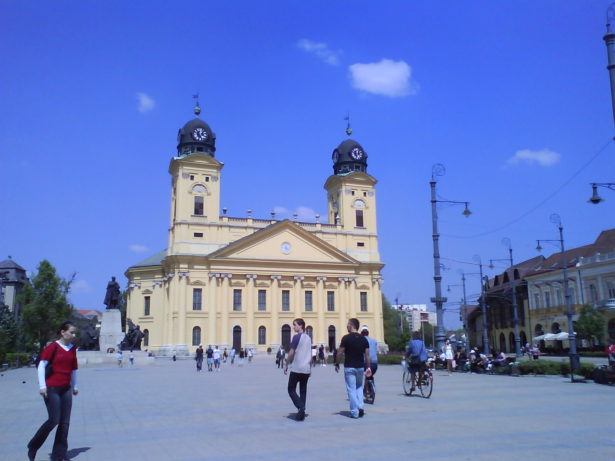 What to do in Debrecen, Hungary – the striking Nagytemplom is a good start!

Debrecen is Hungary’s second biggest city but you wouldn’t quite know it – it’s hardly colossal, nor is it instantly mind blowing. It’s shy and peaceful and Hungarian to the core. However, I liked it. Why life ever took me to Debrecen I’ll never know. Most tourists that visit Hungary do Budapest and Balaton and give a by ball to charming Debrecen. But there I was.

A travelling Northern Irishman in this city just 100 miles short of the Romania border. My reason for going there will appear in the final paragraph…first up, What to do in Debrecen! 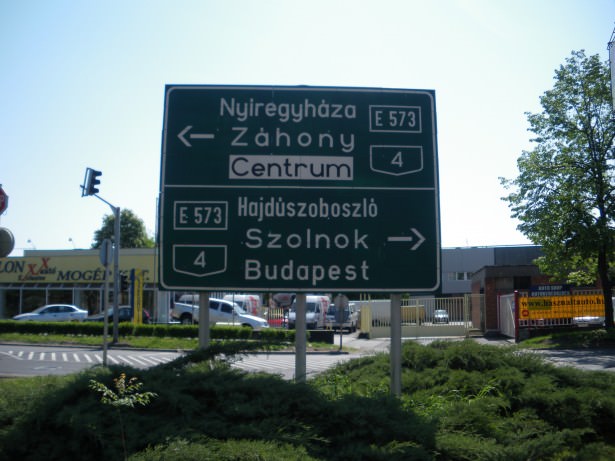 A road sign in Hungary’s shy Debrecen. Sometimes you have no idea why you end up in such places.

Top 5 Things to do in Debrecen?

So in a city that you’ve never heard of, you want a bit of advice from someone who has been there. But I’m not going to be obvious here at all but I’ll give you MY personal top 5 things to do in Debrecen. There may have been other things that I missed out, but here’s my take anyway, a “top 5 of what to do in Debrecen”. 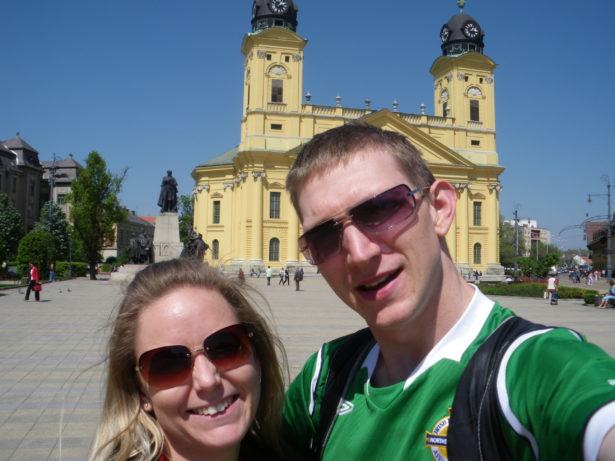 This sparkling yellow church known as the Nagytemplom is the most striking sight in the city. It is the city’s centre piece and focal point. It’s unmissable to be honest and it sits in front of the main square where trams take you back in time 20 years. Debrecen hasn’t got caught up in the commercial world quite yet. Shopping Malls are on the increase, but it was pleasing that the church is the most popular sight. 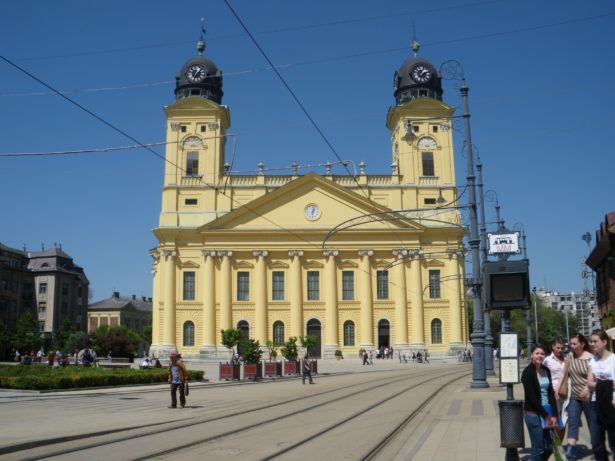 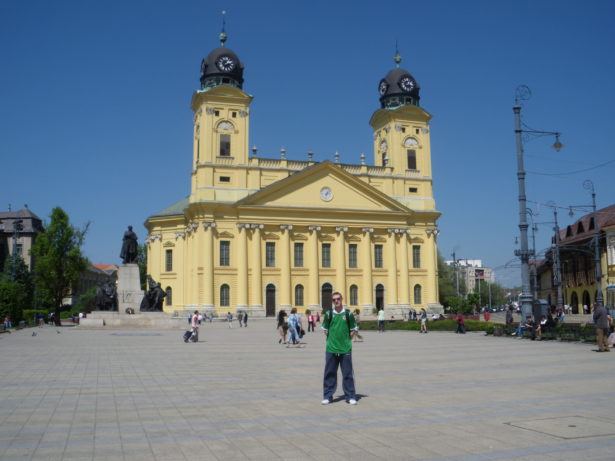 You can pay to go up to the top for a great view over the city and it’s sprawling suburbs. It’s worth it. Only one of the two towers was open to the public when I went, there’s a video of me at the top at the bottom of this post. The Nagytemplom is also referred to as “The Great Church” in English, and the locals also refer to a smaller church on the main street nearby as “The Little Church”. 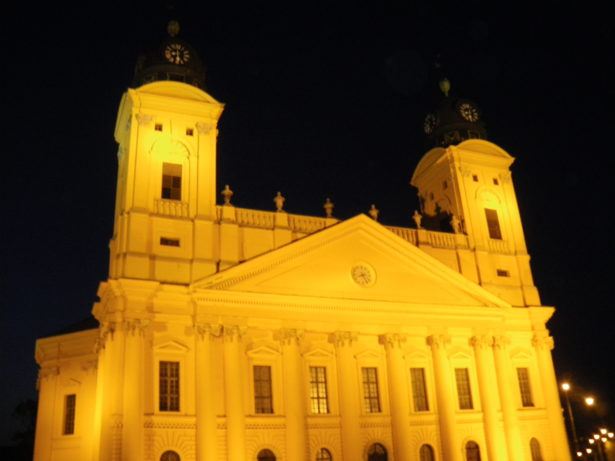 The Nagytemplom now even has its own website: Nagytemplom . It’s a Protestant/Reformatisch Church, check here for opening hours.

Hungary has a proud football history and indeed Hungary SHOULD have won the 1954 World Cup. They beat West Germany 8-3 in the group stage then lost 3-2 to them in the final after being 2-0 up, in controversial circumstances. Get your fix of Hungarian football at the traditional Loki Stadium. Ferenc Puskas once played here but not for Debrecen (who are nicknamed Loki). 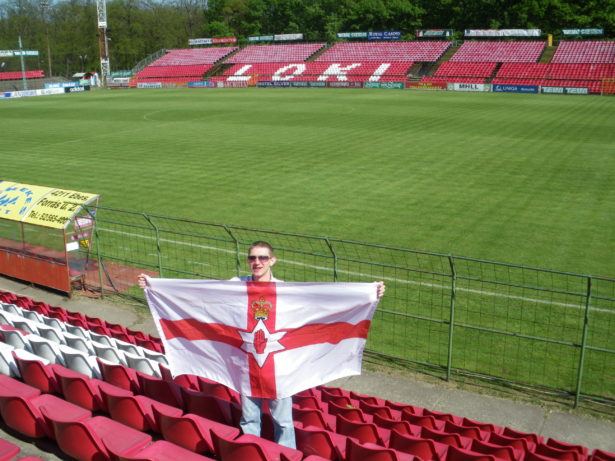 The fans shout “Hajra Loki!!” and the club have been Hungarian Champions a mammoth SIX times in the last ten years, having NEVER won the league before 2004. They have also won the cup and made it to the group stages of the Champions League and Europa League in recent times. Debrecen’s proximity to the Romanian border mean they attract Romanian players including World Cup star Tibor Selymes. They play in red and white and you can also buy souvenirs at the stadium on match day, or in the Debrecen Plaza shopping mall in the city centre. Official Loki Website:

3. Have a beer overlooking the Square

Hungarians like to drink beer. In summer months, the square and the main streets in Debrecen are alive with outdoor beer bars. I didn’t visit any actual pubs on my visit, but one of note (and recommended by my ex-girlfriend) is the Bakelit Music Cafe. 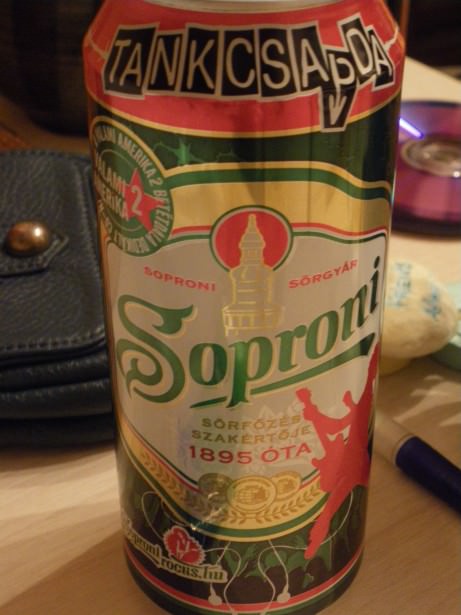 Have a cold beer – perhaps a Soproni relaxing by the main square. Believe it or not, I didn’t…

I gave up alcohol for six months in 2009 (a story will follow at some point) and my trip to Hungary was during that period. I did buy a Soproni however, and drank it later on, just after returning to the booze. Hungarian beer is top notch. That Bar:

4. Go to the Theatre 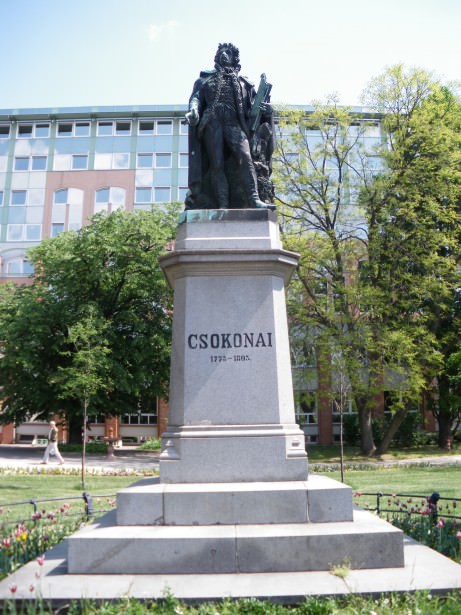 Head to the theatre – famous Hungarian poet, Csokonai was from here – what to do in Debrecen.

Eastern Europe had a golden age of theatre, and in some sense it still does, and the locals are proud of these theatres. Hungarians love drama and dance and the Csokonai Theatre is well recommended. It’s yet another striking yellow building! It can be easily reached on foot from the Nagytemplom, even if you’re just going there to take a photo, I’d say it’s worth it.

Just in front (and to the left) of the Nagytemplom is also a statue of Csokonai, the famous Hungarian poet who grew up here, the theatre is named after him and has regular events on:

5. Get a tram out to the University

Debrecen boasts a decent university and this also goes hand in hand with a good student population and night life. The University itself, is “just a university” but it’s free to walk around and nearby there is a superb park which makes for a good walk, with stalls and restaurants all selling decent Hungarian snacks and drinks. As I said, get a tram out to it – the tram network in Debrecen is good. In fact, you’ll enjoy it. 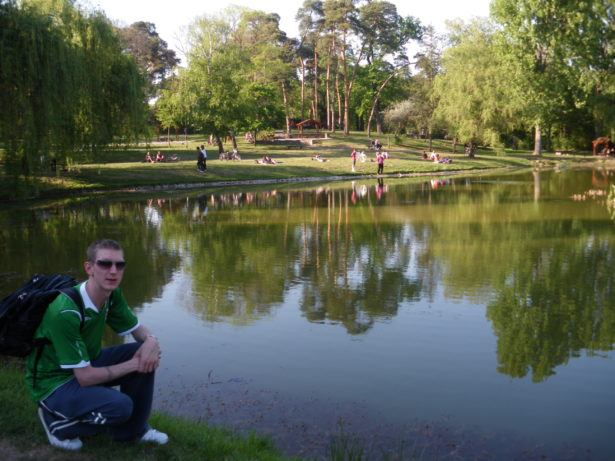 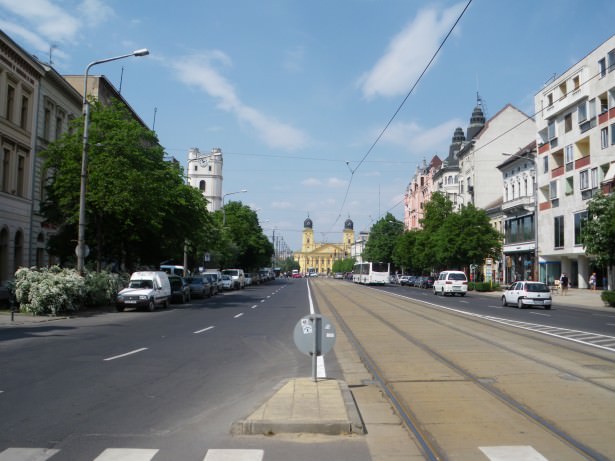 The striking Nagytemplom is Debrecen’s centre piece. Here it is at the end of the main street.

One More for a Bonus Point/Also Ran: 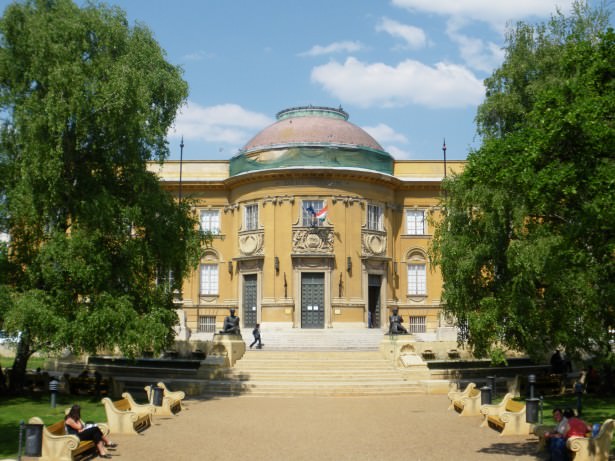 What to do in Debrecen, Hungary – the Deri Museum is a possibility.

There is a Museum in Debrecen, but it’s not that great in all honesty, however if you fancy seeing it, then why not? It’s the Deri Museum and yes, I went there. Official Website:

Deri Museum – this site seems to be intermittent!

How do you get to Debrecen in Hungary? 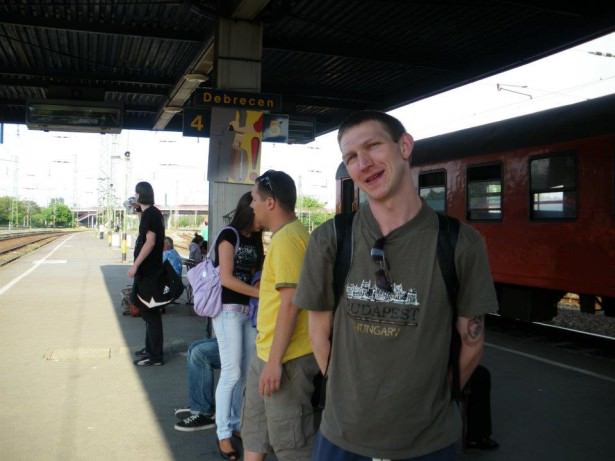 How to get to Debrecen in Hungary? I arrived by train and loved the journey!

Most travellers arrive by bus or train, from either Budapest or from across the Romanian border. I arrived by train from Nyugati Station in Budapest – the train journeys in Hungary are quite excellent. I loved them. But before getting my train I flew into Budapest (where I spent a few days) on this particular trip, using a low cost carrier.

Where to stay in Debrecen 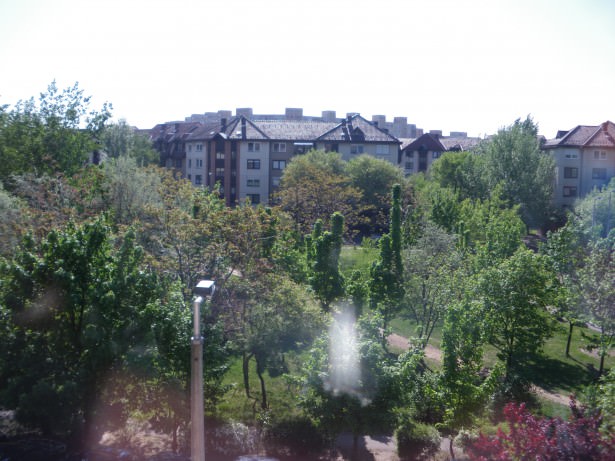 This was my bedroom view of Debrecen, but I stayed with my girlfriend Noemi’s family.

Now I was there with a “lady of the past” (story) so I stayed with her family in a wonderful tower block on the edge of the city. For prosperity purposes I’ve included it above, though her family flat is not where you should stay. Try the Hostelbookers website for up to date options:

– Debrecen is close the Romanian border and was in fact once occupied by the Romanian Army! Post World War 1.

– Debrecen was once the capital city of Hungary (yes, I know, I didn’t believe it either)

What to eat in Debrecen

I’ll keep it short and simple here – try Hungarian Paprika Chicken. You’ll love it. And for a snack buy some Turo Rudis! (a chocolate bar with cheese in it – loved them). I was also shocked to see (even in 2009) a McDonald’s restaurant in the city centre.

Why did I go to Debrecen?
So I went there with Noemi Linzenbold, a girl who was born and bred in Debrecen and it was years ago, that trip was a fantastic one but it wasn’t to be, I cried a bit and times have changed. Debrecen probably hasn’t – you should check it out. This is one hell of a journey my friends… 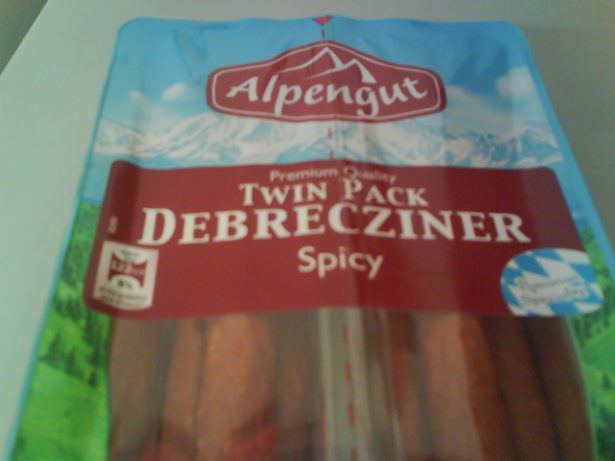 My Videos from backpacking in Debrecen:

Outside the Nagytemplom in Debrecen, Hungary:

Debrecen main street by the Nagytemplom:

The View from the top of the great church/Nagytemplom:

On the Budapest to Debrecen train in Hungary:

7 thoughts on “Backpacking in Hungary: Top 5 Sights in Debrecen”