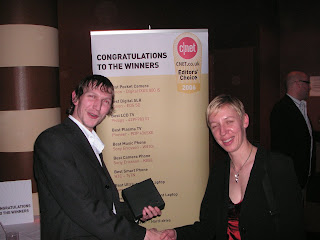 While working in Public relations for Bite Communications, I often got invites to events, awards do-s etc., and as busy as life is, I didn’t attend all the ones I had offers from! However in December 2006, I did go along to the CNET Awards in Soho. CNET is a technology website, which does all the latest gadgets etc. At the time I was doing PR for three technology brands – Apple, Sonos and Iomega and it was nice to attend, given that Apple were nominated in at least three awards. I ‘represented’ Apple, while Heidi and Jon (also from Bite Communications) ‘represented’ Samsung. I say ‘represented’ as since we are the ones that do all the media outreach and know the journalists, it is us who get the invites. This was basically a pre-Christmas awards do, with free booze and buffet. Anyone turning this sort of thing down is stupid. Plus I get to meet all the CNET people and extend my network, or at least put a face and a personality to a voice on the phone or the tone in an e-mail. 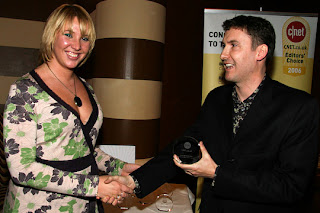 We finished work at Bite at 6 pm ish (for once on time!) and got the District Line, then Picadilly Line tube to Picadilly, where the event was to be hosted. I dressed in a shirt and jacket, smart casual if you like and inside we were greeted by Michael Parsons and Mary Lojkine of CNET.co.uk. We got beer and buffet on arrival. I took full advantage, necking a few bottled beers before the awards began, where I knew Apple would win in at least one category. I got to shake Mary’s hand whilst receiving an award for the best MP3 player (the iPod) by Apple which was great! Heidi and Jon also picked up awards. Then we mingled with all the others. I met Chris Stevens, Andrew Lim, Guy Cocker and Rory Reid. All were great craic. It was also the FIRST ever CNET Editors Choice awards to be held and I was proudly there in Picadilly. It was held downstairs in the quite posh Astor Bar and Grill. The Awards were in the room on the right and afterwards we went into the nightclub next door to party. I thank everyone at CNET for such a great night, and one I will remember. You don’t think much of these things at the time, but cherish them – they’re great memories to have! My friend Heidi even made it onto the photos on the CNET website, I kept mine to myself, as I was advised to by my superiors, Jonathan Hopkins and Andrea Christopherson at Bite, due to the protective nature of the Apple brand! So there’s the photo for you now…two years on! 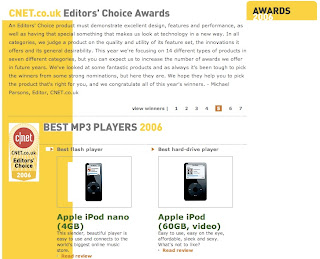