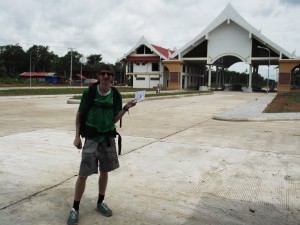 World Borders: How to get from Laos to Cambodia on the Nong Nok Khieng to Trapeang Kreal route.

In my latest edition of my world borders series I look at how to get from Laos to Cambodia. There are obviously a few routes you can take to go between these two countries. I was staying in Don Det down near the Cambodia border so I did the Nong Nok Khieng to Trapeang Kreal crossing. This is also a money saving tip by the way as you want to cross your borders and get your visas in the cheapest way possible. For this basis of this post and all my world borders, I’m talking about using a British or Irish passport as those are the two I travel on. I happen to know that Russians and Luxembourg passports don’t need visas for Laos and that other nationalities will pay different amounts for their Cambodian Visa. 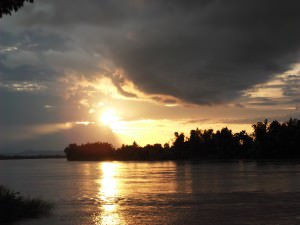 If you’re staying in Si Phan Don (4,000 islands), ALL the tour operators there will have daily and regular buses to Cambodia. There will be a few options for this so check them out yourself when you’re in the 4,000 Islands. 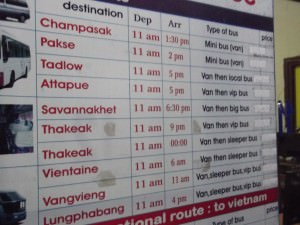 There are lots of buses available to book in Don Det and Don Khong. Shop around and book your bus!

Booking Your Boat and Bus from Laos to Cambodia

I stayed in Don Det (Si Phan Don, 4,000 Islands, Southern Laos), and wanted to head straight to Phnom Penh in Cambodia next. In the end it was simply one boat and one long bus ride and that was it. The cost to get from the island of Don Det in Laos to Phnom Penh was $25 US Dollars (July 2012) – this included a small boat from Don Det to Ban Nakasang, then a bus to the border which waits for you before taking you onwards to Kratie and Phnom Penh. If you shop around or bargain them down you could possibly get it for $22 US Dollars, but $25 – $32 was the average when I checked. 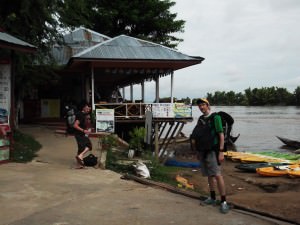 Leaving Don Det – Jonnee’s Restaurant was where I had a beer watching the sun go down the previous night.

What do you need to get from Laos to Cambodia?

– A passport photo (carry two just in case, I always carry them)

– All the forms filled in 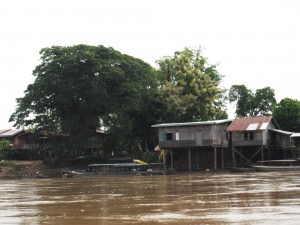 Leaving behind the 4,000 Islands in Laos.

How to sort out the Visa for Cambodia?

OK please listen to me here and DO IT YOURSELF. Don’t pay $30 or more to a bus driver or the company to do it for you. Yes they will get you across the border no problem and with the valid visa, but you’re paying them money that you can save. Remember Cambodia and Laos are cheap and you can get a hostel, a beer and a meal any evening for $5 dollars, so keep the money for yourself. Tell them you are doing it yourself. 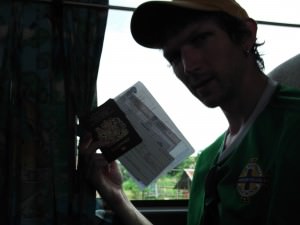 How to get from Laos to Cambodia: DO IT YOURSELF – on the bus with my visa forms and passport.

Filling in the Visa Forms at Ban Nakasang, Laos

This village is where the boat from Don Det drops you off at. 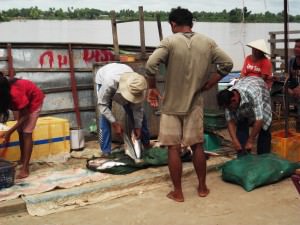 Morning Fishermen in the tiny village of Ban Nakasang, where you will fill in your visa and immigration forms.

We waited for our bus there and while you do that you have about half an hour so that’s when you should fill out the visa forms. The guys on the bus give you everything you need to fill in. All you’ll need yourself is your passport and your two photos. Hold on to your $27 US at this point. 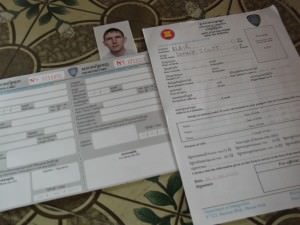 You will get all your Laos and Cambodia visa forms at Ban Nakasang – fill them in while you wait for the bus.

If you really succumb to letting these guys do things for you then yes you can pay them between $30 – $35 to sort it out. I just wouldn’t recommend it. Why be a lazy traveller and why give these guys extra money? Plus to me it just ruins the whole buzz and excitement of crossing into a new country! 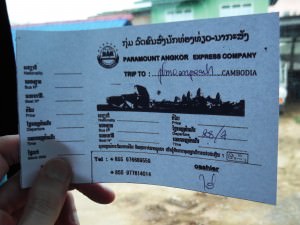 My bus ticket from Laos to Cambodia – from Ban Nakasang to Phnom Penh.

After you have filled in your visa forms you will board the bus at Ban Nakasang and are heading straight to the border point known as Nong Nok Khieng. It’s less than 15 minutes drive. If you have paid the guys for your visa (which I don’t recommend) then you can walk straight across the border with them and hang around and wait for your Cambodian visa to be put in your passport. 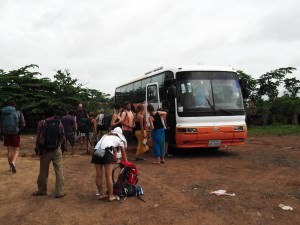 Boarding the border bus in Ban Nakasang – eventually this was headed for Phnom Penh.

However I was doing things myself and got off the bus at a very obvious border crossing here at Nong Nok Khieng and proceeded to the departure point to get my passport stamped. In fact everyone got off the bus at the same place just by the border, myself and 2 others were doing things ourselves so we headed to the immigration while the others headed straight for Cambodia. It was a Sunday, which is also important.

Do you have to pay to leave Laos at Nong Nok Khieng?

Officially no – there is no charge and if you are Lao or Cambodian there is no way they will ever charge you. If you are foreign, you can be charged up to $5 US Dollars. Myself and a couple from Argentina crossed the border together and we spent almost an hour arguing with the Lao officials that we would not pay any money to leave. 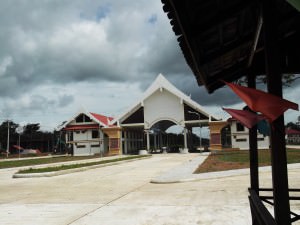 They told us we were free to walk across without the departure stamp but that we would be charged in Cambodia. We had to bite the bullet and in the end paid them $2 US Dollars each. Just to leave Laos. A horrible end to a time in a country I don’t have a lot of positives for. 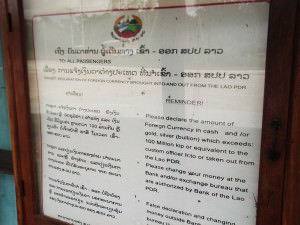 A sign at the Laos border point at Nong Nok Khieng – they shouldn’t be charging you here but they do.

So there shouldn’t be a charge. However if it is a Saturday or Sunday they will try to charge you an “overtime fee” and that was what happened to us. So if you want a tip – don’t cross the border at the weekend. You’ll save $2 US Dollars. 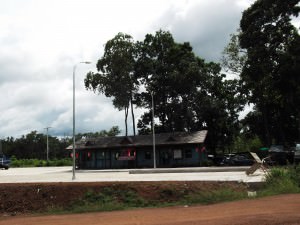 The border immigration huts at Nong Nok Khieng, Laos with the corrupt officials.

Paying this $2 US dollars was a sore point for me. I hated it. It is corrupt and illegal – they shouldn’t be doing it, but we spent an hour arguing and got nowhere. I even offered to buy the guy a beer just to stamp my passport and let me leave (a beer costs 40 cents maximum there) but no chance. So the three of us paid it and off we went to Cambodia. 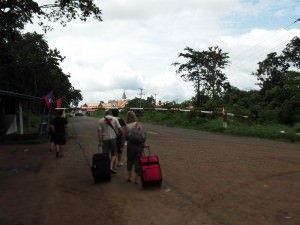 Crossing into Cambodia from Laos at Nong Nok Khieng.

Crossing the border itself from Laos to Cambodia

You simply walk along the road across a bridge past the obvious border between the two countries, a flag on either side plus barriers mark the border. It was so quiet and not busy at all. The bus I had booked to Phnom Penh was waiting on the other side of the border for me, and once in Cambodia head to the immigration hut on your right hand side. Here are my visa stamps and visas: 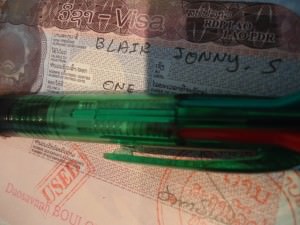 My Laos visa. I crossed into Laos at Thanaleng. 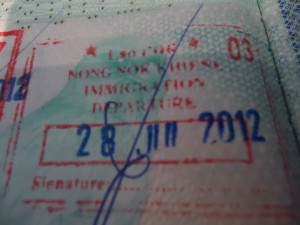 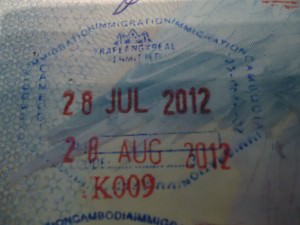 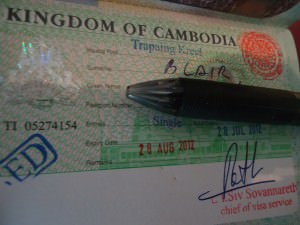 My Visa for Cambodia issued on the spot at Trapaing Kreal.

Pay them $25, fill in the forms, give them a passport photo and you’re in! Don’t let them charge you any “animal fee” or “immigration fee” as there isn’t any. $25 for your Cambodian Visa and that’s it. British and Irish citizens get an instant 30 day stay. 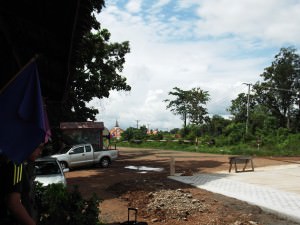 The border between Laos and Cambodia from Nong Nok Khieng to Trapeang Kreal.

You are now in a place known as Trapaing Kreal, Cambodia

Just so you are aware this place, Trapaing Kreal (also sometimes spelt Trapeang Kreal!) is not really a village at all – it’s just the border crossing but ultimately you board your bus there and head onwards, south through Cambodia. 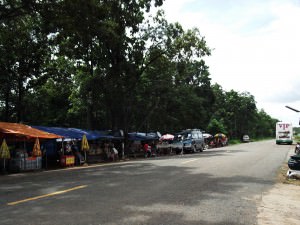 Arrival in Cambodia! Market stalls by the road in Trapaing Kreal.

I don’t know if this is unusual but our bus waited for about two hours there at the border so we were sitting around for two hours. I quite enjoyed this as my Irish travel buddies (who got the bus with me but sorted their visas through the bus driver) were waiting for me there! So with two Irish guys and an Irish girl sitting on the border having just entered Cambodia (I was on country number 68), it was time for a beer!! 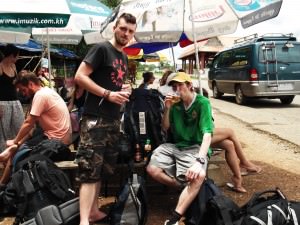 The Irish Lads! Having a beer with Anthony on a 2 hour wait for our bus at Trapaing Kreal, Cambodia.

The sun was beating down and it was hot. I had paid $27 US Dollars to leave Laos and enter Cambodia and we then learned that a beer here was only 50 cents. Still on a slight budget, Anthony (from Cork) and I had a beer each and sat in the shade. I read my lonely planet book and we chatted about all things in life and relaxed. Within two hours we were safely on the bus to Phnom Penh. The bus took a further 12 hours that day to get us to the city of Phnom Penh just before midnight, but it was a great trip. If you want to break up the journey and get off the beaten track a bit – there are buses to Stung Treng, Kratie and Kompong Cham as well. I was happily heading straight to Phnom Penh though! 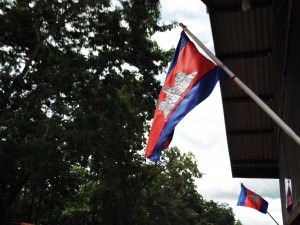 Welcome to the Kingdom of Cambodia!

Total price I paid to get from Laos to Cambodia

If you need any more tips or information, let me know. Safe travels and happy border crossings!

Here are my videos which piece together parts of the journey on how to get from Laos to Cambodia:

At the Laos exit point Nong Nok Khieng, arguing with the guys for trying to charge us:

Slating the “Laos Wankers” as I cross from Laos into Cambodia:

Arrival into Cambodia at Trapaing Kreal:

Having a beer at Trapaing Kreal in Cambodia!:

9 thoughts on “World Borders: How to Get From Laos to Cambodia (Nong Nok Khieng to Trapaing Kreal)”