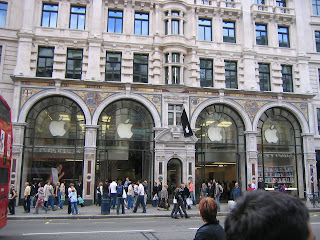 I was lucky enough to work for Bite Communications during 2006 – 2007 and my main client was Apple, so naturally I was invited to loads of excellent, exciting events. Looking back, it all happened in a flash, and it kind of passed me by. Apple as a client was always very demanding, even though the amount of hours we spent on them was above and beyond what we were paid for! So after a month or so in the job, I was making phonecalls for Apple’s “Christmas in August” event. This might sound crazy and way too early, but its not…journalists and PR practitioners work many months in advance and most of our product placing and media outreach for Christmas would be done as early as August, especially for monthly and quarterly publications, who aren’t just quite as instant as online, television or radio media. 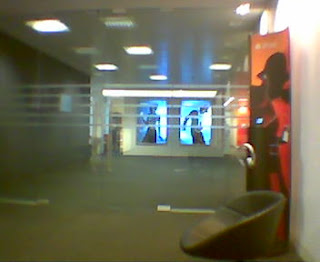 We did have targets to reach, something like 30 journalists would be expected to attend a behind closed doors private event held by Apple (computer giant) in order to promote our (their) many products in the run up to Christmas. At that particular point in time, it was iMacs, iPods and MacBooks. The iPhone and more up to date iPods hadn’t been released, and the iPod shuffle was much larger than it is now. The event was to be held in a nice room at the Hannover Street offices in London, round the corner from the Apple Store on Regent Street. The idea would be to have one room full of Apple products, turned on, ready for use as well as many and various other companies products which could be used with Apple products. This included companies such as Belkin and Nike.

The preparation for the event began a few weeks before the actual “Christmas in August”, which was scheduled for Wednesday 23rd August 2006. The preparation meant knowing which products would be on display on the day, the decor of the room, the journalists to invite, and just the overall set up on the day. When I started working on the Apple account, my contact there was a lady called Jennifer Delaney (which by coincidence, and just to confuse me was also the name of a London based technology journalist) who was in a similar position to me, a “placement student”, a title which I hasten to add I didn’t enjoy or promote. I saw myself as just the same as everyone else at Bite, even if I was on a lower grade of pay. By the time the “Christmas in August” event came round, Jennifer had been replaced by another “placement student” called Michelle Husain.

It was said that I should know Michelle Husain, as she was also a Public Relations student at Bournemouth University. The name didn’t ring any bells however, and even over the phone I couldn’t work out who she was. We had studied in different years (me in 2003, Michelle in 2004) at the university and as I was part time and working two jobs, I didn’t really know or connect with many people on the actual course. When I met Michelle however I recognised her to see, but had never previously spoken to her. She’s really not the sort of lady, character, personality or looks wise that I feel comfortable talking to or being friendly with. However in the business world we all have to, and so we worked together in the run up to the event.

The Apple team at Bite consisted of Robin Wilson (an Associate Director), Karen Hardinge (a Director), Andrea Christopherson & Jonathan Hopkins (Managers), Rich Rust and Sally Plant (Senior Accounts Executives), and me I was an Accounts Assistant. Some of my tasks for the event were strange in the extreme! One of them involved sourcing and buying some “Christmas tree style” lanterns/lights, which were white. I found many white Christmas trees online, but in August it wasn’t the right month for delivery and the specific ones that Jonathan Hopkins and Apple had requested were hard to find, in the end we got them – I can’t really describe what they were – just white luminous twirly twisty Christmas style “trees” to give the room that Apple feel. I also had to source some crocodile clips on silver stands to hold cards up, this again took forever to find, I even searched through Oxford Street and Carnaby Street on one of my days of looking for these specific clips. Even Paperchase and Liberty didn’t stock them, but we finally found them and everything was ordered and arriving in time for the event.

Then there was the big thing – the most important thing – inviting and securing the attendance of journalists! As PR practitioners, it was Sally Plant, Rich Rust and I who had to phone round MANY and EVERY technology journalist from national and regional TV, radio, magazine, online and newspaper. This ranged from Apple based magazines such as iCreate and Macworld to The Daily Telegraph to BBC to Shiny Shiny online. There was a massive target list drawn up by the experts at Bite and Apple, I’d say around 250 names were on it. I remember feeling a bit under pressure at the time, as there was a need to secure 30 journalists to attend the event, and Tanya Ridd, the main boss at PR within Apple was very demanding of these sorts of targets, on an ongoing basis! It took me a few weeks, spending about 2 hours of my office time a day, making the calls, sending follow up invites, forwarding emails, leaving messages etc. for a huge range of journalists. The time consuming element of this is hard to believe, as we first had to look up the publication on “Gorkana” and then get the phone number for the journalist, then hope they answered and then follow it up with an email to confirm the time and dates. Everything had to be right. Each day I would have to let my team know who I had secured to attend, it was normally Andrea Christopherson who would ask and demand of me, and she was a very very nice manager to have. Looking back she was very hard working, and always kept me right, even though I had often made mistakes (through lack of experience in PR, I’d say…). I grew very fond of the Apple team during my time at Bite, and still see it as a cherished time of my life. Not many people can say they have done the UK PR for Apple…

The day of the event arrived, and I was smartened up (well nice shirt, trousers, aftershave and polished shoes), as I left the office with Karen Hardinge to catch the district line tube, where we changed once before the Oxford Circus stop. I often felt nervous around Karen, as I had a lot to prove and I had printed out some copies of who I had said would attend, and I wondered to myself “what if most of these people don’t turn up?” “Will I get the blame?” Of course it wouldn’t be my fault if they didn’t, but one month into a new job I didn’t fancy taking the blame for poor attendance at an event for Apple. Once off the tube, we met the Apple team and the other Biters that were there. On the Apple team were Tanya Ridd, Alan Hely, Helen Lord, Georgina Derrick and Michelle Husain. Jonathan Hopkins, my manager from Bite had brought a camera with him for the photos which cannot for copyright and legal reasons be shared on here, however those I took myself I have included. When I arrived everything had been set up, with everything looking in pristine, clean condition and a great set up in the room upstairs in Hannover Street. I waited at the front as the meet, greet and tick PR guy! This just meant saying a hello, welcome to the journalists and writing the attendees on the list, before sometimes introducing them to Tanya Ridd, who was enthusiastic to know which journalists were there. But what if nobody turned up?

We needn’t have worried however as between 1 and 4 pm (the three hour afternoon slot that I believe we said the event would run on) journalists began to flock out of the second floor lift, to sign in, be greeted by me and go into the room to chill out with all the cool Apple products they could write about that Christmas! I was really enjoying my role at the event actually, in a rather royal blue shirt and black trousers I still thought I looked well as I ticked off the names, had a few plays on the iPods and Macs, enjoyed cups of tea and coffee (with complimentary snacks) and chatted to random journalists. I made a list of all those who attended, and in most cases the publication/ media company they work for. I took a few photos myself on my mobile phone as well just to have and as the day went on, Tanya Ridd kept asking me how many journalists had now attended. The final number was 55, almost double what we’d expected so a good job had been done, some PR outreach had been attained, some new relationships were merged and both Bite and Apple were satisfied. I also really enjoyed chatting to journalists that day – including Richard Murdoch who knew Colin Murray (NI radio presenter who I met in 2005) and Edith Bowman, and I was very surprised to turn round and spot the lovely Natalie Johnson walking into the room. Natalie was by this stage a journalist for iCreate the Apple magazine, and had previously known me for 2 years or so doing radio, and Nerve events (The Lock In+ Locked Out) at Bournemouth University. It was great fun! When the day of work ended, I hung around to help tidy up, moving computers, iPods and accesories back into boxes and tidying up, before I dispersed into the August night via a central line tube to my then flat at Shepherd’s Bush. I often quote this Bruce Springsteen line, and days like this make it appropriate again, “they’ll pass you by; glory days.”

(apologies to those I’ve mis-spelt or left out)