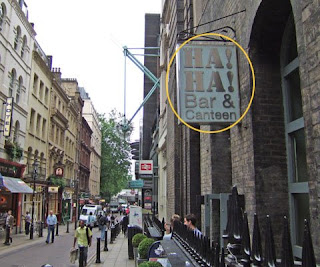 Whilst working in PR in London at Bite Communications, days seemed too long, nights too short and my journey home would be different every day. On any given weeknight, the trains could be delayed, cancelled or lines off and this would affect my routes home and to work. I would never complain about it though – it made things very diverse, and often led to meeting many and various different people. My normal route if there was one, would be to come out of work at Bite Communications and get a district line train direct to Embankment, before walking up the side entrance to London Charing Cross for one of three different trains back home to Dartford, Kent. I would get which ever one was leaving next, and then choose to get out at Slade Green, Crayford or Barnehurst as all were close to my house in Wyatt Road. On this one particular Tuesday night (3rd October 2006), all three lines were delayed for over an hour and I had this time to kill. I nonchalantly popped into the conveniently located “Ha Ha Bar!” at Charing Cross for a pint. Expecting to have just one or two and then get my train home. However when I got in there they had the old Sky Sports News on, with all the football updates, which was great. There were no obvious seats, so I spotted a young lady sipping on a red wine and asked her if the seat opposite was free. It was and I sat down, thinking the young lady was with a mate, or more likely a boyfriend, as she looked extremely pretty in the busy bar full of people suited up and finished work. We got talking and it turned out she was a Swedish lady who had spent some time living in Scotland and was now in the big city looking for a job. Her accent hinted at Swedish, Scottish and American at differing intervals, and she recognised me as Northern Irish having met some of my fellow countrymen during her time in Scotland. She Her name was Inga Louise and she spoke intelligently of doing a degree, some travelling and job hunting. We were getting on very well, and she was alone and had just come from a job interview. I always loved Ingrid Bergmann as a kid, the famous Swedish actress and this petite young Inga had some charm.

Getting wood from a Sweden girl

Time marched itself on, and I lost track of it, totally enchanted by this little Swede. At one point I thought there’s no way she would want anything from me, then we just got closer and closer over red wine and beer, and soon I was facing the reality that time was so late I had to make the last train from Charing Cross. She asked if she could come back with me, and of course I said yes, it would have been a pleasure. Before we had even left the bar that night I had placed my hand up her shirt asking to feel her Swedish nipple. I remember them as very very nice nipples, and very tiny, yet her breasts were a nice size. As we boarded the train we got pretty cosy, kissing snogging and fondly in some kind of dream like journey, if this was to be a one night stand, it sure was an interesting one. I unbuttoned her shirt on the train and remember a male business man looking over, aware that I had exposed a part of young Inga. We were both drunk, and I am sure she won’t blame me for anything that happened. It’s just one of those things that happen on a night. I was all into her, and I knew that the very next morning I would need to be in Bite Communications to do a “sell in” with Katy Cook for the CPP client we worked on. I would be ready for it, and perhaps now with a smile. 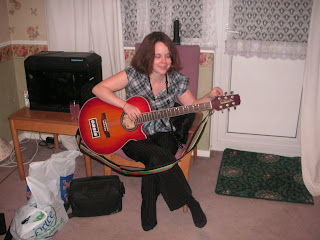 Inga Louise – my Swedish girl for a night

She classed my penis as my “peepie”, which I found hilarious, even in the Ha Ha Bar she put her hand close to it and wanted to know what size it was. It was all a bit surreal. It felt like a perfect two people meeting by chance in that pub, and only because my trains were delayed. We shared my single bed, tightly up against each other, she’s the only Swede I’ve ever seen nude and she looked great, I wish she’d of let me have a photo of her breasts, they were great! She also played me a tune on my guitar, and this is the only photo I kept of Inga Louise. As I got my train into work I sent her a text message and we arranged to go out for drinks a few weeks after. I took her to the posh club Cafe de Paris to watch The Belgrave Scandal, about a month later, and the passion and the memory was all but gone. Inga Louise provided me with a very random bit of pleasure and I often wonder where she is now. We didn’t talk about Abba or Ikea. And if the Beatles had changed one of their song titles, then I was definitely a man with “Swedish wood.” on an October morning in 2006. All the best to young Inga in her quest for happiness.