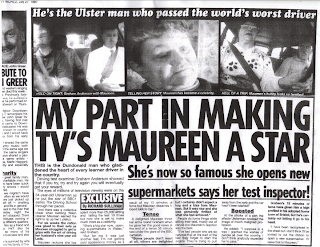 Back in 1997 I was learning to drive in and around Newtownards. I had turned 17 and would do my driving test in my birth town of Newtownards. My driving instructor was Desi Bateson, a friend of the family, and my driving lessons were paid for as a 17th birthday present from my Granda (Samuel Blair), who was himself a bus driver during the troubled times in Belfast. At the very same time I was learning to drive, there was a TV show on BBC 1 called ‘Driving School.’ In essence it was the FIRST reality TV show of the new generation (forgetting things like ‘Beadles About’ and ‘Watchdog’) as it filmed real drivers learning how to drive. I used to watch the programme every week, and a certain Welsh cleaner named Maureen Rees took ages and ages to finally pass her driving test and caught the imagination of the British public, even in a pre-Drumcree Bangor. Well fast forward 11 years and something from the day Maureen Rees passed stuck in my mind and came back to life in The Windsor Snooker Club of all places…

In there I was getting ready for the Northern Ireland v. Czech Republic match when Graham Anderson the vice chairman of the South of England Northern Ireland Supporters Club produced a shock. I had known Graham since I was 25, and had found him to be quite the type of character I’d like to be when I’m his age. He still had time for family, friends and lunatics away from work and social activities. He brought out two newspaper clippings in the bar, revealing his very own archives of reality TV stardom. This enthusiastic Ulsterman, Graham Anderson, was indeed the Driving Instructor who PASSED Maureen Rees that day after God knows how many efforts. Something twigged! 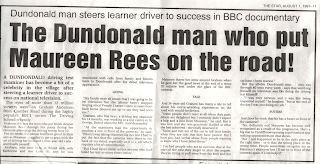 I had actually remember back in 1997 reading about how it was a guy from Northern Ireland who passed Maureen Rees, but it was only then (last week in September 2008) that I discovered it was actually one of my good mates, Graham Anderson. What a shock. What a man. And such is the beauty of life, that it was a hidden classic from the archives waiting to be retold. Re-telling the story will be hard, but understand that Maureen Rees was a really shit driver to start with. On Kangaroo petrol, the wrong way down one way streets and breaching red lights, Maureen Rees was a driving instructors nightmare. The show on TV planned to show that with a lot of time and effort, even someone like Maureen could eventually pass. The time she did, the man in the passenger seat was the current Vice Chairman of SOE NISC, Graham Anderson. 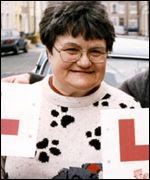 Its that old theory isn’t it “you think you know someone, but you don’t.” And its what makes life interesting you know, that in every person you meet there may be something you should never assume and something major they have done but never mention it. With me, I was the editor of a national football fanzine aged 16. Not many people would know or care about that, but it’s a fact that is condemned to the history books. Anyway you look at it, Graham Anderson, by just merely doing his day job, was actually the real star of the UK’s first reality TV show: Graham was the Dundonald man who put Maureen Rees on the road. I’ll dig out those video archives someday, or maybe even search YouTube for it, in the meantime there are some media articles on Graham Anderson and Maureen Rees, and a few links…I managed to pass my driving test in a snowy Newtownards about 3 months before I turned 18. But it was just another day on planet earth…

Welsh cleaner Maureen Rees became a household name in Britain after spending hundreds of pounds on lessons and failing the practical test several times. She failed to pass the test another two times during the series as well as the much easier written exam known in the UK as the theory test. Maureen’s memorable moments include moving into the overtaking lane of a dual carriageway in the path of an overtaking car, and accidentally running over husband Dave’s foot. She eventually passed in the last episode in an automatic, though after the series finished she passed a manual test. Maureen became quite a celebrity and even released a single: her cover of Madness’ “Driving in my Car” reached number 50 in the UK singles chart.

Teenager Danny wanted to pass his test so he could visit his girlfriend in Preston. Although he passed first time, he had already broken up with Jill. An older lady called Joan passed her test at the beginning of the series (even though it took her a while to realise that she needed to switch on the ignition before the car would move), but had “lost her nerve” and needed lessons to rebuild her confidence. The main instructors were Pamela Carr from Streetwise Driving School and independent Paul.

Northern Irish man Graham “jack of all trades” Anderson became a household name in Britain after passing Maureen Rees on her driving test on about the 7th attempt. As a driving instructor, Graham was simply doing his day job, only to find that the BBC cameras were very much on him in the classic episode of Driving School, broadcast by the BBC in 1997. Graham curently resides in Bristol with his wife and son, and is a dedicated member of Northern Ireland’s Green And White Army, having travelled all over Europe watching the unpredictable exploits of the Northern Ireland international football team. In 2006 Graham was elected as the Vice Chairman of the South of England Northern Ireland Supporters Club, and plays a big part in club activities including attending meetings, organising away trips and looking after younger members who consistently and constantly act the lig. Graham is a man of many stories and has done a lot of travelling. He is truly one of those people you are blessed to meet on life’s little corridor.