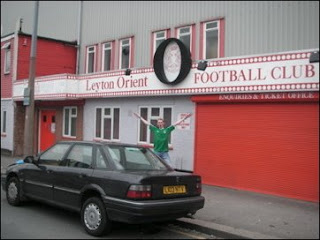 I always prefer pub crawls to sitting in the same pub for hours on end. Pub crawls provide more randomness, comedy, variety and you meet more people and sample more things. And you get to piss in more toilets. So for my 26th birthday, we stayed in some hotels close to oxford street London and planned a pub crawl. I decided to go with a few mates, whether they liked football or not and do a pint or at least a drink at every football stadium in London, that played in the league. We made rules, so Dagenham and Redbridge weren’t included, nor was Watford or Luton, whose airport is London Luton. It was basically 12 league clubs within the M25, which were: Arsenal, Barnet, Tottenham, West Ham, Leyton Orient, Millwall, QPR, Chelsea, Fulham, Crystal Palace, Charlton and Brentford. The deal was to do them all in a day! A few years ago Wimbledon and Plough Lane would have also been included. This was a Thirsty Thursdays with a real excitement to it! 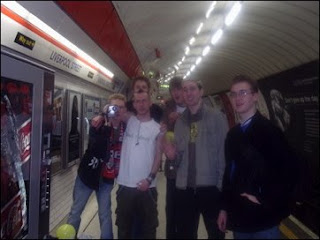 Before we started I drew up a plan of which order made most sense, we decided that Barnet which was in zone 6 was quite far out and so we would start there and work our way round clockwise almost. The day began for me and my mate Neil in West London at Northolt station. An all day travel card was essential and our first mode of transport was a bus and then the circle line tube. We had arranged to meet at 10.17 am at Barnet’s Underhill Stadium (which was basically opposite High Barnet Tube Station on the Northern Line zone 6). We banged into Hazel on the way at Finchley Central where we changed trains. Then Jody, Lock in Lee and Chris were all meeting us at Barnet. By 10.30 am we had reached our first obstacle however… 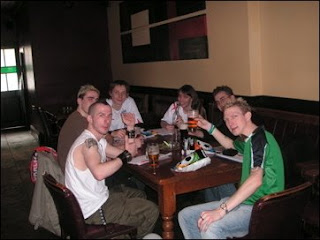 The pub at Barnet, which was called the Old Red Lion was closed for refurbishment and the pub nearest didn’t open until 12 noon, which would really have affected our progress, so we had another walk round but couldn’t find any other pubs near Underhill. We had already seen the stadium so we decided that we would pop to the shop and get a carryout of beer instead, so our first beer was from the offy and then we headed towards Arsenal. At the time Arsenal played at Highbury in fact it was their last season there, so we got some good photos by the gates and enjoyed a beer in The Arsenal Tavern on Blackstaff Road, then it was off to Tottenham, which actually meant a strangely long journey and two changes until we got off at White Hart Lane Station. We got photos by the turnstiles and then hopped into The Bricklayers Arms on the main Tottenham High Road. In there I was surprised to see a Northern Ireland scarf on the wall along with some Irish League scarves, as well as the owner who was from Omagh in Northern Ireland! Small world. His name was Kenny. 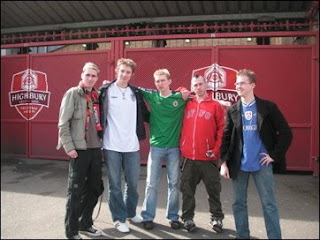 We were playing random card games all day and Neil got a card which read “get off at next station and do a pub” so we had to hop off on our way to Leyton Orient. James had met us at this point and we headed into The Railway Tavern by Liverpool Street Station for a quick pint, it was now 2.39 pm. James won the £75 jackpot on the fruit machine in there so he bought the next round! Then we were off to the Coach and Horses for a more relaxed pint by The Matchroom Stadium of Leyton Orient. 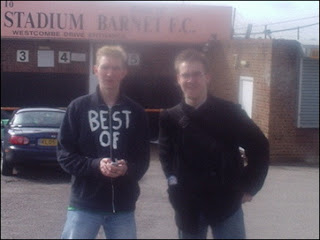 By 4.04 pm we arrived at Upton Park for West Ham’s Boleyn Ground. James and I popped over to the stadium for a quick look and a photo, while the others got the drinks in and then we enjoyed some quick alcopops in The Queens. It was obvious we were a bit behind, having done 5 stadiums in 5.5 hours and with 7 more to do before 11 pm, with the rush hour on tubes still to come. Anyhow at this point we had our first split. Lee, Chris and myself decided to hop off the tube on the East London line for Bermondsey at Surrey Quays as we thought it would be quicker to get to Millwall. The others stayed on the tube and then joined the Jubilee Line to London Bridge and were going to meet us at The New Den. However even Millwall Neil, the Millwall fan himself missed out, as me, Lee and Chris did a pint and a game of pool in Whelan’s Bar as well as getting the obligatory photo by Cold Blow Lane and Millwall FC. We then had to wait ages, and it felt like ages for two buses to London Bridge to meet the others who had just failed the task by missing Millwall. They had found a bar and a beer at the Bell and Barrow Boy however which was more important. At this point there was myself, Jody, Neil, Hazel, James, Chris and Lock In Lee. Then Lock In Lee, who had done the first six stadiums dropped out to get a bus to Oxford. Then there was six of us, with only Chris and me having done Millwall. Lock In Lee did half of it, plus the extra pubs at Liverpool Street and London Bridge, which were two random pints we did that had nothing to do with football stadiums… 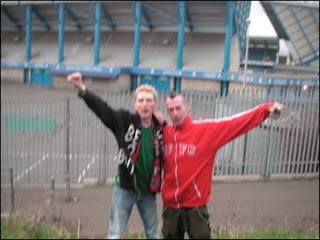 Then we hopped on the South Eastern train from London Bridge to do Charlton. That was quick and easy but sadly the Antigallican pub by Charlton AFC’s The Valley was closed. We had no time to waste, looking for another pub so we all had a tin of Carling each and decided to head towards Fulham and do it and QPR. Somehow we had decided we couldn’t finish all 12 grounds, but would do extra pubs in random venues to make up for it. Shepherd’s Bush at QPR would have been an easy last pint as bars open there a bit later, so we left it out and Got to The Firkin pub at Fulham’s Putney Bridge. WE wore silly hats in there and also watched some football!! Middlesboro lost 2-0 in the UEFA Cup Quarter Final (however they would end up winning the home match 4-1 from 1-0 down and go through!). By this point Crystal Palace and Brentford weren’t going to happen, we ended up just doing three bars at Chelsea instead, which kind of made more sense for getting home and still managing to do 14 bars in a day, when 12 was the target. The fact that 4 of them were not at a football ground didn’t seem to matter. 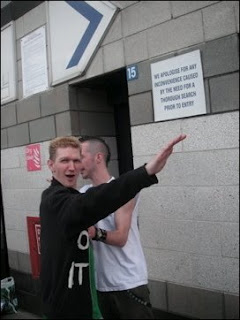 The rest of the evening is a bit of a blur after Fulham, as by that point James and Chris has also gone home and that left Neil, Jody, Hazel and me to finish the crawl. Me having been the only one to do every pub and 9/12 football stadiums. We ended up in The Shed Bar at Stamford Bridge with drinking competitions in there and then we popped into the Wetherspoons while waiting for our train at Fulham Broadway. At this point we got a train to Earl’s Court and danced away with dark rum and cokes in a nightclub in Earl’s Court. That was Bar 14 of a long day, which proves you can do all the football grounds of London in one day, without distractions, we just decided to have a few welcome distractions on the way. This pub crawl was Thursday 30th March 2006 and I still haven’t been to see Selhurst Park, home of Crystal Palace FC. 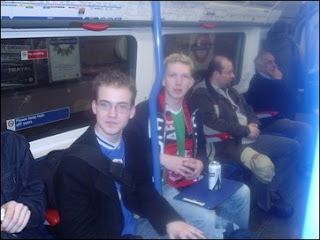