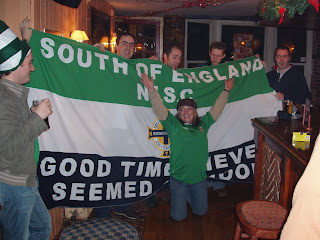 As detailed in other blog posts, during 2005 I helped set up and became chairman of the South of England Northern Ireland Supporters Club. The idea really was just to set up an amazing wee club in the south of England for Northern Ireland football fans, or anyone who enjoys a good day out really. After some negotiations with Tim Beattie (based in Basingstoke) and Owen Millar (based in Bristol, then Torquay), the three of us worked on setting a venue for the first meeting, but initially we didn’t start with a lot of publicity. Tim and I met up in Bournemouth in October 2005 to watch England v. Northern Ireland Schoolboys international, which we somehow got a pub in Bournemouth to show (Sharkeys pub in Bournemouth for the record, and Northern Ireland as they had done the previous month, won 1-0!). Young Sammy Nutt from Londonderry was also at that initial meeting which was unofficial but laid the ground work for what would become the launching of the club. I drew up membership forms, club ideas and basically wanted to do all the early PR. We wanted it to be new, different and fun, but we didn’t want it to be normal. It was OK…nothing would be normal…I was in the club… 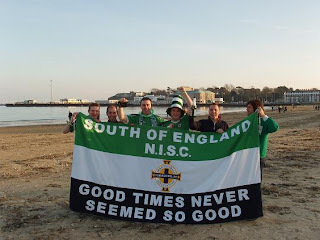 Randomly looking at one of my favourite websites (Beer in the evening.com) I came across a bar named Finn McCoul’s in Weymouth, Finn McCoul is of course Northern Ireland’s most famous giant. The pub was in Weymouth which at the time was around half way between Tim and Owen, and far enough away from Bournemouth for me to enjoy a good day out. The three of us (aided I must say by some encouragement by Toddy from the North of England NISC), then decided we should hold our first meeting in there and before Christmas, and without telling them. I got in touch with a journalist and writer I knew from travelling to a few Northern Ireland matches with, his name was Marshall Gillespie. Marshall was keen to join the club but couldn’t make the date we decided initially in Weymouth. The three of us then decided to go for it and I took the lead, first by collecting all contact details for anyone I thought would be interested in joining the club. I did this in a number of ways:

1. Northern Irish people I already knew based in the South of England
2. Northern Ireland fans I knew from home or away matches over the years that may or may not have recently been living in the South of England
3. Posting numerous posts on world popular Northern Ireland website Our Wee Country
4. Getting a club fleg made along with Tim and brining this to the Portugal home match in November 2005
5. Posting on Beer in the Evening website to see if any Finns regular just might be Northern Irish

That was it. We just wanted to get things off the ground, even if there were just 3 of us… 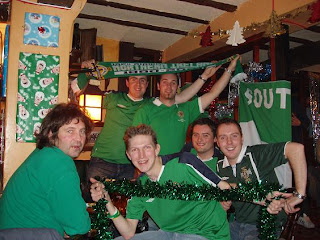 At the time I was a student and a shop assistant and one night an old school friend Simon McCully came in to the shop to do his shopping and came through my till. It was about two weeks before the meeting date we had decided for Weymouth. I told him about it and straight away he said yes, so now there were four. It was actually by total coincidence that I had met Simon in Tesco, if I hadn’t of seen him then he may still not even have been aware of the club. I had a few other contacts such as Clayton Brown and Bean who were based in Southampton as well as Aaron Adams and Sammy Nutt based in Bournemouth. Through the website on ‘Our Wee Country’ we also got Sammy Gordon, Alan Scott, Scott Gordon, Squid Armstrong and Richard Ingram all interested, even if in a non-committal way at first. There were no strings attached or even the need to be serious. It was all just a laugh. So the date was set of Saturday 10th December 2005, with the random time of 11.17 am chosen and the obvious pub of choice being Finn McCoul’s. Soon history would be made… 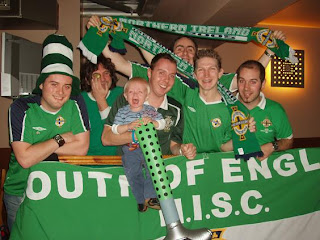 Getting to Weymouth that day was never an issue. I wasn’t prepared to drive, nor was anyone else as we expected to have a few beers, so it was a party train from Bournemouth. I picked up some green bits and pieces, tinsel for one and the deal was that everyone had to wear a Northern Ireland shirt for the day. Obvious but it would soon become more than just a piss up by the seaside. Owen drove to mine (and brought with him cheap champagne and a Stovepipe hat which he ordered on eBay from Texas in the USA), we met Simon at Bournemouth station and we then decided to hop on the same train that Richboy/Richard Ingram (who I had never met!) and Tim Beattie were already on. So that was five of us, but the invite was out there, others could always randomly turn up. We got on the party train which included my CD player fuelled with Geordie Best and NI songs as well as the club fleg which we had got “Good Time Never Seemed So Good” printed on as the slogan. Less than an hour later we were thirsty and in Weymouth searching for Finn McCouls… 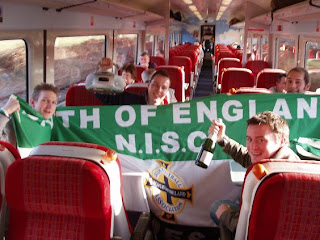 That would have been all and good, but a twist for us was then that Finn McCouls had been renamed the more boring ‘Finns’ and was a punk metal bar with black walls but looked like a smashing wee pub. We all dandered in, set up a kitty and then sat down to discuss the club. I don’t think any of us will remember too much about the setting up of the club, we just wanted to get pished and sing some Northern Ireland songs to Weymouth people really…I got the forms out and just as we were filling them in, in walked an older man with long hair, which turned out to be ‘Rabster’ from ‘Our Wee Country’ website or Alan Brown. All 6 of us signed up and would make the committee, with myself voted as Chairman, Owen Millar as Secretary and Tim Beattie as Treasurer. We wouldn’t have had it any other way really. Perhaps if I had been elected Treasurer on the day, things may never have been the same again. We fitted into the roles that the club needed if it was to be as nuts and Millar and I had wanted. Tim Beattie wont mind me saying that he is slightly more sensible than myself, and therefore having him as club treasurer was a great boost straight away. Simon McCully, Richard Ingram and Alan Brown would be committee members. Everyone filled in membership forms and three of us committed already to the second meeting in Torquay, by invite of Owen Millar who said we could stay at his and watch Torquay v. Birmingham City (2 NI players on display) in January 2006. The club was born and we must have had about 3 pints each in there before Simon and Tim wanted to move on to a pub which showed the Liverpool match. 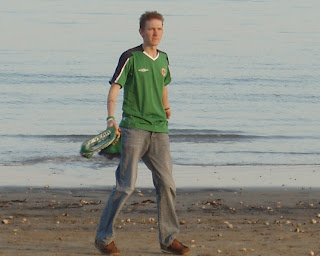 Weymouth being a coastal town and traditionally English it has all those summery shops which sell random stuff. In the Winter they don’t do a lot of trade. However we popped in and bought the only green inflatable hammer they had and a football, before going to the Old Rectory pub where the six of us sat down and watched Liverpool bate Middlesbrough 2-0. This was the first example of flirting for us as a club, as a delightful ‘MILF’ with a godly set of breasts ducked down just in front of us to pick up her kid, who we later donated the green hammer to, on the understanding that he could join in our photo as we sang “We are the South of England NISC…”

Then it was obvious we needed to go to the beach and officially launch the club with a bottle of champagne, which Owen Millar had brought for the occasion. We kicked football on the beach in the cold breeze and called over a random dog walker to take a photo of us holding up the club fleg and bursting open the champagne in front of locals who thought we were totally nuts. After another quick kickaround, we headed up one of the main streets in search of more beer and the football results.

I learned that Bournemouth had lost 2-1 to Hartlepool that day, and we managed to get rounds of 6 pints for less than £10. It was £1.60 a pint or something! The pub will never be forgotten and it is the Black Dog. Total bargain. We put the fleg up in there for the third bar in a row and sat down and started singing many songs to the almost all English crowd in there. Highlights of our set included “Away in a manger” just three months after Northern Ireland had beaten England 1-0. The locals then asked “What have Northern Ireland ever won?”. Chants of “66 and fuck all since” followed by “We are the champions, champions of Britain” plus full renditions of “We’re Not Brazil, We’re Northern Ireland”. Then Richboy and myself played the English chavs at pool and lost, I think, not that we cared, the beer was cheap and a blonde Scottish lady had now joined our party. She sat with us and borrowed Tim’s spare Northern Ireland top for the rest of the evening. I cannot to this day remember her name, or even why nobody took her number or email to invite her to the next meeting. There was also another two randoms – 1 other lady and a guy from Belfast. He had no interest in football at all, and was one of those from Belfast who would support the Republic of Ireland ahead of us, but he enjoyed our passion in the Black Dog. We then headed to another bar, which I put the fleg up even though I was drunk and kept falling over. 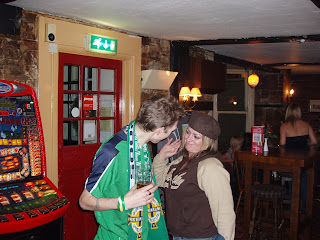 The South of England Northern Ireland Supporters Club was born that day in Weymouth! Not before we had returned to Finns for a death metal band and got on the train back to Bournemouth. I even made it into two more clubs in Bournemouth that night, while Simon and Owen made it into another one, while I went home after a totally mad day out. The memories of Weymouth 2005 will linger forever.

1 thought on “Is this the way to Weymouth, Dorset??”