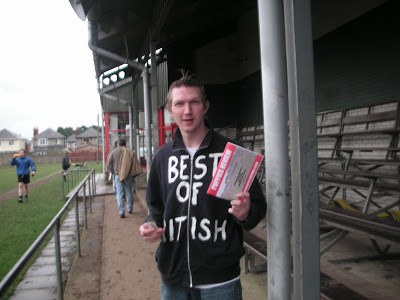 I had lived in Bournemouth for the best part of five years before I actually went to watch Bournemouth Football Club! That is probably because Bournemouth Football Club are not quite as high profile as their Boscombe rivals, AFC Bournemouth. They are two completely different teams, Bournemouth Football Club were formed in 1875 and are the oldest club. They play at Victoria Park in Winton, Bournemouth. They play in red. Their nickname is The Poppies. My club of choice is AFC Bournemouth. They were formed in Boscombe in 1899. They play at The Fitness First Stadium at Dean Court, Boscombe. They play in red and black. Their nickname is The Cherries. The two teams are leagues apart, with AFC Bournemouth division hopping between the second, third and fourth tiers of the English professional football leagues. Bournemouth FC play in the Sydenham’s Wessex League Premier Divison and are an amateur club. Either way I’m a cherries fan, but yesterday I decided to go and watch the Poppies! Literally my local club, as living in Ensbury Park, Victoria Park in Winton is only 5 minutes walk down Boundary Road. Yet I had often worked Saturdays or been at the Cherries matches, so until 2008 I had never been! I love football and the culture that often accompanies it. In any case an excuse for a great day out. 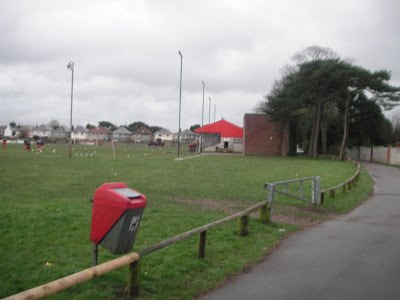 My mates Dan and Neil “popped their Poppies” a couple of months before me, enjoying the Poppies 3-1 win over Christchurch in a local derby. We just hung around waiting for another Poppies home match which wouldn’t affect our devotion to AFC Bournemouth. With the Cherries due to play Leeds at Elland Road on Saturday 8th March 2008, we hadn’t the resources or the time to make the trip sadly, so looking at the fixtures it was either Poole Town or Bournemouth FC. We chose Bournemouth FC for the day as Poole Town happened to be playing away at Totton. The football day out started at The Ensbury Park Inn on Boundary Road – the local for Poppies regulars, well kind of. In there we had a quick pint and watched Portsmouth go 1-0 up on Man United in the FA Cup. We walked down to Victoria Park, home of Bournemouth FC, The Poppies!! There were four of us – myself, Gemma, Neil and Dan. Plus my mate of five years Austin Sheppard was already in the bar there waiting for us. 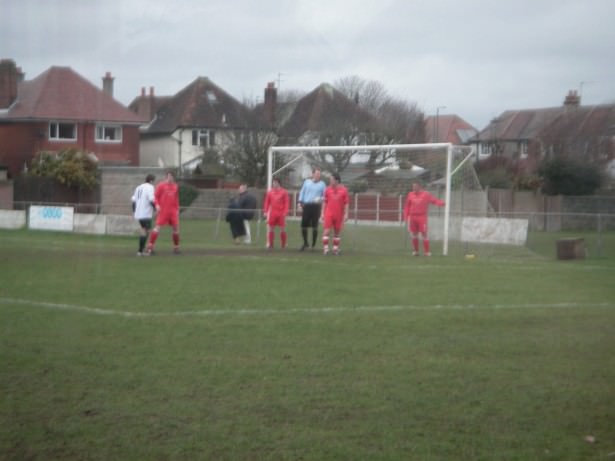 It was £5 in and I paid £1 for a programme as well, as a keen collecter and reader. We got pitchside enclosed seats in the bar and watched the final moments of Pompey’s 1-0 win at Old Trafford in there. Then I read the programme and enjoyed the warm up as the Poppies, in Liverpool red took to the field. Immediately apparent was the number 4 Lamin Dibba (from Cameroon I believe). He was a ball playing centre half, with composure, skill and great in the air. Dan had said he was the best player in the Christchurch match, and in this game, he again took control. Not before Alton Town broke down the right wing and shot weakly past Stewart Kearn in the Poppies goals. It was a lucky goal, but they all count. Suddenly the favourites, the Poppies were behind! That was the half-time score, but we got another beer in and watched the other results on one of the two TVs in the Official Poppies Bar. 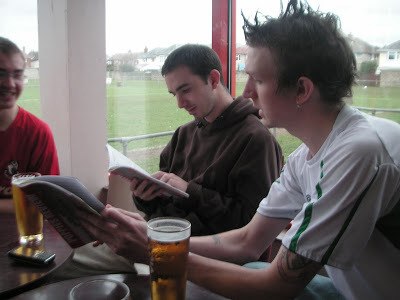 The Cherries were 1-0 down to Leeds, and we got ready for the second half. It was a cold day so we stayed in the bar and watched the game! But we got a great view of all the goals, which all happenned at the end next to our window pitch side seats. The Poppies began to take control and easily and confidently went 3-1 up. Three well taken goals were coupled with some glaring misses, but for which the Poppies would have won 5 or 6 to 1. By this point the Cherries were 2-0 down and had lost, but we had an amazing day out at the football watching Bournemouth FC – The Poppies. I just love the way you can go to any football match and enjoy it. I’d recommend it as a great day out. I spoke to Lamin Dibba after the match, quite a modest guy and I told him he was the best player on the pitch. A few of the players also posed for a photo with my friend Gemma Mornin, which was a nice gesture to round off a great afternoon at the football!

At AFC Bournemouth, we shout “Up the cherries, in all departments!”.