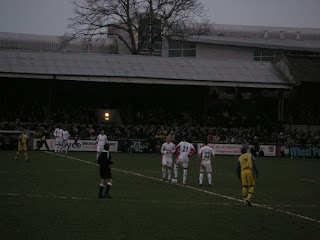 The second meeting of the South of England Northern Ireland Supporters Club was held in Torquay on the first Saturday on 2006. The reason for the meeting was that myself, Tim Beattie and Owen Millar wanted to get the club up and running fairly quickly and plan the year ahead. Owen suggested Torquay, because he lived there and also it just so happened that Torquay United (who were bottom of the football league) were playing at home to Birmingham City (of the Premiership) in the FA Cup third round. Owen sorted out the tickets and just three of us made the trip to Torquay. Owen set the meeting time and location and I ended up leaving my house in Bournemouth a 5 am. I walked down to the train station and caught a very early train. I then changed at both Southampton and Salisbury and met Tim who was on the train from Basingstoke. We started on the beers and read the papers on the way. I love the FA Cup and we did wonder if Torquay could pull off an upset. Tim also wanted to watch the Luton v. Liverpool match in the pub after the match. 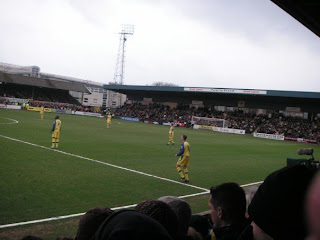 It must of taken me at least five hours from the door of my house to Torquay train station, but time is of no element for fun. As well I must admit I enjoy beauty in life and these countryside trains provide you with a relaxing and scenic journey even if it passes you by. Owen picked us up at Torquay station, which seemed miles from Torquay’s football stadium. We then went for the usual beer by the seafront. The pub was Seamus O’Donnell’s on Victory Parade. It was an easy option to choose an Irish pub, as we dressed in green and wore stupid green and white hats, so at least we couldn’t be refused entry, even if the pub was a fake Irish pub! We had our meeting in there and established where the club was going. In a way despite having only three of us, it seemed we sorted a lot, with Bristol being decided as the next meeting in March and I suggested Bournemouth should be the June meeting, with us to find out if Richboy would consider a May meeting in Southampton. We also sorted out the club amalgamation letters, club bank account and e-mail addresses. 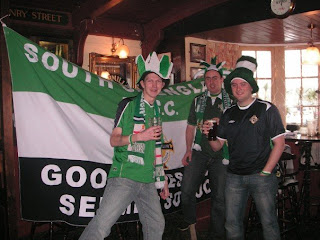 After a few pints in Seamus O’Donnells, we then got a taxi to St. Mary Church, the area where Plainmoor the Stadium is. We then went into O’Connor’s pub for some more pre-match pints. In there we met loads of Birmingham fans, who thought we were nuts dressing in green for a start, and also spoke highly of both Maik Taylor and Damien Johnson, two Northern Irish players at Birmingham. the pub was packed, but we still had time for a few beers, a kebab and then I bought a match programme, before Tim and Owen headed through the turnstiles while I got lost. Owen had got us into the Terrace Section, which was fantastic. We were in amongst the Torquay hardcore on the Popular Side. Torquay’s stadium itself is in the middle of a council estate. Its a nice tidy ground though. Owen and Tim put the club fleg up in the corner of the stadium (we got our photo taken beside it, but sadly in the fading light this didn’t come out) We got in just before kick off, with me getting lost on the way. It wouldn’t be hard to miss me dressed in green though, and soon Tim and Owen were pretending I was Dan and doing Alan Partridge impressions. “Dan! Dan!” they shouted and I heard them and squeezed my way through the yellow crowd to where they were stood. It was crampt for space but FA Cup fever had truly hit Torquay that day. 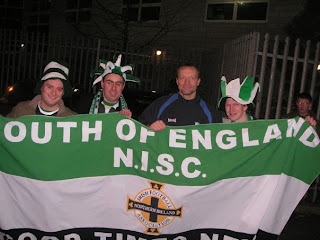 The funniest moment was the amount of dirty looks we got from Torquay United fans due to the fact that we were dressed in green. Torquay’s Devon rivals and the bigger club in there area were Plymouth Argyle, one of only two English league teams to play in green! And we were in green. “Are you Plymouth in disguise?” shouted one onlooker. My reply was “if I was in disguise, then I wouldn’t be wearing green”. Logical and true and eventually the Torquay fans warmed to our enthusiasm realising we were fully behind the Seagulls/The Gulls for the day. The Torquay fans started chanting and we joined in. Ironically Tim, Owen and myself were all from Bangor (or nearby at least) in Northern Ireland, and Bangor FC had some very obvious similarities to Torquay United FC. Both play in yellow and blue. Both play in a seaside resort. Both are nicknamed the gulls and seagulls. Both are relatively shite! Match made in heaven. The songs that came were “come on ye yellows…yellows…yellows” and “seasiders.” It seemed to be working on the pitch, as Torquay took control and in honesty shaded a dire first half, with Jo Kuffour going close and Maik Taylor pulling off a save or two. At half time we were able to chat to the boys around us who must have been convinced that we weren’t nutcases, we were just football fans. 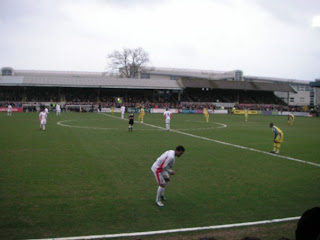 The second half repeated the first really on the pitch. Ask Tim, Owen or myself about the match itself and we would struggle to pull out highlights. There weren’t many and Torquay really should have swept Birmingham City out of the cup on the day. However it wasn’t to be and the Torquay fans could applaud their team of the pitch with a creditable 0-0 draw. Of course Birmingham won the replay 3-0, but that was predictable. Torquay had given it a good shot. Straight after the final whistle we hung around by the Birmingham City coach, as did some Torquay kids looking for autographs. I got Maik Taylor and Damien Johnson’s autograph on the match programme and both players kindly posed for photos and quick chats before getting back on the club coach. Damien Johnson actually emerged carrying two bags and a crate of water, which he set down while we chatted to him. I remember it was freezing and also windy as the club fleg kept flying up in the air. Maik Taylor was also very kind, giving Owen Millar his match gloves, gloves which had made some good saves on the day. We also randomly grabbed Nicky Butt to pose for a photo with our club fleg, given that he was English and we had just beaten them 1-0, it was all a joke really, but Butt posed for the photo (which never came out) and they all hopped back onto their bus, while us three headed for another pint, while Tim’s girlfriend Charley sorted out my route home on train, which was nice. 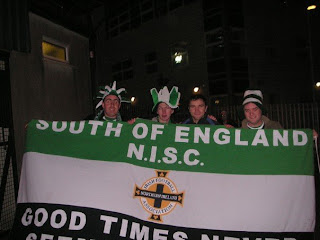 We went to this posh bar which showed the football. Tim was wearing a Yellow “Not Brazil” Northern Ireland top. I remember telling him how stupidly ironic it was that he should come all this way to Torquay wearing a yellow Northern Ireland shirt and for the duration of the match choose to wear the Green Northern Ireland top over it. It was almost perfect, yet neither almost nor perfect. Liverpool were leading Luton and soon we said bye to Owen Millar and Tim and I had to catch a train back. We stopped for food and a beer at Exeter I think and then I had to change twice again, before by 2 am I was back in Bournemouth and fairly knackered and had to work the next day in the shop. It was all a great day out and one of those for the history books of the South of England NISC.