“Here’s to those who bore us; and made us what we are” – The Seahorses. 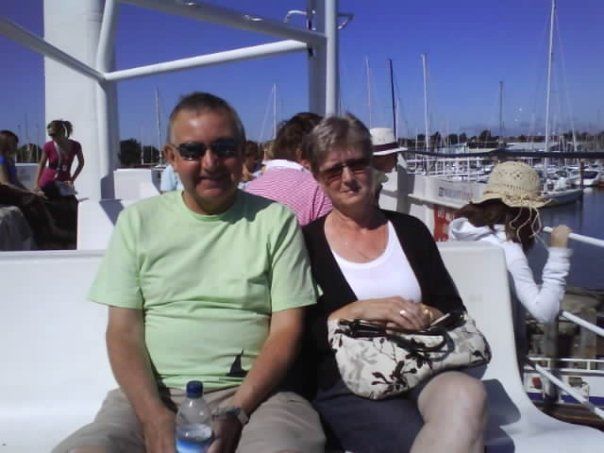 Dad and Mum on a ferry from Lymington to Yarmouth, Isle of Wight in 2008

It was meant to be, wasn’t it? Life was all a big circle. Here I was, 203 countries deep into my wacaday adventure around the world and I was finally in The Isle of Man!! This lesser ventured country is the fifth closest country to my home country of Northern Ireland yet it took me until July 2022 to finally make it here. 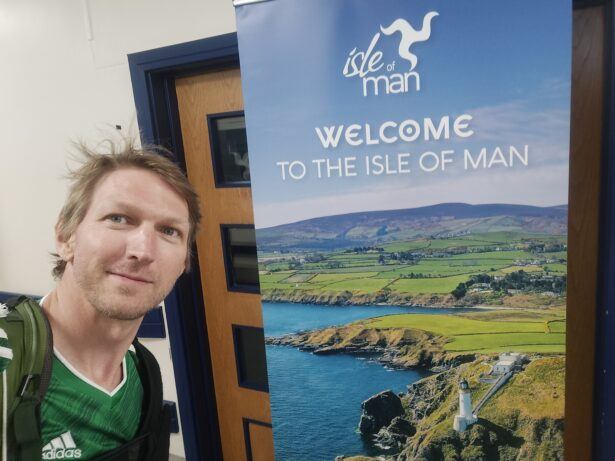 One of the reasons it took me so long was that it was almost too obvious. I mean, the Isle of Man is connected to Belfast by flight and ferry. It’s an easy trip from Northern Ireland, my astoundingly beautiful home country. I could have visited it any weekend as a child or teenager but I didn’t. I even worked on car ferries for two years and had a sister company offering me a free trip to the Isle of Man and still I didn’t even go! 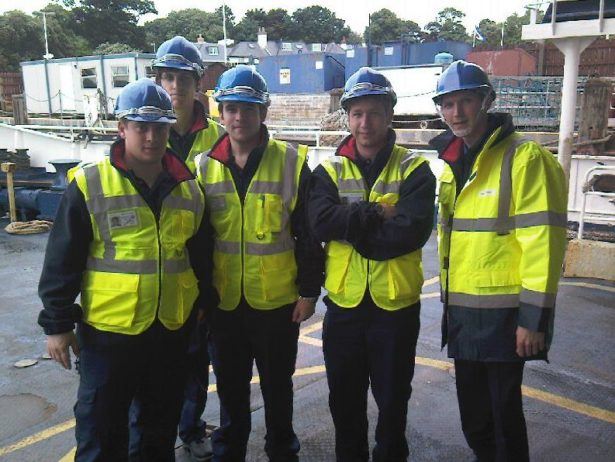 Working for Wightlink Car Ferries in 2008

It always eluded me. Perhaps I was saving it for my 200 country celebration, so that I could visit it with my family. But then COVID changed all that. My parents weren’t travelling much and my family never really travel much anyway. Actually it’s weird but neither of my brothers, nor my sister travel that often. I still hate staying in the same place all the time. COVID made travel more difficult, more risky and more dear. While sailing from Belfast to Liverpool, I also passed the Isle of Man over 20 times so I had seen it but never been to it. 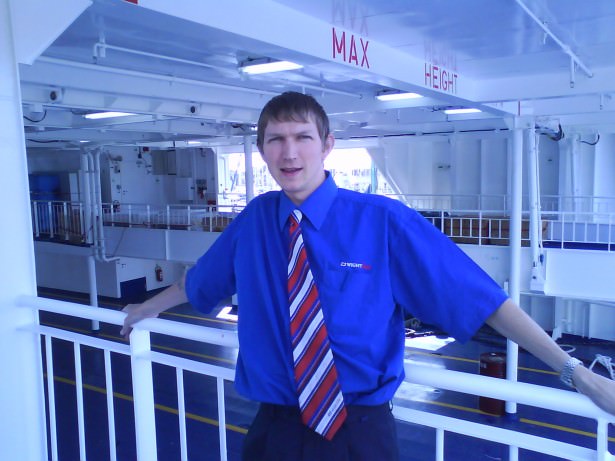 Working Wednesdays: Relaxing on the car deck in my job on the waves for Wightlink Ferries, Isle of Wight, England

Whatever reasons the Isle of Man was delayed for, I finally made it here in July 2022, on a ridiculously busy week. That same week saw me go to hospital in Warszawa, Póland to check the condition of my shoulder and arm. The same week saw me watch Northern Ireland at our first ever major tournament for the women’s team – Euro 2022 in England. The same week saw me backpack in Alderney for the first time ever, which included a return to Guernsey. The same week saw me visit King’s Somborne, Winchester, Southampton, Romsey, Canada Common and Brockenhurst. The same week also saw a reunion with Hippy James and the famous Millwall Neil in Greenwich London Town!! 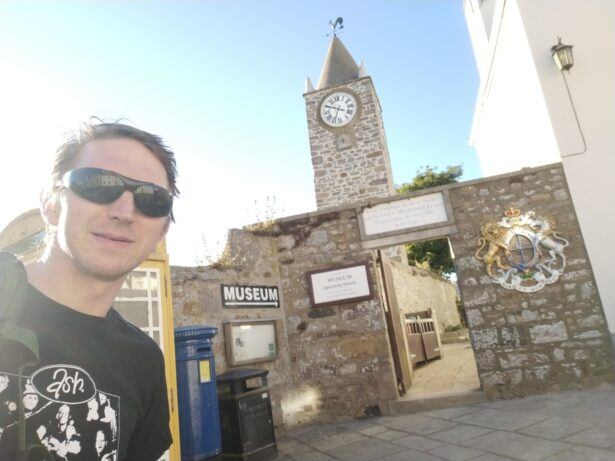 When all that ended, in a rush I found myself necking a pint of English ale at Wetherspoons in Gatwick Airport and boarding a flight to Ronaldsway International Airport in The Isle of Man 🇮🇲. 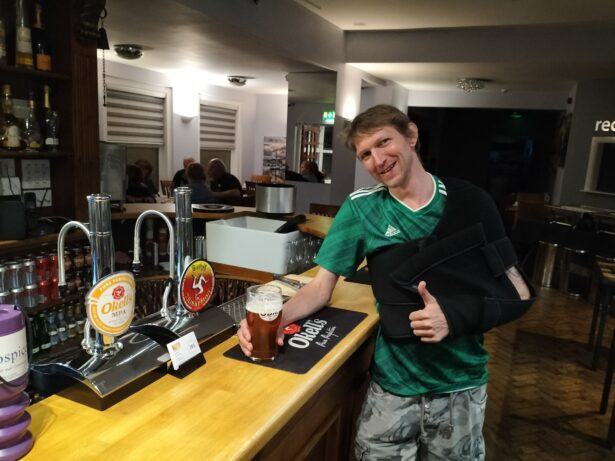 First beer in The Isle of Man

Mum and Dad enjoyed their honeymoon here in The Isle of Man back in September 1972. I was here two months shy of their exact 50 year mark. To all intents and purposes though, I was here FIFTY YEARS after Mum and Dad were here. Mum and Dad had only visited once, and hadn’t been back since. The whole trip was a magical full circle and a 50 year story waiting to be written. 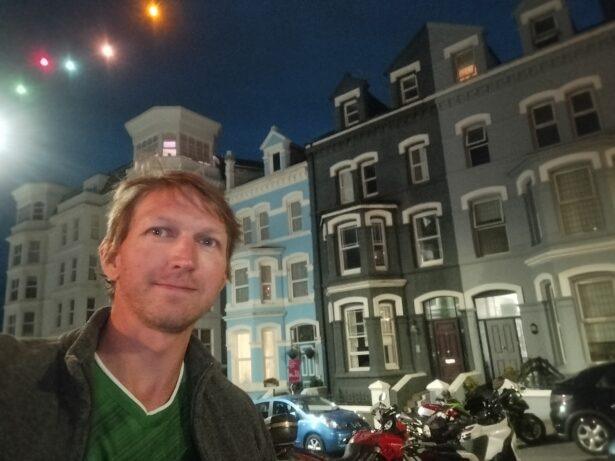 Jonny Scott Blair in The Isle of Man

I had spoken to Dad that week and he confirmed and remembered that they had stayed at a beautiful hotel on the seafront in Douglas, the capital city of The Isle of Man. The name of that hotel was The Sefton Hotel. 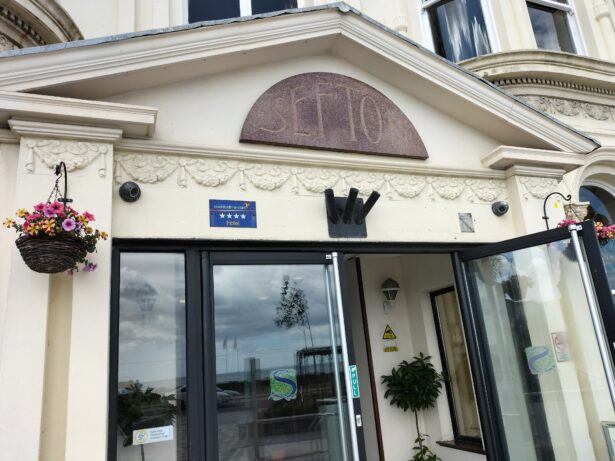 “I don’t know what tune the orchestra played, but it went by me sickly and sentimental” – Neil Finn. 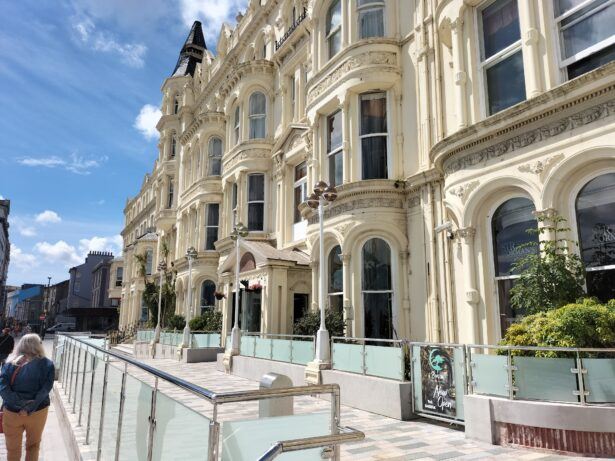 Initially I had considered sleeping here but I hadn’t considered the fact that I was arriving in The Isle of Man in one of their busiest weeks of the year!! The famous motorbike race, The Southern 100 was on!! This meant no chance of a cheap, sponsored or complimentary sentimental room in The Sefton Hotel hahaha – blogging had already given me over 300 free hotels/hostels down the years. 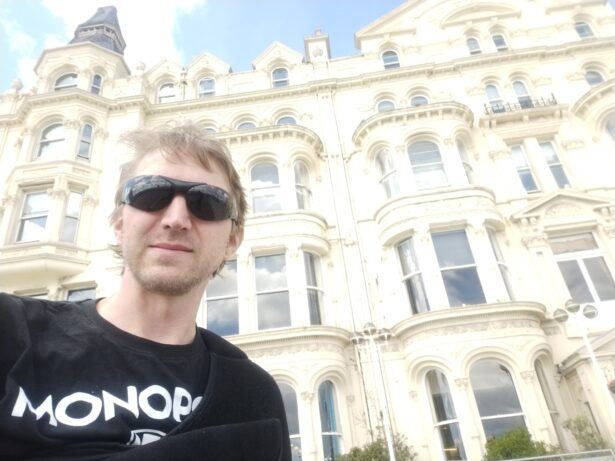 In fact, I think this made it sweeter for me that I didn’t stay here. I ended up staying in two other places in Douglas. I first slept in The Glen Mona Hotel near the seafront. I later slept in The Ascot Hotel, a street further inland up the hill. This meant my trip to The Sefton Hotel would be popping in to have a quick drink and a nosey. 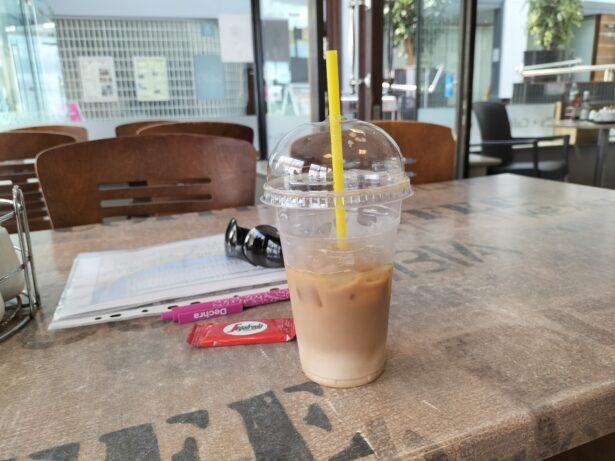 Final coffee before heading to The Sefton Hotel to become sentimental

Outside, a yellow facade. Worn, repainted unaged. My eyes stopped watching today as I drifted back to 1972. I don’t think I have ever been as emotional as this.

I imagined Mum and Dad, hand in hand walking along the seafront. Dad holding an ice cream and Mum admiring the sky and air. They smiled, they walked, they kissed, they laughed, they loved. My parents were once here, on their honeymoon on the Isle of Man.

As I faced the front door of the hotel, a shiver ran down my spine as I envisaged my parents walking up these steps and through that door, fifty years before me. 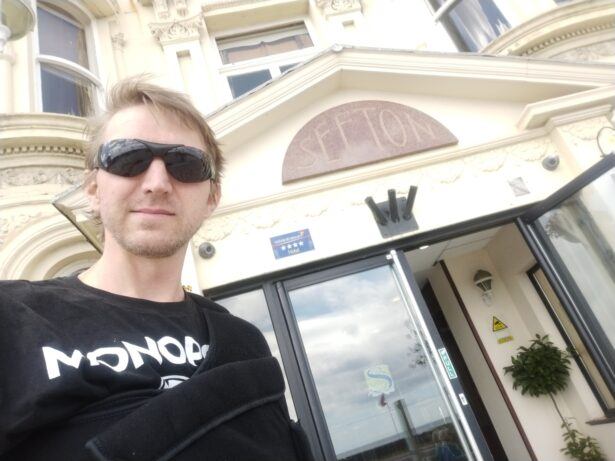 On my last day in The Isle of Man 🇮🇲, it was time to pop into The Sefton Hotel for a drink and a nosey…

The reception area was simple, nothing flamboyant. It was clean and modern. In fifty years, I’d guess it changed a lot. A sign read “Welcome To The Sefton Hotel”. 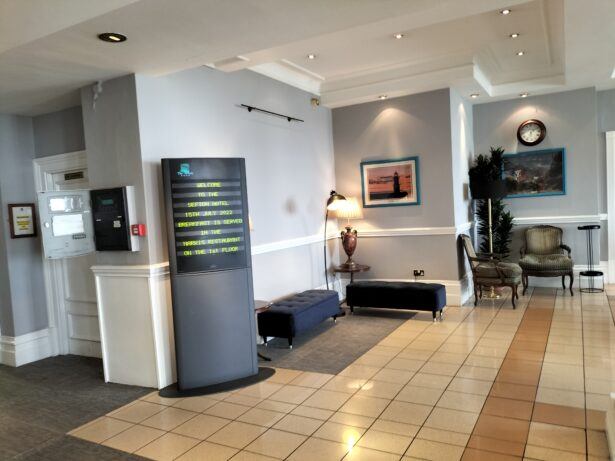 Reception in The Sefton Hotel 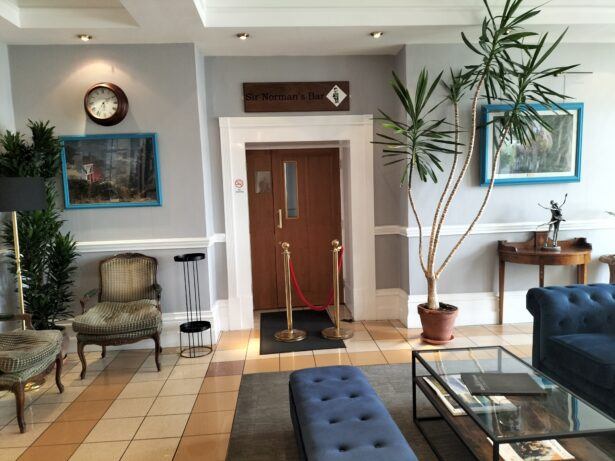 Reception in The Sefton Hotel

To the right was Sir Norman’s Bar. The staff said it would open at 2 p.m. that day. It didn’t and I never went in. I stared through the glass pane of a door, behind which perhaps in 1972 Dad sipped a cold lager whilst Mum sipped a soft drink. They were really here, back then. I was really here, back now. 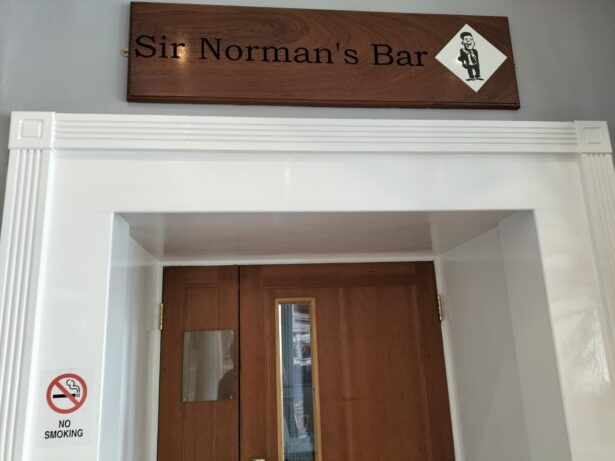 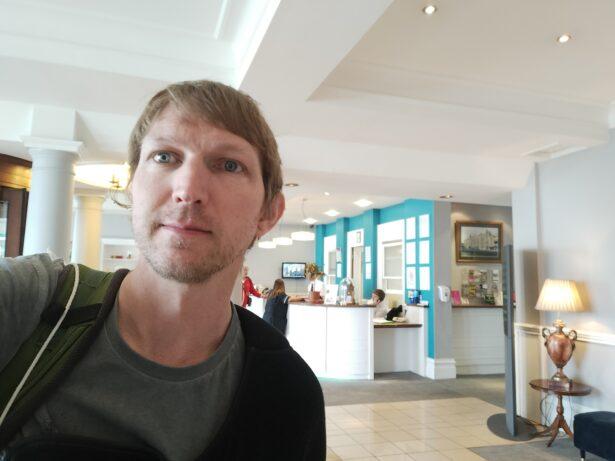 This was so magical. To the left was an Asian themed bar. La De Da. This place was called Bonsai and looked way too modern to have existed in the 1970s. It was state of the art. It was open and so the son of Muriel and Joe Blair was now here and could order a drink and a toast to my parents. 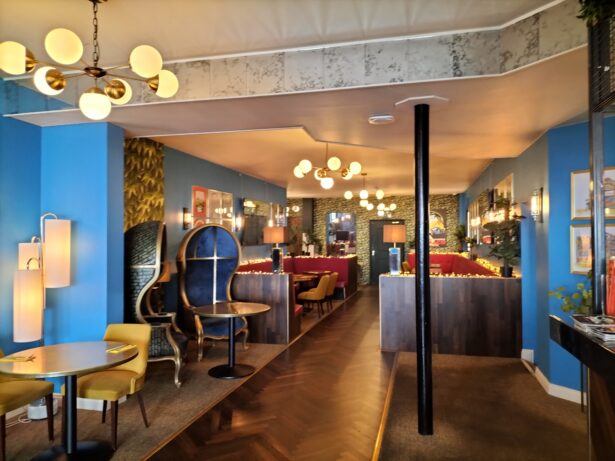 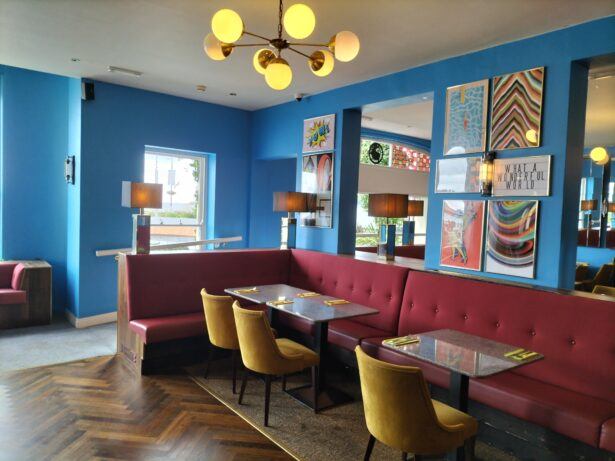 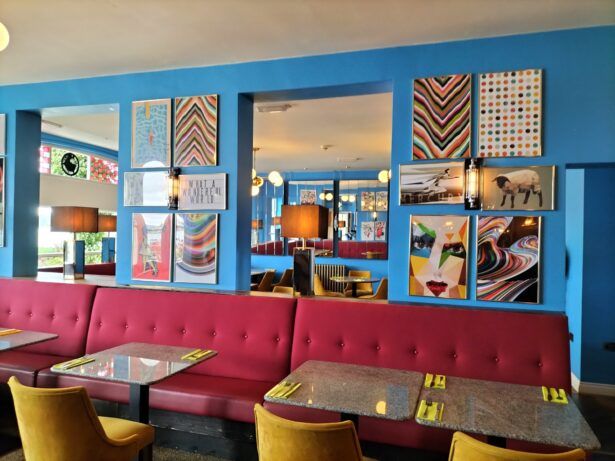 My loving parents. My wonderful parents. 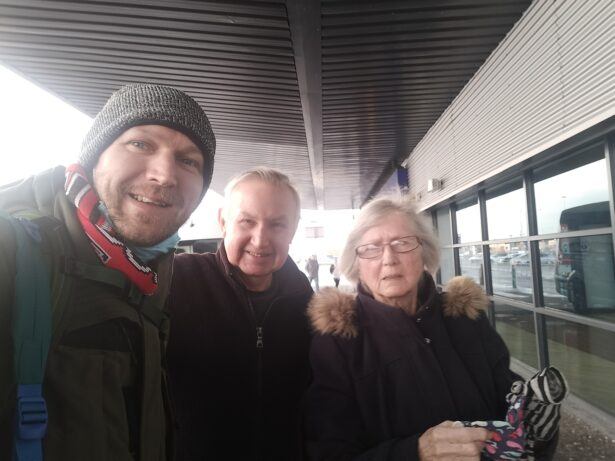 ” Some might say that we should never ponder on our thoughts today because they hold sway over time” – Noel Gallagher.

I ordered up an ice cold Leo beer. With each sip being glad of my existence and of my parents time here in this, cosy lounge. Sure, the bar might have changed and maybe they were dining and drinking and dancing in another room. 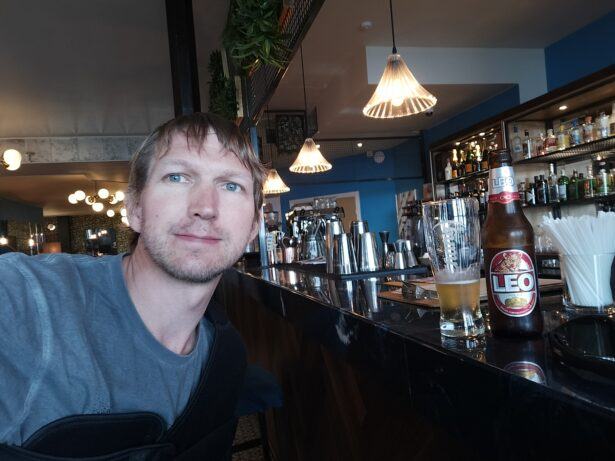 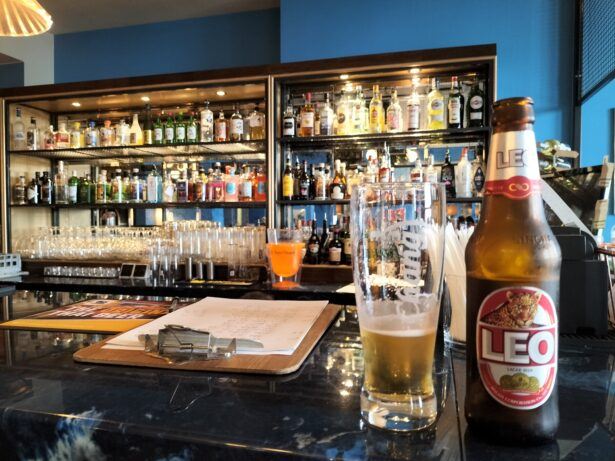 My Leo Beer in The Sefton Hotel

But I didn’t care about that. They were here and now I was here 50 years later – this was my moment to ponder.

I was very sentimental and then I cried. The tears flowed out. Shyly, I went to the toilet to wipe them away. I knew this would happen.

I sat alone. I finished my drink. I left the room and never looked back.

Here are the details for booking a room in The Sefton Hotel in Douglas, The Isle of Man 🇮🇲:

Here are a couple of videos I made at The Sefton Hotel in Douglas, The Isle of Man 🇮🇲: