“It’s the same room but everything’s different. You could fight the sleep but not the dream” – Neil Finn. 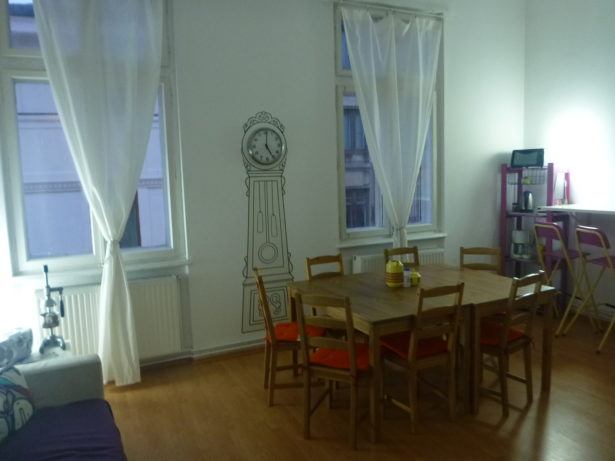 8 Year Saga: She Influenced All My Writing

How can a room in a building in a city on a planet influence your life? You can see a clock on the wall, time’s ticking, baby. In my case a scenario causing 8 years of depression and downward spiralko. It can and it will and this is the room. 15th November 2014, exactly 8 years ago. The sadness and the madness all began thereonin. But is this really all a blessing in the skies? Or is this really all a blessing in disguise? I’m going deep into love and life today, influenced by Finn and Gallagher. That makes a good name doesn’t it?

I’ve been to The Village and The Falls in the same photo by the way – can you do it?
(“Yes you can” – Barack Obama / Robbie Williams) 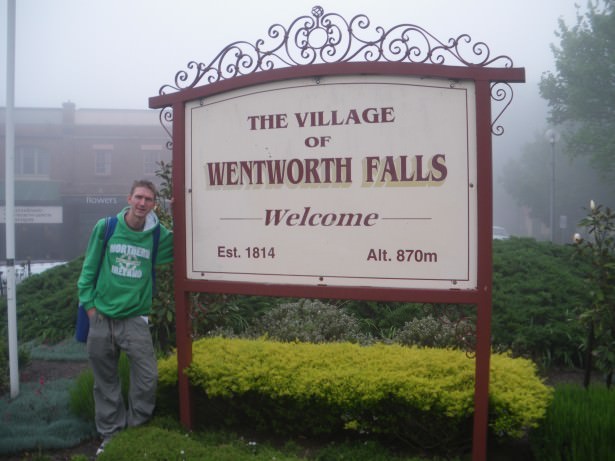 A brace of decades ago, I did The Village and The Falls in one photo – I was whackpacking in the Blue Mountains with zero cash left when life turned on its head

But actually, I stole the idea from Liam Gallagher and Neil Lennon, because get this –

That is nothing short of a wordsmith’s paradise. In 1997, I met Neil Lennon along with Gerry Taggart at an exact spot that I won’t forget at Belfast’s Aldergrove International Airport. I can take ye there now. The pair were actually having a cheeseburger and I dandered over. They chatted away and they signed a fanzine for me. No cameras in them days till capture that there moment, but there was me, and Gerry Taggart, and Neil Lennon. Both legends of mine and heroes on the soccerball field in the north of Ireland. My beautiful homeland. 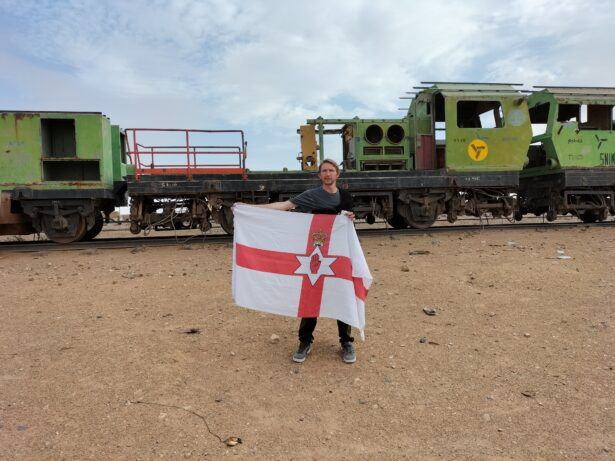 Years on and the madness leads me to Romania, to Bucharest, where I literally did NOT book a rest. It was a defining moment that took place right here, right there, right then… 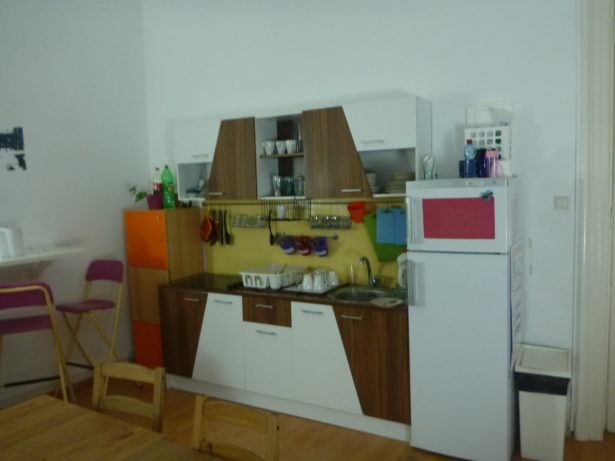 The ill-fated kitchen in Romania.

For a while, at least, I’d only show my dick to a waterfall, albeit a decent one on the Zambia till Zimbabwe border… 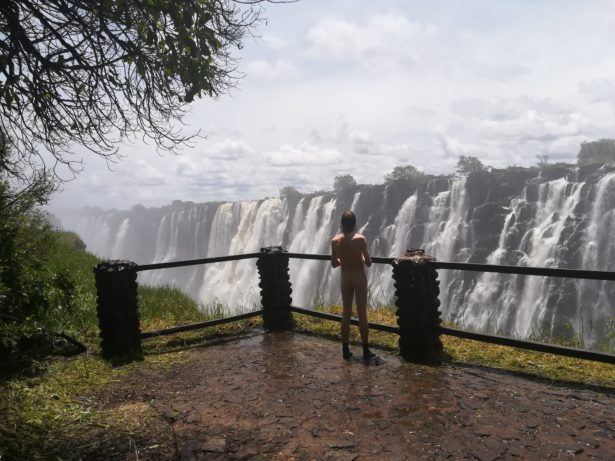 As the days pass, I find solace in my poetry and my writing. I didn’t really ever stop writing, or working these last 8 years, even in depression. For two and a half years of that I was solely self employed. It was a daydream, it was incredible. I cracked the travel blogging jigsaw and revelled in my own boring glory. I backpacked countries the legends of travel had never heard of, and I am still the only travel blogger to backpack through and write about Podjistan. Move over Beethoven, my Baby’s on the One After 909. I’d sell pencils to leaders and wear jeans to weddings. 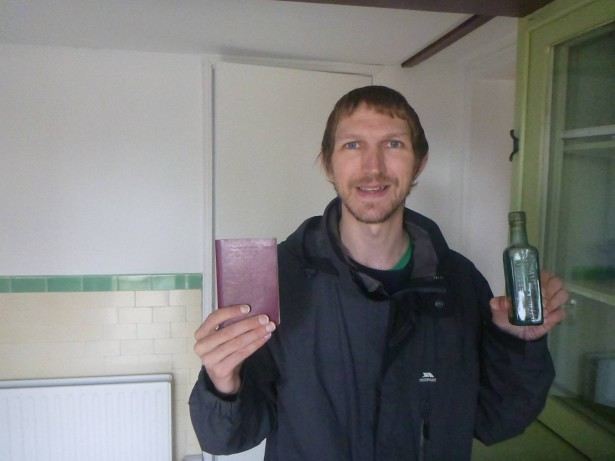 Passport stamped in the People’s Republic of Podjistan 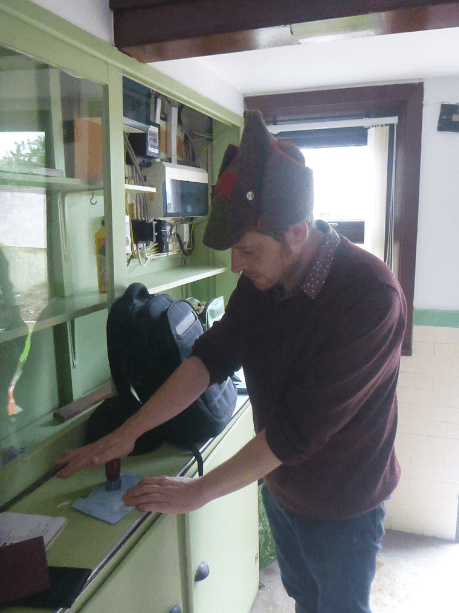 Getting my passport stamped in Podjistan 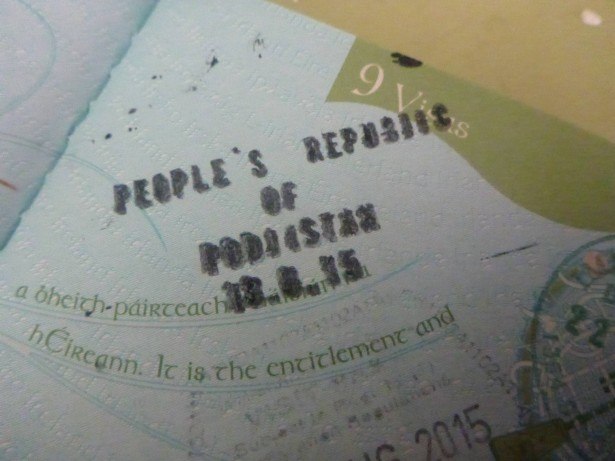 My Podjistan stamp on my Northern Irish passport

Workwise, profitwise, moneywise, I was only a professional travel blogger from June 2014 until December 2016. That was all I worked as in that 2.5 year period and not only did I survive, but I thrived. I was earning it and milking it without swapping cows in Colombia. On days off, I’d turn it to a day on. I didn’t do days off. I kept running. Water was flowing. Did someone say “Jason waterfalls”? Turncoat County Down Ulstermen aside (pint, Jason?), I was blossoming in the madness of a lovely niche. During that time, I wrote 6 books, released 3 e-Books and started a few new projects and websites. Some of those fell by the wayside. Actually, most if not all of those fell by the Wearside, or was it Tyneside, or Tynecastle, or tearside? I started the project millwallneil.com for the famous Millwall Neil. Neither of us had time to keep it up. The domain expired before Millwall got a chance to get into the top flight again. Imagine the Cherries doing that braceic??

Manchester City fans to us – “Where were you when you were shit????”

AFC Bournemouth fans back till them – “Playing you in Division Three at Maine Road!!” 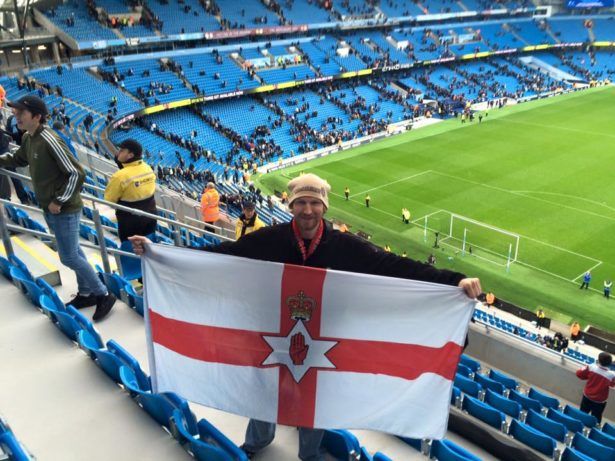 Man City away as one of 3,000 Cherries. Where were you when we were shit?

I also started a budget backpacker PR company which failed because I didn’t spend enough time on it, nor promote it. I didn’t even know what it was apart from getting myself free tours and hotels for 2.5 years. Actually, it was a success but only for me, a little for Panny Yu and the girls that came after. I slept, dined, willied and flagged in 5 star paradises. I spent a night in Madonna’s town, and rested my gaelic head in the Mad Hatter after a night on the sauce when the Cherries topped a division. I whackpacked all that carnage so you didn’t have to. Not really…

“With all that’s gone before, my motive’s never felt so pure” Mark Morriss. 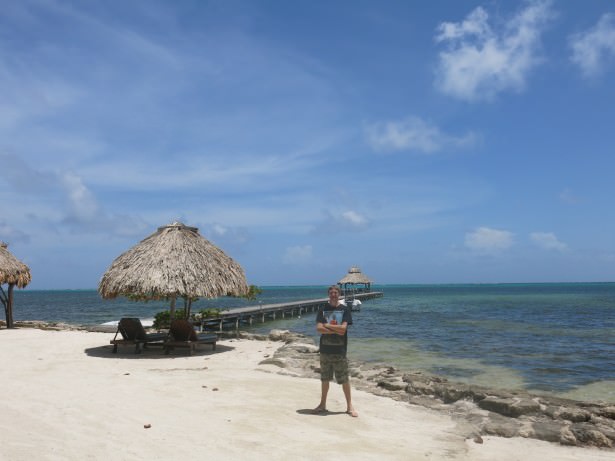 Xanadu a paradise for us in Belize.

During that 8 year timeframe, I backpacked to 6 continents, cracked 130 countries (still Northern Ireland, England, Poland, Uruguay and Taiwan will be the top 5), and I estimate that I earned $100,000 US and wasted it all on travel, football and friendship. Suddenly, as December 2016 came into view, I was lost, alone, single, bored, moneyless but yet I had all that experience of travel, writing, teaching, barwork, blogging and PR. For whatever reason God dealt me, after some sincere visits to Poland’s Catholic church masses (where I was mostly there for self-healing and not for learning the language), I ended up doing a weekend course as a teacher in Kuklowka in Poland and was alive again. I didn’t need to be a full-time professional travel blogger anymore. I was done with that shit. I could now juggle my balls between a hat-trick – teaching, writing books and blogging (which includes social media outreach). I used my travel knowledge and football geekage to become a good teacher again. Are you really?

“Tell me love isn’t true. It’s just something that we do” – Madonna. 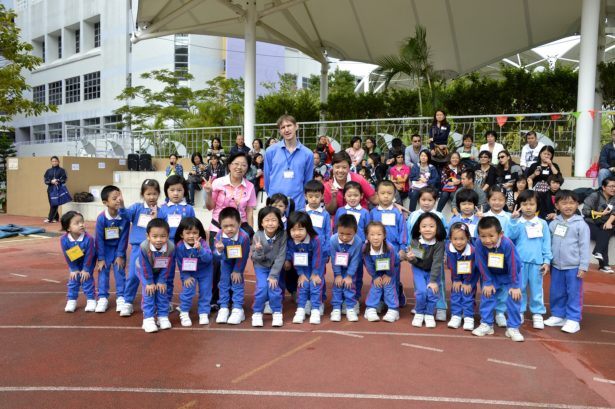 Teaching English in Hong Kong in 2011 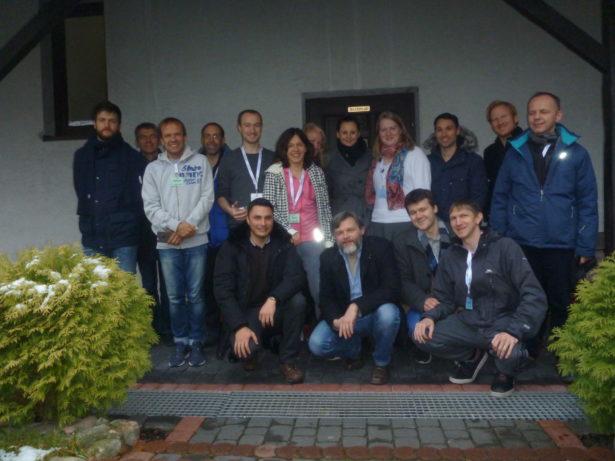 Teaching English in Kuklowka in 2016.

Some people said that teaching and barmanship didn’t suit me – you were wrong. They gave my depression an outlet where I was still earning money and not needing to gurn my bake out. I’d go to work as a real professional and I’d come home gurning my bake out. Nobody had to know. My relationship with budget backpacker Panny Yu came to an end on the exact day of its 5 year anniversary. Yeah that’s the way I don’t do rock and roll. Innit mate? You’ve always got yer mates, and now I had bank accounts in 5 different countries. 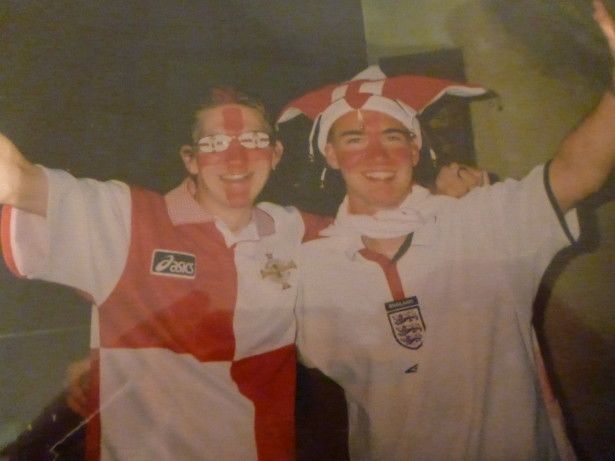 I felt bad about my friendships during my wonderful time with Panny – I had neglected them so the bonds were tied. The good thing is that Panny met most of those best friends and she knew how important it all was to me and she embraced all that with Hong Kongic aplomb. Up the Cherries. GAWA. Boscombe Back Of The Net. Dad’s days at Dunmurry Rec. The Glentoran. The Polish cheeseburger lads. She liked all my best friends. She met the famous Millwall Neil a few times – in South Korea and in the Kong. She partied with Richard and Amy – probably the most gorgeous couple (and two daughters) I know outside my Mum and Dad. Panny also gave me a night off in Georgia to party with my best Polish mate Rafał Kowalczyk. 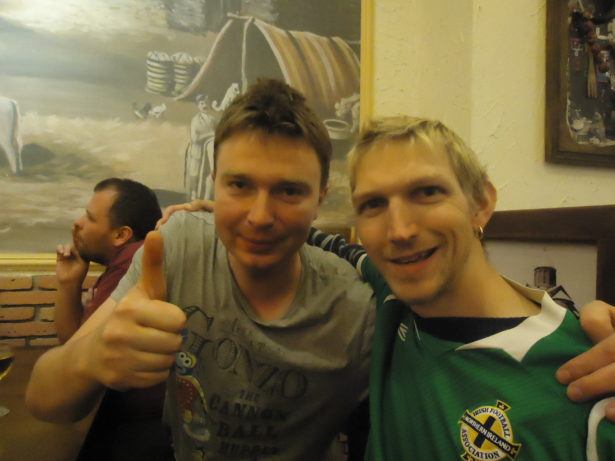 That night in Tbilisi, the Georgian capital, was a good night, and a needed one. I promised to whackpack Panny to Stalin’s Town the following morning, early doors – I did it. Now, hold on – where did it all go wrong? Why a kitchen in Bucharest???

“Smiling as the shit comes down” – Neil Finn. 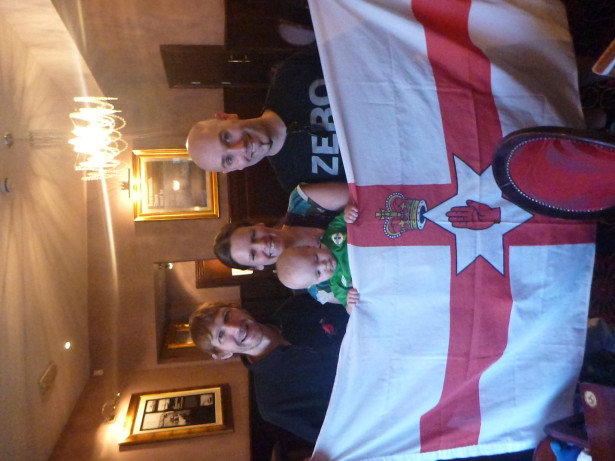 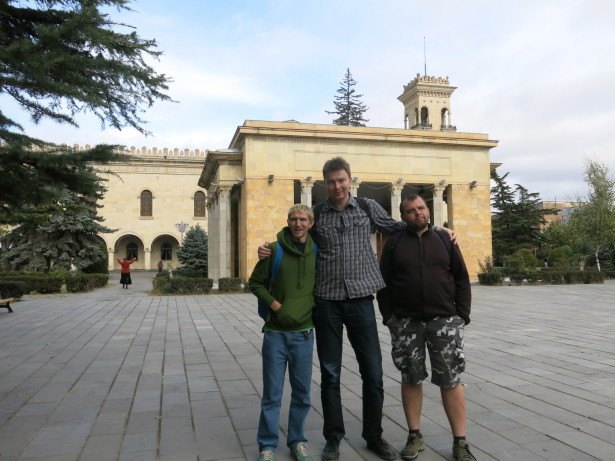 As a travel blogger, I excelled to the point where I had built up about 50,000 travel contacts on email by the end of 2016. These ranged from tour companies, to freelancers, to bloggers, to airlines, to hotels, to hostels, to mobile phone companies, to apps, to toothpaste factories. The niche was so wide, we couldn’t use the word niche anymore. I was paid to go backpacking in Senegal.

“For a moment there, I lost myself” – Radiohead. 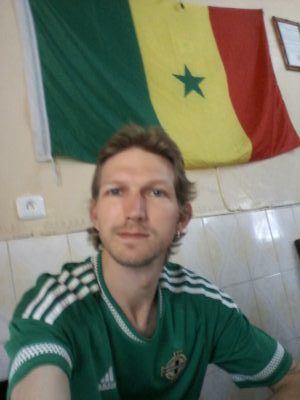 Backpacking in Senegal in 2016 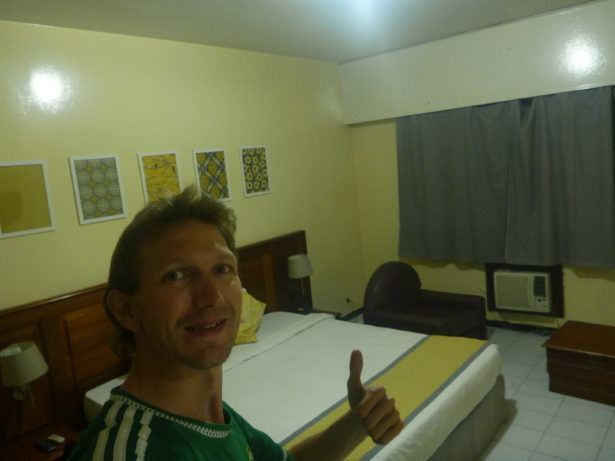 My cosy room at Hotel Baraka in Dowtown Dakar, Senegal

In the middle of all that, the truth is I fell in love with a girl in that kitchen. That kitchen in Bucharest. That kitchen. That’s the truth. It didn’t end too well but I don’t know who to blame anymore, anywhere, anyway, anyday, anyhow. I could only blame myself, and maybe her. It doesn’t matter anymore, it’s been and gone and one day, I’ll chat to her and find out if the story can be written in its entireity. Right now, you’re stuck with my blog and my upcoming books. This blog post took me 2 hours to write. That’s an hour longer than normal. So finally… 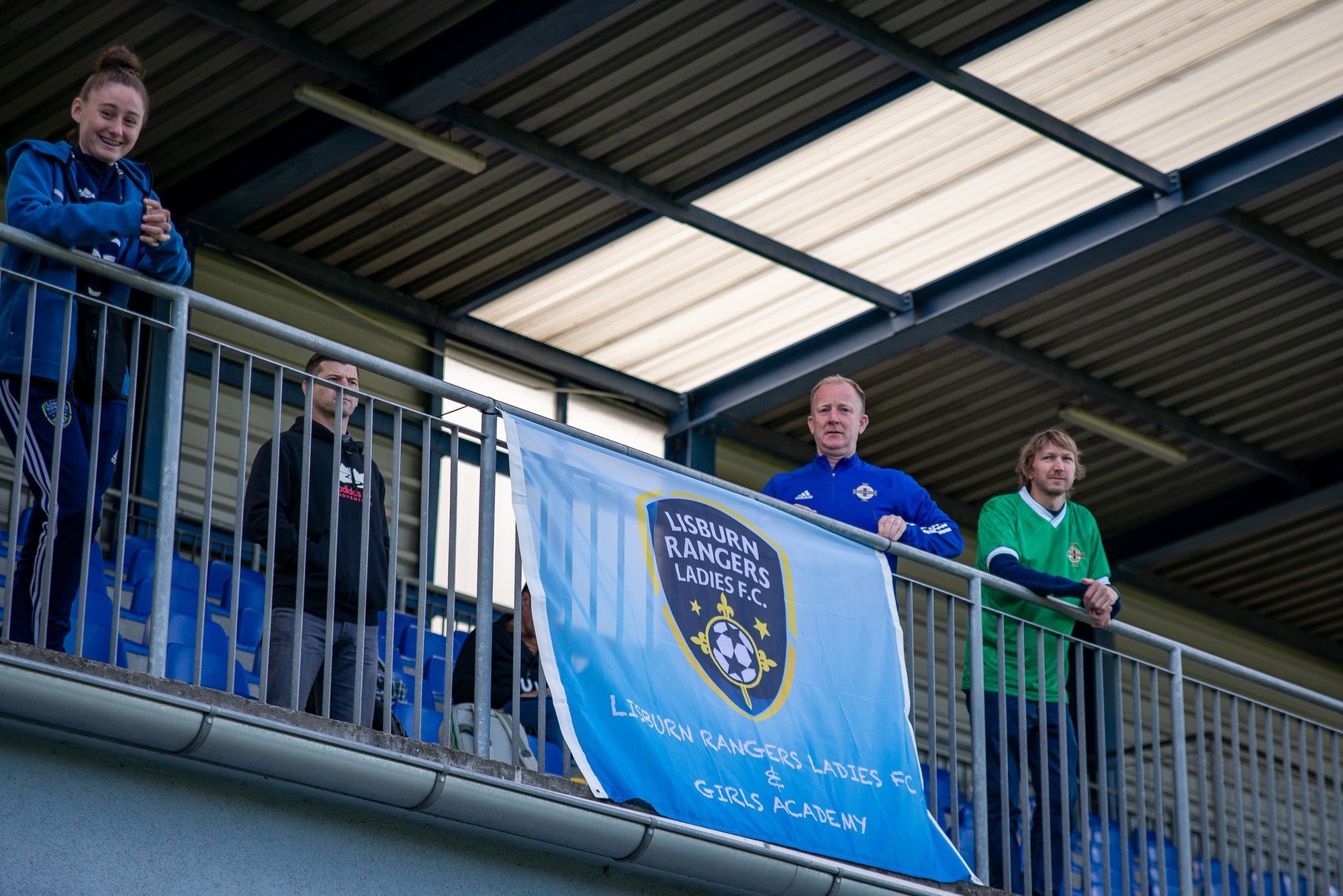 I just hope all of you are happy and healthy. We know this was a long journey those last 8 years and I went through downs and up and, as Jon Bon Jovi wrote… 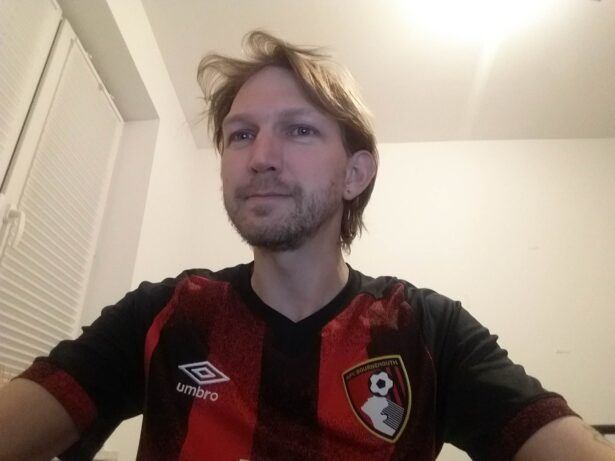 “Up the Cherries in all departments” – AFC Bournemouth fans.

Tonight, Jonny Scott Blair is healthy and happy. That could be the key to the rest of all our worlds. If you don’t do anything else in your life, don’t stop living. It’s something I stole from a high school wall in Toronto, Canada. I live by it and so should we all. 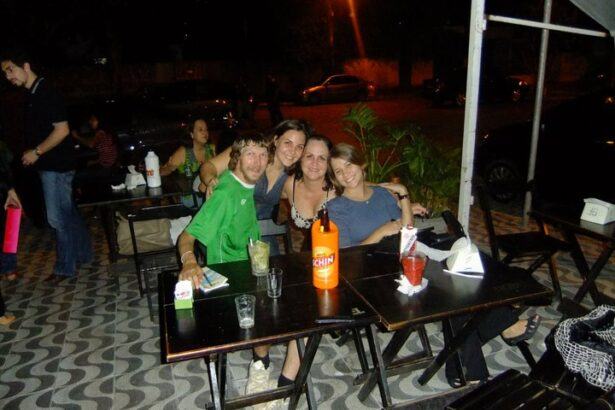 Smile One Time Forever: For Renata Alves – Recife Love While Backpacking in Brazil

Rest in peace Renata Alves, we love you. Smile One Time Forever

And best wishes to NL, PY, NM, CMcK, VE, KC and the Molly that is that… 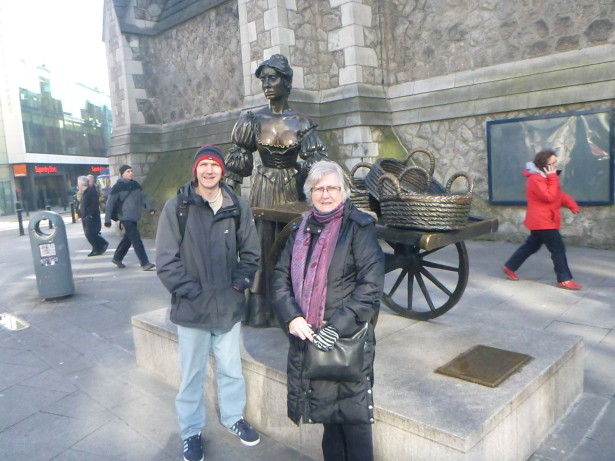