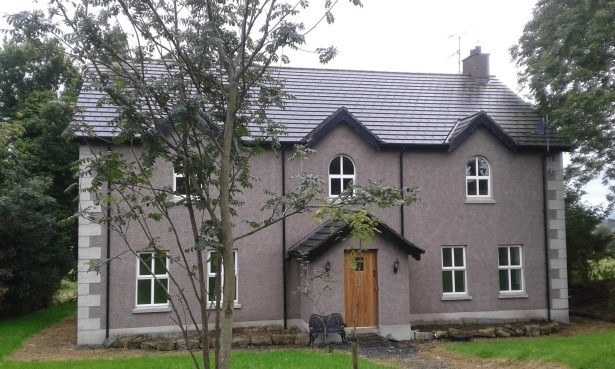 Backpacking in the Peoples Republic of Podjistan: Top 10 Sights in The Peoples Palace (The Capital)

I recently went backpacking in the Peoples Republic of Podjistan, this is a tiny, unknown country that borders Northern Ireland. It’s Northern Ireland’s only bordering Micronation and the only non-Muslim country in the world that bans the display and consumption of both Buckfast and Coca Cola products. After crossing the border from Mill Road in Northern Ireland (part of the United Kingdom) to Four Gables in Podjistan, I got my passport checked and stamped and then went on a tour of this truly wacky oddball republic. One of the highlights was my “access all areas tour” of the capital city. Podjistan’s capital is called The People’s Palace. Here are my top 10 Sights in The Peoples Palace (The Capital). 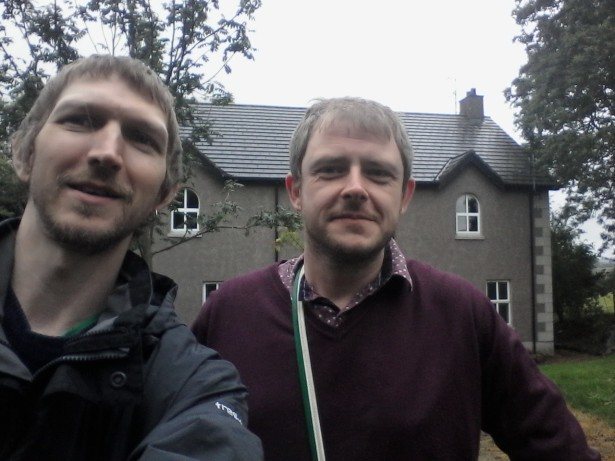 1.Howlers Wall
You’ve heard of the Great Wall of China (big deal), you’ve been to the Walls of Jericho (average), you’ve touched the last remnants of the Berlin Wall (they’re history), but you ain’t seen nothing brother until you’ve seen Howlers Wall in the People’s Palace in Podjistan. This is a magnificent work of art with history to it and not a war in sight. 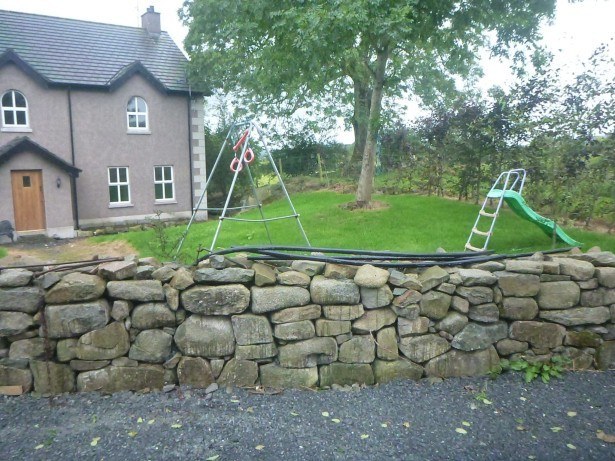 The most impressive aspect to the People’s Palace and the Howlers Wall is that they were built entirely from scratch and by the Podjistani people themselves. They built their own home here. The dry stone wall was part of the country’s ‘Good Works Programme’, it was entirely hand built by Podjistani citizens from stones found within the nation and is named ‘Howlers Wall’. Beat that, China.

2.Entrance Hall
Over the years I have backpacked through a few different republics and some obscure countries so I’m used to border offices, signposts for capital cities and all that. There is no signpost either outside or inside the capital of Podjistan. But the Entrance Hall is mightily impressive. You walk down the path and on my guided tour, Mr. Stewart gave a full introduction to the Peoples Republic of Podjistan on arrival in the entrance hall. I had already backpacked my way through Four Gables and the outlying villages of rural Podjistan, but it was on arrival in the capital that you feel the importance and energy of the nation. 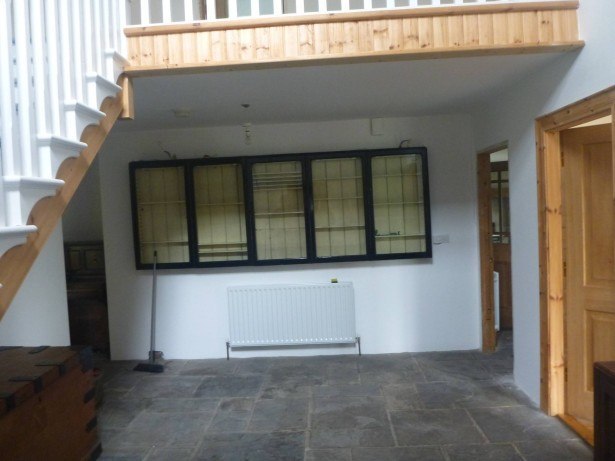 The Entrance Hall in the capital city of Podjistan

With a stone floor, a winding staircase and white walls, this is an elaborate arrival into the capital, and just above us is a balcony overlooking the entrance hall and porch. In front of us is a cabinet, this is the cabinet of curiosity. It now sadly lies empty, for reasons which I will reveal but this was once one of the most important parts of the country. 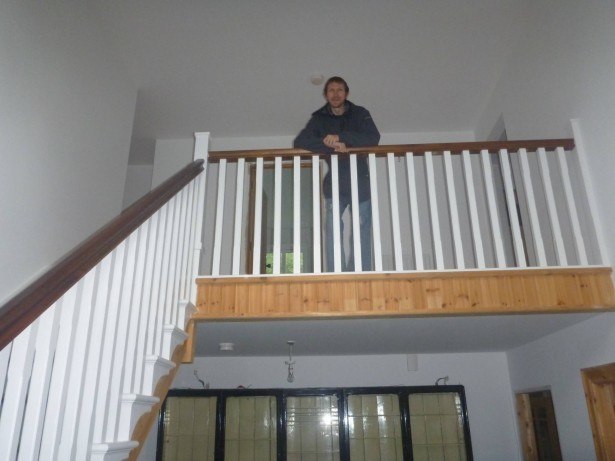 Touring the capital city of Podjistan – The People’s Palace

3.Cabinet of Curiosity
In its heyday the Cabinet of Curiosity would have doubled as Podjistan’s public museum. The relics and items contained within are random and sublime. This is no ordinary cabinet. Mr. Stewart took time to show me some of the items from the cabinet and indeed I am presented with a Podjistan flag and a glass bottle to keep as a souvenir from my visit. Guns, gas masks, dolls and soda water bottles are some of the relics from the golden years of the People’s Palace in Podjistan. It’s so sublime it’s almost ridiculous. 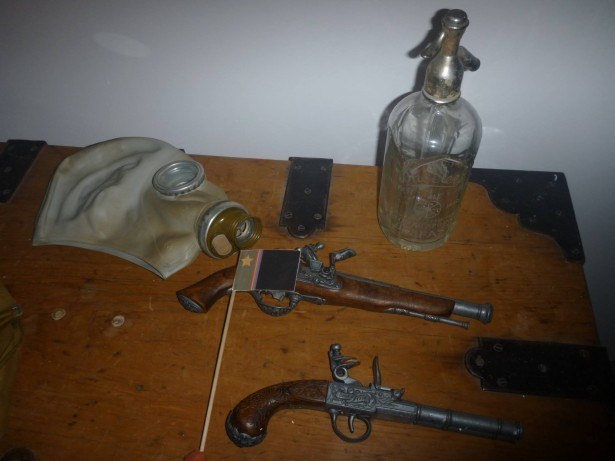 Some Podjistan relics from the cabinet of curiosity

Sadly though, the cabinet has been cleared as part of the country’s future plans.

4.National Stadium
The National Sport of Podjistan is Subbuteo and they are no small fry here – the national football stadium is a regulation sized Subbuteo pitch. Mr. Stewart himself has represented neighbouring country Northern Ireland at the Subbuteo British Championships and World Cup. The population of Podjistan peaked at 7, which is also the maximum home attendance for Subbuteo matches here. 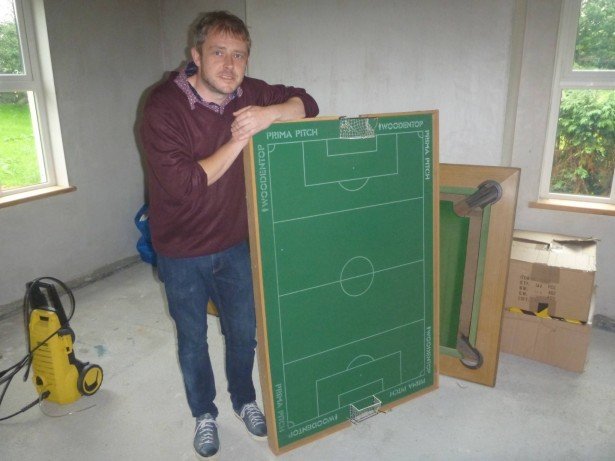 Simon Stewart and the former National Stadium of Podjistan.

It’s a tough stadium to win away in, even if the away team brings more fans. Mr. Stewart is a master of Subbuteo. The stadium is also up the stairs, which poses an altitude advantage to the home side. However, the national stadium is currently under redevelopment and may be moved to Northern Ireland in the future. As you can see from my picture, the room that housed the national stadium is currently being cleaned and cleared. The Podjistan National team has a proud home record but the physical existence of a stadium in the Peoples Republic may not be around forever. The daughter of the Head of State, Georgia also played Subbuteo and had a world top 20 ranking in the ladies category at one point!

5.The Peoples Chamber
Government meetings, liasing with foreigners and planning the country’s internal and external affairs were all carried out in The Peoples Chamber. It has a fireplace which is used in wintertime. Podjistan has one of the lowest average temperatures on the island of Ireland, due to its proximity to the Northern Irish town of Katesbridge, which often freezes in the winter months. 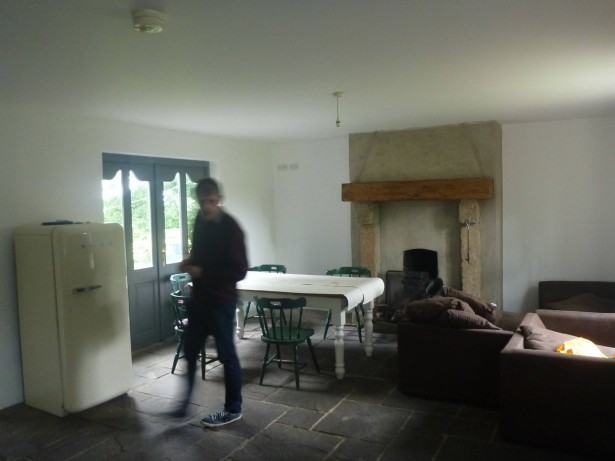 6.Podjistani Leader’s Mausoleum
Upstairs in one of the rooms in an open glass cabinet, which acts as a mausoleum. I was intrigued by this, and on arrival, Mr. Stewart demonstrated to me what it will look like when he is inside the Mausoleum. Podjistan was formed in 2010 so obviously they have only ever had one leader in what is a benevolent dictatorship. This means there are no Mausoleums on display of previous leaders, nor any need for an actual Mausoleum room as yet. Having seen the mausoleums of Kim Jong Il, Ho Chi Minh and Lenin on my travels, General Podjov’s mausoleum is one I can say I have seen prior to its usage. 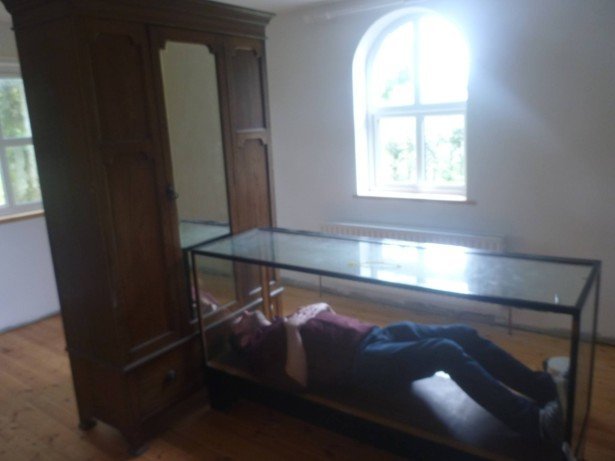 7.Mourne Viewpoint
Perhaps the most significant sight for the sightseeing backpacker is the viewpoint from the People’s Palace over to the Mourne Mountains. The Mourne Mountains are across the border in County Down, Northern Ireland. They can be viewed from the windows of some of the upper indoor rooms in the Peoples Palace, and also from the rear national park on the property. 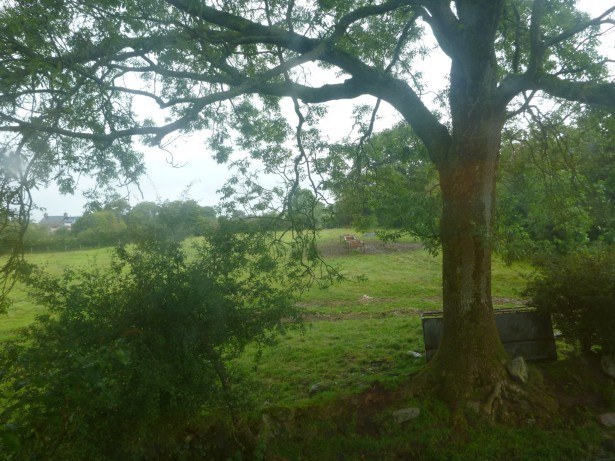 Viewpoint to the Mourne Mountains

8.National Theatre
A piano sits just to the north of the Entrance Hall and when played, the sound echoes through the hall and chamber area creating the National Theatre and Opera. The National Anthem of Podjistan is Podjistani People by Sly and the Family Stone, which is also played to visitors to the country during immigration. The Peoples Palace Grand Podjistani Piano is also the largest musical instrument in the country. It’s a tad dusty in places and may also be out of tune, but it still works. 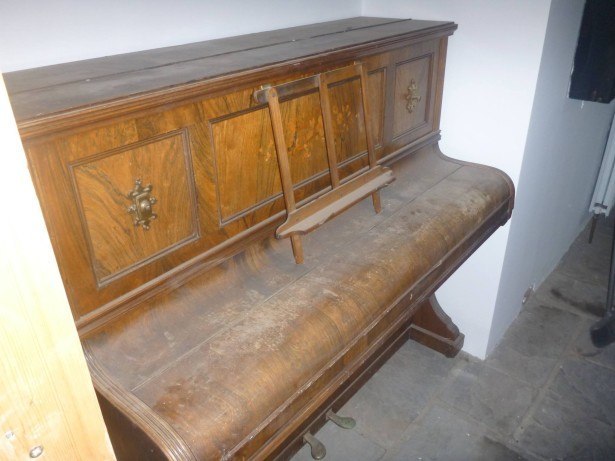 9. National Fleg of Podjistan
There was one slight disappointment on my tour and that was that due to the renovation of the Peoples Palace, the National Fleg (flag) of Podjistan was not on display. To respect the best interests of the nation, I chose not to fly my Travelling Northern Ireland flag but was at least delighted to be presented with a miniature Podjistani Fleg (flag) to pose with and to take home as a present. It was just slightly disappointing not to see the fleg hanging from a pole on the Peoples Palace, as most countries do. Posing with the national fleg of Podjistan

10.The Highest Point of Podjistan
I climbed to the attic up a stepladder and this place is also famous as being the highest peak (man made) or point in the country of Podjistan. These days the attic is used as a storage base, but one of its purposes would be as a hideout in case of invasion from neighbouring Northern Ireland or the United Kingdom. Fro a backpacker perspective I have to be honest and say that it’s not a pretty sight though it contains some board games and jigsaws, but it’s big, safe and offers a good wee spyhole across the border into Northern Ireland. The Highest Point in Podjistan – the attic

All in all, it was a brilliant access all areas tour of the Peoples Palace here in Podjistan. I also visited a few other parts of the capital that I haven’t mentioned on here, so it’s a lot bigger than you think. 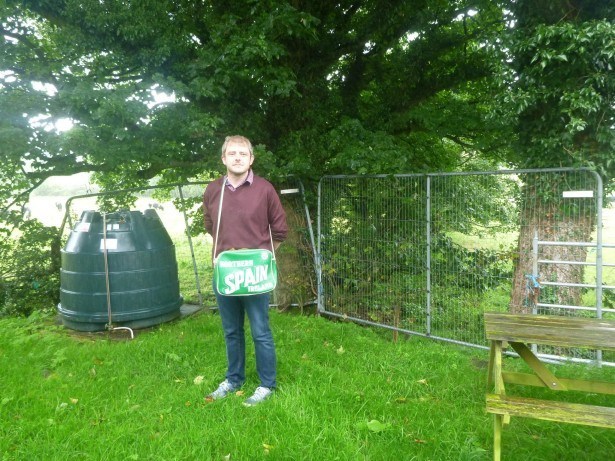 Simon Stewart in one of The National Parks in Podjistan behind the Peoples Palace.

I can confirm that the Peoples Palace in Podjistan is one of the wackier places to get on your “F*ckit it” list of things to do before you die. Sadly though, the physical existence of Podjistan may be coming to an end and it looks like I was the first and last genuine backpacking tourist to visit the country. As the land owned by the Peoples Republic of Podjistann prepares to be sold back to Northern Ireland, Simon Stewart gets out his globe and confirms that the Peoples Republic of Podjistan will always exist in some way, even if the country ceases to occupy this incredible geographic region that it once did. The country was formed in 2010 and as we reach the end of 2015, who knows how much longer the PRO Podjistan will exist here. Another brick in the wall, another dot on Mr. Stewart’s globe. 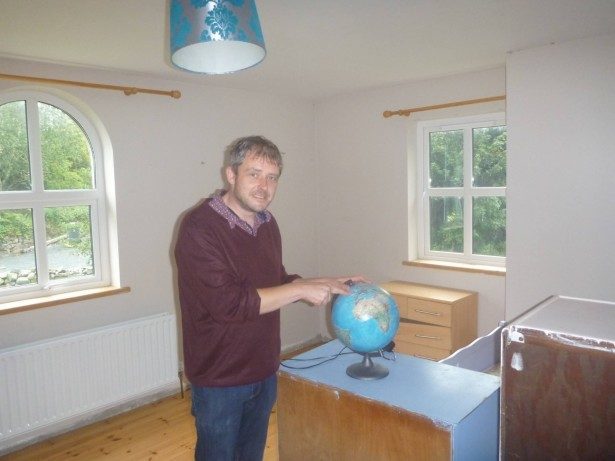 The Peoples Republic of Podjistan is one of the most fascinating countries I have been recently, just as cool as Ladonia, Faroe Islands, Bahrain, Bangladesh, Gibraltar and Christiania. Even the bathroom tiles in the Peoples Palace are uniquely Podjistani and can be found nowhere else. Here are some other links for further reading and exploring on Podjistan:
Podjistan’s National Televison Channel
Follow Podjistan on Facebook
Podjistan National Photo Gallery
How to Cross from Northern Ireland into Podjistan
All You Need to Know about Podjistan
Peoples Republic of Podjistan on Wiki

Thanks to my Mum, Muriel Blair for driving me to Podjistan, my sister Cathy for her role in this adventure and to Mr. Simon Stewart (Comrade General Papa Podjov) and the government of the People’s Republic of Podjistan for welcoming me to the country and giving me a guided tour in an “access all areas” tour of the country. The memories will linger forever. 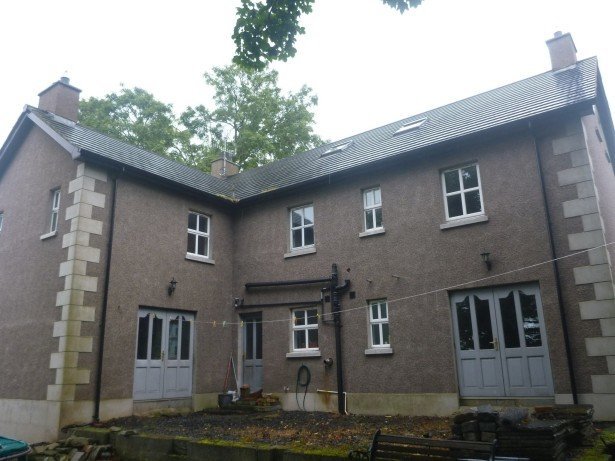 A rear view of the Peoples Palace, Podjistan

Here are some videos from my time backpacking in Podjistan, safe travels!!

17 thoughts on “Backpacking in the Peoples Republic of Podjistan: Top 10 Sights in The Peoples Palace (The Capital)”