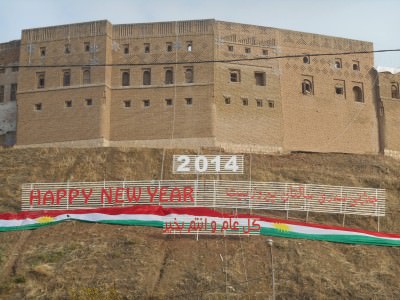 Top 15 Things to see and do in Erbil, Kurdistan, Iraq.

These days, most backpackers that make the decision to visit Iraq will end up at some point in the city of Erbil. Erbil is the capital city of the Kurdistan region. It’s a thriving hub and this is where you get a real feel for Kurdish life and indeed the part of Iraq that you didn’t quite know about. I spent a total of 10 days in Iraqi Kurdistan and about half of those were actually in and around Erbil. 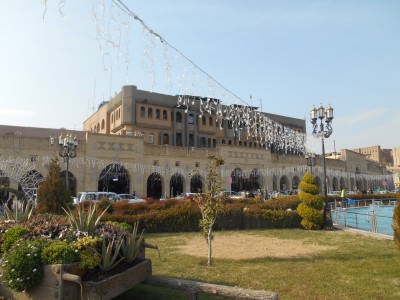 Before I go on, it’s important to note that Erbil is often also called Hawler and interchangeably spelt Irbil and Arbil. On flight tickets and most places around the city, it’s spelt Erbil. For the basis of this post, we’ll go with Erbil. Also, I am trying to avoid the politics of it all in this post, so I refer to the region as both Iraq and Kurdistan in equal measures. The Kurds don’t want the association with Iraq. Iraqis probably didn’t even know backpackers want to come to cool cities like Erbil!! We even spent new year’s eve in Erbil! 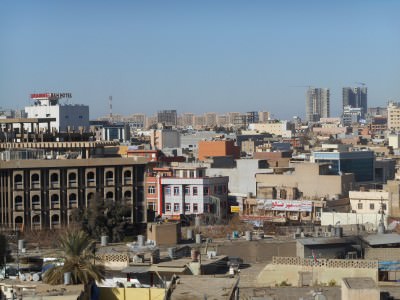 A view down on Erbil in Iraqi Kurdistan.

Getting to Erbil, Kurdistan, Iraq

Erbil has a fantastic state of the art international airport. Arrival and departure into Erbil is smooth, safe and efficient. You won’t experience many queues on the way in or out and as you might have read, getting a visa for this part of Iraq is very simple on arrival at the airport. I flew in and out during my time in Iraq. 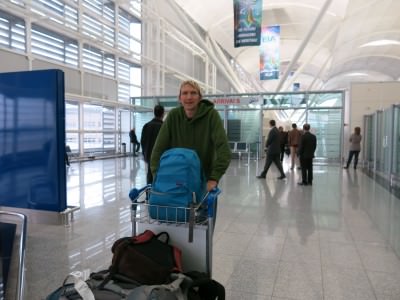 To get to Erbil or Iraq overland, you’ll more than likely have either come from Turkey or Iran. The borders to Syria, Jordan, Kuwait and Saudi Arabia are not really easily accessible these days due to the political situation. Iraq is of course still a war zone. You’ll either be in Duhok (if you came from Turkey) or Sulaymaniyeh (if you came from Iran). From both Duhok and Sulaymaniyeh, head to the Garaj in either city and get a shared taxi. The cost for both journeys will be 15,000 Iraqi Dinars. Erbil is in the middle of Duhok and Sulaymaniyeh, so the time is pretty much the same – not more than 3 hours but usually more than 2 and a half. 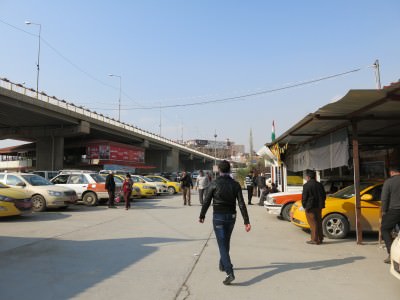 The Garaj in Duhok where you can go overland to Erbil.

Currently not really an option – I’m sure you’ll understand. The sea borders into Iraq are mostly in the south – by Kuwait and Iran at the Gulf. Don’t be sailing your speedboat in and expect it to be easy!

Top 15 Things to see and Do in Erbil, Kurdistan, Iraq

I’ve narrowed this down to 15 for you, I tried to narrow it down to 10, but I was just so impressed by Erbil and excited by it all that I made it a top 15 – you’ll need about 3 days to tick these all off properly so bear that in mind.

This is quite simply a masterpiece, and probably the highlight in terms of major sights in Erbil. The Citadel sits high and proud overlooking the city’s modern and changing skyline. 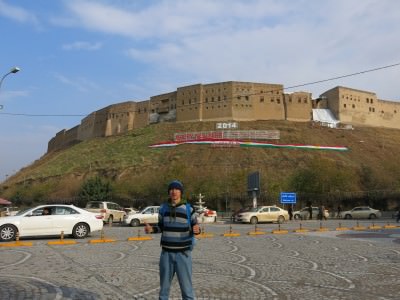 Erbil Citadel – probably the main sight to see in this thriving city.

Erbil Citadel dates back about 8,000 years and apparently is the oldest continuously inhabited place on earth. In reality you can’t miss it when you’re backpacking in Erbil. Entrance is free – just walk around at your leisure and enjoy the views! There’s a textile museum, a shop and a mosque within its walls. 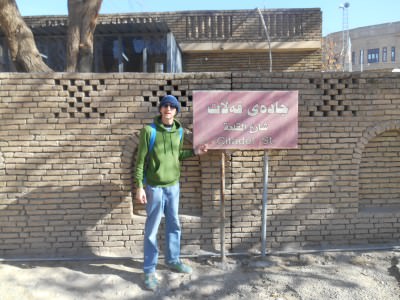 At the foot of the Citadel lies a square with lots of fountains. It’s a really cool and prosperous place to hang out. The locals love it and they mingle here all the time, taking photos, smoking shisha and drinking tea. 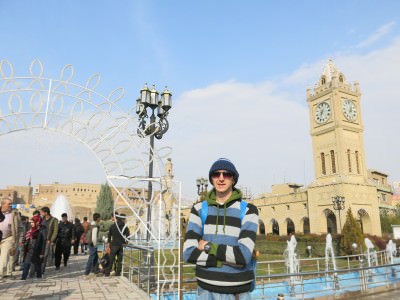 Relaxing in the main square in Erbil, Kurdistan, Iraq.

The Middle East is one of my favourite parts of the world for markets, normally known in this region as Bazaars. Erbil’s Bazaar has undergone an incredible facelift, making it one of the nicest Bazaars in Turkey, Iran and Iraq. 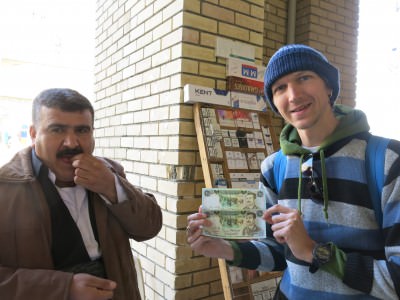 Shopping in Erbil Bazaar and finding some Saddam Hussein banknotes.

I loved walking at leisure round it, talking to the locals, and making a few purchases. It was here that I picked up some totally awesome Iraqi and Kurdish souvenirs, including banknotes, coins, stamps, football scarves and flags. 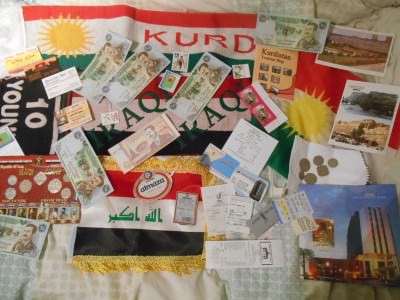 My Iraqi and Kurdish souvenirs – some bought at the market and bazaar in Erbil.

Security is tight here at the Kurdish Parliament and they won’t let tourists inside, nor even to take photos of the outside. We took a few photos from across the road and walked round its perimeter. 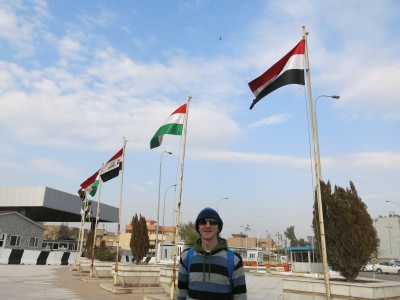 Outside one of the security entrances to the parliament in Erbil, Kurdistan.

Please be discreet though – while this is the Kurdistan government, tensions are still high as we are in Iraq and you should never forget that. My girlfriend cleverly swapped memory cards after we took photos at the parliament – a few soldiers came up to check the cameras and question us and found nothing. 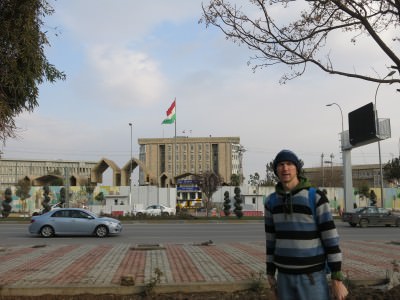 Outside the regional parliament building in Erbil, Kurdistan, Iraq.

This is a massive park in Erbil which is dedicated to the KRG deputy Prime Minister, who was sadly killed in a 2004 suicide bombing. The park itself tries to forget the past and you can relax here. Families and children alike all head here to chill out. Sports, a lake with paddle boats and outdoors cafes and tea shops make this an incredibly relaxing place. 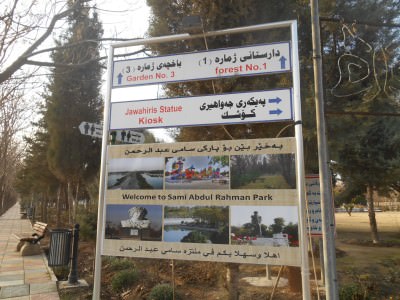 While you’re inside Martyr Sami Abdul-Rahman Park you should try and visit the 2004 Obelisk Memorial which commemorates the 98 people who died in that 2004 suicide bombing. It’s a poignant memorial with all the names written on it, plus the words “Freedom is Not Free” on a stone on the way in. 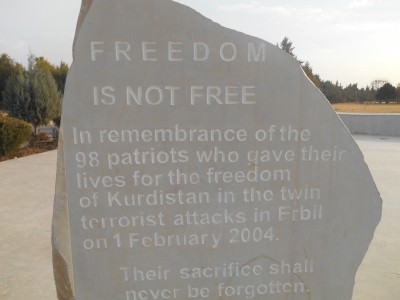 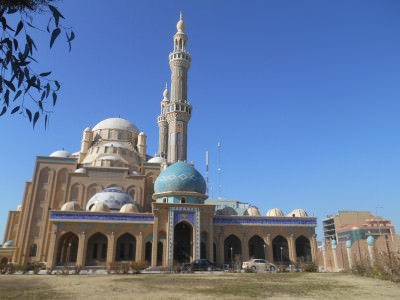 With the Iraq and Mesopotamia area being known as the “cradle of mankind”, you should check out the Erbil Civilisation Museum which is free to enter. Loads of relics and artefacts from the past are here. It’s not really touristy at all and only really 3 rooms but worth a look. I met Goran in there, one of the guides and he later took me round the city. Kurdish people are very welcoming. 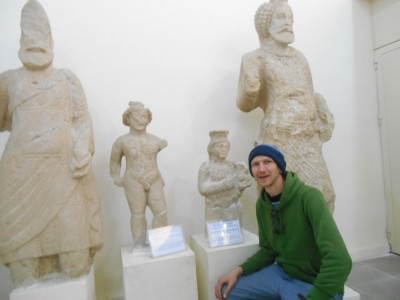 Inside the Erbil Civilisation Museum.

Yet another cool park – this place really does surprise you. An entrance arch which looks similar to Universal Studios in the USA and a cool relaxing place to walk round including an outdoor path of heroes and some almost Roman looking pavilions and theatres. 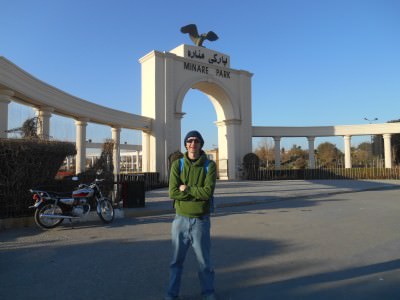 This is an old minaret from a Mosque which is no longer there – the minaret remains and is protected. The top of it has been damaged but the Minaret dates back to 1190 and is 36 metres tall. It’s inside Minare Park, after the walk past the heroes head busts. 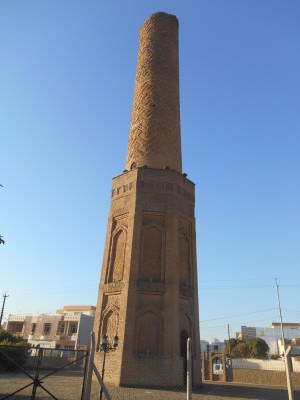 The minaret inside Minare Park, Erbil.

Yet another cool park in Erbil, Shanidar Park is opposite Minare Park and features a modern, working cable car ride which offers views of the city. Inside Shanidar Park is also a really cool arts centre – this is a rare place to pick up postcards and posters from Iraq. Something quite rare and unique indeed. 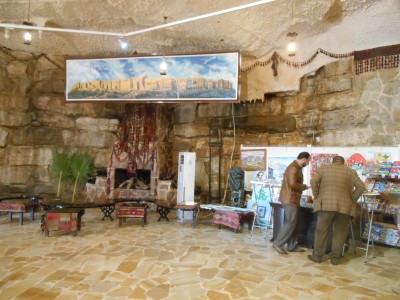 The park also offers quality views over the city of Erbil from on top of the arts centre. 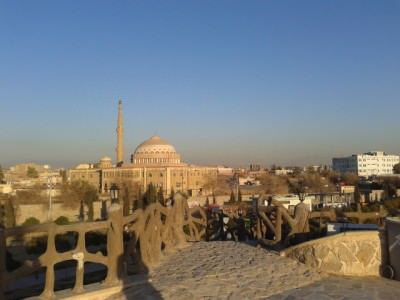 Thanks to my local mate Goran for taking me there. 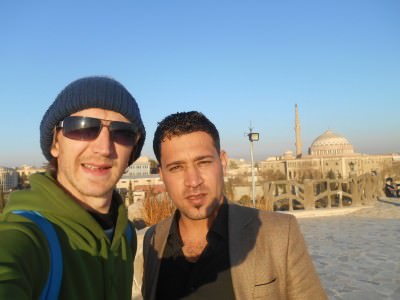 WIth my local mate Goran who is big into archaelogy. Thanks for the tour Goran!

If you’ve followed my adventures you’ll know that I love checking out football stadiums when I travel. Erbil has an excellent football stadium, this one hosted the unofficial World Cup Final (the VIVA World Cup). Kurdistan were the winners when the final was hosted here in 2012. 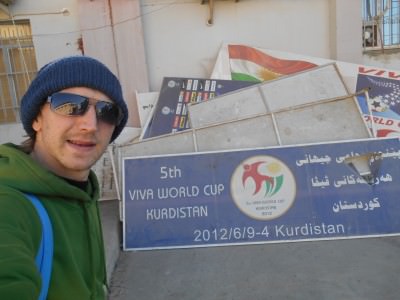 The 5th VIVA World Cup was held in Kurdistan, with Erbil hosting the final.

I was lucky to sneak onto the pitch inside the stadium un-noticed and got my photo with two of the players, including the captain and goalkeeper. 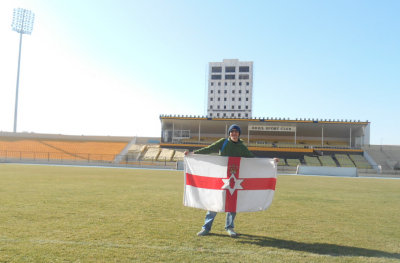 Standing on the pitch that hosted the 2012 VIVA World Cup Final in Erbil, Kurdistan, Iraq.

If you’ve already been to the Erbil Bazaar and want to check out another market, the outdoor market is slightly different. It’s more open and features a long road of endless stalls selling everything from football shirts to donuts to fruit to deodorant to toys to Kurdish political stuff. It’s just behind the main square. 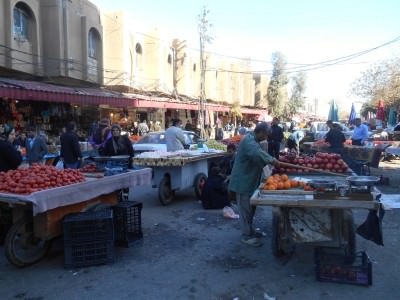 The main square where the fountains are has loads of tea houses and they are cheap enough. It’s only 500 Iraqi Dinars for a cup of tea, which is about 25 pence (UK Sterling). This is not only a cool place to drink tea and chill, but I got talking to lots of local guys here!! It’s very male dominated though, local females don’t go here, but foreigners will be fine. I totally loved it! 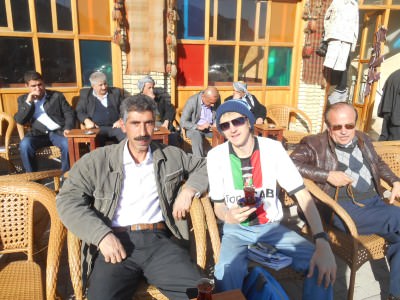 Drinking tea with the locals in the main square in Erbil, Kurdistan, Iraq.

This is a full on four or five star hotel in Erbil and is top notch. Of course I couldn’t afford to stay there, but you can pop in for a look around and a beer. There are two security checks on the way in and a cool bar on the ground floor. You’ll also see USA, UK, Iraq and Kurdistan flags flying next to each other here. A rare yet pleasing sight. 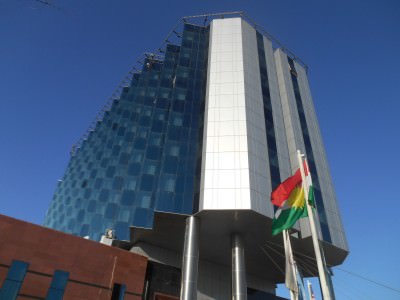 Erbil International Hotel – worth a visit just to have a beer.

OK folks so that’s just a top 15, I haven’t included quite a few things I know – this was my personal top 15 – the Kurdish Textile Museum was closed when I was there, there’s also the Antikqala (Antique place) and loads of other Mosques, plus another museum. I’ll detail Ainkawa in a separate post, in case you wonder why I haven’t included churches or the bar district on here – it’s in a separate part of the city. 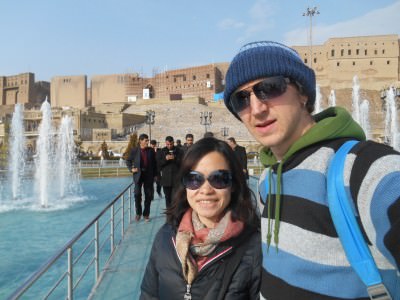 Panny and I in central Erbil ticking off our top 15 things to see and do.

Safe travels! Erbil is a cool spot to check out! And also backpacking in Iraq is a lot easier and more rewarding than you will ever know. Here are some of my videos, you can view over 100 of my Iraq videos on my channel:

18 thoughts on “Top 15 Things to See and Do in Erbil, Kurdistan, Iraq”