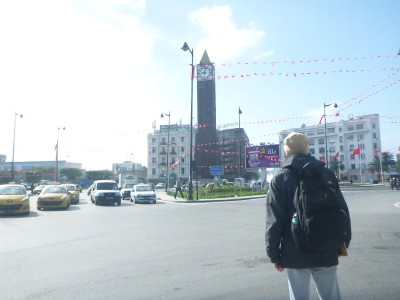 Backpacking in Tunisia: Top Sights in Tunis, the capital

To celebrate my 100th country I toured the north African country of Tunisia. We started off in the capital city of Tunis, where we flew into. We stayed in a few different parts of the city including with Ayoub and Dhia also toured Carthage and Sidi Bou Said, which are slightly further north. 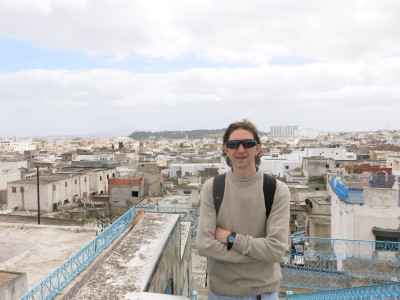 To get your bearings in Tunis you will want to head to the downtown area, and specifically Avenue Habib Bourguiba. This avenue is the central street in Tunis and from here you can walk to most of the main sights. We felt the city was a bit grubby, dirty and lacking organisation however it is definitely a cool city and if you’re in Tunisia, this is the pumping heart of the country’s business acumen so it deserves a few days. Also, sadly a few days before our visit there was a massacre at the famous Bardo Museum in Tunis, so out of respect we didn’t go into the museum but I’ve put it in this top 10. 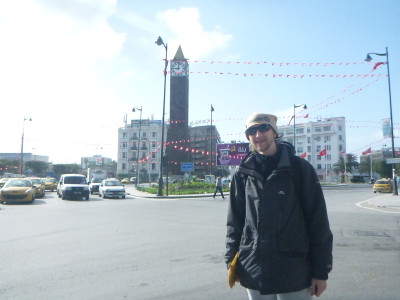 Getting Around Tunis
The public transport networks in Tunis are quite simply atrocious, a complete shambles and one of the worst we have ever seen. We normally bought a ticket for the trams and trains but they are never checked. The trains are irregular and infrequent, dirty and chaotic. But it’s all part of the Tunis experience! 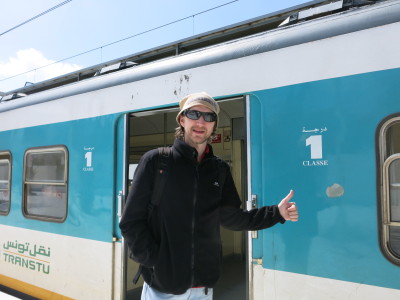 Getting a train in Tunis

Journeys on the Metro are about 15 – 20 pence, and the trains out to Sidi Bou Said and Carthage around £1 one way. We didn’t use buses. Taxis are a decent option but agree a price first. 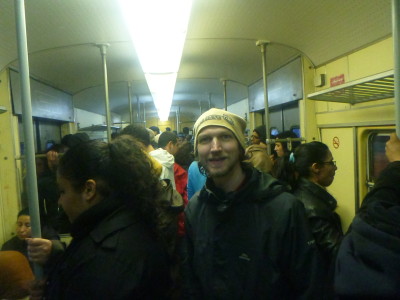 On the Tram in Tunis

1. Clock Tower/Plaza de 7 Noviembra 1987
Long before the 2011 revolution sat this clock tower. It seems to tower over the city’s main street. It looks directly down towards the Medina and the Arc de Triomph along the Avenue Habib Bourguiba. The tourist information office is also here. 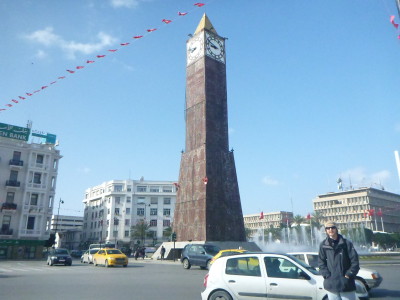 2. The Medina
As well as my other backpacking stories from Tunisian cities, the Medina’s are often the highlight of your visits to each city and here in Tunis, the Medina is the largest we saw in Tunisia. 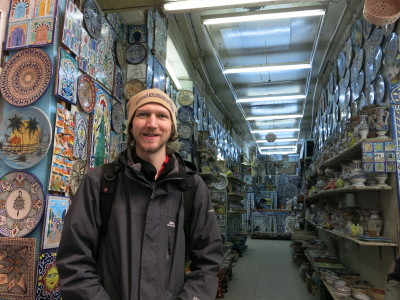 Inside the Medina of Tunis

You can get lost and you can find some good spots for a cup of tea as well as shop for souvenirs. 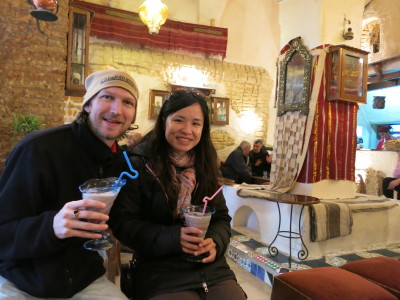 Having a drink in the Medina of Tunis 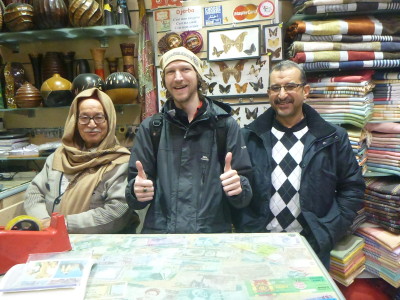 3. Zaytouna Mosque
The Zaytouna Mosque is probably the most important Mosque in Tunis and it is in the heart of the Medina. As a non-Muslim when we went viewing was closed (perhaps in the wake of the massacre). 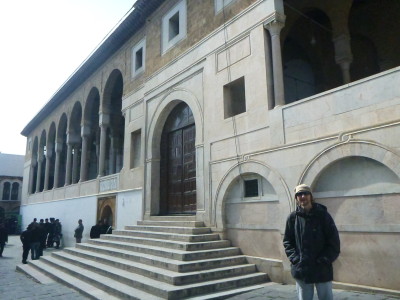 Outside the marvellous Zaytouna Mosque in Tunis.

But if you head to one of the shops inside the Medina, it has an upstairs which offers a viewpoint of the city and into the courtyard. You’ll have to look around for it, but it’s worth it for the views. 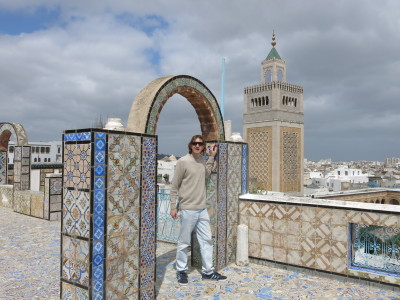 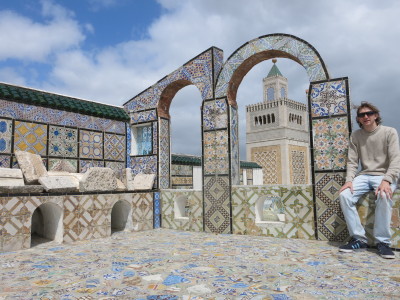 A view of the Zaytouna Mosque in Tunis

4. Independence Square
I did find a deep irony in the fact that the French Embassy and a French Cathedral sit at Independence Square in Tunis. But maybe that’s the point. This is Tunisian land now, it ain’t French. The Square features a statue of famous poet Ibn Khaldoun. 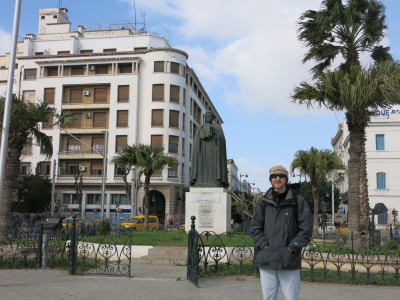 Outside the Ibn Khaldoun statue at Independence Square

5. Central Market
Aside from the mazy Medina, sits a more raw and open plan Central Market. This is one you won’t get lost it. You can buy cheap fish, vegetables, meat etc. and it’s just opposite the Post office 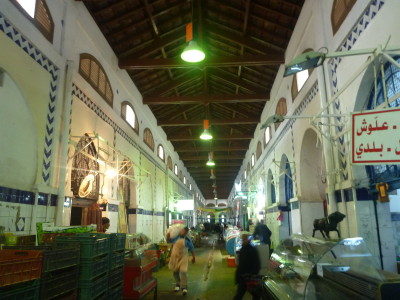 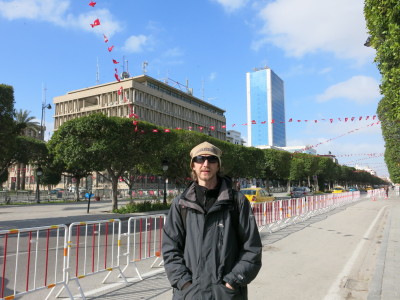 Backpacking through Tunis, the capital city on Avenue Habib Bourguiba

7. Victory Arch
Just before the main entrance to the Medina sits this Victory Arch. Similar to the Arc de Triomphs I have seen before in Pyongyang North Korea, Vientiane Laos and Paris France. 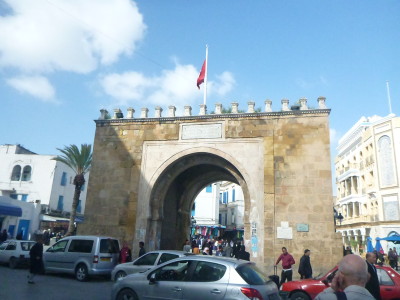 The Victory Arch in Tunis, Tunisia

8. Catholic Cathedral
Despite Tunisia’s strong position as an Islamic country, representation of the French times still remains and often sits proudly and un-noticed. The most obvious reminder in the downtown area is the Catholic Cathedral which is still in use by the local Christian population. 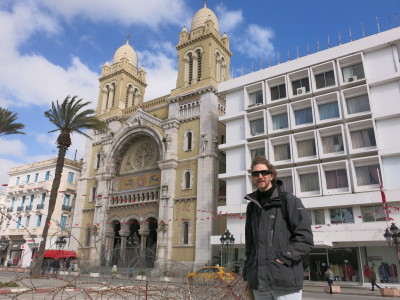 The Catholic Cathedral a reminder of the French rule here, it’s still in use.

9. Bardo Museum
About a week before our visit to Tunis, Islamic extremists stormed into the famous Bardo Museum and killed dead lots of tourists. It was a tragedy that struck the nation badly and we decided not to go inside. Security had been increased as a result and we went up to the gates to read the tribute to those killed. 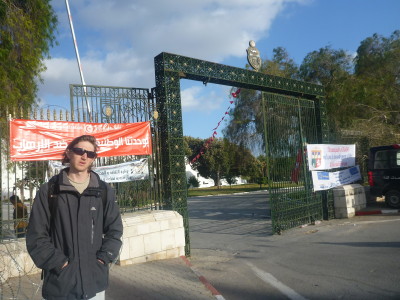 Bardo Museum, Tunis – secene of the terrorist attack in 2015

10. Olympic City Mosque
All the above 9 sights are kind of obvious things to see and do when backpacking in Tunis, so I’m putting another Mosque in here, but a local one. 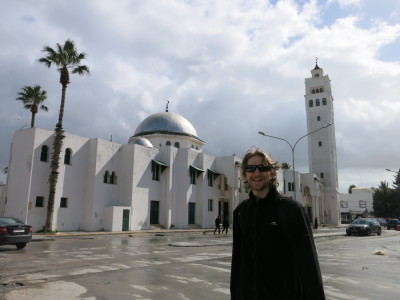 When we stayed locally with Ayoub, we visited the Olympic City Mosque which is in an area bereft of tourists so it feels like a different world here. 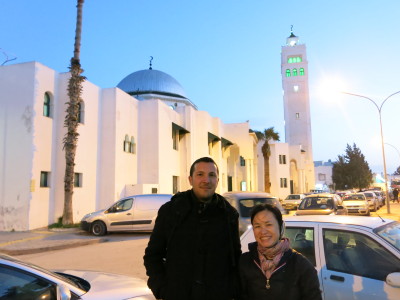 My thanks to Ayoub and Dhia for showing us their capital city which was just amazing to see. Tunis is a tad chaotic, disorganised and dirty though – a thought that does linger as you roam the streets. And please please if you ever decide to go to Tunis or Tunisia, AVOID their national air carrier Tunis Air at all costs – they are the most disorganised airline in the world. They were rude to us, lost my bag and have showed the worst customer service I have ever seen. 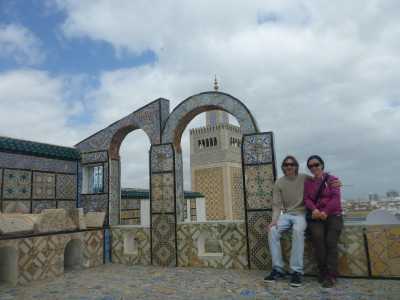 Here are some videos I made in Tunis during my time backpacking in Tunisia:

4 thoughts on “Backpacking in Tunisia: Top 10 Sights in Tunis, the Capital”