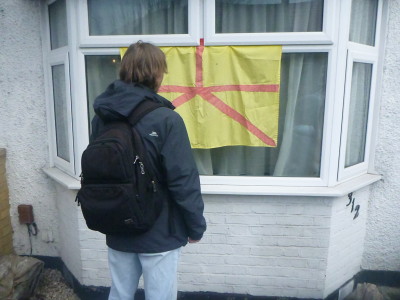 Backpacking in Austenasia: Top 8 Sights in Wrythe, the Capital

On one of my recent adventures I became the first tourist to visit Wrythe, Austenasia’s capital. Having crossed the border from the town of Carshalton in London, England I was greeted by Emperor Jonathan I and given a guided tour of the capital. Here are the top 8 sights in Wrythe, capital of the Empire of Austenasia.

Looking across the border into Wrythe, Austenasia from the town of Carshalton, England

1. England – Austenasia Border Crossing
The border crossing between England and Austenasia is bizarre, memorable and almost un-noticeable. I crossed from the English town of Carshalton in London into Wrythe, capital of Austenasia. 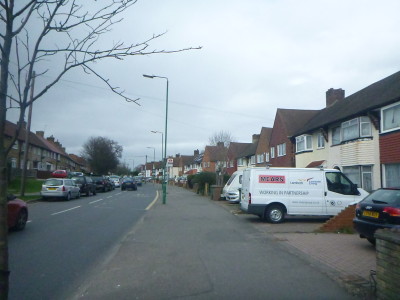 Walking on Green Wrythe Lane in Carshalton, England about to cross the border into Wrythe, Austenasia

The crossing is done on foot and is from the street footpath of Green Wrythe Lane across a bricked line into the driveway of number 312 Green Wrythe Lane. The terraced house that is the capital of Austenasia. It’s a crossing from a footpath into a driveway. The border is not manned, there are no visas required, no passport control, no passport stamps and no bag checks. You do however need to ensure you have organised your visit by contacting the Emperor of Austenasia and arranging your tour times and dates in advance. 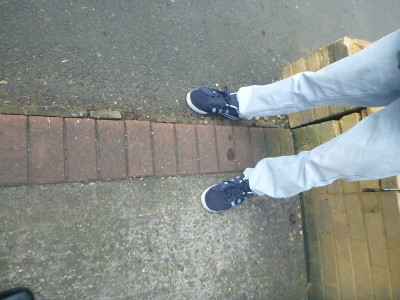 Crossing the actual border between England and Wrythe in Austenasia. My right foot here is in England/the UK, my left foot is in Wrythe, Austenasia.

2. The Welcome to Austenasia Sign
Although you have already entered the Empire of Austenasia by stepping into the driveway at Wrythe (the nation’s capital), you don’t notice the Welcome to Austenasia sign until you reach the front door of the enclosed part of Wrythe. It’s a small sign welcoming you to the country and explaining the rules. As mentioned you’ll need to be here as part of an organised tour (through contacting the Austenasian government) so the Empirial Family will be expecting you. Ring the bell by the right of the door. On my visit, it was the Emperor himself, Jonathan I who opened the door to let me in. 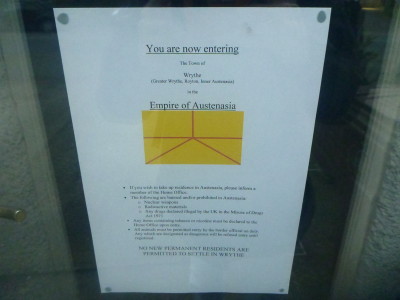 3. Parliament Hall
Parliament Hall is the largest room in Wrythe. It is basically the lounge of the house and includes a library, a television and more significantly the chair where the country was formed back in 2008, which is at the rear of the hall. Government meetings are held partly in Parliament Hall but also via Skype. 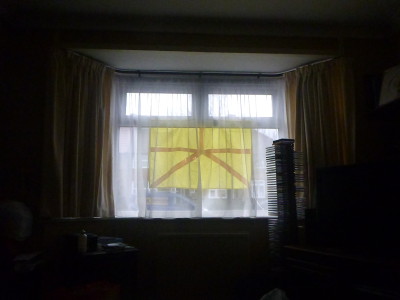 When you look out the window back onto the street and the country of England, you can see the Austenasian flag. 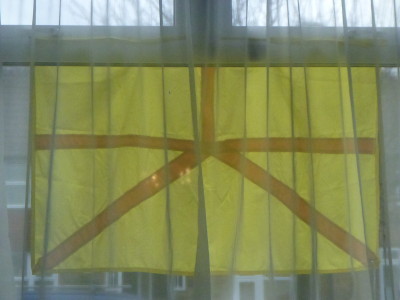 The Austenasian Flag viewed from Parliament Hall in Wrythe.

4. Independence Chair/The Emperor’s Chair
Similarly to the time I visited Parnu in Estonia, there is a marker place to where Austenasia was actually formed. On this very chair back in 2008, was where the letter of independence was typed up and hence this chair marks the exact spot where the Empire of Austenasia became a country and seceded from the United Kingdom. It can be called Independence Chair or The Emperor’s Chair. 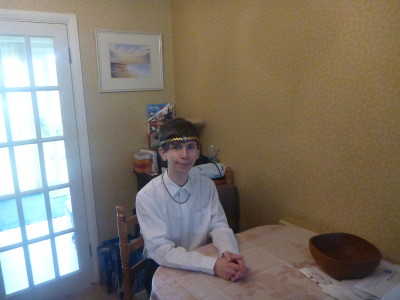 While it’s Jonathan the First’s throne and seat, as the only tourist, I was able to sit on Independence Chair and write some notes up. 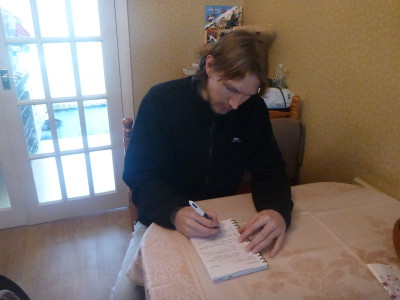 Becoming the first tourist to sit on Parliament Chair in Austenasia 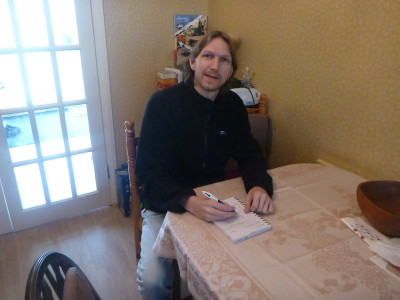 In the Emperor’s Chair (and Independence Chair) for a few minutes! 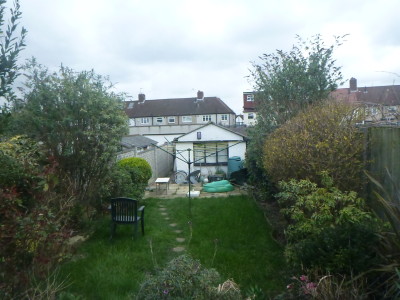 It’s basically the back garden, but also contains vantage points over three different sections of fence into the neighbouring country of England/UK. 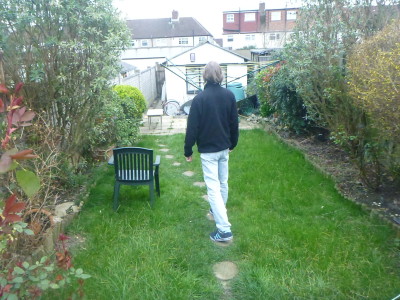 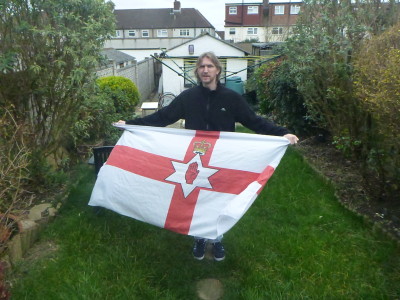 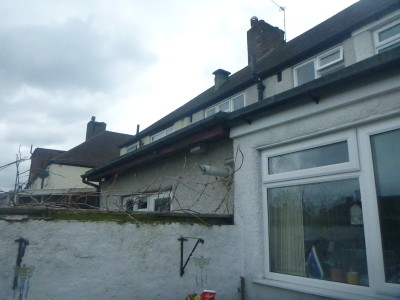 View across the border into England from Wrythe, Austenasia

6. The Orange Pyramid (Austenasia’s National Monument)
I was surprised to learn that Austenasia’s capital Wrythe has a national monument. This is the only real touristy monument in the capital, which was unfortunately destroyed by wind erosion a few years back. Regrettably I didn’t get to see the original versions of the monument, but images of them can be found below: 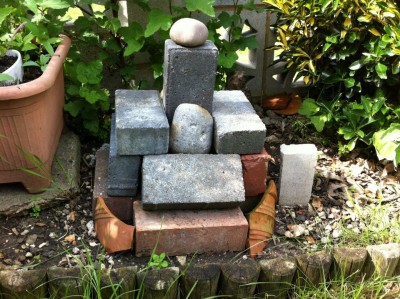 The original National Monument of Austenasia, known as Orange Pyramid.

It was built as a monument to cultural diversity originally in April 2011 but almost completely rebuilt in May 2012 due to the collapse of the original structure resulting from a lack of structural integrity. 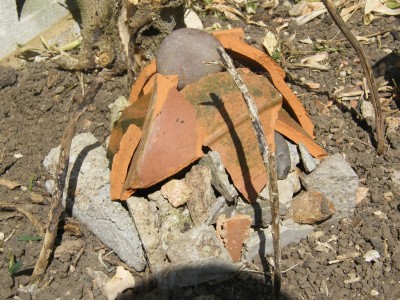 Orange Pyramid Austenasia after the great wind of 2012

It has been left the way it was after the great wind of 2012, making it also Wrythe’s only “ruined site”. The Emperor says there are plans to build a new national monument at some point. However as of March 2015, the monument has been covered over by a growth of plants and is a shadow of its former self. 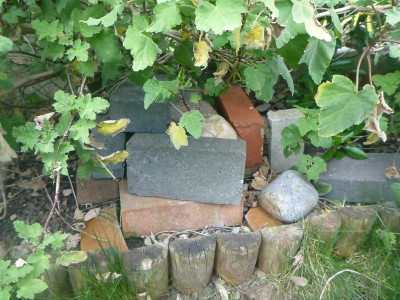 Orange Pyramid as it stands in March 2015 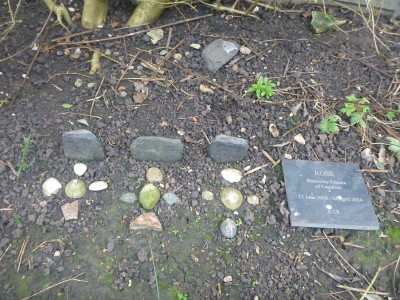 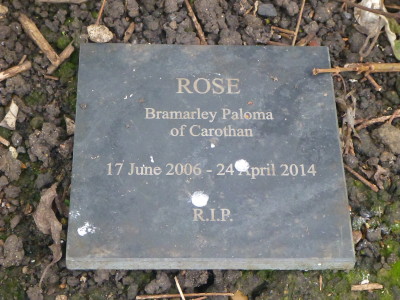 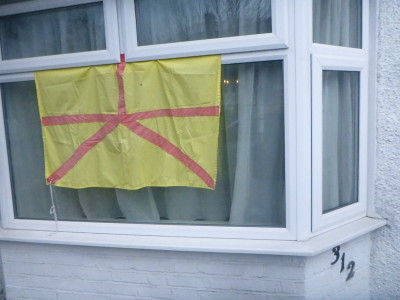 The flying of the Austenasia Flag in Wrythe

The flag also makes a good photo opportunity, so any tourists heading there, take the flag of your country with you and get your photo next to it! 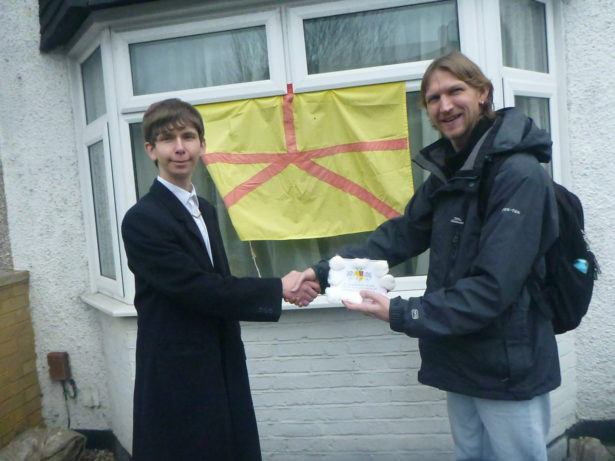 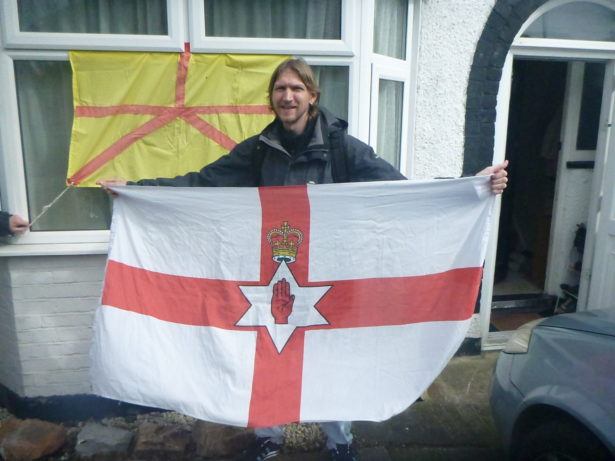 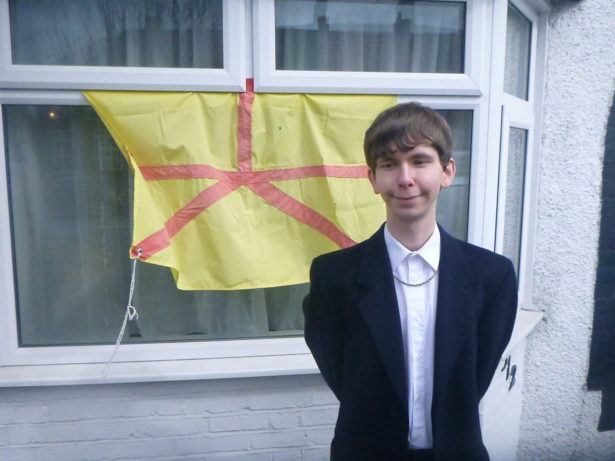 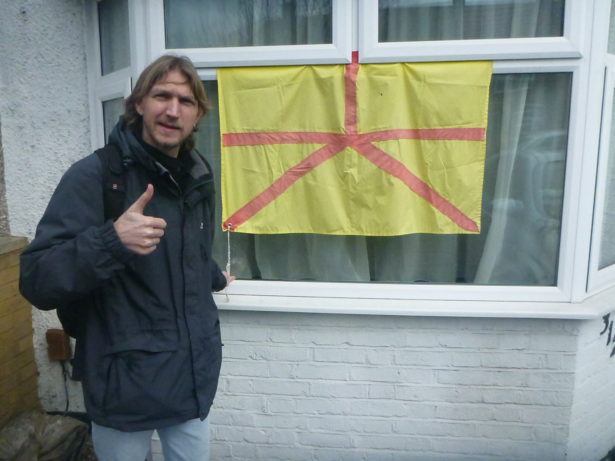 Those are the top 8 sights currently in Wrythe, Austenasia. The country has other towns scattered across the globe, the largest town is actually New Richmond which borders the USA. Sadly there is no souvenir shop or gift shop yet in Wrythe. But I sincerely hope it’s not too long until you can buy Austenasia flags, postcards, fridge magnets, pens, iron on badges, stamps and coins. A visa for your passport would also be nice.

In the meantime, Emperor Jonathan the First (the longest reigning monarch of the nation) welcomes e-mails and also tourists on selected days. I was the first tourist to visit the country, I would love to know who will be the second! 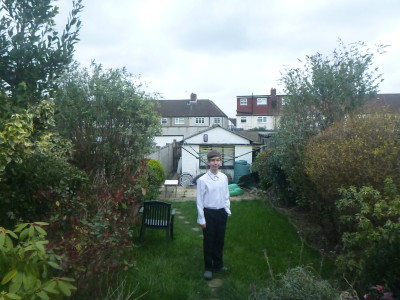 Jonathan the First: Emperor of Austenasia.

Also – the nearest pub to Wrythe in Austenasia is the Racehorse Pub in Carshalton in England. Jonathan is probably the first person I’ve met that crosses the border into another country when he wants to visit what is his “local pub”!

Here are some videos from my time backpacking my way through the sights of this tiny capital, Wrythe in Austenasia:

16 thoughts on “Backpacking in Austenasia: Top 8 Sights in Wrythe, the Capital”