“In Camden Town, I’ll meet you down by the Underground” – Suggs 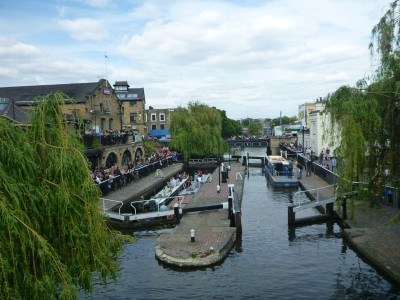 I want to get back to writing more stuff like this. We all know the “Top 5 this” and “Top 8 that” posts are good for combining the key sights together into one article, bringing in page visits and also for SEO purposes. However those types of posts are tailored for giving advice and tips and collectively they’re a cool record of my travels but they lack passion and personality. Sometimes, I just think “fuck it, I’m just going to write about what I did”! And if it helps other travellers out in any way then it is all good. But yeah I was a story teller long before I was a business backpacker, so back to basics today 😉 You don’t have to read it, but I do enjoy writing it! 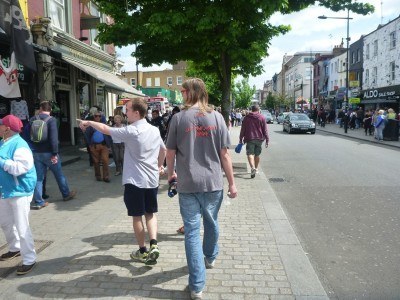 Back before Don’t Stop Living existed, back when I lived in London I used to love exploring different nooks and crannies of the English capital city. After a bit of a breakdown while staying in Bournemouth, I was reunited with my friends James and the famous “Millwall Neil” yet again in May 2015 so we decided on a day out with a difference. It was no booze up my friends. I’d decided to knock the alcohol on the head for 12 weeks (I’m now 8 weeks into that as of tonight!), I decided on a healthier diet and less crazy days. After a bus from Bournemouth to London, I met Neil at Chalk Farm and we planned a day out with a difference – Primrose Hill Market, Camden Town, the Canals of London, Cycling from Bank to Chalk Farm and a visit to St. Martin’s College! I was drinking alcohol free Beck’s as well! Here’s what we got up to. 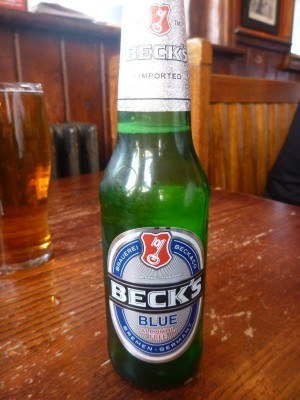 1. Primrose Hill Festival
First up we headed for some street food at the Primrose Hill Festival which was really lively with food markets, kiddies amusements and a dog show. It reminded me a bit of Neil and I on Australia Day in Parramatta in 2010. We were five years older, no less wiser. 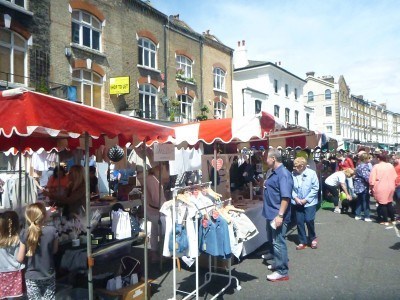 The markets at Primrose Hill, London

It was a hot Sunday and a one day event here at Primrose Hill in London. There were loads of food stalls. I grabbed an English pork sausage roll, Neil grabbed some Paella and we ate relaxing in the park with a view over London. James joined us and we decided to hit up Camden Town. Thousands of people attended the mini festival. 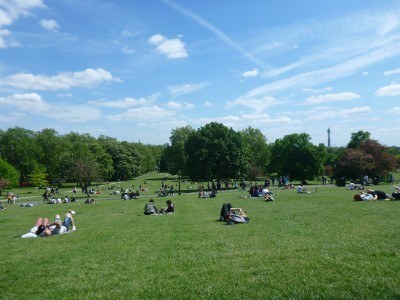 Lovely day at the park in Primrose Hill, London

2. Backpacking in Camden Town
Camden Town is a hippy place and I’ve been a few times. I’ve always loved it. I’ve watched rock gigs here in the Barfly and Koko down the years, I’ve had some good days out in the nearest thing London gets to Christiania, the hippy Freetown which borders Denmark. 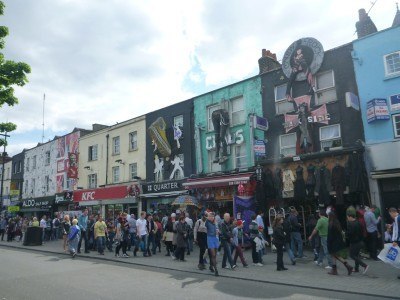 I like the vibe in hippy Camden. By day it rocks a hippy sunshine beat and you can smell the wafting marijuana in the air. At night it pumps out a rock n roll beat with the odd bit of sleaze out on the streets. If you have been to Camden at night, you will know that the best London escorts available come out here at night and you can feel the sexy drugged up vibe in the air! But we were here to enjoy the sunshine and chill out! 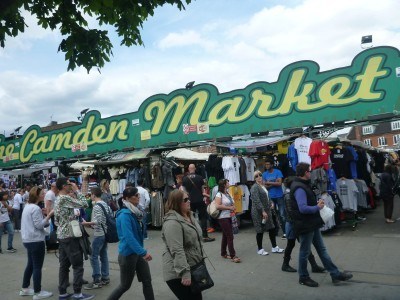 By day we simply toured the market area on foot, browsed in a few hippy shops and markets and made our way through the busy streets. It was a Sunday – it’s important to note that the London tube closes at Camden Town (and sometimes Mornington Crescent too) on Sundays due to the traffic. Sundays are the most popular day to go to Camden. 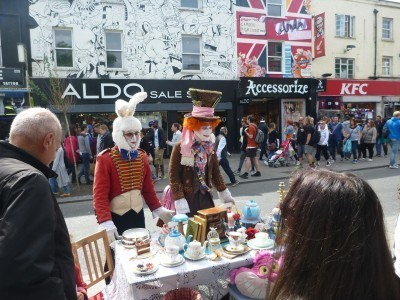 3. Canals of London
On our day out in the city we toured the canals of London. You might be surprised to learn that London has canals. They are actually much nicer to the ones in Venice and Amsterdam in my opinion. We walked part of the way and then cycled some of the way. 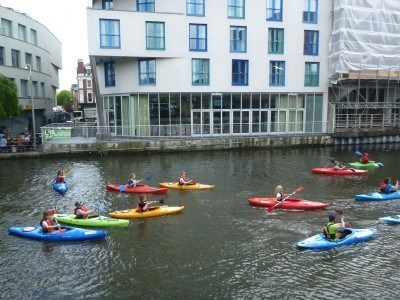 Kayakers on the canals in London 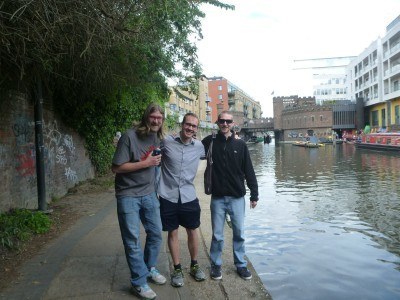 James, Neil and I touring the canals of London

Our walk took us past Camden Lock, some kayakers and two Wetherspoons pubs (which we resisted). We saw Hampstead Road Lock and also headed through a busy food market. Not quite the engineering gem as the Panama Canal (A man, a plan, a canal, Panama) but a really cool place to walk along. 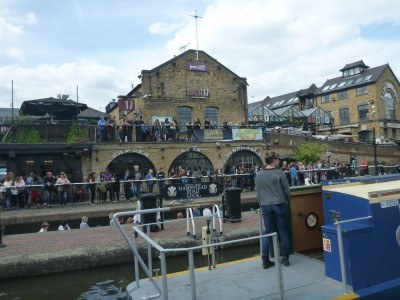 The canals of London

4. Cycling from Old Street to Chalk Farm
We headed to collect a friend’s bike from a posh Japanese shop in Old Street. James and I grabbed a bottle of Dr. Pepper each and the three of us decided to hire bikes and cycle it back to Chalk Farm. 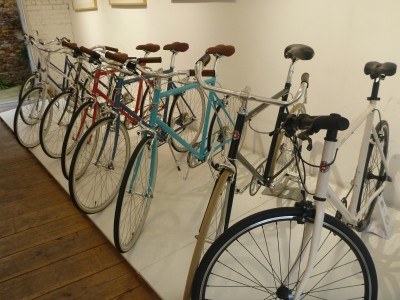 The bikes to be hired in London are nicknamed “Boris bikes” after the Lord Mayor Boris Johnson brought them into existence a few years ago. 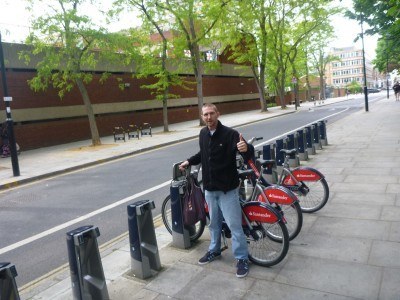 What I love about these “Boris bikes”  is they are FREE for the first half an hour and only £2 for the first 24 hours. That’s a bargain and a great way to see London is on bike.

5. Muriel Street
On the cycle back to Chalk Farm from Old Street we passed a ton of notable places. There was Pentonville Road, about 4 streets on the Monopoly Board and then there was Muriel Street! Named after my Mum of course. I actually totally forgot we visited Muriel Street until I started writing this post and the memory came back. 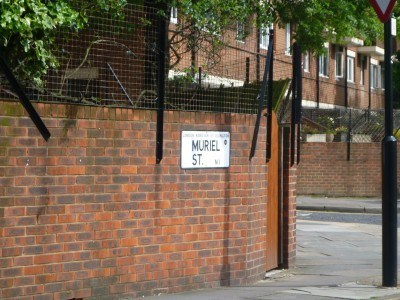 “She came from Greece she had a thirst for knowledge, she studied sculpture at St. Martin’s College” – Jarvis Cocker (again) 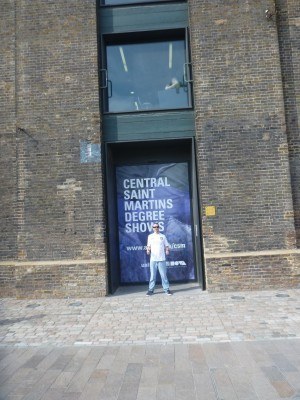 Now I was actually outside St. Martin’s College – we went in for a quick look, drank some water and James and Neil asked me for a rendition of the Pulp song, 20 years on.

Chilling on the grass at St. Martin’s College

7. Pub for Non-Alcoholic Beck’s
We heard there was football on so Neil, James and I decided to go down the pub. I opted for a non alcoholic Beck’s which was ridiculously more expensive than their pints of real beer. Ah well. At least I was staying alcohol free for 12 weeks. We watched the Arsenal v. Man United match which finished 1-1 and I remarked that next season I’d be watching AFC Bournemouth in the Premier League. 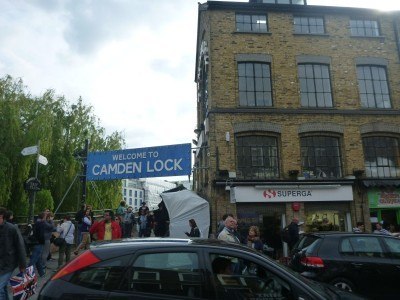 Back to a pub in Camden for a beer (non alcoholic)

Food wise we opted for greasy kebabs and I headed back to Neil’s to sleep after a long day. This was a great day out and hopefully the first of many more unusual lads days out. We used to drink 12 pints a day and visit 6 rock clubs. Now we tour posh bike shops, drink alcohol free beer and cycle through London. 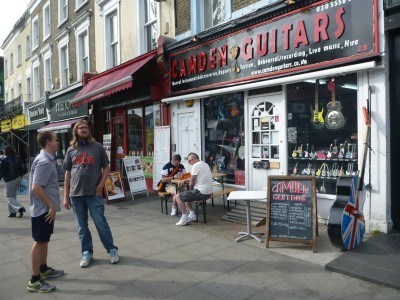 James and Millwall Neil outside a guitar shop in Camden Town

And that was that. I was knackered so had a decent night sleep, which reminded me again of the Beatles song I’m Only Sleeping and even weirder as Suggs did a cover version of that and I toured Abbey Road the next day! Neil and I had a meal that night and I headed to Kuwait. I hope to see Neil and James real soon as they are top mates and I miss them. Thanks to Neil, JJ and James for this quirky day out in London. We end as we began with Suggs.

Here are some videos from the day out: