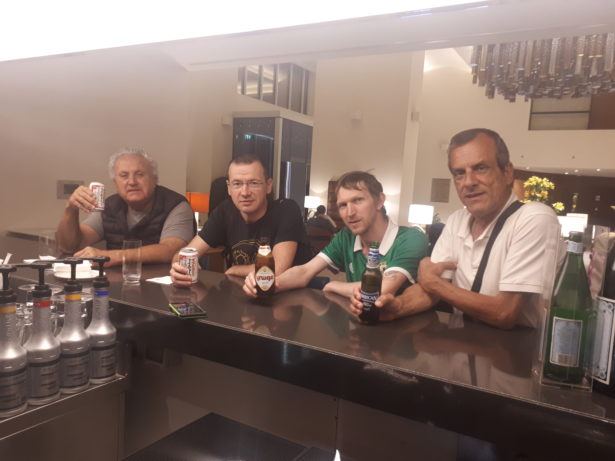 While backpacking in Saudi Arabia recently, I realised it was one of the rare countries I visited where I didn’t consume any alcohol. This is due to the strict law – alcohol is simply forbidden here and will result in imprisonment, fines or expulsion. There are so many strict rules in Saudi Arabia with no alcohol, no pork and no gambling. It makes it hard for companies such as Budweiser, Danepak and Online Casino Bluebook to make money here, or any impact. However, Budweiser, are present as I found out! Did you hear the one about the Mexican, the Portuguese Guy, the Ukrainian and the travelling Northern Irishman who walked into a bar in Saudi Arabia? 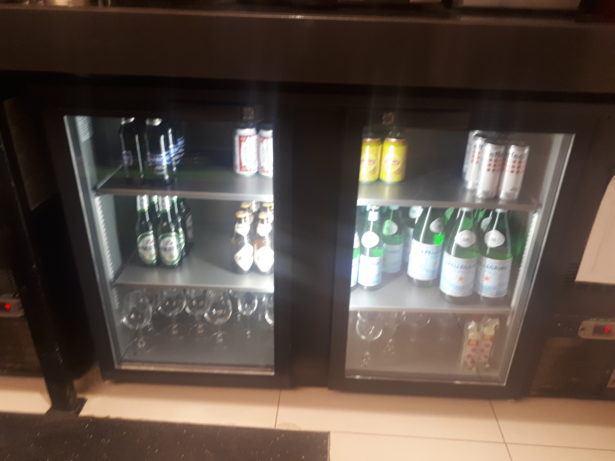 However this was not the first dry country for me, there were a few other countries/regions I backpacked without indulging into the booze, and as far as I remember these were:

And these remote places, I did have a beer in:
Adammia – I tried the local wine from the Adammic Winery.
Algeria – I had a local Algerian beer here.
Antarctica – On our last night near the Polish Base on King George Island, we had a beer by the rocks.
Bahrain – I had one night on the rip in this city, visiting three bars.
Bangladesh – I only visited one bar and had a single beer here during a one week stint in the country.
Don’t Stop Living – I often consume beer while visiting the world’s only travel blog country.
Iraq – I actually had beer in three different cities here – Duhok, Sulaymaniyeh and Erbil, even compiling a top 4 bars in the Iraqi Kurdistan part.
Jordan – Despite bordering Saudi Arabia and being very strict, alcohol is widely available and I especially loved the 8% proof Petra Beer.
Ladonia – I cracked open a beer in the capital, Nimis, but my backpacking buddy Daniel was driving that day.
Palestine – Alcohol is widely available in Palestine, they even brew their own Taybeh beer which is impressive. I attended a beer festival there.
Uzupis – I popped into Spunka Bar and tried some imported Lithuanian beer on tap. 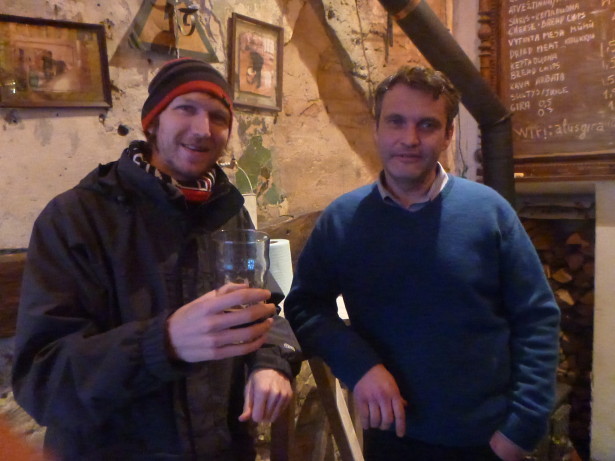 1.Budweiser 0%
My first beer in the country was on my first evening there – I was out with my tour friends Albert and Eduardo and we went to the local diner – TGI Friday’s. In here, I spied a zero per cent Budweiser so I nabbed it, and ate it down with a dish of cheesey nachos. Not too cultured here into Saudi Arabia, but hey I loved it! 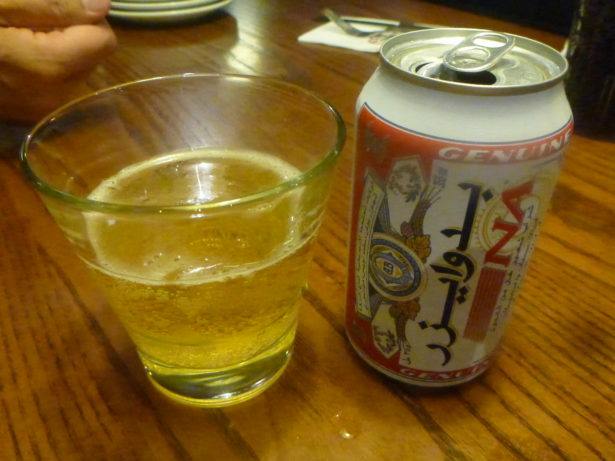 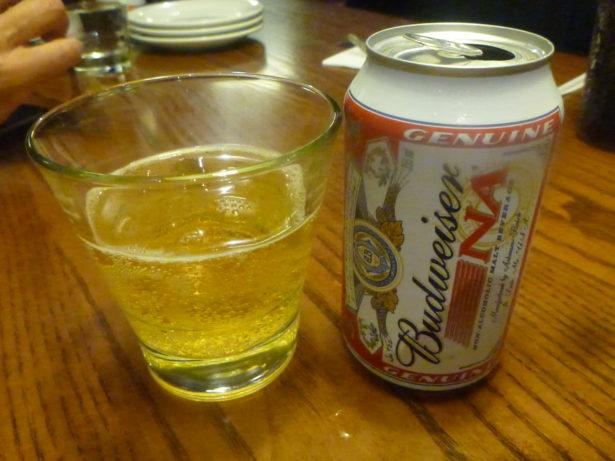 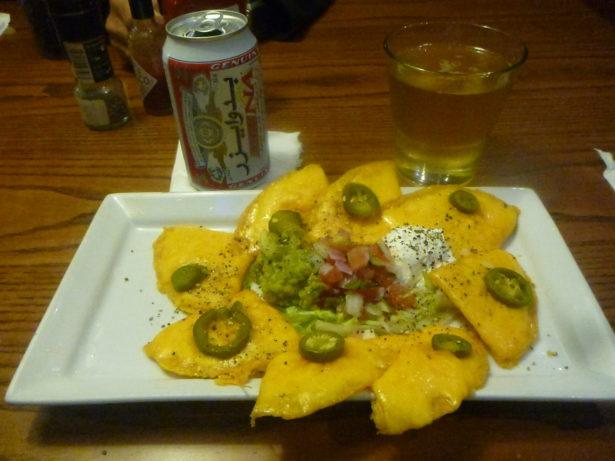 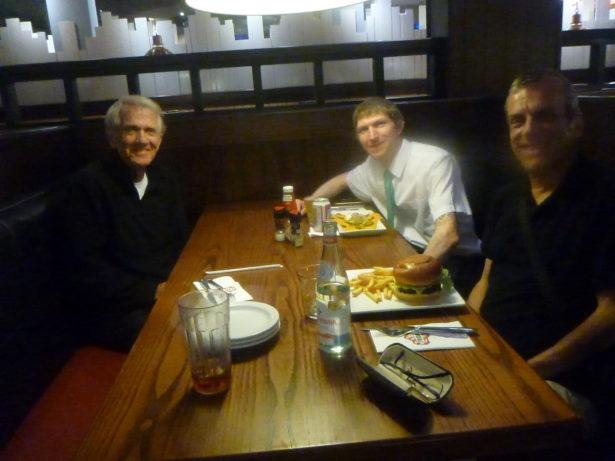 I sipped an ice cold Holsten pomegranate while watching the Manchester City v. Liverpool Champions League match down the pub. This was beer, pub, pizza, football. Except my pepperoni pizza was made of beef and the Holsten was non alcoholic but it was delicious. 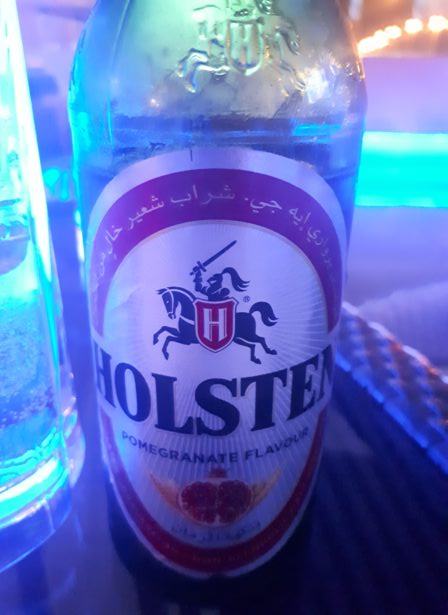 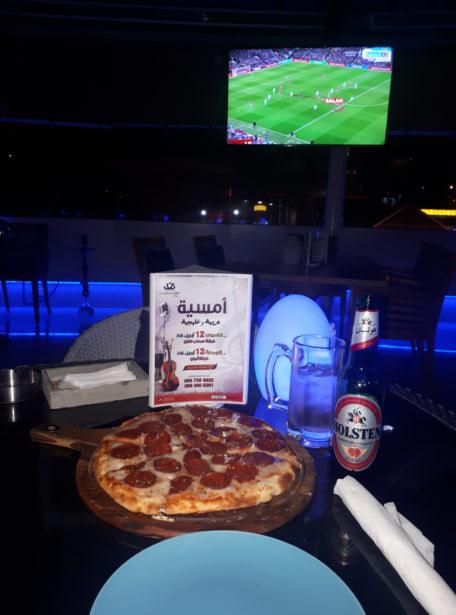 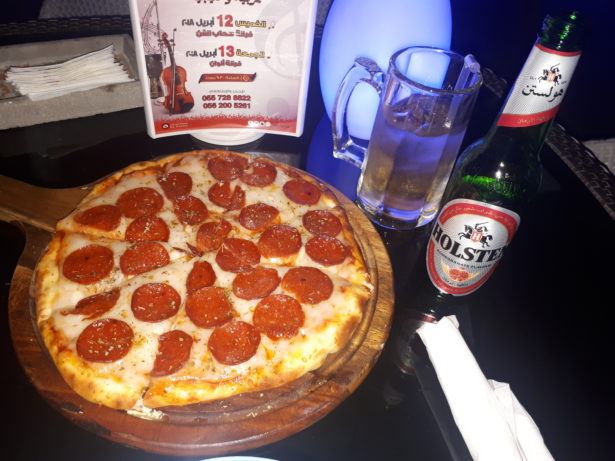 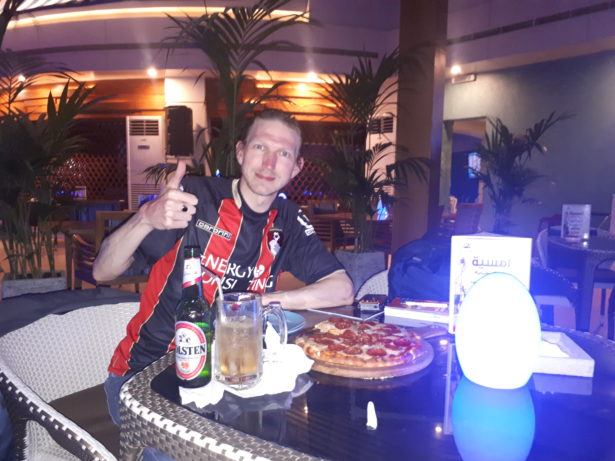 After the Holsten pomegranate, I decided to try the classic for the second half of the match. This was actually not as nice, the lack of fruit and blandness was definitely not something I was craving. 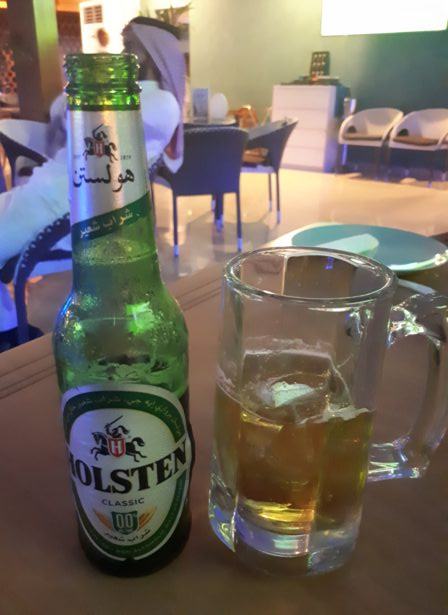 Our first full night together as a group of six, and after the first day of sightseeing and the Hotel Show in Jeddah, we went for an incredible fish meal in Jeddah – this (along with the camel fried rice) was my favourite meal in my time backpacking Saudi Arabia. This was also the cheapest beer in a bar that I had, as it was 7 Riyals, however, the label on it said 3 Riyals, so we knew that from the shop it would have been less than half that price. However, this was delicious and eclipsed the Holsten classic and the Budweiser. The restaurants was Saedi Fish Restaurant. 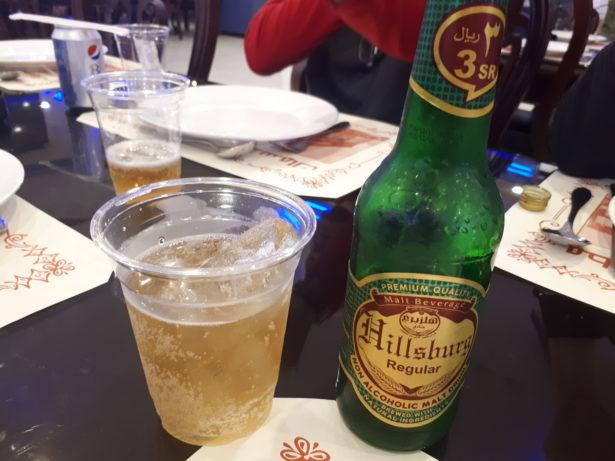 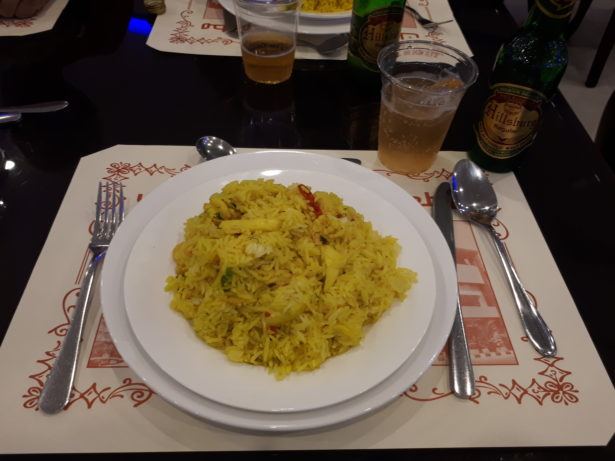 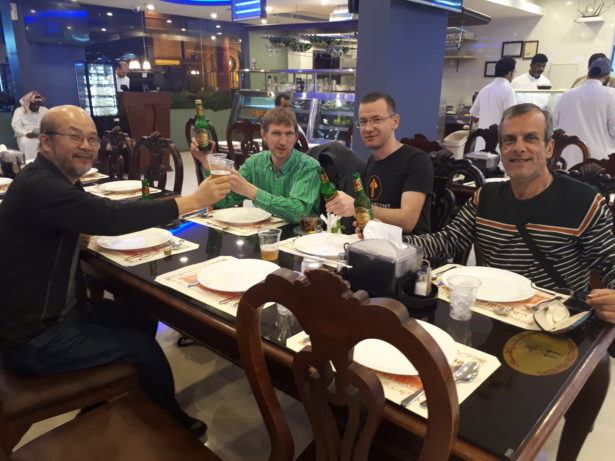 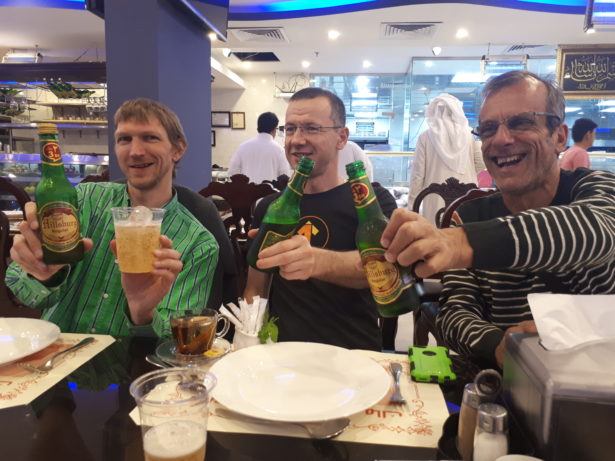 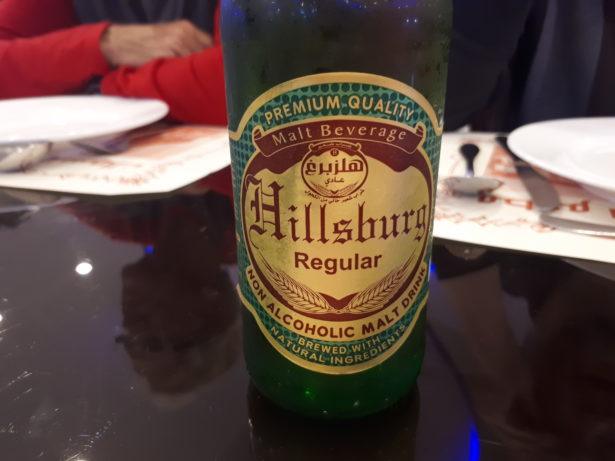 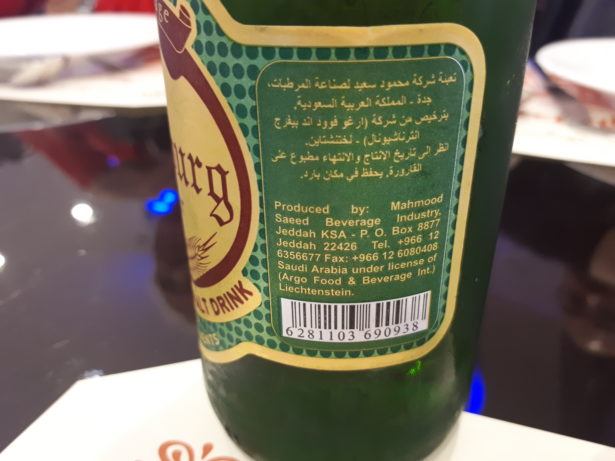 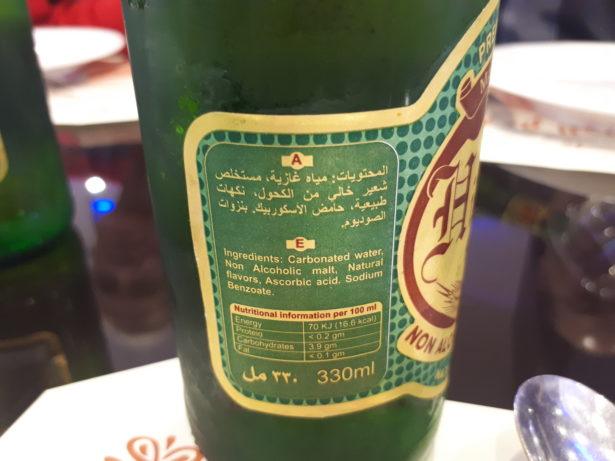 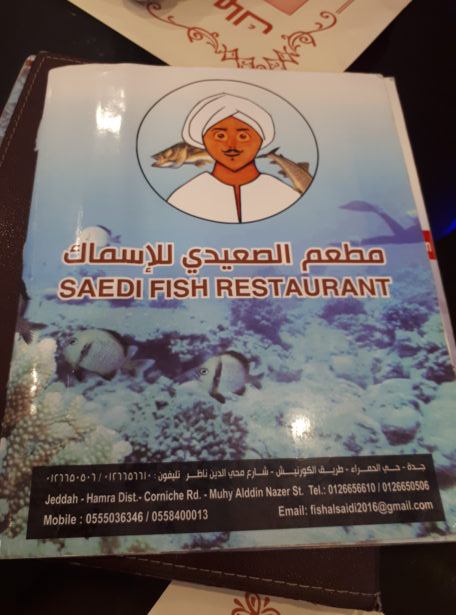 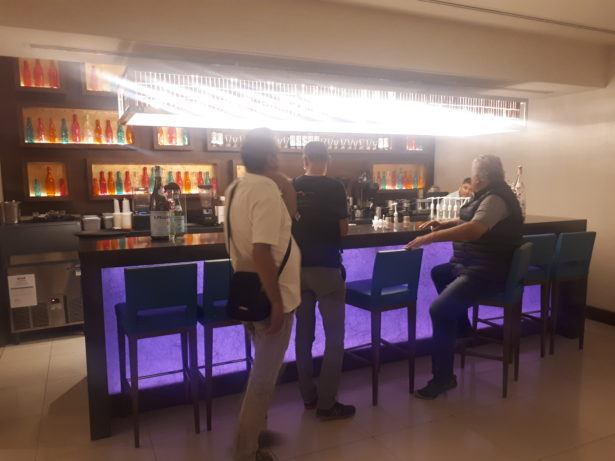 Having a Barbican in the Marriott Hotel Bar in Riyadh

6.Holsten Blackberry
On the penultimate night of our trip, I went to the local shop near our Hotel (the Plaza Inn Business in Riyadh) and bought two beers, the second of these was the Holsten Blackberry. And although I only sipped this in my hotel room while blogging, this remains the best beer from my time in Saudi Arabia. In the irony of life, as it was purchased from a shop, this was also the cheapest! 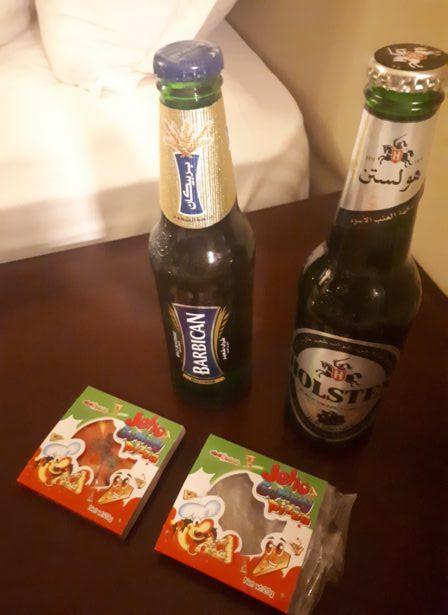 Holsten Blackberry in my hotel room in Riyadh

My final beer in Saudi Arabia was a Moussy. And this wasn’t a first time for me. I had also had these in Iraq and Jordan – they must be made in the middle east region and they come in a few flavours. This was my final beer with the lads in the Marriott Hotel Bar in Riyadh, before we headed on in life, to another adventure. 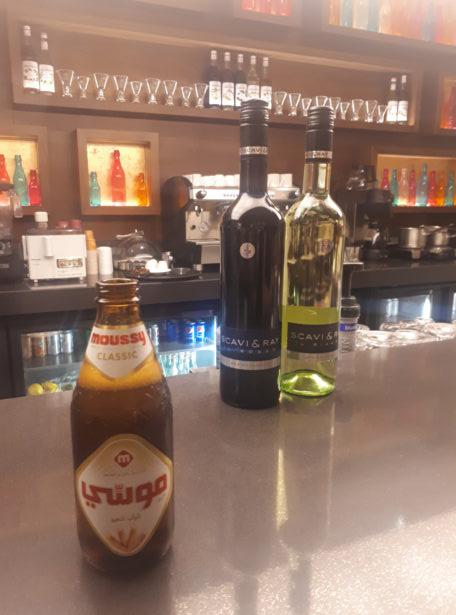 So in short, it was nice to have a 10 day break for my body from alcohol, I really should do that more often as it cleanses you somehow, but these ice cold alternatives are worth it. They had me dreaming of some delicious real beers that I could be drinking and enjoying some casino games with them. Even though I wasn’t able to gamble, I spent some time on Online Casino Bluebook reading casino reviews and brushing up on my poker skills for the next country I am in, where I can play.

How to Organise your trip to Riyadh in Saudi Arabia
As Saudi Arabia continues to develop its tourist potential, there are still no tourist visas available. However, if like me you have a work event, a business opportunity or commerce, you can get a business visa. I was there for the Hotel Show 2018 in Jeddah!  Once you have that, organise your trip with two of my partners, Young Pioneer Tours and Haya Tours:

Here is a video of my times drinking non-alcoholic beer in the Kingdom of Saudi Arabia: