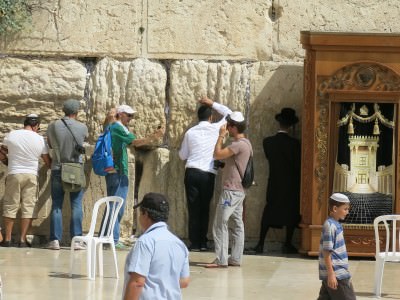 Touching the Western Wall in Jerusalem.

On my backpacking travels, I’ve done a lot of “walking on walls”, “crossing borders” and “climbing fences”. So here’s a quirky backpacking list of my Top 10 fences, walls or borders – whatever you want to call them. As humans we have felt the need to build walls to “keep out the foreigners” (copyright Paul Simon), use ridiculous fencing materials and block our neighbours from visiting just by banging up a few bricks or screws. Crazy but still worth checking out on your travels… 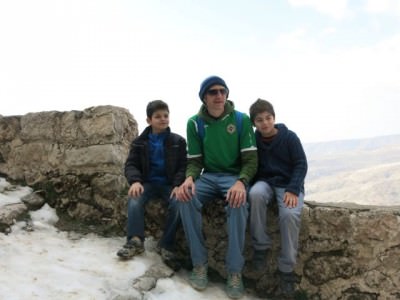 On the walls of Amadiya in Iraq.

1. Walled City of Suwon, South Korea
The impressive Hwaseong Fortress in South Korea was an epic part of my trip to the country. Recommended by my best mate Millwall Neil, I headed all the way round the walls, stopping off along the way to admire the views. Winter snow had fallen on this marvellous city and I loved the walls of Suwon. It wasn’t touristy and the views and walk are just memorable. 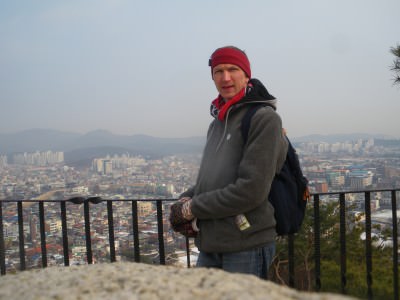 On the wall at Hwaseong Fortress in South Korea.

2. Dingo Fence in Australia
Apparently this is the world’s longest fence and longest structure runs through thousands of kilometres in Australia. Originally built in the 1880’s to help protect ranchers sheep and cattle from the wild dogs and dingos. For decades, the 5,614 kilometre fence successfully kept the herds safe, until scientists noticed that the land where the dingos were allowed to roam was actually healthier. It seems that Australia’s ecosystem needs the dingo in it. Just one of many highlights from backpacking the land down under. 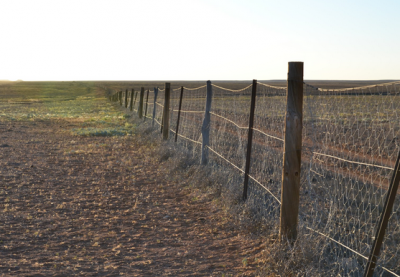 3. The Great Wall Of China
The only man made structure allegedly visible from space with the naked eye, the Great Wall of China is a large part of the Chinese culture, even today. Taking over 2000 years to build, starting in what is called the warring states period (476 B.C.- 221 B.C.) and ending in the Ming Dynasty (1368-1644). This immense wall, snaking across China’s landscape was originally began to keep the warring factions apart. During the Qin Dynasty, the wall was finally joined as one to help stop the invading Hun armies. With the joining of the wall, the Great Wall became the symbol of national unity that it is today. One thing to note – it’s touristy as hell! 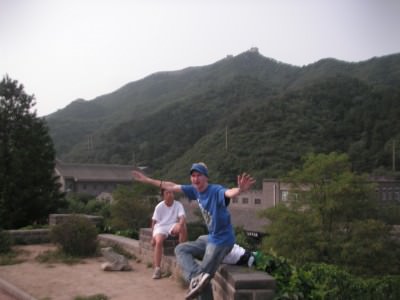 Taking a break on the Great Wall of China.

4. The Berlin Wall, Germany
On the morning of August 14th, 1961 citizens of East Berlin woke to find a large, concert wall separating them from West Berlin. Incredible. Built in the night by the Soviet Union to stop the mass exodus of it’s citizens into West Berlin, the wall stood as a testament to the differences between the Soviet Union and the western allied nations. As quickly as the wall appeared though, it also disappeared almost as quickly. On November 9th 1989, as the borders reopened in the city, the residents of both east and west Berlin began tearing down the hated wall. I’ve been a few times and always love Berlin as a modern city with a cultured history. 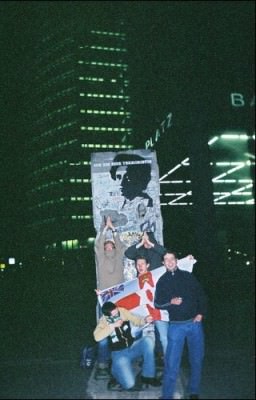 Reminders of the Berlin Wall while touring Germany.

5. Hadrian’s Wall, England
How do you keep bored Roman legions out of trouble? Have them build a wall! Building began on the wall in 122 A.D. in Britain. Almost 73 miles long, the wall runs from the North Sea, to the Irish Sea. The true purpose of Hadrian’s wall, other than to keep bored soldiers busy, was to keep the Roman soldiers safe from the invading Picts. Complete with towers and a garrison, the wall is another impressive example of roman engineering. These days it’s more touristy than to keep the Scots and English apart! 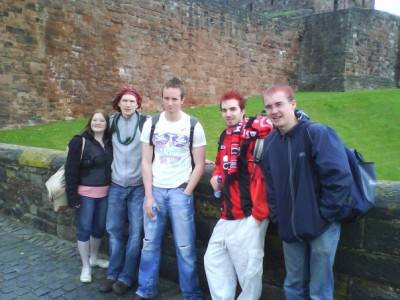 Touring Carlisle by the “border” between Scotland and England.

6. The Western Wall, Jerusalem, Israel and Palestine
The Western Wall in Jerusalem is one of the monuments of the Jewish religion – it made my top 5 sights in the city. Only a small part of the original wall that once surrounded the Temple’s courtyard on the Mount remains. Only the Temple Mount itself may be more sacred to the Jewish religion. Parts of the wall date back to the time of King Herod, while other areas have been dated to the 2nd century. The Western Wall in Jerusalem is arguably one the most religious of the world’s walls. There is a secret part to the wall with less tourists as well… 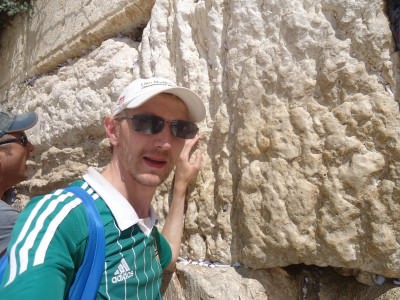 Touching the “Wailing Wall” in Jerusalem.

7. Walls of Amadiya, Iraq
While touring Iraq we visited the mountain top town of Amadiya. While only a small portion of the original walls remains, and only one main gate, the views are stunning and you really have to pinch yourself and remember – this is Iraq. I recently wrote a full guide to backpacking Iraqi Kurdistan. 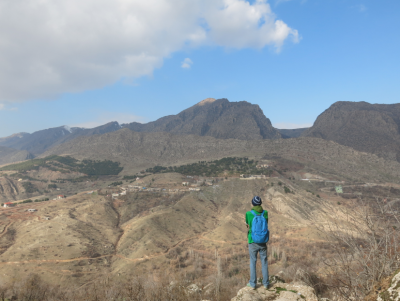 8. Walls of St. Malo, France
St. Malo has made it onto a few of my top 5 and top 10 lists as I’m fond of it. I used to work on the ferries coming in and out and loved the relaxation of this charming old city. The Walls are a joy to walk around. The French do decent coffee, beer and crepes within St. Malo’s walls. 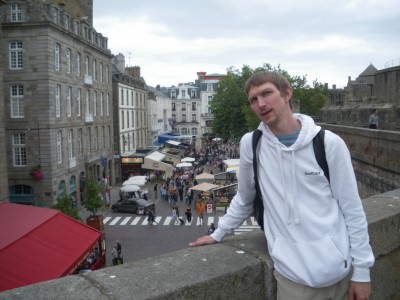 Backpacking the walls of St. Malo in France.

9. The West Bank Barrier (Israel – Palestine)
While touring Israel and Palestine we crossed the border so many times and it’s sadly a very obvious border – the West Bank Barrier was built gradually over the last 14-15 years. I toured round a load of parts and find it only serves to hem the Palestinians in and act as a sad reminder of man’s inhumanity to man. 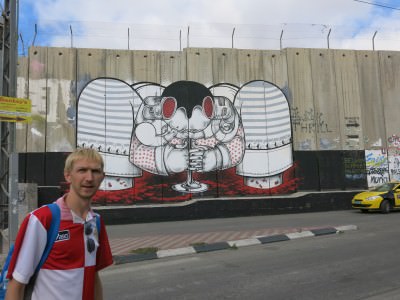 10. The Peaceline, Belfast, Northern Ireland
I’ve put the Peaceline in last as I need it in there but I don’t want to concentrate on it. If you grew up in Northern Ireland like me, you’ll be aware of the Peaceline in Belfast. Protestants and Catholics. Nationalists and Republicans. It’s my cherished homeland and I hope we find peace in this lifetime. You can get a Black Taxi tour up there if you need to see it – some tourists do visit these days. 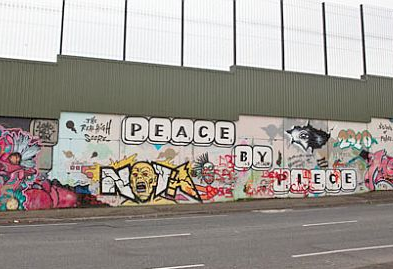 So there you go – these are just a few examples of some of the world’s famous fences and walls from my journeys. I have also been to the walls of Jericho, Harar, Akko, Londonderry and a load more. For a little different flavour, you could try the Chewing Gum Wall in Seattle. 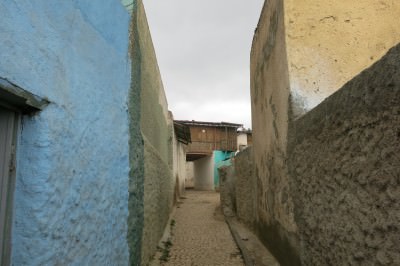 I hope peace prevails but these walls and divides do offer a sad reminder of what really happens. If you feel the need to start your own wall, barricade, fence or revolution, you can also start your own country like Austenasia.