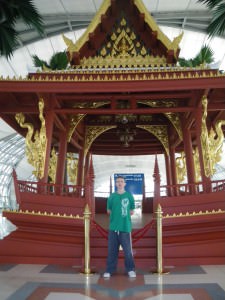 99 minutes in Bangkok, Thailand at the Airport in 2009

Hardly enough time to class yourself as a citizen, an illegal immigrant, a resident or even a tourist…but the history books do reveal that I spent 99 minutes on Thai land, albeit in transit at the airport. It was the Sunday just gone, our flight left London, England late on the Saturday (getting bags packed was mayhem…). This was the swift departure from the UK I needed and craved. After 29 years living there (6 of them in England would you believe), it was about time to move on…and I didn’t mean Bangkok to be the first port of call, but the flight transfer was there. 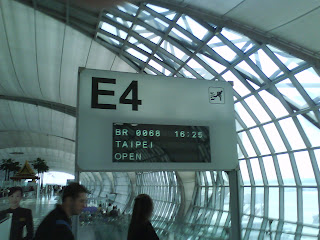 …and there it was…Bangkok Airport. We didn’t even see Bangkok. What we did do was get some water from the airport shop, and squeeze in time for a coffee, before heading to Terminal E4 with passports, boarding cards and a plastic card with “In Transit” written on it. That was for the second leg of flights, this time from Thailand’s capital of Bangkok to Taiwan’s capital of Taipei, and we were out of Bangkok before the clock reached 100 minutes. My shortest ever visit to a country I’ll believe, without counting driving through Scotland or Wales (managed to storm the mini countries of Luxembourg, Liechtenstein and San Marino in mega quick time on football days over the last 3 years). 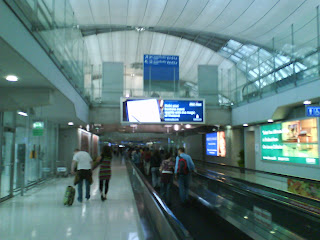 So in essence I have no advice to give on Bangkok or Thailand as I’ve never actually left the airport, but I have officially stepped foot in the country, not that its anything to be proud of, though the few photos I took merely offer a glimpse of the airport. We are now in Taiwan, I’ll update on this adventure in due course… 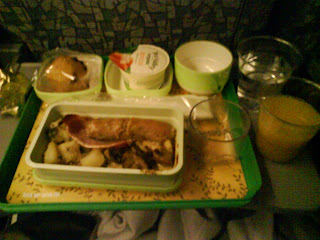 Countries Visited – Thailand (in transit only)


What I bought there – postcards, coffee and water.

…AND ASH – A LIFE LESS ORDINARY: