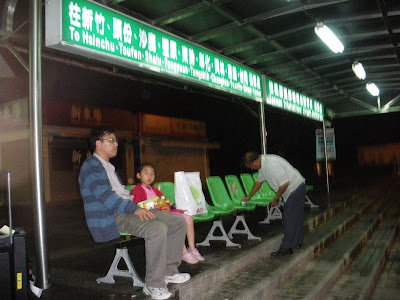 It was fitting and sentimental that I listened to REM’s 1998 hit “Daysleeper” as our aeroplane soared through misty smoky skies and landed on the island of Taiwan. The band I had forgotten about suddenly became the most important one on my iPod dukebox. I delved into the “Monster” album once again (“you know with love comes strange currencies”), but it was the line about Taipei in “Daysleeper” which caught my ear and gave an 11 year old song a sense of relevance to my life…again. 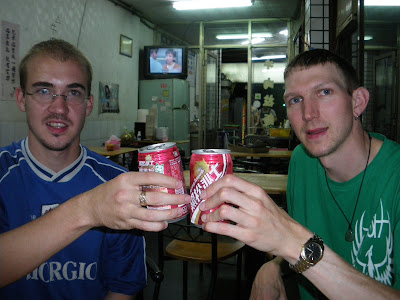 I bought the single back in 1998, at the time I was working in stock control at Tesco, doing a mixture of shifts, mainly early starts (6 am) or night shifts, and I myself became a “daysleeper” back then. The song merely mentions the city of Taipei, where I was headed and details the life of the night worker and therefore “daysleeper”, whose weary eyes have fallen into sleepy mode. Natalja and I were both feeling pretty knackered by the end of that flight. It was our second flight in 16 hours, our third country, and we had been up early the day before, and myself even having worked my last “Best Break” shift ever last Friday (I clocked out at 5pm, there ending my 4 year stint on Bournemouth beaches in summers). Circadian rhythms were in my mind and I was reliving my Tesco days joyous in the fact that particular REM song mentioned Taipei, circadian rhythms and day sleeping all in one. There is an even stranger sense of relevance for the clever reader here…REM itself, the very name meaning “rapid eye movement”, that period of sleep where we dream and are in overdrive. I won’t even mention that other REM song “I Don’t Sleep, I Dream.” Actually I just did. 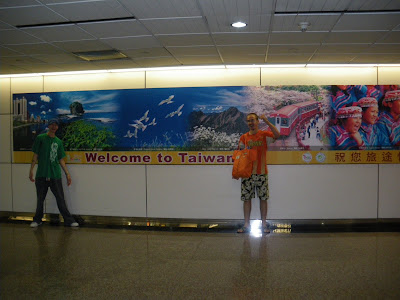 Either way we were sleep deprived but eager to see Taipei, or Taoyuan. We landed just after 9 pm before we filled in Landing cards, a 90 day stay was fine for any EU citizen, with even an option to extend this for a further 90 days. Neither of us will need that though. After picking our bags up, it was time to find my good old mate Neil. Neil has been resident in Taiwan for 11 months and was coming to meet us at the airport. After 5 minutes running around looking for him, there he was, shining bright like the opposite of any James Bond character. Bright Orange baseball shirt from the island’s “Lions” team, and in shorts, we looked slightly overdressed in the hot climate. Rain had swept Taiwan but it was still hot, and in the aftermath of the typhoon, we were happy to see Millwall Neil. I ran straight over, hugging my mate Neil, he looked unchanged from the last time I’d seen him – 11 months previous in Kent in England. Suddenly I realised I had left my UK life behind me once and for all, and here I was (here we were…) now in Taiwan ready to embark on a new life of travel, spontaneousness and daysleeping. I know exactly what Michael Stipe was on about now, video below, more updates on life in Taiwan to follow…

A SLEEPY BUS THROUGH TAICHUNG: