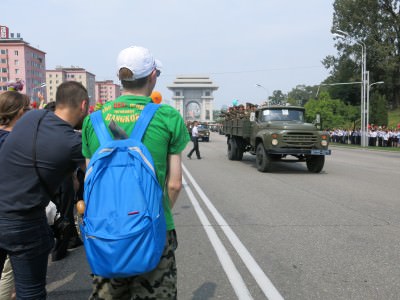 A backpacker’s guide to watching the National Day Parade in Pyongyang, North Korea.

On our DPRK adventure in 2013, we were delighted to witness first hand, and front row views of the National Day Parade in Pyongyang, North Korea!! North Korea celebrate their National Day on the 9th September and after a morning touring Kim Il Sung’s childhood home, a department store and a theatre (ticking off some of the top 99 things to do in Pyongyang), the National Day parade was underway. 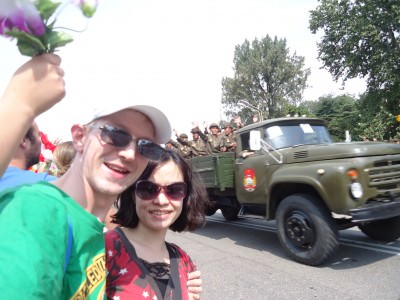 The photos will hopefully do this parade justice, this was one epic journey and the parade is completely zany. It has to be seen to be believed – in person. I highly recommend a trip out to Pyongyang. The North Korean army is the biggest I have ever seen on my travels so far. I’ve seen some massive military parades in China, but North Korea topped it. 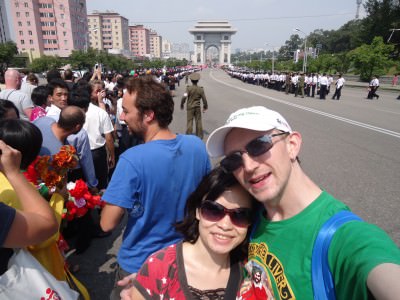 Watching the National Day parade with the Arc de Triomph in behind.

One of our cool tour guides from Young Pioneer Tours was Chris and he told us this was only the second time he had ever seen the National Day Parade, so we were lucky to catch it. Incidentally if you are thinking of heading to Pyongyang or North Korea, please get in touch with YPT and quote Don’t Stop Living to ensure you get a 5% discount (this is valid for other YPT tours as well). 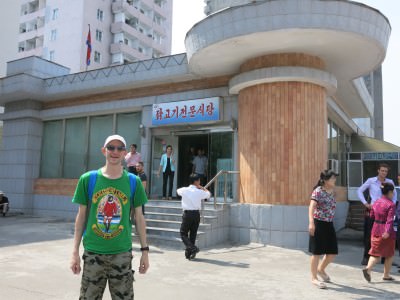 Arrival at Chilsong restaurant for lunch, just before the parade got underway.

Our bus pulls over near a “Western Style restaurant” (called Chilsong) and we get the beers in and the starters arrive. Travel in North Korea is spontaneous and unpredictable however and we get news the parade is due to start! Within minutes of sitting down for lunch, we are called out onto the main street where thousands of Pyongyangers line the main avenue leading down to the Arc De Triomph. It’s a hell of a turn out. 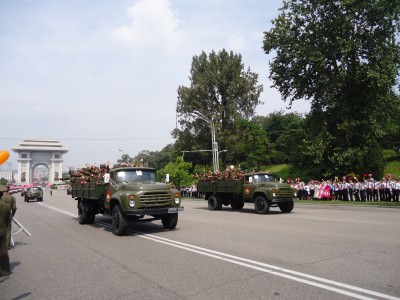 The army parade gets underway as locals line the avenue.

Where is the National Day Army Parade Held?
It’s a long parade that stretches a few kilometres through the streets of Pyongyang. The best place to view it is anywhere near the Arc De Triomph, particularly at the top of the hill as this gives a good vantage point view down on the vehicles coming up. 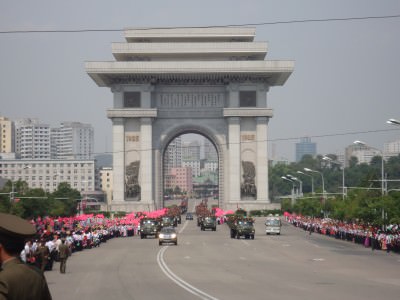 North Korea is one of those countries where detailed maps are not actually very “detailed” but the name of the street is Sungri Street. I picked up a useful map of Pyongyang which was more detailed than most. 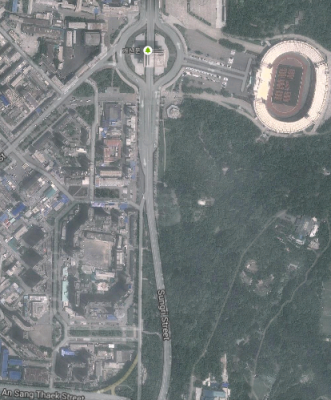 Aeriel View of the street we watched the parade from – leading down to the Arc de Triomph.

The Parade Gets Underway

The parade starts predictably with cars hoisting up massive flags of portraits of the Great Leader and the Dear Leader – Kim Il Sung and Kim Jong Il. The latter passed away in 2011, the same week I tip-toed into North Korea for the first time. 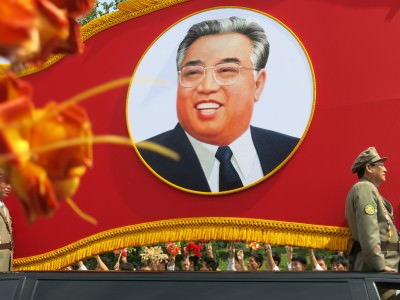 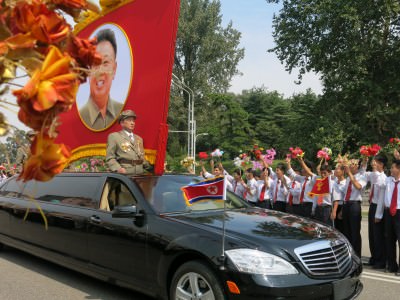 After that it’s full on Army vehicles, relentless and endless. It’s the 9th of the 9th (a day which would also see us later watch the Mass Games on National Day!) 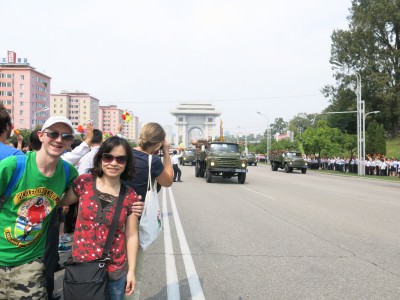 Panny in the front row for the parade in Pyongyang, North Korea

We got front row positions as the armoured vehicles began their remarkable victory parade, not to be confused with Victory Day however, which is a different parade and celebration which takes place on the 27th July each year. 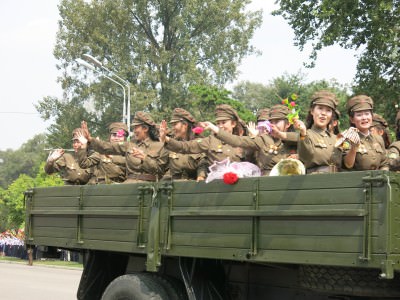 Some of the North Korean female army.

Of course recently, there was no war, it’s an ongoing act of victory and showmanship from the North Korean army to their people – this is the annual national day parade but there are many others throughout the year. Yes the North Koreans defeated the threat of commercial USA having anything to do with their proud communist country – a country they believe that the South part of Korea is still occupied and influenced by the United States. 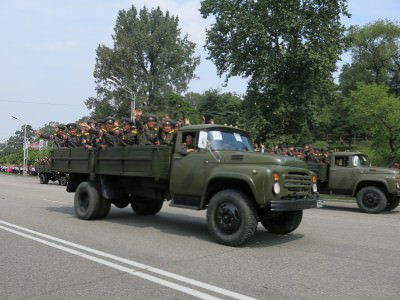 The armoured trucks are relentless…

I think we all know they are spot on with their judgements, but we hear reports of torture and starvation at the same time. South Korea is open to the world, global and has Starbucks. It has street crime. North Korea may have “political crime”, but it doesn’t have street crime – it’s as safe as houses and easily one of the 5 safest backpacking countries. North Korea in its ancient, communist world is very much a closed country. Coca Cola makes its way across the border from China, as does Heineken. North Koreans grow up loving their government and leader. But they do know what is going on outside – they just believe the US will attack them again at any time. They have Google, they have Facebook, they know who Barack Obama and David Cameron are. Of that you can be sure. 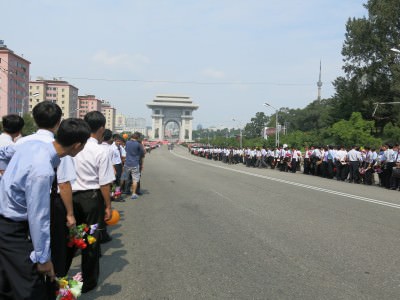 Sungri Street just before the parade got underway.

Talks, negotiations, dealings with foreign governments are all treated with suspicion by North Koreans. It is an odd place, I will tell you that much. However, this is a backpacking travel lifestyle blog so I don’t want to get involved in the political side too much though. I grew up in all that shit in Northern Ireland, I even worked on an election campaign in the 1990s around the time of the Good Friday Agreement. Then I got wise to it – I just travel the world now with no political preconceptions – my visits to Israel, Palestine, Iran, China, Ethiopia, Russia, Venezuela and Iraq hopefully show that. I tell travellers what they should see when they visit. 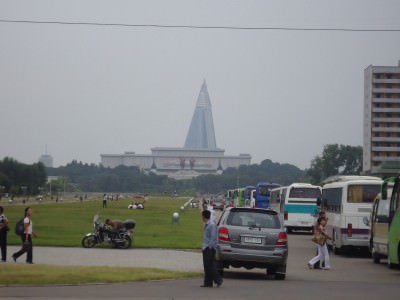 Life as it happens in downtown Pyongyang.

So What happens at the Army Parade?

The army parade is massive, it is organised, it is professional and for the casual backpacker it is a spectacle worth seeing. 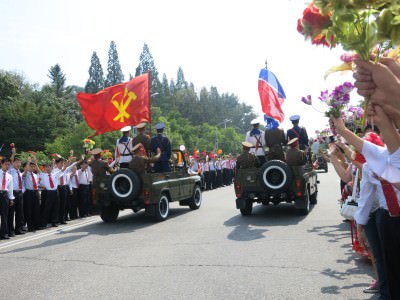 Communist and North Korea flags during the National Day Parade

Endless army trucks and vehicles drive past. All with flags of North Korea and communism flying proudly. The vehicles are packed with proudly dressed members of the North Korean army. 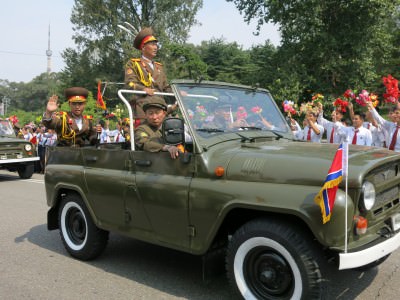 Military vehicles drive past with lots of North Korean army guys, all proudly dressed and happy.

These army guys are all happy. The people watching are all in support. They are all happy too. North Korea is a proud nation. 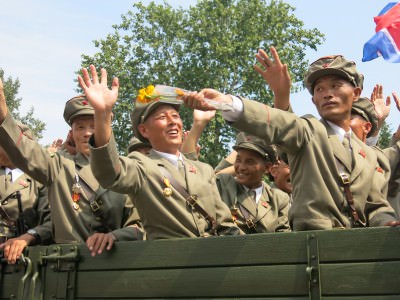 How long does the Army Parade Last?

I thought about this and I don’t have an exact answer, the cars, trucks and tanks just kept coming and coming. It must have lasted over an hour. It was relentless. It was perpetual. It was ongoing. 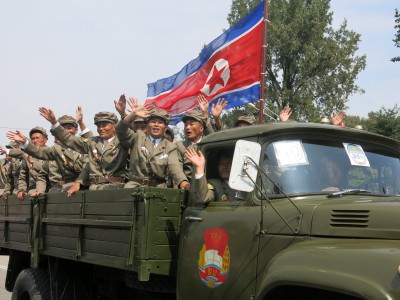 The parade lasts over an hour – it’s relentless!

The North Korean army is huge. You will not quite believe it. 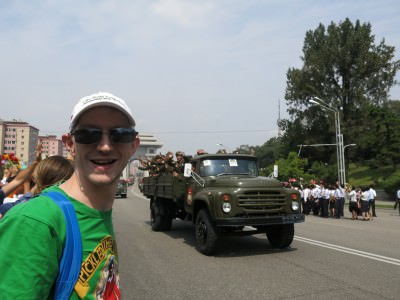 Are There Any Photo Restrictions?
This is one of the most asked questions I get when I talk about North Korea and it actually annoys me that people even ask. The truth is there are no photos restrictions that are any different from in your own country. For example – would you take a photo up close of a soldier in your home country? Of course you wouldn’t. Would you climb on the roof of a government building and take a photo? No you wouldn’t. Same applies here. 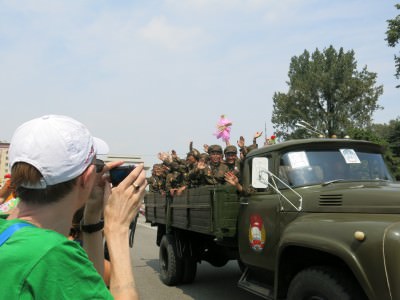 Taking photos of the parade is expected, get snap happy!

There are no photo restrictions in North Korea any different from Northern Ireland, England, United States, Australia, South Korea, Ethiopia etc. Get snap happy and take photos of the army as they pass. They expect it. 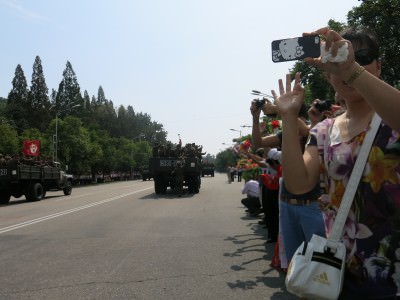 Get snap happy – everyone is taking photos of the parade!

It is mostly tourists taking the photos – but again – this is the same in every country. When I backpacked my way back to my hometown of Bangor in 2012, when I got off the train I got dirty looks from a few locals as I took photos of the station. As if I was a lunatic. Locals in North Korea are used to foreigners taking photos. In Bangor, they’re just not. 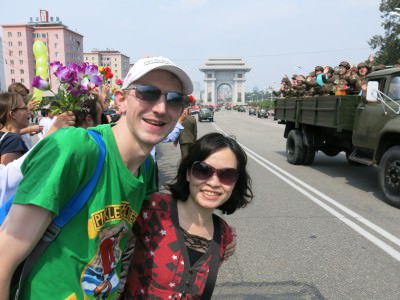 All smiles enjoying the biggest military parade we had both ever seen. 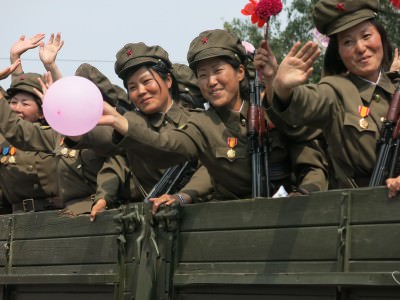 Music and speeches are intermittently played from loud speakers as the vehicles pass. There are no visible guns on display nor are there any gunshots. 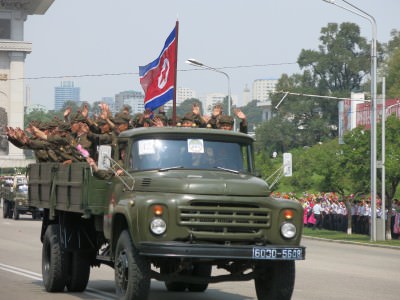 Happy atmosphere as the army parade passes by.

So yes, as well as visiting the DMZ, ticking off Pyongyang’s top 99 sights, enjoying the bars and getting the train back to China, the National Day parade was another major highlight from my time in North Korea. Make sure when you book your tour to North Korea you use Young Pioneer Tours and get a 5% discount by quoting Don’t Stop Living.

Here are my videos from watching the National Day Parade in Pyongyang, North Korea: