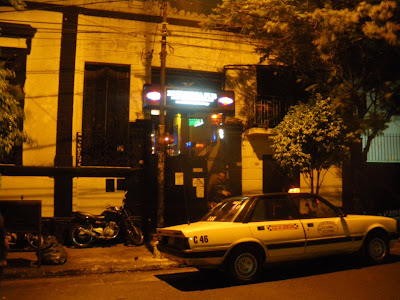 Thirsty Thursdays: A Night Out In Asuncion, Paraguay

Asuncion was my hidden gem in South America. Unknown, under mined and neglected. In fact I must admit that before I even went there I had met LESS THAN 10 people who had ever been there. This city, my friends is the capital of the proud country of Paraguay. A place I want to go back to. 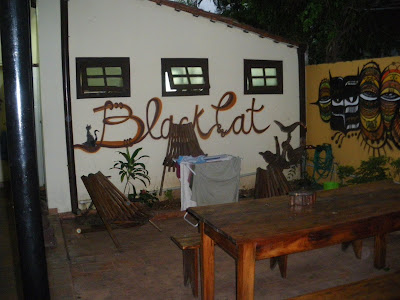 This was a special, quiet and spontaneous night out and one which was just a happy memory. Following advice from Paraguayan Javi (who I met the previous month in Buenos Aires), my girlfriend (though not at the time) Panny Yu and my fellow student Harriet Adams (who I studied with in Montevideo), I decided to stay in the Black Cat Hostel. Immediately a welcoming place, slap bang in downtown Asuncion and with more character and hospitality than you could imagine. It was in the Black Cat hostel after 5 minutes of arriving that I met Gregory from the USA and we made plans to go for a wee drink! (a busy day in my life as it happens, as I left Argentina, veered across two borders, survived the robberies bridge in the dodgy Ciudad Del Este, somehow got a bus direct to Asuncion and even managed to later find the correct bus to transfer me almost to outside the hostel itself) So I needed a beer. 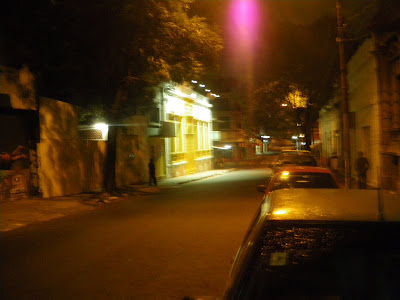 And how relaxing was a Sunday night out in Asuncion? Pretty damn good I tell you. A short 15 minute walk through dark, deserted, empty streets and we planned to visit the Britannia Pub. There were 3 of us from the hostel – which itself only had a few guests. A great wee place to stay. It was myself, USA’s Gregory (who spoke good Spanish) and Pawel from Poland. A night out of 3 adventure travellers! 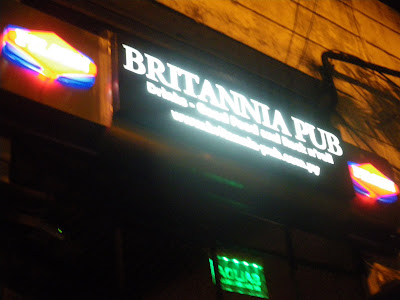 We arrived at the Britannia Pub – hardly bustling with people and on a quiet street. Unlike Buenos Aires and Montevideo, it didn’t feel too dodgy in Asuncion at night. 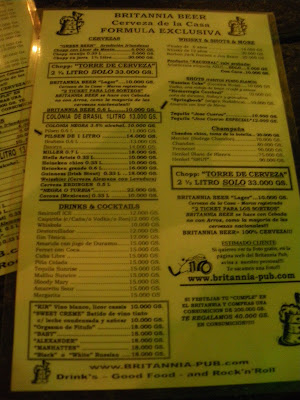 The extensive beer, wine and food menu in the Britannia Pub. 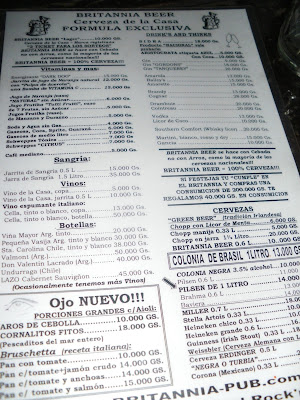 The pub itself was merely branded “The Britannia Pub” – there certainly weren’t any Brits about other than me. A nice touch. But the 3 of us stood out as foreigners.
We chose a seat in the beer garden outside in the middle. 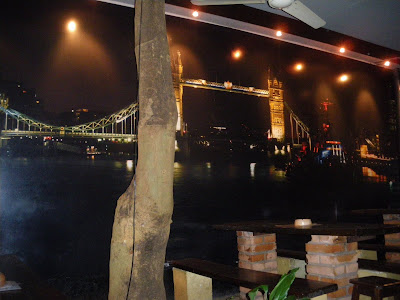 The Tower of London Mural at the Back. 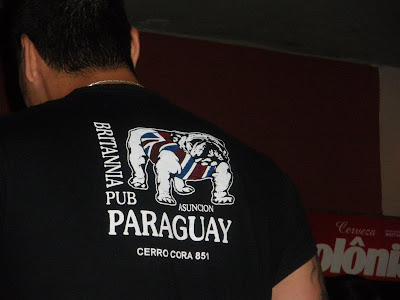 The Branded T-Shirt. Wish I’d bought one – as a traveller I like to travel light – but I love these types of wearable memories… 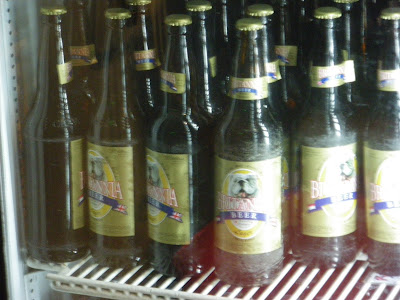 They make their own beer!! Amazing novelty to have in a place as random as Asuncion. 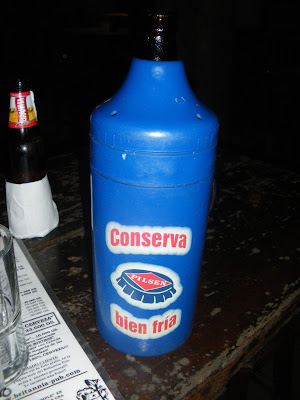 Of course I kept the label and also drank out of one the chilled containers they provide you with! 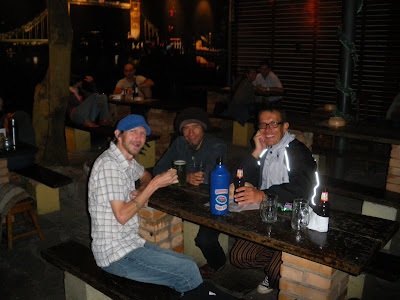 The 3 of us relaxing in The Britannia Pub. The music they played in there was really excellent and we remarked on that. From the Beatles to Pink Floyd to modern day – and mostly songs sung in English which also made me feel at home there. 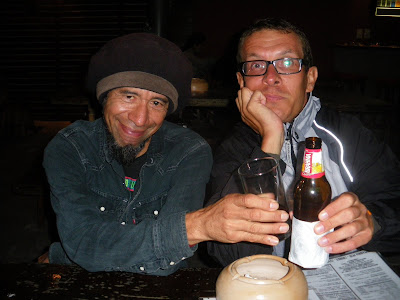 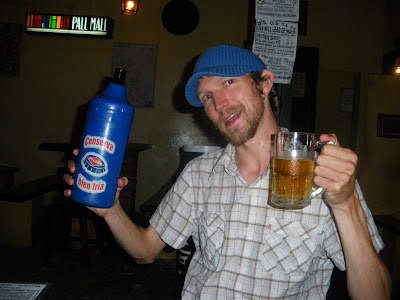 Me relaxing in Asuncion! 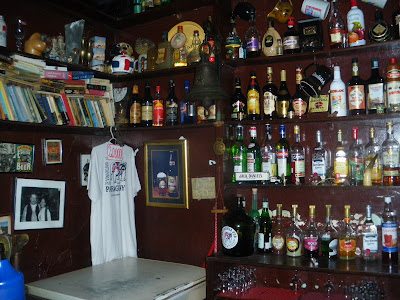 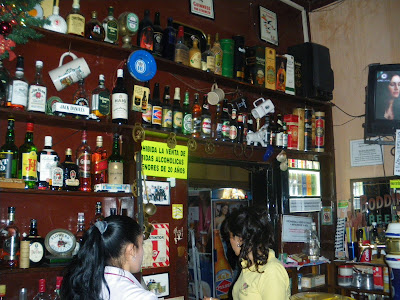 Another view of the main bar (there was also a mini bar in the beer garden). 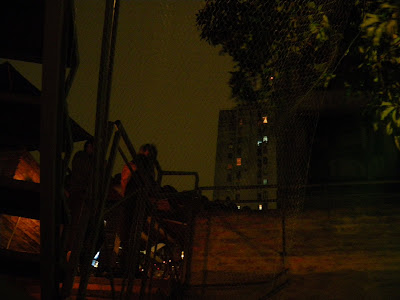 Asuncion’s night sky viewed from the beer garden. Our chat in there was excellent – we all agreed how rare and random it was to be in Paraguay, also how we were all lone travellers and therefore quite adventurous people. Pawel was a doctor. Gregory was a zookeeper, with an interest in some rare Paraguayan animals, not to be found in other places. Myself – merely fulfilling my desire to see Paraguay. I was never going to let that country slip through my fingers, especially as I was so close to it. At any rate it was a special night. 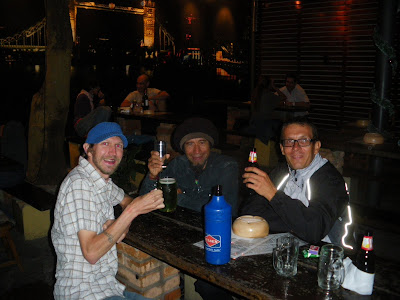 They randomly had an Irish Beer on the menu, so I bought one. Expecting a Caffrey’s or a Guinness I was surprised to see them pouring a normal lager and simply adding green colouring to it. Not a bad drop at all!! 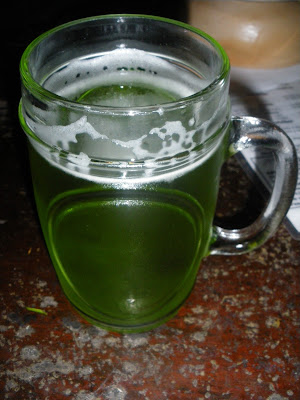 IN fact it was minty – so the shot was probably a Creme De Menthe! The only time I have ever had that type of “beer” in a pub. 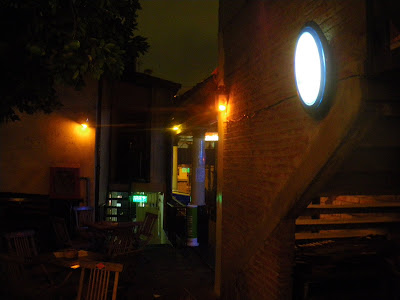 Another photo from the Britannia pub. It reminded me of a pub in Tainan where I had been just 14 months earlier – the pub was called The Armoury. It was the outdoor relaxed vibe that made me remember the Tainan Pub. 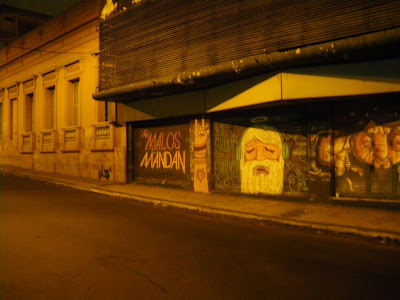 It wasn’t a late night – the bar was still open when we left after midnight. Would be great to go back there someday! Thanks to Gregory, Pawel and all in the Black Cat Hostel and Britannia Pub. The place rocks.
Beers Tried – Britannia Pub Beer, Pilsen, Cerveza Irlandes
Nationalities Met – Polish, Paraguayan, United States
A VIDEO I TOOK THAT NIGHT IN THE BRITANNIA PUB:
Join 15,017 Monthly Readers! If you enjoyed this article and LOVE travel and SAVING money, get e-mail updates from Don’t Stop Living – a lifestyle of travel! (It’s Free) 😉 Jonny

1 thought on “Thirsty Thursdays: A Night Out In Asuncion, Paraguay”