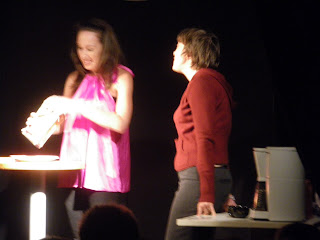 An Evening Of Shorts: Comedy in Taipei, Taiwan

Millwall Neil suggested we go to watch some “English comedy” in Taiwan’s capital, Taipei. “You’re kidding” I said, as the only people I had spoke to in the previous 2 weeks could speak no English at all. He said that he had read it in the only English newspaper in Taiwan, The Taipei Times. In there was an advert for “An Evening of Shorts” some comedy sketches and a return to the theatre for me. I’ve always liked a bit of theatre and performance (I once worked in the elegant but badly run Pavilion Theatre in Bournemouth). It would happen to be the very night we were in Taipei (well the second of two nights!). In order to get a ticket I had to send an e-mail to Sarah, one of the “Taipei Players” to confirm attendance. At the time we thought there would be 3 people going, but Natalja pulled out last minute. And there was just me and Neil. Sarah confirmed our tickets, 300 New Taiwan Dollars each (6 pounds), which included a free drink from the bar in the tiny theatre. A few days later and we found ourselves on Zhonghua Road searching for the “theatre” which was on the 6th floor of a hidden building, well at least it took us a few minutes to locate the place. 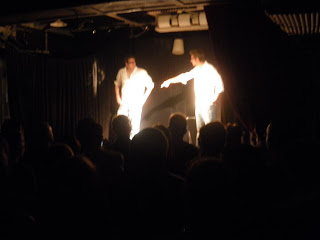 At the top of the stairs we were there, out into a music studio/rehearsal room on the right hand side and a short queue for the theatre performance on the left hand side. We were greeted with a smile by one of the actresses, Sarah, I believe and we got our tickets, including a free drink and the small A4 paper programme, detailing 5 sketches.


Here are the five “shorts” in order: 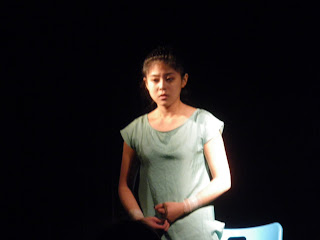 1. CLAIRE – “A monologue about an actress. Is she sane or insane? Is she wandering between illusion and reality? Or, besides all the chaos in this world, is she the only awakened one?”


In this play, there is only one person, the persona, the actress Klaire Wu. Preaching out as a plea and searching somehow for herself, Klaire keeps the audience intrigued with a mixture of singing, lunacy and clever chat. This “short” acts as the perfect introduction. I picked out a nice line “Let’s play poker with God.” 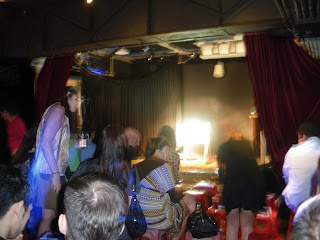 2. REPEAT – “Can one man really be held responsible for his actions? Does he learn from his past mistakes? Can he go to the washroom?”


This one has two well dressed guys, clearly mates. Both guys, wearing silly glasses, smart white shirts, blue jeans and with a North American accent are discussing one of the guy’s “personal disasters.” The guy sitting down is told by his perhaps older and wiser mate to repeat each word after him. He tries to do this, but ends up forgetting some of the words…as it goes on, he admits to being a disaster on route to ending the “short” by asking to go for a wee wee. 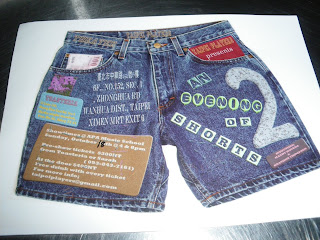 
Two women are in a kitchen preparing lunch/dinner, one of them has a potential new man, which has made the other one jealous. The other woman even knows loads of facts about the guy, as she has done some stalking/behind the back investigating. Half way through, the guy himself comes in by surprise and the women have to act differently. ON his exit they shreek in typical lady fashion as if to say “oh my God: he’s perfect!” This also gets a bit of racism into the clearly US-modelled “short”, where they mention Barack Obama, and how they would never date or shag a guy who voted for “him.” At the very end, when the lady and guy are alone, she asks him who he voted for and he says “Actually I didn’t vote, I was out of the country.” On that note the lady shows her true feelings and says “thats ok I can have sex with you now” or something of that ilk…


INTERMISSION. Short break for a drink. Neil bought me a beer, for 100 NT Dollars. Everybody went to the toilet.


4. THE HERO IN HIS KITCHEN


” ‘Hero in his Kitchen’ is a tale of friendship, romance, heartache, and personal insight into our everyday personal lives. The hero stars in the movie of our everyday life and doesn’t even wear tights and a cape. Imagine that.”


This one was one of the best “shorts” or mini plays I’ve seen. Featuring basically two guys, at different areas of the USA, on the phone to each other. It appears they haven’t spoke for years. One of the guys is phoning from a phone booth in a Texaco garage near Tuscon, on his way to LA. His mate has just got out of bed, in a dressing gown, and has got into “the movie business.” The guy at the phone booth has something really important to say, but is running out of credit on the call. Meanwhile the guy who is just out of bed thinks everything in life is great, he keeps interrupting his mate and doesn’t let him say what he wants. He clearly has a lot to say. But the guy at the phone booth is increasingly frustrated and almost out of cash. You know as the “short” progresses that the guy at the phone booth will never get round to saying what he wants, to his mate who is on an all time high. As excited as you can get on a phone call really. He ends up talking about himself loads and decides that he himself has become a hero…in his own kitchen. An interesting way to look at life, and a great play before the final “short” of the evening.


“Set in a restaurant, ‘Art Control’ is a comedy revealing the desperate measures a hungry woman is willing to resort to in order to get some vinaigrette for her salad. What happens when more than just the actors take the stage? Be ready for the many twists and turns, and expect the unexpected!”


This finished off the evening nicely, in a manner beyond human believe or reason. From a dodgy waiter in a restaurant, a woman was insistent that she wanted her vinaigrette, yet he wouldn’t give it to her, saying each time “that’s not my table.” The guy in the restaurant doesn’t seem at all bothered about his date’s vinaigrette and is casual. The waiter time after time ignores the lady’s request for vinaigrette and eventually the lady simply gets out a gun and holds it to the waiter’s face demanding the vinaigrette. Now the waiter realises what a dickhead he was and he should have just got the vinaigrette. The waiter himself then produces a gun and holds it to the lady, at which point the man dining then pulls out a gun and points it to the waiter. Within a minute, the peelers have arrived and are trying to sort the problem out. They also produce guns and suddenly everyone on stage has a gun. It gets even more crazy as they begin a debate over words v weapons. The twist then comes when a member of the audience just 2 rows in front of us then gets a gun out. It does show how people change their opinion and outlook on life when a gun is brought into the equation. Its more powerful than words, as the play shows. Another two audience members shockingly also get guns out, I had to assume it was all pre-arranged. At this point I wished I had a toy gun in my pocket and I’d have got it out as well and pointed it at them all. I didn’t unfortunately. Soon the guns were away and the performance was over. An Evening of Shorts in Taipei was over.


It was thoroughly enjoyable, afterwards we chatted to Daniel, Sarah and Mandy. I think all three were Canadian (hope I’m right) and it was very cool to be able to mingle with the “stars” and directors of the performance. The next day I would leave Taipei and Taiwan behind, but I still joined their mailing list and Facebook group. The “Taipei Players” are still performing, and Millwall Neil may well have seen them since, as I’m writing this a month or so after the actual night out. Anyway here’s all the details. Thanks to the Taipei Players and our Scottish bar man for a fun afternoon/evening out.


What Was It? – An Evening of Shorts 2 (a series of short plays in English)


Entrance Fee – £6, including one drink


THE SHORT VIDEOS I TOOK OF “AN EVENING OF SHORTS”:


THE HERO IN HIS KITCHEN:

VIDEOS AND PHOTOS TO BE UPLOADED WHEN I CAN!

3 thoughts on “An Evening Of Shorts: Comedy in Taipei, Taiwan”