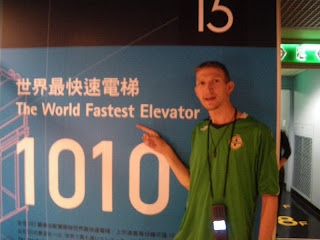 Backpacking in Taiwan: Going to the Top of The World’s Tallest Building Taipei 101

I have been up many tall/high buildings before (Empire State Building, USA; CN Tower, Canada; Sky Tower, Auckland; Scrabatar, Northern Ireland), but never in the world’s “tallest” building. Taipei 101 was finished in 2003 and claims to be the world’s tallest building (of any description). It is certainly by no means the world’s “highest” building – that would belong to a house half way up Mount Everest I’d have thought. CN Tower in Toronto claims to be the world’s highest “tower”, while in Kuala Lumpur, the Twin Towers of Petronas claim to be the world’s highest buildings. In Dubai, they are currently building a very tall structure. But for one moment last month, at least I was at the top of the world’s tallest building, or at least as far up it as a member of the public could go. Here’s the experience of Taipei 101. 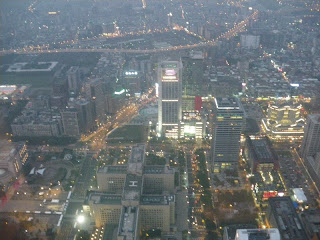 Jenny, Neil and I arrived at the Taipei metro station called “City Hall.” There was no hall there and no city. There probably was both but I was too busy looking up at the sky for the sighting of Taipei 101. On exiting City Hall station, there was supposed to be a free bus service direct to outside of Taipei 101. But the queue was massive and there were no buses in sight, so we decided to walk. We walked for a few streets past engineering works and could finally see the 8 levelled shape of the sky piercing building looking down on us. We got to the foot of the building, and I could see a massive shopping centre. 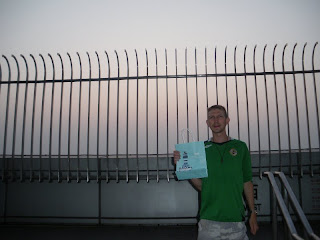 The shopping centre is the first 5 floors of Taipei 101. Its very commercial there and very different to the rest of Taiwan. No street vendors cooking away, this area could be in New York. The building itself somehow doesnt fit with the whole Taiwan culture. For such a small island to hold the honour of having the world’s tallest building is something of an over achievement. Its some building I tell you. In 8 sections for luck, the building towers high and mighty over all the others in the area, fooling us with its height. “It cant be that tall says Neil” commenting that in New York, the MP State “looks taller” just because there are other tall buildings around it. This one here in Taipei, stands alone. I’m not sure how to describe the shape, so I won’t. Check out the photos or go there and make your own description. 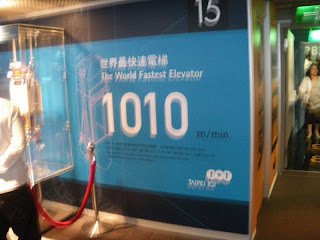 At any rate I liked it, and was eager to do what I always do: pay a ridiculous amount to climb to the top. In this instance the sum of 400 New Taiwan Dollars. That works out around 8 pounds in UK Sterling. When you’re in Taiwan you kind of have to go up to the top of Taipei 101. Neil and Jenny had already been to the top before and so on this particular day I was going up alone! I got lost on the way in, the actual observation deck entrance is on floor 5 of the shopping centre. If you don’t speak Chinese Mandarin, its not obvious. After going up 5 ascalators you find yourself walking past an out of place expensive Italian Restaurant on white tiled floor, where at the end, shiny happy people stand and welcome you at the pay point. 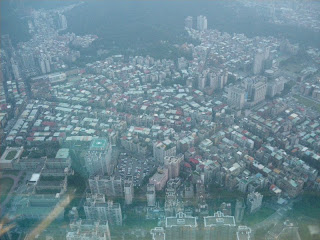 You pay 400 dollars (which includes the radio guide) for a nice looking ticket and you wait in line for an elevator to take you up to the top. Not just any elevator mind you. The worl’s fastest elevator. Or as I call them – lifts. 40 seconds it takes to go from floor 1 to floor 89. You cant see out of it. You probably wouldn’t want to. Any wisdom from Taiwan resident Neil Macey?? Yes of course, watch the video below in which Neil details the reason for the 8 sections and the reason for the shape of the building. Apparantly its meant to be in the shape of some kind of giant bamboo stalk. Which kind of makes sense. I had eaten a lot of bamboo shoots in Taiwan. The reason for the 8 bits stems (pun) from the Chinese word for rich sounding like 8 and the fact that if the building has 8 parts it will bring richness and luck. A nice sentiment and something to keep you thinking as you reach the top. 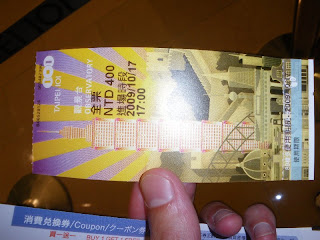 Its very dark at the top, or floor 89 where the lift ends. We pick up a brochure in English and a free radio guide (in English also!). From there it is a massive room which you can walk round. The building has facts and information everywhere, it serves as a museum and you dont have time to read it all and take it all in. What you are aware of is that the building itself is 508 metres high, more than half a kilometre! It began in 1997 and was finished in July 2003. The official name of the building is actually “Taipei International Finance Centre 101”, hardly the elaborate or impressive title you’d expect from the world’s tallest building, but it will have to do. 101 comes from th enumber of floors it has, although the public can only get as far as floor 91, which I did. 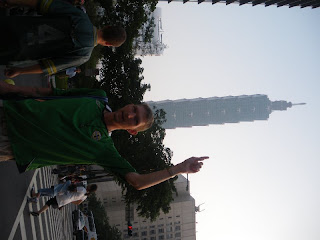 There are bars, restaurants and shops, yes even 89 floors up. There is also a place to make a stamp, and I stamped my passport and the 3 postcards I was sending with a stamp saying “Taipei 101 – World’s Tallest Building.” I bought those 3 postcards and relevant stamps in the shop on floor 89. I resisted the extortionate price of a coffee or a beer though! I also met a Malaysian guy while I was writing the postcards. I explained to him that I was off to Kuala Lumpur next. He spoke briefly to me about things to do, which I made notes on, and wished me all the best. It was a sign of progression and the next step. As was the next couple who I spoke to. They were from Australia and told me I could get a job there easily. It was life leading me onto the next step, and from the height of 500 odd metres. 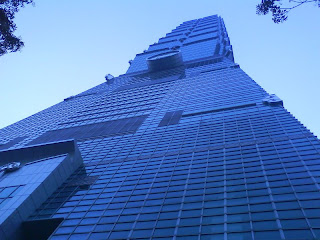 From floor 89 to floor 91 you have to walk up steps. A cold, smoggy sky with gusting wind welcomes you on exiting. It was Empire State Building all over again. I felt that same breeze and emotion. Looking down on the world was floor 91 is much better. You’re out in the open air, fenced in but loving it. You could just sit and relax there. I did for all of 10 minutes, getting the odd photo or video and enjoying the life of world from its tallest man made point (not the nighest – remember the house on Everest!). 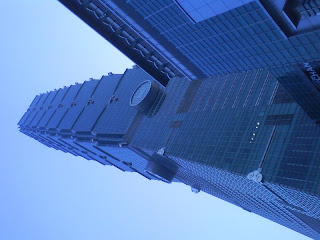 I timed it spot on, getting to see the view both in day and at night. I was up there from 4.30 pm, and it gets dark in Taipei around 5.30 pm in October. It was nice to see both views. The lit up city looked Western and vibrant. Hoardes of yellow taxis and motorbikes were still clear and noticeable at night. Even with that awful Asian smog. I needed a wee wee and so I used the world’s tallest based toilet. Another “had to be done” thing. I didn’t want to linger too long and have no mobile phone so had arranged to meet Jenny and Neil at 6 pm. They waited by the fake Statue of Liberty monument on the near corner by an ice cream shop, where they ate. Within 40 seconds I was back down to the bottom and just to even things up, I got lost again on my way out and ended up walking through the shopping mall, 5 floors down and I was back in the madness of Taipei City. I had just been to the top of Taipei 101. It was good. It was high. It was fun. 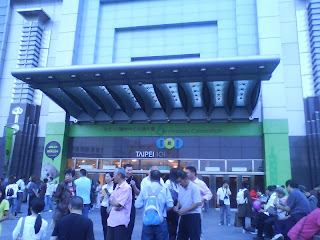 AT THE FOOT OF TAIPEI 101, WORLDS TALLEST BUILDING:

DARKNESS AT TOP OF TAIPEI 101:

4 thoughts on “Backpacking in Taiwan: Going to the Top of The World’s Tallest Building Taipei 101”