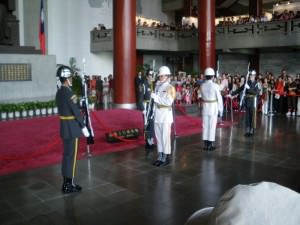 Taipei Changing of the guards 2009

OK its a joke and a ridiculous pun. Something that in 2004, either myself or Lock In Lee would have been proud of. “What blood type are you?” someone asks. “I’m blood type A” I reply. Without the pun, I ended up in Taipei for the final leg of our Taiwan adventure. I had avoided the capital city completely up until this time. Even on arrival, we flew into Tauoyan Airport (or Taiwan International Airport), 40 miles from Taipei itself. It was going to be very different to the rest of Taiwan, as I predicted myself but had also been reminded by Neil and Natalja and Eva. Capital cities are often not a good judge of the country’s culture. You’ll find the opposite in Belfast however. Yet this was the Taipei trip. It began at 5 am at Neil’s house on an October Saturday morning. We hadn’t been to sleep, we had spent the previous night Shrimp Fishing and having our final Shinying beers in the “Ocean Every Day” pub. At 5 am we boarded a bus which would be DIRECT to Taipei from Shinying Ring Road (the U Bus station beside the 7.11 and opposite the McDonalds). It was the sleepy bus. I bought a scallion cheese bread and a tea and as we left the city of Shinying and our memories behind, I drifted to sleep amid Liam Gallagher chants of “life is a time machine…up on a silver screen.” I slept all the way to Taipei and we wearily got off the bus in a very new and clean bus terminal. It was Taipei Central. 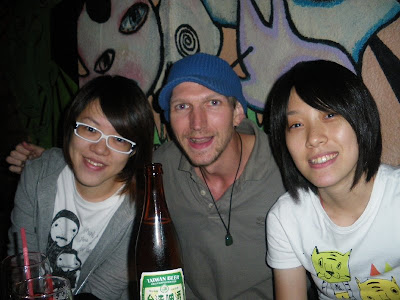 Millwall Neil, like myself specialises in random ness with a hint of pre-organisation. This tactic in life is a Godsend, as was our decision to book the hostel nearest the train station. We were tired but ready for the big day out, providing we could leave our bags at the hostel and get showered and changed. The day before Neil had phoned up Taipei YHA and book 2 beds in a dorm. Excellent decision. Within minutes of exiting the bus station, we had dandered past the metro station and up through a busy Saturday morning rush at the train station and underground shopping centre. Up endless stairs with heavy bags and then out into the open air of Taipei. In front of us stood a large building full of offices and random flats. Floor 13 of this building was to be our lucky hostel. A great wee place. We left our bags there, used the bathrooms and showers and would have to come back later to check in, as it was only 10 am or something. After ditching the stuff, because we were so tired we needed a boost. Neil’s suggestion was to go to the Hot Springs! 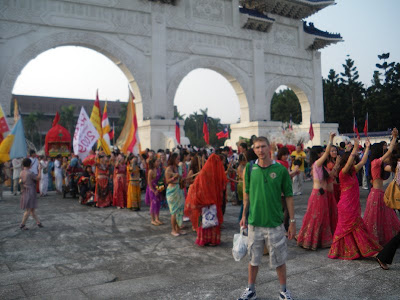 I was certainly up for that idea. A few days earlier Natalja and I had gone to the Hot Springs at Kuan Tzu Ling and it was pure relaxing and freedom. Neil’s idea was supreme and I couldn’t have thought of a better thing to do. We grabbed our swimming shorts and towel and headed off to the Hot Springs. First it was time for a quick munch on the move and some water. Unfortunately on the Taipei Metro system it is illegal to eat or drink (and even stricter in Singapore/Malaysia!). I picked up at metro guide and it was my first time on the Taipei metro system, which we would use quite a bit over the next 2 days. It had the same system as in Kaohsiung, where you pay to get a blue coin and this is your ticket. The coin, one way costs about 30 pence I think, maybe even less. The trains are clean, frequent, busy and impressive. We got on the red line at Taipei Central and were heading towards Danshui (which has a beach). This was the furthest north I ever went while on Taiwan. We changed trains at a stop called “Beitou” and it was simply one stop north to a mountain valley stop called “Xinbeitou.” You could see the mountains and forests in the background. The route there had taken us through lots of city suburbs in Taipei. We walked along a main road and junstion then up a hill where Neil said “they have Hot Springs here for 40 NT Dollars.” I didn’t quite believe him. We had paid 300 NT for the King’s Garden Hot Springs in Kuan Tzu Ling a few days earlier. That was 6 pounds. The one Neil knew about would be around 60 pence. 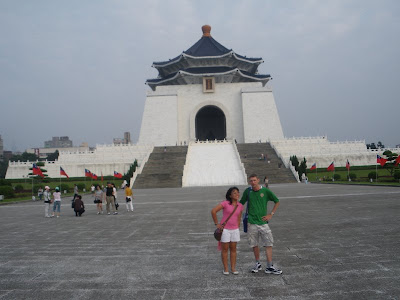 Of course Neil was right. Not only that but every single other Hot Spring we walked past was so much dearer, Neil had found an unusual bargain here and I was most grateful for the 60p for an hour or so of Hot Springs, and a free shower! The Hot Springs was half way up a hill and had a sign saying “Millennium Hot Springs” at the entrance. On the way up there we had passed a park, Beitou Park Number Two it called itself. There were some ponds there with Lotus leaves. Then for the princely sum of 40 NT Dollars we were swimming in the Hot Springs. This one was murky grey, and had 5 pools. 2 cold pools and 3 hot pools. We spent most of our time in the 2 coolest of the hot pools, but I also enjoyed one of the cold pools to refresh. There we met some Westerners! An English guy from London, a Chelsea fan who had noticed Millwall Neil’s Millwall tattoo, and his girlfriend from Philadelphia in USA. By total coincidence they both worked for Shane English School, the same company as Neil! After an hour or so soaking in water, we were ready to head back into Taipei Central, where I had arranged to meet my friend Jenny. 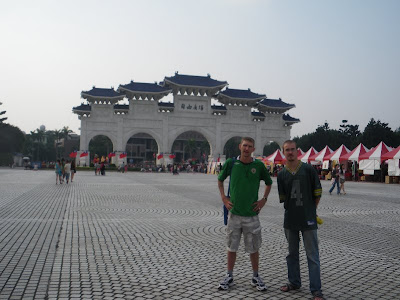 Jenny is a lovely Thai lady who I met while living in Bournemouth. I met her first when dressed as a frog for my mate Maxime Froger’s (The Frog) leaving party a few months before I left England. Jenny was to be studying in Taipei, Taiwan and we kept touch and arranged to meet. It was another exciting part of the trip. Neither Neil or I had mobile phones and so we had said 2 pm outside the main ticket office at Taipei Central Station. We thought that would be obvious. After a nervy delay, we finally met up with Jenny! Wearing a pink top, coupled with our two green tops, we were off on a tour round the city! Not before we stopped for food, in the restaurant area in Taipei Main Station. It was one of those food areas, where you can sit with your mates but order anything you want from any outlet. Its much more relaxed in Taiwan. English people would frown at the idea. That British poshness and attitude is something I grew sick of, especially in Bournemouth. So I opted for Japanese food, of all possibilities. For less than 2 pounds I ate like a king. A starter of seaweed soup (tasted just like water direct from the ocean to be honest) and a beef carrot and egg mix. In Taiwan it really was amazing the amount of different foods I tried. I surprised even myself. 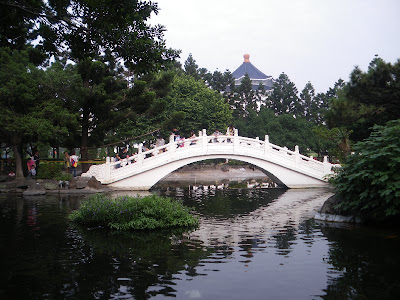 After the food it was time for some spontaneous and important sightseeing. Using 3 things we set about seeing the sights. Those 3 things were: Millwall Neil, Pimnipa Jenny Pinnatthanachai and my Lonely Planet Guide. For sure on the list was Longshan Temple, Snake Alley and Taipei 101. As the day grew older it became obvious that Longshan and Snake Alley could wait until night time, where we could also visit the night market at Huaxi. This gave us the chance to do the Chang Kai Shek Memorial Hall (and surrounding gardens and theatre) and also for me to go up the world’s tallest building (at the time of writing, though in Dubai they will bate it), namely Taipei 101. From our venue of lunch, we headed on the Metro system just 2 stations south to Chang Kei Shek Memorial Hall. First we saw the incredibly beautiful buildings, of which the quiet, lonely theatre first caught our eye. Nobody went near it. It was mid afternoon. Probably around 3 pm. 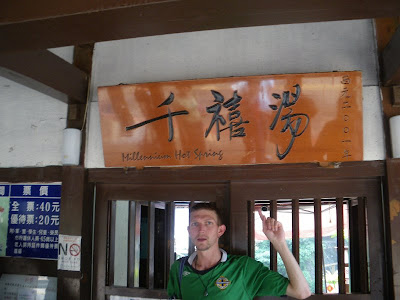 The gardens behind the theatre featured the Chang Kai Shek Memorial Hall and Gardens. We walked past the open aired corridor of proud Taiwan flegs and there at the top of concrete steps was the open building. General Chang Kai Shek was the former dictator of Taiwan. His army, the Kuomintang almost single handedly defeated the Japanese. The Memorial Hall is a class building. White walls and a blue octagonal roof, at the top of these steps overlook pretty gardens. Incidentally there are 89 steps up, representing Chang Kei Shek’s age when he died. Not a bad innings that for a dictator. You’d find Mussolini, Hitler, Stalin and Franco turning in the graves to check the statistics. Inside the hall, there are artefacts on the wall and a large statue of the man himself on the back wall. There is also entry to a museum, which we didn’t go into.


After this it was time to go to Taipei 101, the world’s tallest building. Neil and Jenny had already been up it, so they didn’t want to go up again, but I went up it, while they waited patiently. I’ve written another blog post on that alone anyway for you to read. After the Taipei 101 experience, we decided to go and see the famous Longshan Temple. A massive temple, and we picked a great time to visit – it was very busy, lively and the scenes around the temple made it an interesting trip. 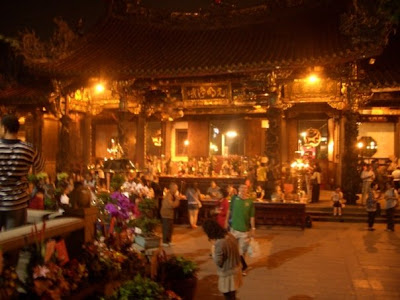 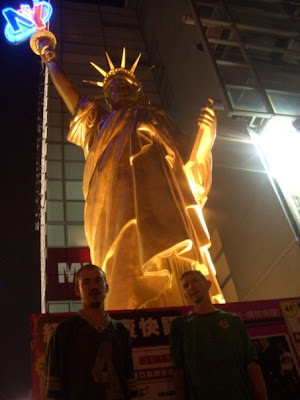 We saw a random live magic show in the grounds of Longshan Temple. The guy doing the tricks was fantastic. Disappearing birds, cages and lots of stuff up his sleeve. I made a wee video of that, though we weren’t right at the front. He was definitely entertaining the crowds. From there we ventured past the fountains, in the grounds of the famous Longshan Temple. It was probably the biggest temple I have been to in Taiwan.
Videos to be added soon!

Aside from Longshan Temple, we saw Huaxi Night Market, Snake Alley, Live Music in Chang Kei Shek Park, the Chang Kei Shek Memorial Hall, 5 live Plays (in English) in a small theatre, 3 Taiwanese Rock bands in a club called The Underworld, Live Magic Show, Changing of the Guards at Sun Yat Sen Memorial Hall, Ximen District and a host of things un-mentioned. Until next time, I’ll save up the best moments of the Taiwanese  Capital City, which was actually one of my least favourite places on the island of Taiwan, although it was still a great place to visit!

A BUSY TRAIN AT TAIPEI:

CHANGING OF THE GUARDS AT SUN YAT SEN, TAIPEI:

THE REST OF MY TAIPEI VIDEOS ARE OF ROCK NIGHT, THE PLAYERS PERFORMANCE AND TAIPEI 101. These are on separate posts.